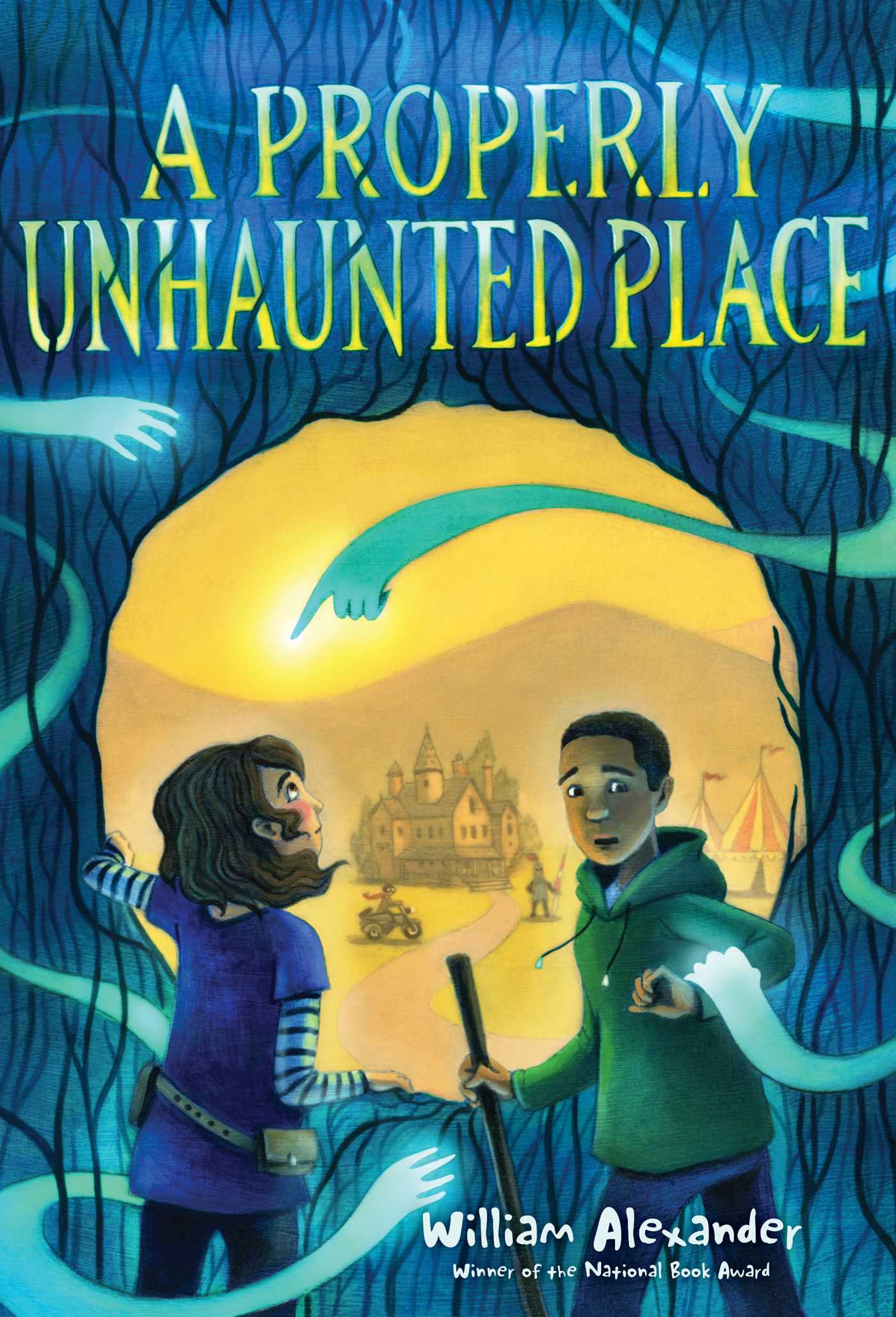 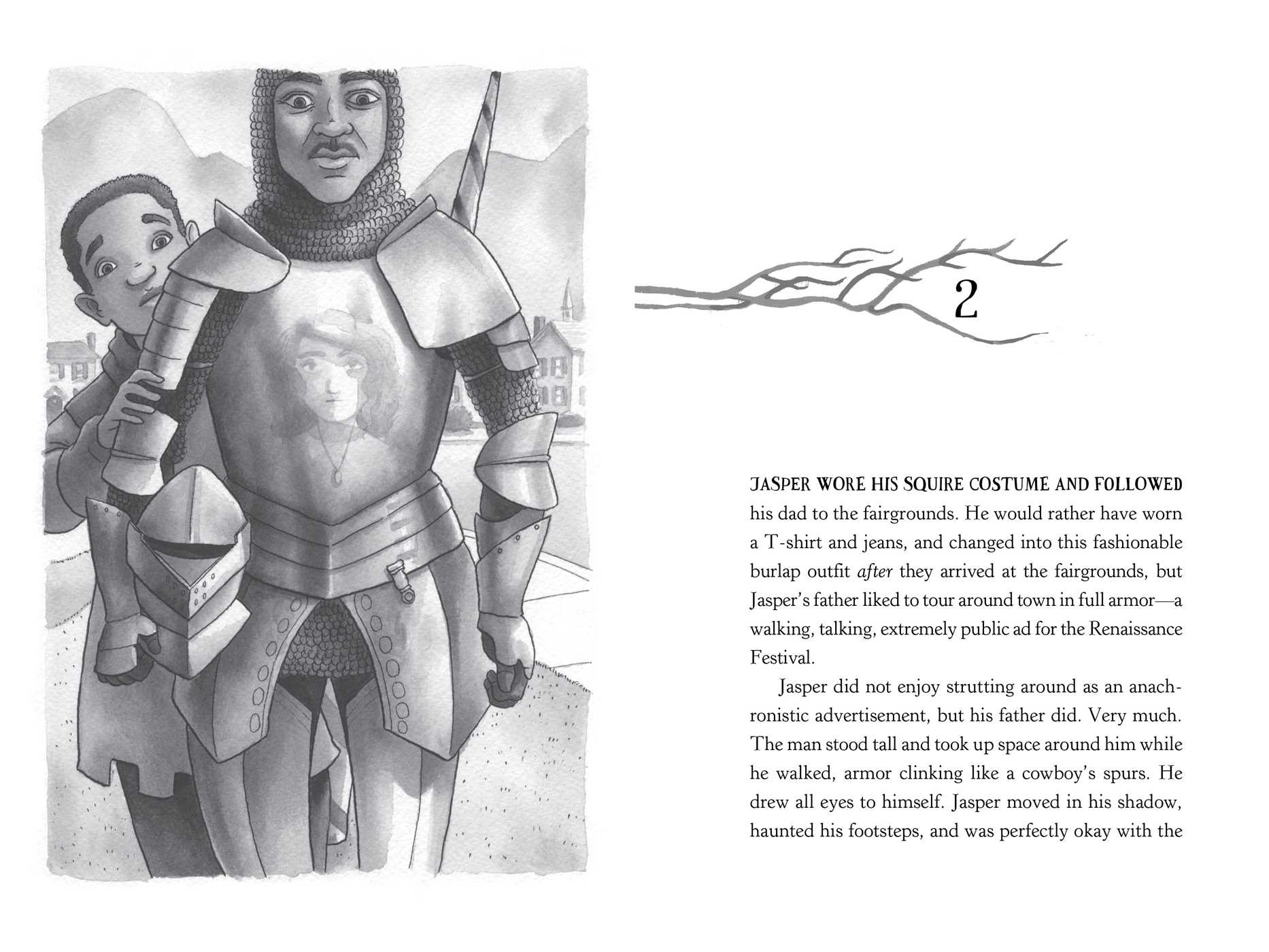 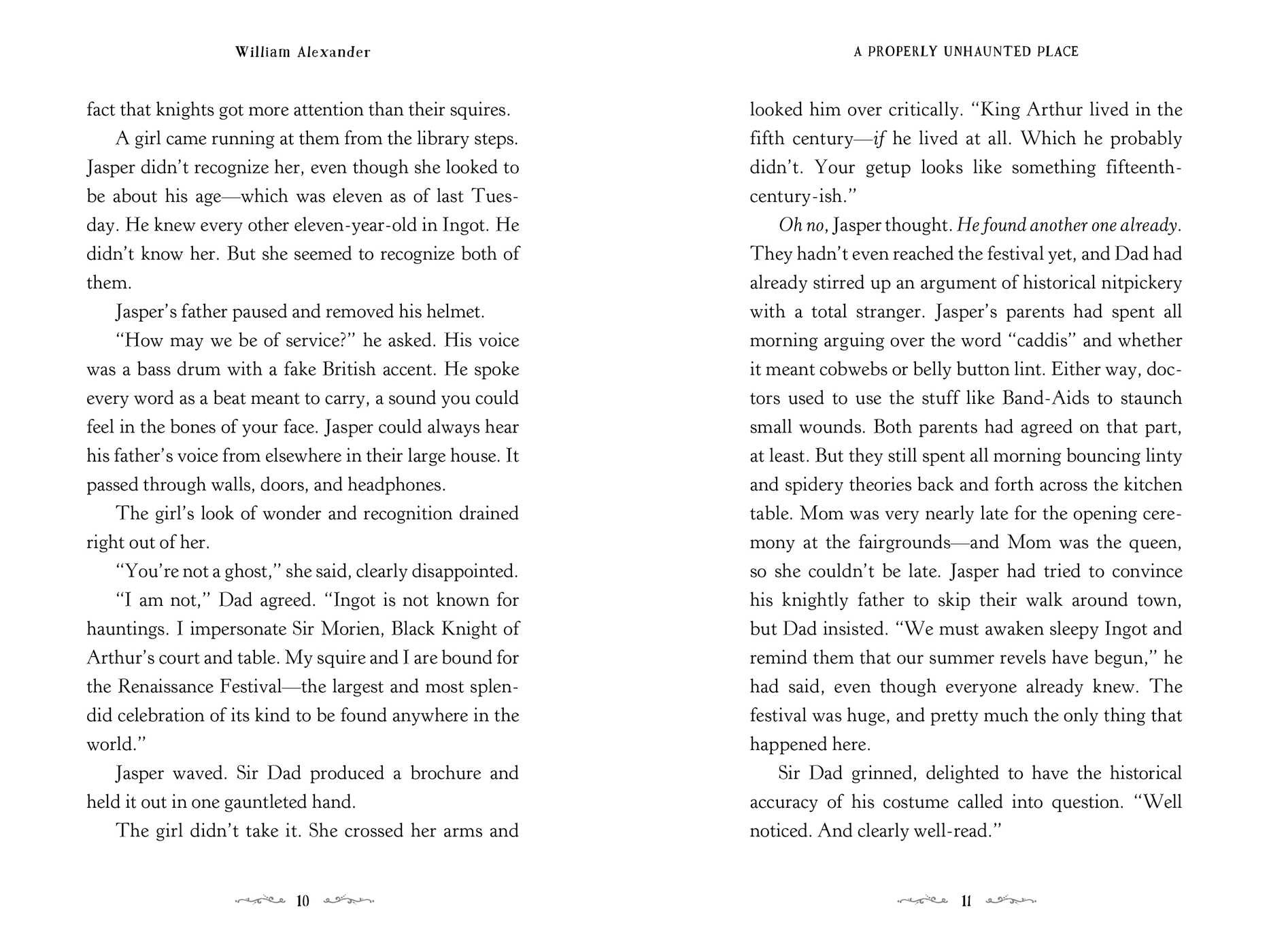 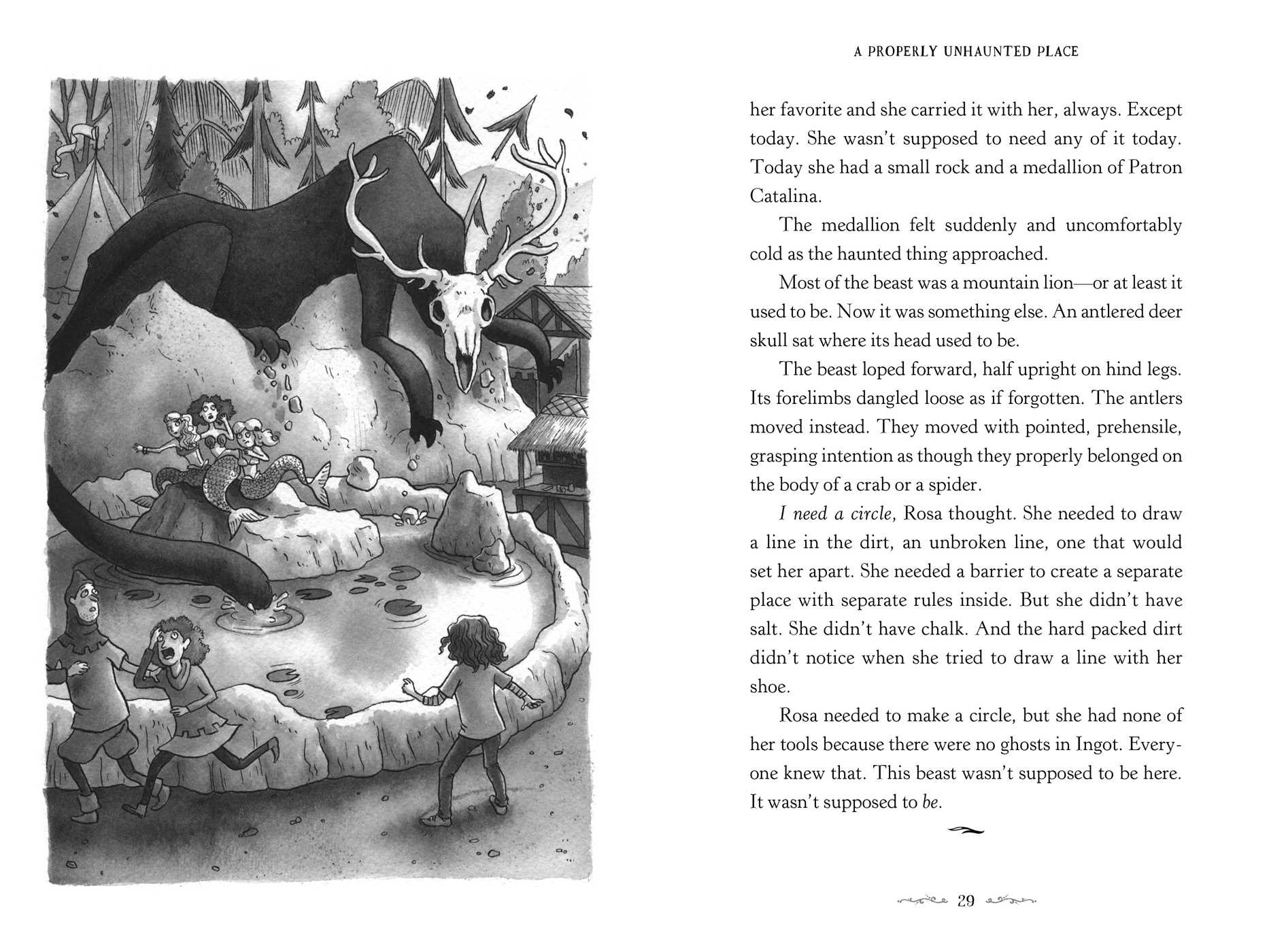 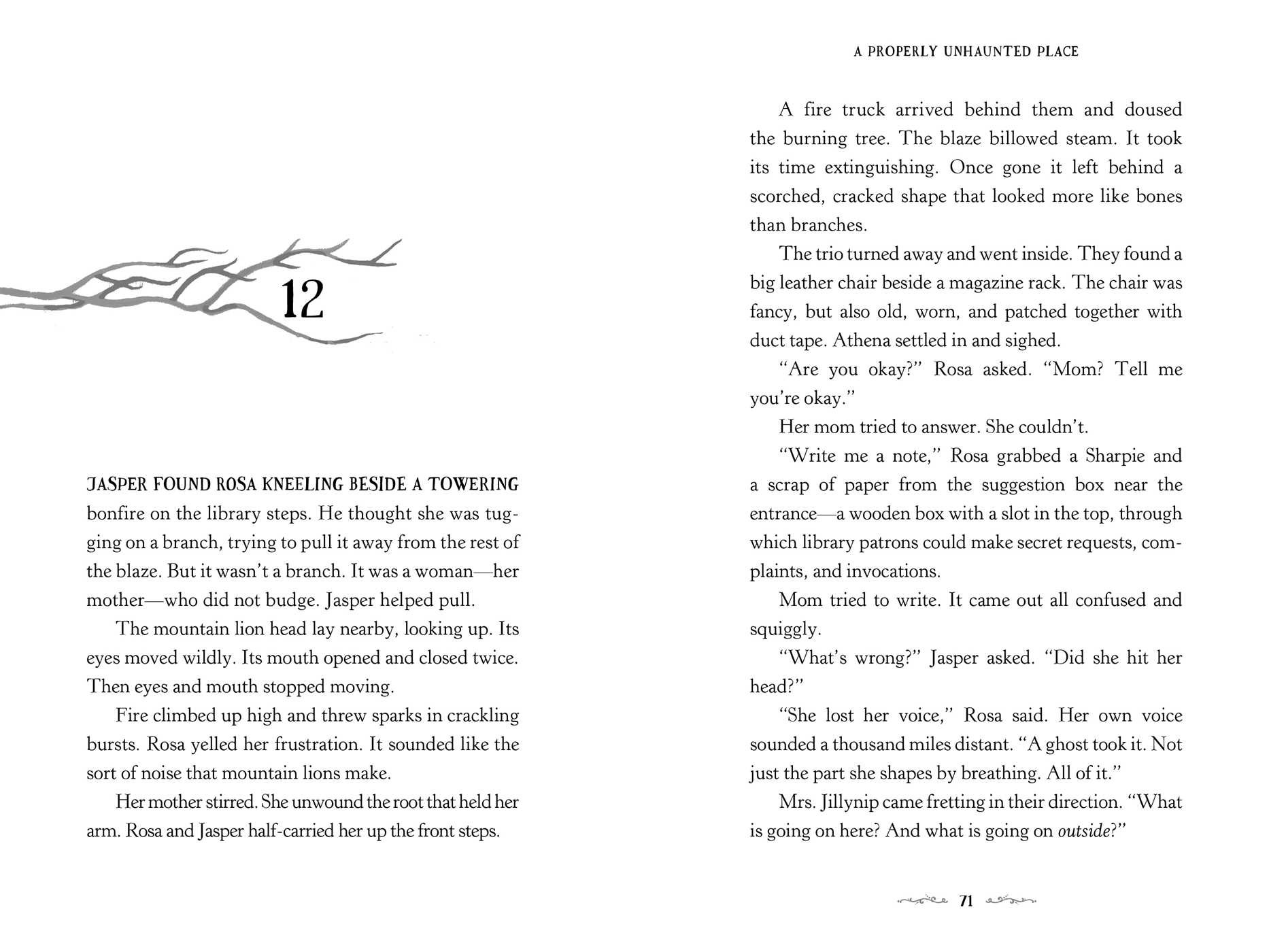 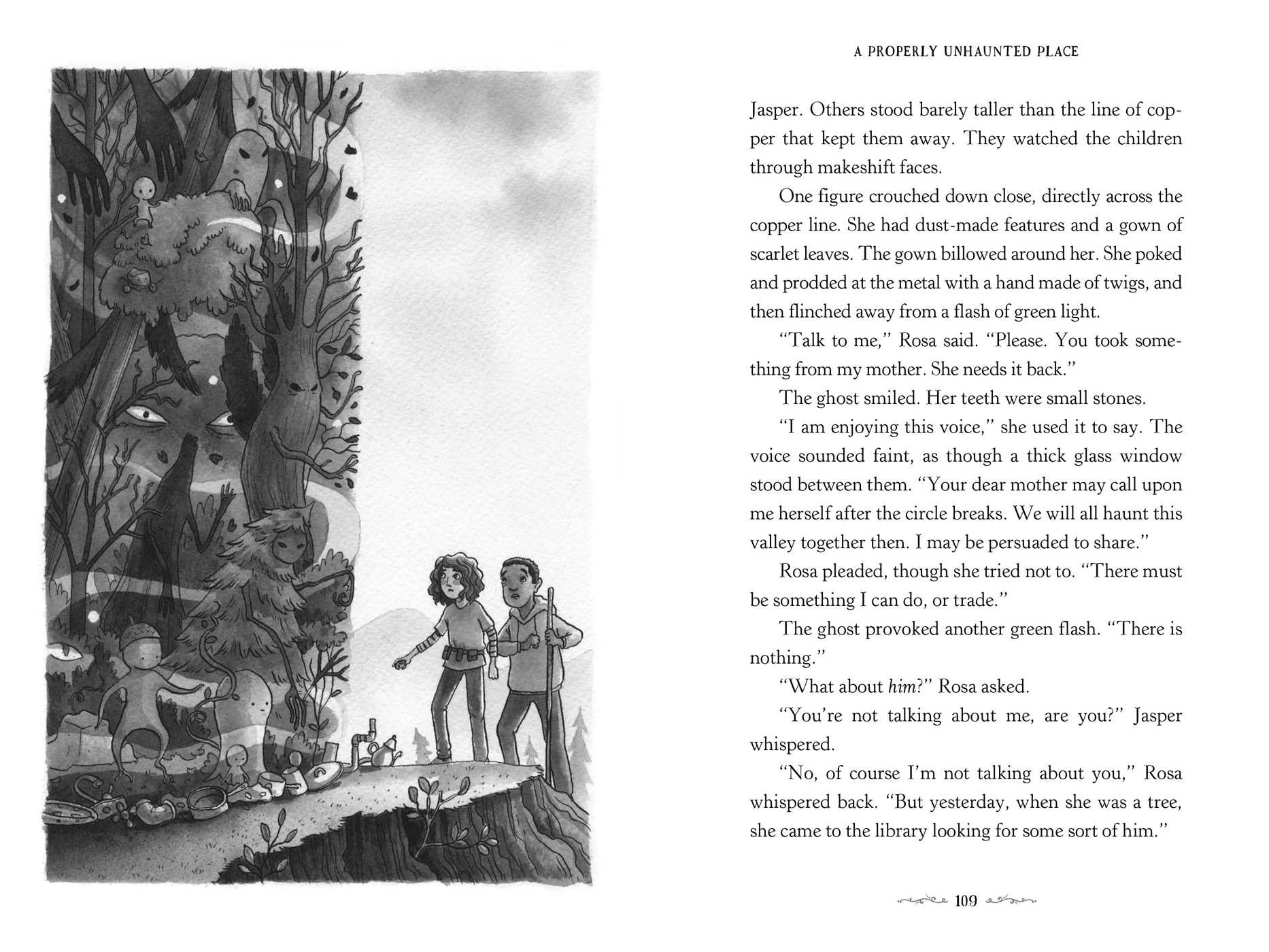 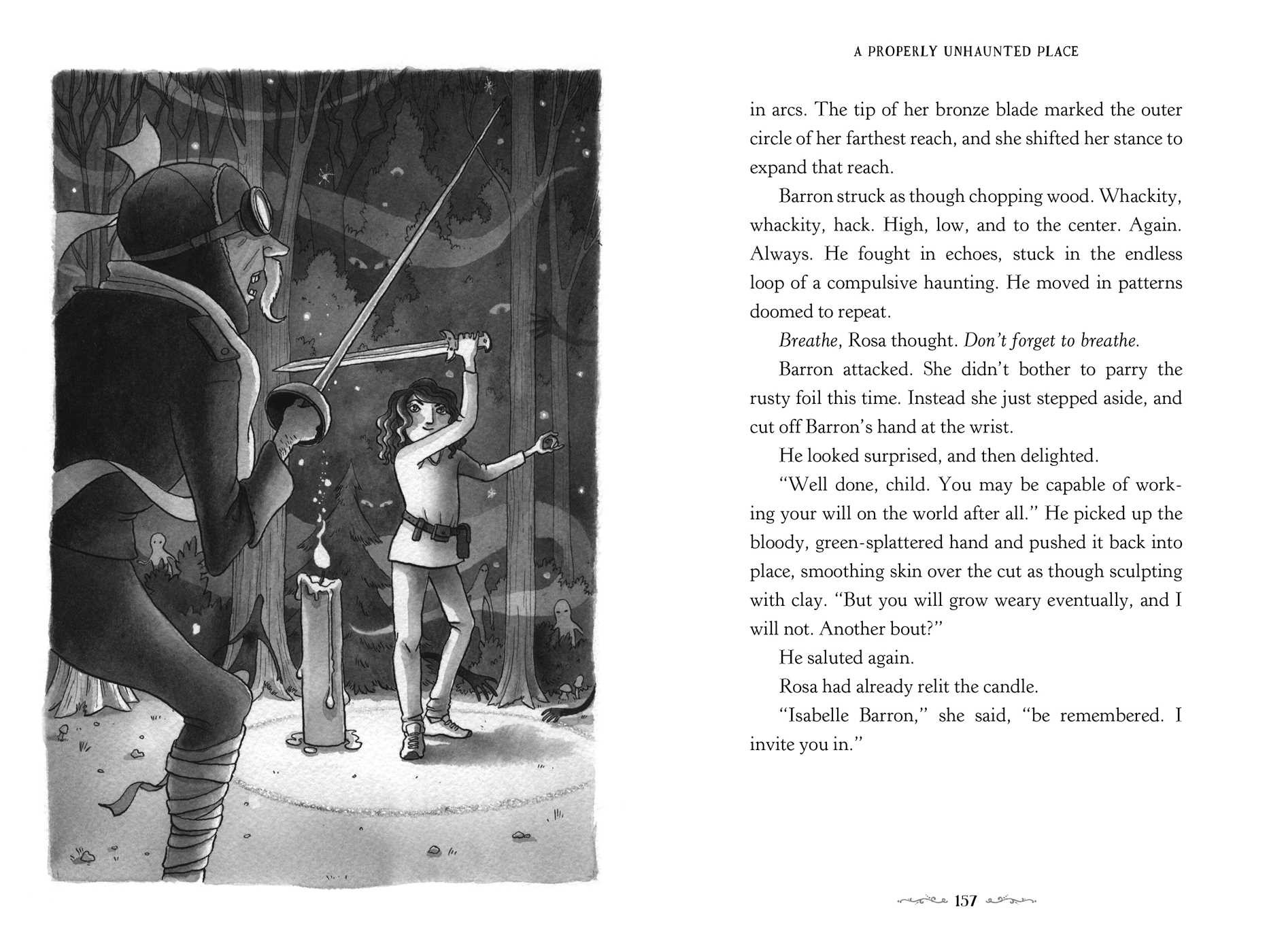 From National Book Award–winning author William Alexander comes a wryly humorous story about two kids who try to save their town by bringing back its ghosts.

Jasper Chevalier has always lived in Ingot. His father plays a knight at the local Renaissance Festival, and his mother plays the queen. Jasper has never seen a ghost, and can’t imagine his un-haunted town any other way. Then an apparition thunders into the festival grounds and turns the quiet town upside down.

Something otherworldly is about to be unleashed, and Rosa will need all her ghost appeasement tools—and a little help from Jasper—to rein in the angry spirits and restore peace to Ingot before it’s too late.

A Properly Unhaunted Place 1
ROSA AND HER MOTHER MOVED into a basement apartment underneath the Ingot Public Library.

Rosa said nothing. She said it loudly. Rosa was not impressed with the basement apartment, or the library above it, or the town of Ingot. She missed their old place in the city. She missed having windows. She missed looking through those windows to see a place that was not Ingot.

Her new bedroom was bigger than her old one, but without any outside view the room still seemed smaller. Someone had tried to fix this by installing a fake window frame and painting beautiful landscapes of forests and lakes on the plaster behind it.

This was not home. She could unpack her stuff and spread it around, but that would not make it home. This was just an underground room she happened to be haunting.

Rosa went back into the living room. She didn’t find much life in there, either. Mom lay flopped across the couch, which was in an awkward place. It blocked the way to the kitchen. Rosa wanted to shove it into its proper place, but it properly belonged in the city, in their old apartment, directly adjacent to the huge central library. Rosa couldn’t shove it that far. She couldn’t even shove it away from the kitchen because her mother had fallen asleep on it.

Mom looked defeated. She also looked content with her defeat, and that was worse.

Rosa climbed over her mother, who stayed asleep—or at least pretended to sleep—and left the apartment. She didn’t bring her tool belt. She didn’t even know where it was. That didn’t matter, though. Not here.

She went upstairs to explore the Ingot Public Library.

Nice old building. Rosa closed her eyes and smelled the familiar, musty, dusty smell of old books given time to think. Then she opened her eyes and let herself wander into odd corners and unusual nooks. That quickly brought her somewhere she wasn’t supposed to be.

“This is Special Collections, dear,” said a woman with wispy hair, white gloves, and aggressive eyebrows. “This is where we keep very old books, maps, and historical records. You need permission to be here. You need to sign the form on the clipboard. And children aren’t allowed at all, even if they do sign the form on the clipboard. Children’s books are through that door, down the hall, and in the far corner. Please don’t touch anything on your way there.” Her voice tasted like honey dribbled over raw rhubarb.

“Ah,” the other librarian said. She took the time to make eye contact now. “I see. Though I’m not at all sure why such an esteemed specialist has chosen to work here, in Ingot.”

Silence stretched thin between them.

“Ah,” the librarian finally said. “Well then. Hello. Welcome. I’m Mrs. Jillynip. Pleased to meet you. But please don’t come and go through this part of the collection. Not without gloves.”

Mrs. Jillynip went away without bothering to learn Rosa’s name. Then she watched Rosa sideways to make sure she didn’t touch any of the maps. That made Rosa want to touch maps. She wanted to jump up and down on a big pile of maps. But she didn’t. Instead she tried to leave by way of a spiral staircase in the corner of the room.

“Not there!” Mrs. Jillynip snapped. Then she took a breath and tried to be more civil. “Please don’t ever go up there.”

“Because nothing’s up there. And it isn’t safe. The whole staircase might come down. Then the Historical Society would be angry with you. Plus you’ll probably break both of your legs. Children’s books are that way.”

Rosa turned around and went that way. She passed through the children’s section. It had more dusty, creepy, glass-eyed stuffed animals than actual books, so she left to explore the rest of her new library. She noticed all the places where haints, ghosts, revenants, specters, the spirits of the living, and the spirits of the dead would collect themselves if this building stood anywhere other than Ingot. She spotted all the little things that would probably offend them, or enrage them, or send them howling in between the bookshelves in the very small hours of the night if this were any other library in any other town.

Ingot was not haunted. Ingot was the only unhaunted place that Rosa had ever heard of. The Ingot Public Library did not need an appeasement specialist. It had nothing to appease—nothing but Rosa.

She moved unappeased through the library stacks until she found the public bathroom. The sink fixtures inside were all copper, polished in some places and stained green in others. Each mirror had a small shelf underneath it, just like mirrors are always supposed to have, but the shelves stood empty. No coins. No pebbles. No candle stubs. A candle would have been especially helpful. Ghosts could use them to rest, or to pass between boundaries. Lit candles could also make nasty smells disappear, and would have been helpful in this particular bathroom.

Rosa washed her hands. Then she took a pebble from her pocket and set it on the mirror shelf. This was a decent way to say thanks to a mirror—and to anything likely to lurk inside a mirror. It was also a way to greet lost relatives.

“Hi Dad,” she said, even though he wasn’t there.

A blonde girl pushed the bathroom door open. She gave Rosa a funny look. Rosa ignored her intensely and left the bathroom. She needed to leave the building. She hurried through the front lobby and half-ran beneath a portrait of a man with a long, elaborate mustache—Bartholomew Theosophras Barron, founder of Ingot Town. Mr. Barron’s painted eyes looked into the distance in a self-important way. They didn’t follow Rosa as she rushed outside.

She went without her tool belt, without matches, chalk, or salt, without any proof of her family profession but another pebble in her pocket and a little copper medallion of Catalina de Erauso, Rosa’s patron librarian, around her neck. The medallion showed de Erauso holding a sword above the Latin inscription MEMENTO MORTUIS. “Remember the dead.” There was nothing special about the pebble.

It felt wrong to leave the building without her tool belt. Rosa left anyway. She sat on the library steps and decided she was angry. She liked that decision, even though she knew it wasn’t right. Sadness slowed her down. It made the air feel thick to move through and heavy to carry in her lungs. But anger was fuel she could use to move faster. She would rather be mad—at Mom for the move, and for taking a job that didn’t really need her, and for needing such a clean and brutal break away from their proper work. She would rather be mad at Ingot for its odd, unnatural emptiness of everyone except for the living. So she decided that she was.

The town stretched out in front of her. She could see most of it from here. Old houses clustered close together, some in good repair and others run-down and peeling. Mountains surrounded Ingot on all sides like the rim of a bowl or a bucket.

Bright green light flashed briefly in the foothills. Rosa stared at the spot where that green flash wasn’t anymore. Then a knight in full armor came striding down the sidewalk, and she stared at him instead. 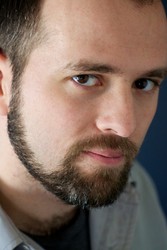 William Alexander won the National Book Award for his debut novel, Goblin Secrets, and won the Earphones Award for his narration of the audiobook. His other novels include A Festival of Ghosts, A Properly Unhaunted Place, Ghoulish Song, Nomad, and Ambassador. William studied theater and folklore at Oberlin College, English at the University of Vermont, and creative writing at the Clarion workshop. He teaches in the Vermont College of Fine Arts MFA program in Writing for Children and Young Adults. Like the protagonist of Nomad and Ambassador, William is the son of a Latino immigrant to the US. Visit him online at WillAlex.net and GoblinSecrets.com, and on Twitter via @WillieAlex.

Kelly Murphy is a New York Times bestselling author-illustrator and recipient of the E.B. White Award. She teaches illustration at her alma mater, the Rhode Island School of Design. Kelly currently lives in her native New England, surrounded by the flora and fauna featured in Together We Grow. Find out more at KelMurphy.com.

"Concise, poetic...Alexander has created a cautionary tale and a profound and beautiful work.”

* "Kelly Murphy's illustrations help bring life to William Alexander's (Goblin Secrets) succinct gem: a meticulously crafted world so tangible it feels like an alternate version of our own."

* "Alexander does an excellent job of building a contemporary world in which the paranormal is nevertheless ubiquitous and expected. This haunted world begs for further exploration. Though it's a perfectly enjoyable tale on a purely superficial level, readers who choose to dig deeper will find an engrossing exploration of complicated grief and what damage may be wrought when negative emotions are barricaded away rather than addressed. A fun and fast-paced supernatural mystery with secret depths for those who dare explore them."

"National Book Award winner Alexander (Goblin Secrets, 2012) displays strong writing chops. His latest is perfect for kids who like their creepy moments mixed with wildly imaginative elements (like a motorcycle-riding spirit who denies he’s dead). This should see plenty of circulation."

Rosa is feisty as well as totally competent, and her no- nonsense ways match the plot’s breakneck speed...The story behind the haunting is intriguing, and it’s skillfully revealed in bits and pieces, but it never overshadows Rosa’s much more interesting spirit hunting. Kids who prefer Ghostbusters to Goosebumps will find this right up their alley.

"National Book Award winner Alexander (Goblin Secrets) neatly inverts the typical ghost story, creating a supernatural landscape in which hauntings are part of the fabric of life and go hand in hand with respecting and honoring the departed. The friends’ realization that they must rely on themselves, not their parents, is relatable and poignant: Rosa’s efforts to accept her mother’s shortcomings and Jasper’s struggle to find his inner hero add depth to this charming mystery."