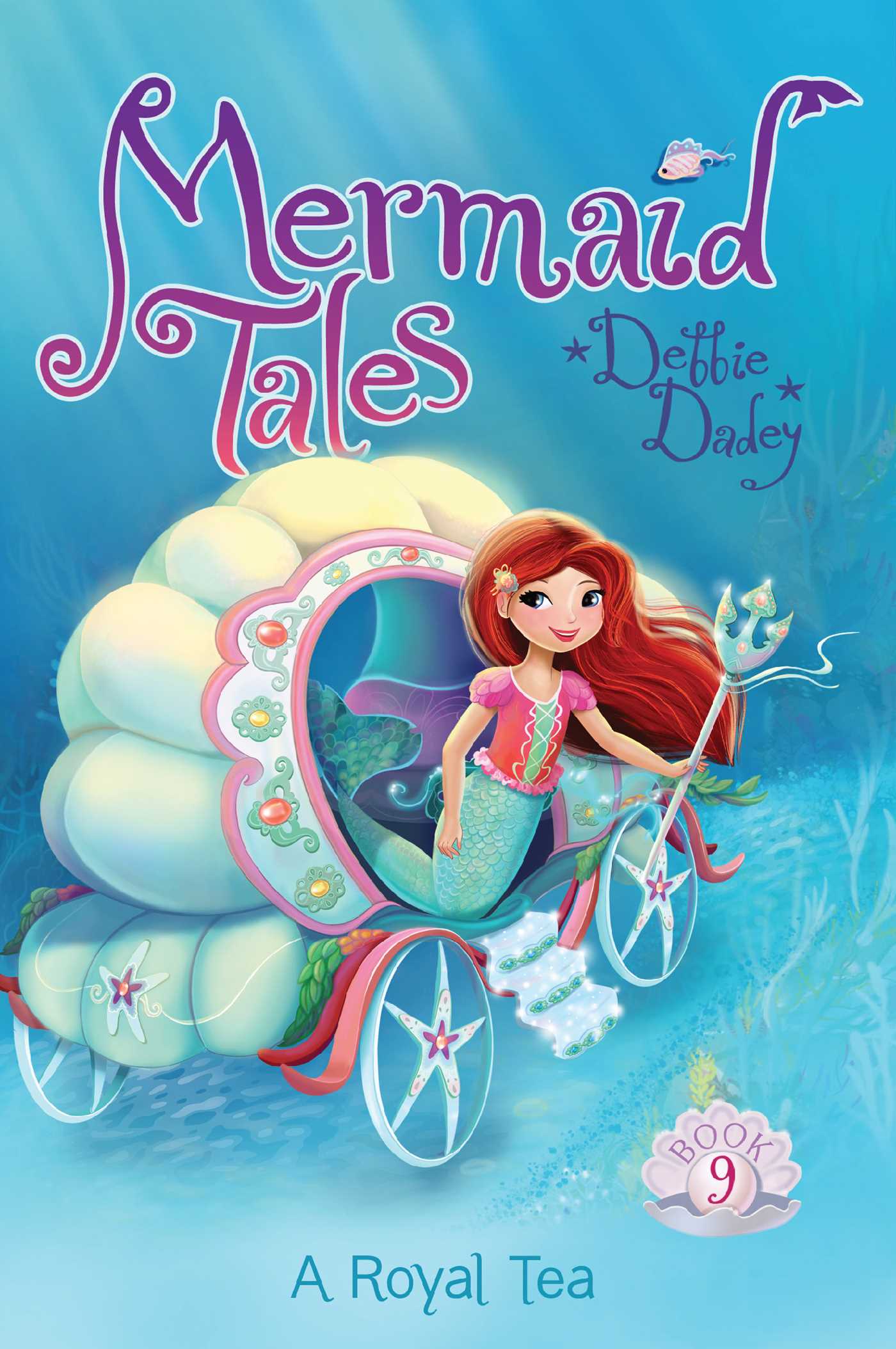 When Shelly meets the Queen of the Western Oceans in this Mermaid Tales adventure, she encounters a royal dilemma!

When a royal messenger announces that Queen Edwina is coming to tea, Shelly is as jittery as a jellyfish! After all, the Queen of the Western Oceans is her great aunt. And despite being a princess, Shelly has never met a queen before. How should she act? What should she wear?

Then Pearl tells Shelly that the queen is going to take Shelly to live in Neptune’s Castle: “It’s where a real princess would live,” Pearl tells her. Shelly is terrified of leaving her home, friends, and beloved grandfather behind. When the royal carriage arrives, she’s trembling from the top of her head to the tip of her tail. What will Queen Edwina think of Princess Shelly? And will she really take Shelly away from the home she loves?

Holiday?
SHELLY!” MRS. KARP SAID. “What are you doing here?”

Shelly Siren looked around her third-grade classroom in surprise. It was first thing in the morning at her school, Trident Academy, and the other merstudents were just settling into their desks.

“It’s Wednesday,” Shelly told her teacher. “It isn’t a holiday, is it?”

A merboy named Rocky Ridge swam out of his rock desk toward the classroom doorway. “Holiday? All right! I’m going home!”

Mrs. Karp slapped her white tail on her marble desk. “Not so fast, young merman. It’s not a holiday.”

Rocky groaned, but Shelly was relieved. She had been afraid she had come to school on the wrong day. Things had been a little mixed up at her shell lately.

“I heard your grandfather has penguin pox, Shelly, and I know it’s highly contagious,” Mrs. Karp said with a worried look on her face, “so I wasn’t sure if you’d be at school today.”

“Penguin pox? Eek!” Several kids in the classroom pushed their desks away from Shelly’s.

Pearl Swamp put a hand over her nose and squealed, “Mrs. Karp, get her out of here right now before we all die!”

“Maybe not,” Rocky said. “But you do get itchy black-and-white bumps all over your body.”

Shelly nodded, causing her red hair to swirl in the water around her. “My grandfather became ill after he visited a museum in far-off waters. He’s locked away with a nurse to take care of him so I don’t catch it. I haven’t even seen him in days.” Shelly’s parents had died when she was very young, so she lived with her grandfather.

“I’m glad you’re healthy, Shelly. And I hope your grandfather is well soon too,” Mrs. Karp said, turning her attention back to the class. “All right, then. Let’s all take our seats and get to work. Today we are starting a new unit on penguins!”

Kiki Coral, the smallest mergirl in the class, leaned over and patted Shelly’s hand. “I’m sorry about your grandfather. I hope he gets better soon.”

Shelly nodded and tried to listen to the science lesson, but she found it hard to concentrate on her favorite subject. Everyone in the merclass, except for Kiki and Echo, kept their desks scooted far away. They even tucked their tails in tightly beneath them so that they wouldn’t accidentally touch Shelly. Pearl held her nose whenever she looked at Shelly. No one wanted to catch the penguin pox!

Shelly felt awful. Why was everyone acting like she had a horrible disease? She was almost glad when Rocky yelled, “Mrs. Karp, look! I need to go home. I have the dreaded penguin pox!”

Everyone in the class gasped, but Shelly knew the spots on Rocky’s arms were fake. She’d watched him draw them on with a sea quill and octopus ink.

Mrs. Karp rushed over to Rocky, took one look at the pretend spots, and pointed to the hallway. “Mr. Ridge, please step outside for a little conference.”

“Ooh,” several merboys in the room howled as Rocky slowly followed Mrs. Karp out of the classroom.

“Look at what you’ve done,” Pearl snapped at Shelly. “You’ve gotten poor Rocky into trouble with your icky disease!”

Poor Rocky? Since when did Pearl care about anyone but herself? Shelly sighed. She had a feeling that this wasn’t the end of her penguin pox problems.