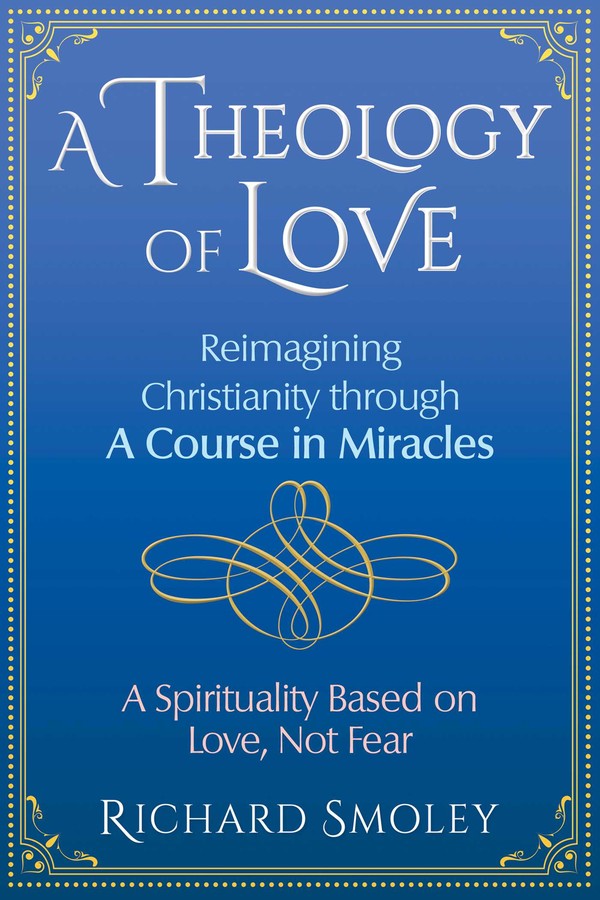 A Theology of Love

Reimagining Christianity through A Course in Miracles

A spirituality based on love, not fear

• Shares key, inspiring teachings from A Course in Miracles as well as Hinduism, Buddhism, Gnosticism, and the Sefer Yetzirah, the oldest known Kabbalistic text

• Cites philosophical wisdom from Kant, Blake, Jung, and Gurdjieff, alongside cognitive science, to reveal how the world is not difficult and flawed, but our fear-based mind-sets lead us to see it that way

In the West, theology has almost always meant Christian theology--a hodgepodge of beliefs that are hard to make sense of. Why, for example, should an all-loving, merciful God have gotten mad at the human race because someone ate a piece of fruit six thousand years ago? And why would he send part of himself down to earth to be tortured to death? These beliefs, stated baldly, are nonsensical. Millions of people are realizing this and losing their faith. The time has come to reenvision Christian theology without contradictory teachings laced with fear. It is time for a theology of love and miracles.

Richard Smoley reframes Christian theology using logical, consistent, and easy-to-understand teachings of unconditional love and forgiveness. He draws inspiration not only from the Bible, but also from Hinduism, Buddhism, Gnosticism, and from esoteric and mystical teachings, such as A Course in Miracles and the Sefer Yetzirah, the oldest known Kabbalistic text. He explains how the “fallen” state of the human condition, not one of sin but of oblivion, leads us to experience the world as flawed and problematic--not wholly evil, but not wholly good.

Citing philosophical wisdom from Kant, Blake, Jung, and Gurdjieff, alongside cognitive science, Smoley reveals how it is not the world that is flawed, but the way we see the world. Sharing key teachings from A Course in Miracles, he shows that our fear-based mind-sets--often filled with anxiety, suffering, and shame--lead us to feel separated from God when, in fact, we are all extensions of a God of infinite love and light.

Offering a path to help you regenerate from the “fallen” state and see the real spiritual world and loving God that lies behind it, the author provides ways for each of us to craft our own self-consistent theology. He also lays out a vision for the future of spirituality, a path for present-day religion to transform into something higher and more universal.

It is now clear that the current dominant worldview, that of materialistic science, does not have the range or depth to sustain the human need for meaning.

E.M. Forster said it in the epigraph to his novel Howards End: “Only connect.” It was the connection between the mind and the emotions--or, if you prefer, the heart--that he meant. A religion that cannot do this, or one that permits one side to hypertrophy while the other side withers, is, in my view, not a healthy religion at all. And it will bring forth fruit that is like itself.

In that case, why bother with Christianity in particular? Because Christianity is our background, our heritage. Yet it would be unwise, I think, to reject the spiritual insights that we have gotten from other traditions. They tell us too much for us to turn them away. Thus it would be useful if this new theology were able to make use of insights from all the world’s religions.

In this book, sources of inspiration will include the Bible; Hinduism and Buddhism; esoteric and mystical strands of thought, including the Kabbalah; individual visionaries such as William Blake and C.G. Jung; insights from Kant, William James, Heidegger, Gurdjieff, and Karl Jaspers; and even popular writers such as Philip K. Dick. I will also make use of the twentieth century text A Course in Miracles, possibly the greatest reformulation of Christianity in recent times.

The Course, as it is called, is a stone that the builders rejected. I have almost never seen it discussed in the intellectual press, nor have I ever seen it treated in mainstream theological circles. If anything, it has been consigned to the purgatory known as the study of new religious movements.

Despite this official indifference, the Course has sold over 3 million copies in twenty-six languages since its publication in 1975. It has won widespread admiration in the human-potential movement. Willis Harman, the late president of California’s Institute of Noetic Sciences, wrote, “The set of books comprising A Course in Miracles comprise perhaps the most important writing in the English language since the translation of the Bible.”

The theology of the Course, as we will see, differs radically that of mainstream Christianity. But it has the same core spirit. The Course’s theology begins with God the Father. God is infinite love and light: “God is the light in which I see,” says one lesson in the Workbook. As infinite love, the nature of God is to extend himself. In so doing, God has created the Son, who is a primordial unity, although the Sonship is also expressed in the plural form: “God has only one Son. If all His creations are His Sons, everyone must be an integral part of the whole Sonship. The Sonship in its Oneness transcends the sum of its parts” (T, 33; emphasis in the original). In short, the Son is each of us, individually and collectively.

Because only what God creates is real, our only reality as Sons of God is light and love and happiness. This cannot be reversed. Thus there is no danger, no pain, no sorrow. This is heaven. We have never left it. “Heaven is now. There is no other time. Heaven is here. There is no other place” (M, 61).

And yet the opposite seems to be the case. Heaven often seems remote, as do infinite light and love and power. What happened?

The Course also speaks of the Fall, although it usually calls it the separation. The separation never happened, because God did not will it, and, because his Son shares all his characteristics, the Son does not will it either. Nonetheless, “into eternity, where all is one, there crept a tiny, mad idea, at which the Son of God remembered not to laugh.”

This “tiny, mad idea” is the idea of separation--the idea that the Son could be isolated from God. In a sense this idea is suppositional only: it is as if the Son wondered, in a brief moment, “What if I could exist apart from God?” The Course calls this “the detour into fear.”

If you were to take a minute to imagine the worst things that could happen to you--death, degradation, pain, torture, the loss of loved ones--you could make them all seem quite real in your mind. (It is probably not a good idea to try this for very long.) While you were imagining it, it would feel as if it were real. You would, for a moment, suffer almost as if you were going through these terrible things.

Such a suppositional moment, as it were, is the interval that constitutes the world as we know it, throughout all of time and space. It is an imaginary reality; it could not have any actual substance, because God has not willed it. God loves his Son, and contrary to certain theologies, will never make his Son suffer. But his Son can imagine he is suffering. And because the Son has all the power of God himself, he can make this imaginary world seem powerfully real. He can even forget his own reality. “In his forgetting did the thought become a serious idea, and possible of both accomplishment and real effects.” This is the world we see. It was made by the ego. The ego is the “tiny, mad idea.”

Richard Smoley is one of the world’s leading authorities on the Western esoteric traditions, with degrees from both Harvard and Oxford. His many books include Inner Christianity: A Guide to the Esoteric Tradition and How God Became God: What Scholars Are Really Saying about God and the Bible. Former editor of Gnosis, he is now editor of Quest: Journal of the Theosophical Society in America. He lives in Winfield, Illinois.

"If there is anything that can help humanity towards an age of the Holy Spirit (the subject of a wonderful discussion in chapter 17), it is surely radical forgiveness. For the vision of such love, and help along the way of living it, we can be grateful to both A Course in Miracles and Richard Smoley."

“I literally cannot think of another scholar who could reasonably attempt what Richard Smoley not only attempts but succeeds in doing in A Theology of Love. Smoley constructs a new, mysterious, utterly practical, and broadly gnostic Christian-based approach to life; it is one of mysticism, questioning, critical belief, and personal change. Some contemporary scholars possess the intellect, some possess the inner experience--but none, other than Smoley, possess both, and in sufficient amounts, to achieve this unprecedented task. When you read A Theology of Love you will understand why Richard is our generation’s premier independent scholar of spirituality.”

“In our increasingly secular world, people hunger for a way of harmonizing their actual spiritual experiences and their inner knowing with religious traditions that no longer affirm them. In A Theology of Love, Richard Smoley shows how this is possible. This is a powerful contribution, powerful because it is also simple and uncomplicated. To those who grieve that Christianity has lost its way because of its sellout to tawdry, unprincipled politicians, Smoley’s message is CPR for the soul.”

“This book addresses some very important issues for the community that calls itself Christian. The author’s breadth of knowledge and his ability to talk the ecclesiastical talk should help his message reach many readers who know nothing about A Course in Miracles but would find that it speaks to them. And maybe it will help to dispel the glut of misinformation that’s out there, too.”

– (Robert Rosenthal, M.D., author of From Never-Mind to Ever-Mind and From Plagues to Miracles)

“Far and away the most exciting examination of the core Christian promise and its continuing relevance for us today that I have read in years.”

“No one gives a deeper and more balanced account of what he calls ‘inner Christianity’ than Richard Smoley. Historically erudite and theologically awake, he is that rare scholar who is a practitioner--well versed in the spiritual practices of all those currents of ‘true Christianity’ that recognize that to be a ‘Christian’ is to become a ‘Christ’ and embody his unconditional love of human beings (individually, as beings of infinite and absolute value) and humanity as such: the human project. Too much of contemporary Christian thought ignores this fundamental teaching--at its and our peril. A Theology of Love will perhaps deepen the understanding of those who seek a deeper, healthier Christian path.”

– (Christopher Bamford, author of Healing Madonnas and An Endless Trace)

"At the end of my first reading of the book, I did want to want to set it down, only partially tongue in cheek, with a satisfying hurrah of ‘Valentinus rides again’! Valentinus having been the most successful and purportedly eloquent of early Gnostic writers. Whether you are convinced or not, it is one of those books that wholly deserves to be seriously wrestled with to assure yourself as to why or why not? It, also, deserves to prompt more serious Christian theological reflection on the Course in Miracles itself (though on the likelihood of that, I expect I am as pessimistic as the author)!"

A Theology of Love

Reimagining Christianity through A Course in Miracles