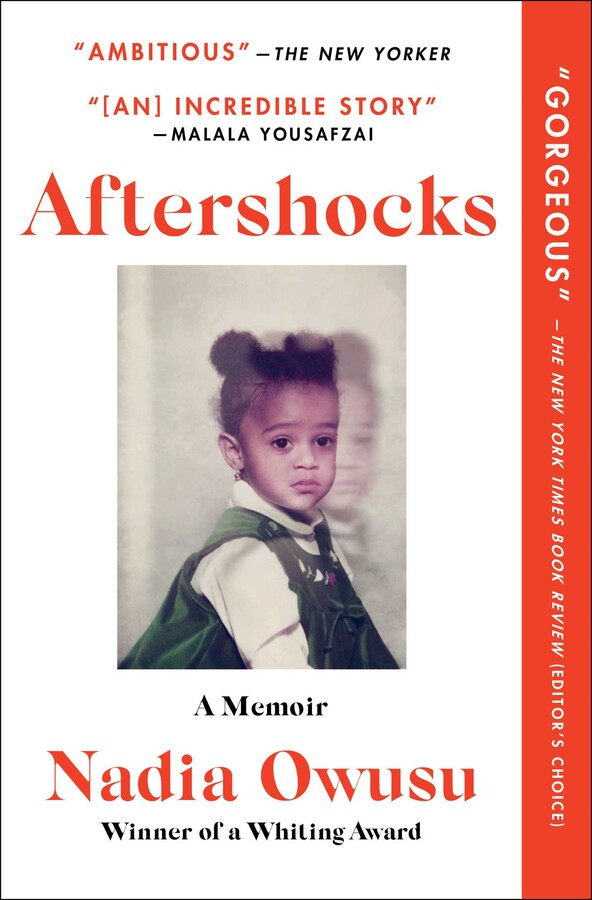 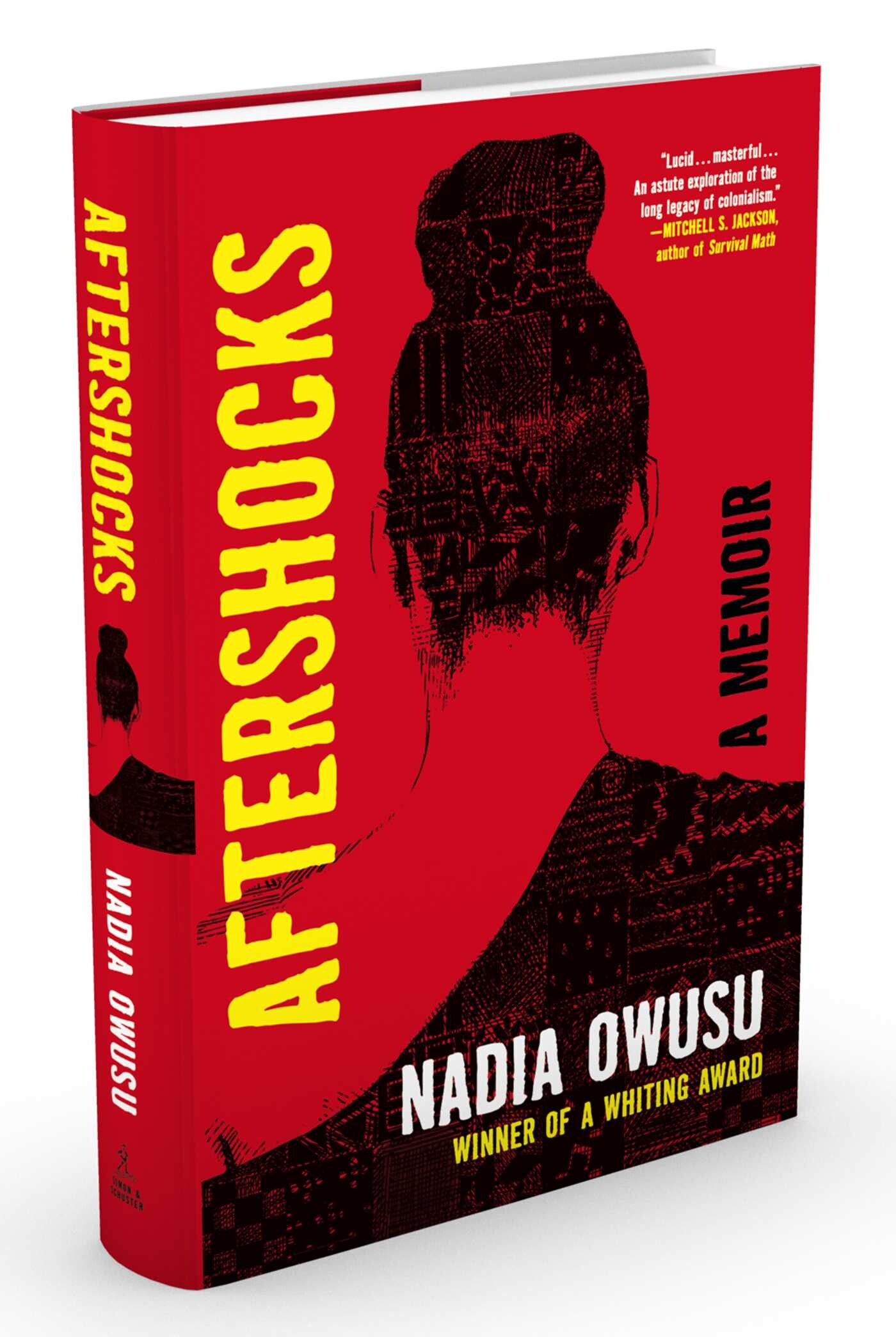 In the tradition of The Glass Castle, a deeply felt memoir from Whiting Award–winner Nadia Owusu about the push and pull of belonging, the seismic emotional toll of family secrets, and the heart it takes to pull through.

Young Nadia Owusu followed her father, a United Nations official, from Europe to Africa and back again. Just as she and her family settled into a new home, her father would tell them it was time to say their goodbyes. The instability wrought by Nadia’s nomadic childhood was deepened by family secrets and fractures, both lived and inherited. Her Armenian American mother, who abandoned Nadia when she was two, would periodically reappear, only to vanish again. Her father, a Ghanaian, the great hero of her life, died when she was thirteen. After his passing, Nadia’s stepmother weighed her down with a revelation that was either a bombshell secret or a lie, rife with shaming innuendo.

With these and other ruptures, Nadia arrived in New York as a young woman feeling stateless, motherless, and uncertain about her future, yet eager to find her own identity. What followed, however, were periods of depression in which she struggled to hold herself and her siblings together.

Aftershocks is the way she hauled herself from the wreckage of her life’s perpetual quaking, the means by which she has finally come to understand that the only ground firm enough to count on is the one written into existence by her own hand.

Heralding a dazzling new writer, Aftershocks joins the likes of Don’t Let’s Go to the Dogs Tonight and William Styron’s Darkness Visible, and does for race identity what Maggie Nelson does for gender identity in The Argonauts. 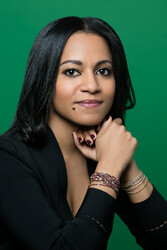 Nadia Owusu is a Brooklyn-based writer and urban planner. She is the recipient of a 2019 Whiting Award. Her lyric essay So Devilish a Fire won the Atlas Review chapbook contest. Her writing has appeared or is forthcoming in the New York Times, the Washington Post’s The Lily, Literary Review, Electric Literature, Epiphany, and Catapult. Aftershocks is her first book.

PRAISE FOR AFTERSHOCKS BY NADIA OWUSU

"In a literary landscape rich with diaspora memoirs, Owusu’s painful yet radiant story rises to the forefront. The daughter of an Armenian-American mother who abandoned her and a heroic Ghanaian father who died when she was thirteen, Nadia drifted across continents in a trek that she renders here with poetic, indelible prose."—O MAGAZINE

"[Owusu] dispatches all of this heartache with blistering honesty, but does so with prose light enough that it never feels too much to bear."—ENTERTAINMENT WEEKLY

"Owusu’s life has been a series of upheavals: She has lived across the world, thanks to her Ghanaian father’s work with the United Nations, and was all but abandoned by her Armenian-American mother. Eventually, settling in New York as an adult gives the author a chance to make sense of her identity. Images of earthquakes and their aftermaths recur throughout the narrative: As Owusu notes, aftershocks are the 'earth’s delayed reaction to stress.'"—THE NEW YORK TIMES

"Owusu devotes a portion of this memoir to surveying the ruptured histories of the many countries she's connected to, but it's her striking personal story and charged language that makes Aftershocks compelling. [L]yrical...[A] well-wrought, often powerful memoir."—MAUREEN CORRIGAN, FRESH AIR

"Nadia Owusu's first full-length book, Aftershocks, is about all of these parts of what is her single, complex life. In her capable writing, stories become nearly tangible objects she holds to the light, turns over and over, eager to discover a never before glimpsed sparkle or a surprising divot in their familiar shapes."—NPR

"Full of narrative risk and untrammeled lyricism, [Aftershocks] fulfills the grieving author’s directive to herself: to construct a story that reconstructs her world." —WASHINGTON POST

"Throughout the book, Owusu writes poignantly about belonging and assimilation...as she grapples with identity and her willingness to erase the most vibrant parts of herself in an attempt to belong. Owusu is unflinching in examining herself, which is commendable... In the end, Owusu ultimately answers what home is. Her definition is pure and restorative to read. 'I am made of the earth, flesh, ocean, blood and bone of all the places I tried to belong to and all the people I long for. I am pieces. I am whole. I am home.'”—THE NEW YORK TIMES

"In her searing debut memoir, Owusu analyzes her shaky sense of belonging and identity as she reflects on her fractured family unit and upbringing."—TIME

"Nadia Owusu’s debut memoir, Aftershocks, has those residual tremors that follow an earthquake as its central metaphor, and the author had plenty of life-shaking events around which to orient her narrative. There is something fairy tale–like about Owusu’s story, an orphan-like existence of struggle and survival, but there is no fairy godmother who rescues this heroine—just a growing sense of self-awareness to orient her in a troubling world."—VOGUE

"This is a magnificent, complex assessment of selfhood and why it matters.”—ELLE

"It takes a skillful hand to weave complex concepts so seamlessly into a narrative, and Owusu executes this masterfully. By relating the events of her upbringing, she is also telling the story of her father and the history of the countries that had become home to her. Whether it’s coming to understand her sexuality or examining herself through the lens of race, Owusu takes the reader deeply through her thoughts and experiences."—LOS ANGELES REVIEW OF BOOKS

"Aftershocks offers an incredible account of a life both privileged and fraught, and a rigorous accounting of living as heir and stranger to so many histories, voices and identities."—SAN FRANCISCO CHRONICLE

"Powerful and devastating — and a reminder that usually the only hero any of us have is ourselves — Nadia Owusu's memoir Aftershocks is a fascinating exploration of the difficulties inherent to growing up and going between different cultures, never knowing if you belong everywhere or nowhere."—REFINERY29

"Aftershocks is a stunning, visceral book about the ways that our stories—of loss, of love, of borders—leave permanent marks on our bodies and minds."—BOOKLIST

"Aftershocks is deeply intimate, heartbreakingly honest, and a book that will likely reverberate throughout our hearts and minds long after we’ve finished reading."—LITHUB

"Aftershocks is an intimate work told in an imaginative style, with the events that shaped its author rippling throughout her nonlinear story. The structure mimics the all-consuming effect that a moment--a personal earthquake--can have on a life."—BOOKPAGE

"Aftershocks is the intimate, deeply moving memoir about where [Owusu] came from and how she found herself."—HELLOGIGGLES

"This extraordinary memoir is a seismic tale of unravelling her sense of self from a tangle of different languages and homelands. Owusu is a writer to watch."—BOOKSELLER (UK), EDITOR'S CHOICE

"Whiting Award-winner Owusu recounts her past through the metaphor of earthquakes, with a memoir that broods on lost identity and statelessness."—ELLE (UK)

"'I have lived in disaster, and disaster has lived in me,' writes one of the literary world's most promising new voices, Nadia Owusu, in this astonishing memoir. After her mother left and her father died, Owusu became a woman of many homelands and identities: she grew up in many countries including Tanzania, Ethiopia, Ghana, Uganda, Italy, and the UK. [Aftershocks] is Owusu's account of hauling herself out of the wreckage; an intimate look behind the division of today's world."—RED (UK)

“Nadia Owusu's Aftershocks bleeds honesty. It is a majestically rendered telling of all the history, hurt and love a body can contain. A wonderful work of art made of so many stories and histories it is bursting with both harshness and perseverance. An incredible debut.”—NANA KWAME ADJEI-BRENYAH, author of New York Times bestseller Friday Black

"Aftershocks is a triptych feat of style: the lucid language, the masterful handling of time, the brilliance of its seismic theme. It’s also an astute exploration of the long legacy of colonialism. Owusu is a product of that political and cultural collision, and one of the great gifts of this compelling memoir is the moving narrative of her reconciling that identity. And if that weren’t enough, Aftershocks is an indelible portrait of Owusu’s resilience in the face of almost unfathomable familial trauma as well as her immortal love for her father."—MITCHELL S. JACKSON, author of Survival Math

“Nadia Owusu has lived multiple lives and each has demanded much of her. She has met and surpassed those demands with her memoir, Aftershocks. Owusu is half-Armenian, half-Ghanaian; socially privileged and psychologically wounded. She spends her life moving between Europe, Africa and New York, reeling from her mother’s desertion and her father’s death. Her task and burden are threefold: to chronicle the historical wounds and legacies of each country; to chart her own descent into grief, mania and madness; to begin the work of emotional reconstruction. She does so with unerring honesty and in prose that is both rigorous and luminous.”—MARGO JEFFERSON, author of Negroland: A Memoir, winner of the National Book Critics Circle Award

“Aftershocks is more than just a book—it is delicate, intricate choreography. This memoir is a testimony to how certain books and writers can tell you their story in a way that mirrors your own. Even if the facts of that story are different, the emotion is familiar. Owusu is that writer. She has created a book full of shared emotional memories and I wanted to sit in those memories with her for as long as I could. Nadia Owusu is powerful, beautiful, poetic, and Aftershocks is a testimony to her commitment to constructing towering, lovingly-rendered sentences. Quite simply, Aftershocks is one of the most beautiful books I have ever read.”—BASSEY IKPI, New York Times bestselling author of I'm Lying but I'm telling the Truth

"A white-hot interrogation of the stories we carry in our bodies and the power they have to tear us apart. Owusu illuminates the blood and bones wrought by our borders and teaches us the necessity of owning our narratives when personal and collective histories have been shattered by violence.”—JESSICA ANDREWS, author of Saltwater