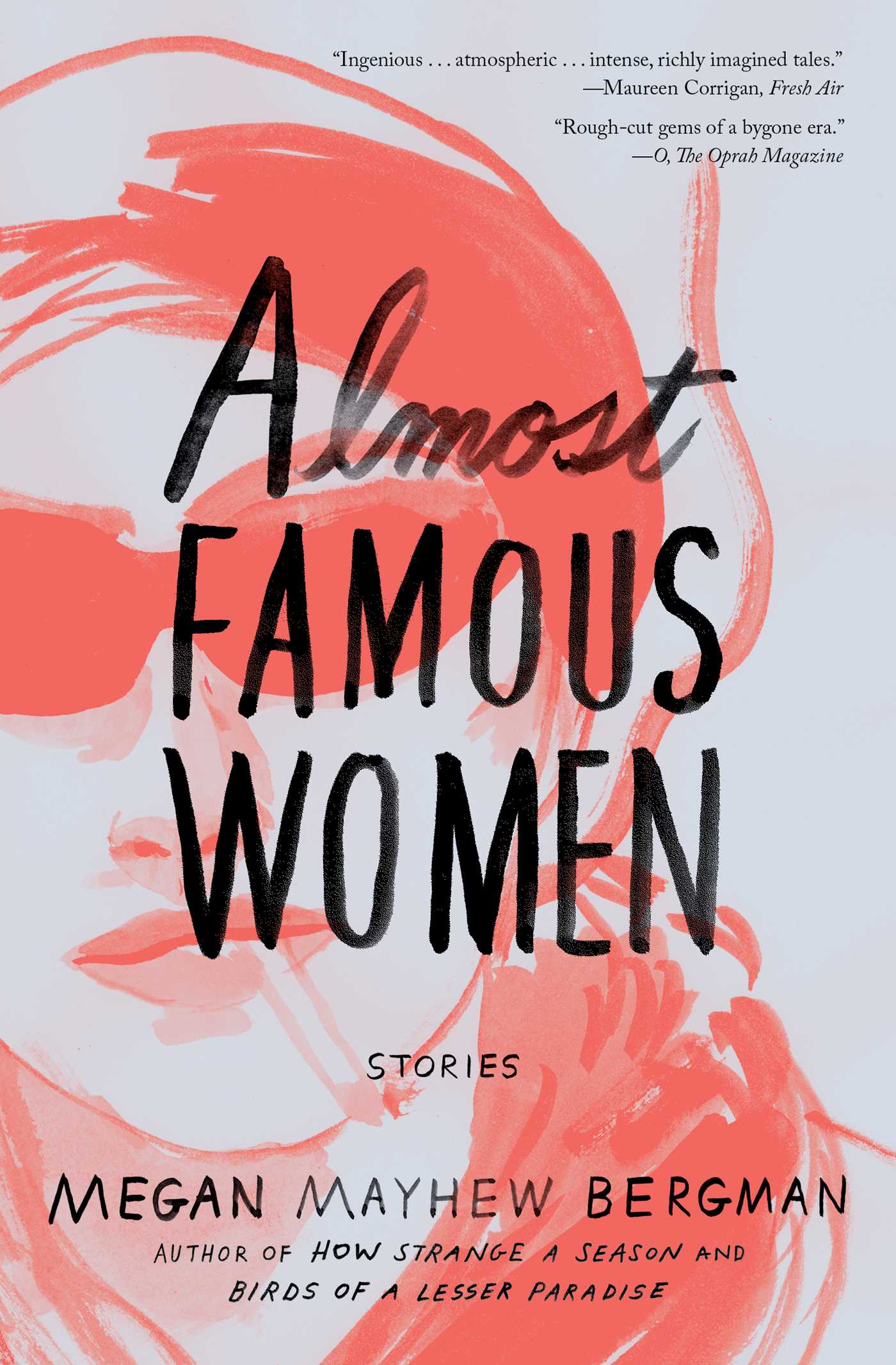 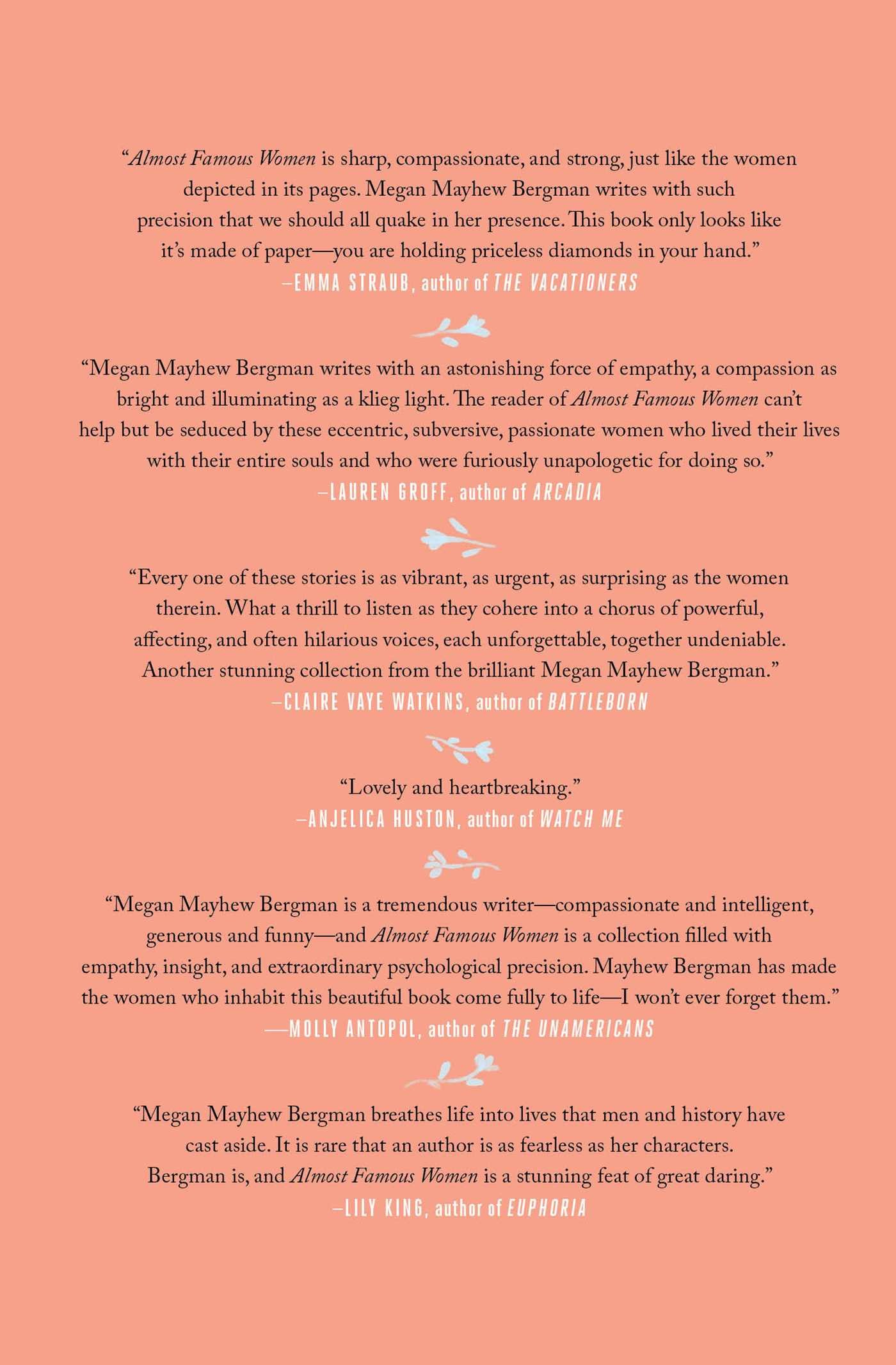 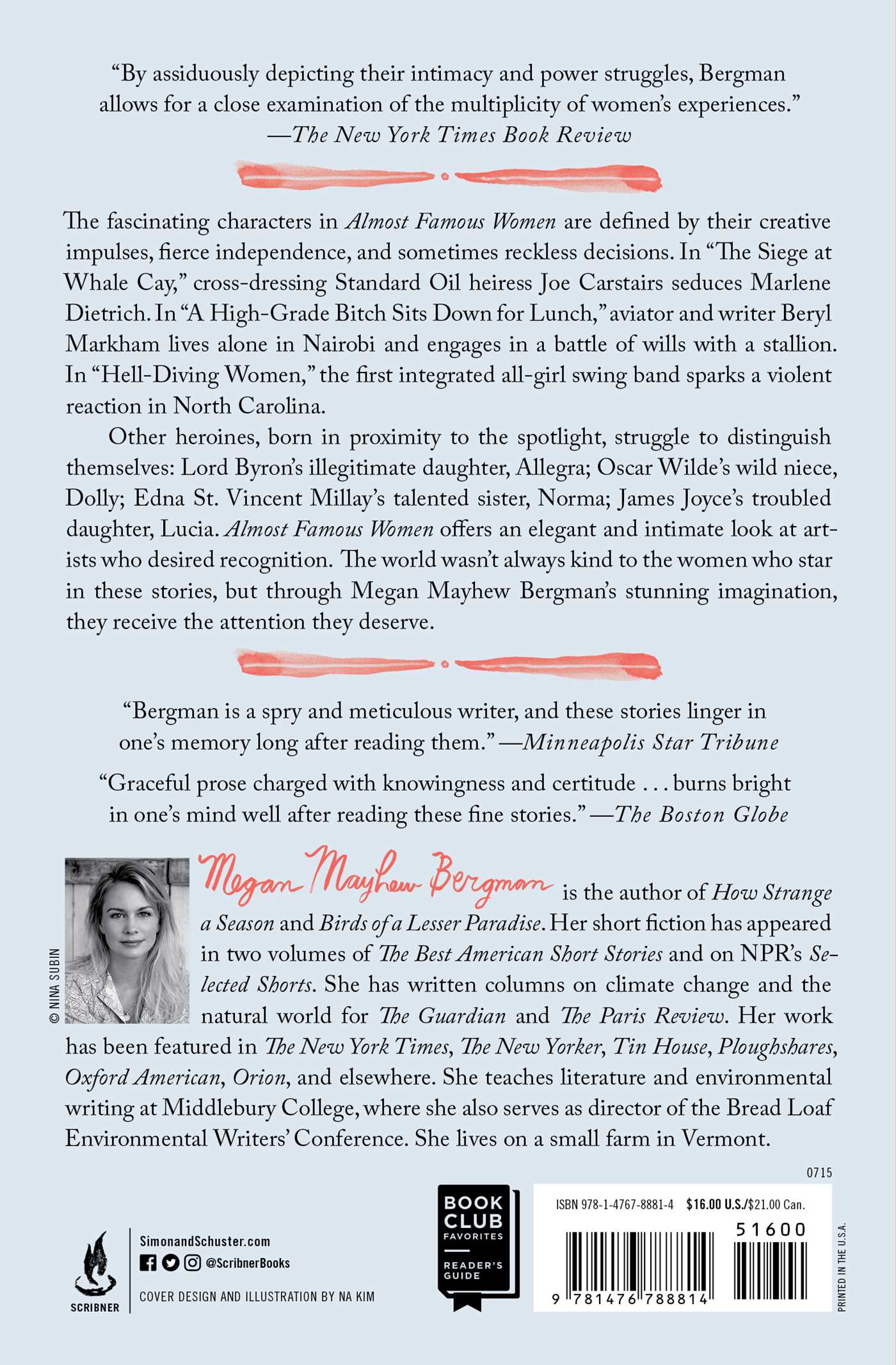 From a prizewinning, beloved young author, a provocative collection that explores the lives of colorful, intrepid women in history. “These stories linger in one’s memory long after reading them” (Star Tribune, Minneapolis).

The fascinating characters in Megan Mayhew Bergman’s “collection of stories as beautiful and strange as the women who inspired them” (Kirkus Reviews, starred review) are defined by their creative impulses, fierce independence, and sometimes reckless decisions. In “The Siege at Whale Cay,” cross-dressing Standard Oil heiress Joe Carstairs seduces Marlene Dietrich. In “A High-Grade Bitch Sits Down for Lunch,” aviator and writer Beryl Markham lives alone in Nairobi and engages in a battle of wills with a stallion. In “Hell-Diving Women,” the first integrated, all-girl swing band sparks a violent reaction in North Carolina.

The world wasn’t always kind to the women who star in these stories, but through Mayhew Bergman’s stunning imagination, they receive the attention they deserve. Almost Famous Women is “addictive and tantalizing, each story whetting our appetite for more” (Atlanta Journal-Constitution).

This reading group guide for Almost Famous Women includes an introduction, discussion questions, and ideas for enhancing your book club. The suggested questions are intended to help your reading group find new and interesting angles and topics for your discussion. We hope that these ideas will enrich your conversation and increase your enjoyment of the book.

In this collection of brilliantly written and cleverly imagined stories, Megan Mayhew Bergman brings to life women who have become footnotes in history. Fiercely independent, frequently eccentric, they are women who chose unconventional paths and achieved fame, however briefly. The stories in Almost Famous Women explore the choices these women made and the costs of their bravery and recklessness.

1. In “The Pretty, Grown-Together Children,” how is Daisy’s insistence that she narrate the story and Violet’s acquiescence representative of the sisters’ relationship?

2. Discuss Georgie’s perception of her relationship with Joe Carstairs in “The Siege at Whale Cay.” In what ways does Marlene’s visit cast doubts? Given Georgie’s understanding that “life with Joe never lasts” (p. 33), why does she remain on Whale Cay? What do you imagine Georgie’s future holds?

3. Why is Norma, of “Norma Millay’s Film Noir Period,” so willing to fill a sisterly role in which “it is understood that she should sense where she is needed and assist” (p. 69) Vincent? Is her loyalty to Vincent reciprocated? When have you set aside your own desires out of obligation or loyalty?

4. In “Hazel Eaton and the Wall of Death,” Hazel determines to fight her way back to “that vital feeling” (p. 108) that racing gives her. What is “that vital feeling” and what pushes her to seek it out? What characters in this collection display a similar thirst for adventure?

5. When Mario attempts to draw and asks Romaine to teach him, in “Romaine Remains,” what does he hope to gain? What happens to the control he seizes from her? Why does he sell only one of her drawings?

6. The nun who narrates “The Autobiography of Allegra Byron” had achieved a “blankness” (p. 115) at the convent until Allegra arrives. Why does she break protocol to care for Allegra? Is her encouragement of the girl’s hopes a kindness or a disservice?

7. What motivates the narrator of “Who Killed Dolly Wilde”? What is it about Dolly’s personality and experiences—or the narrator’s—that prevent Dolly from returning the narrator’s affections in full? Did you interpret the narrator’s actions at the end of the story as “the merciful thing to do” (p. 185)?

8. Lipstick brings the women in “The Internees” to life. What is one personal item that makes you feel most yourself?

9. Toward the end of “The Lottery, Redux,” Clare thinks, with dread, “what if the system fails?” What would the failure of the islanders’ system look like? Why do they preserve the tradition?

10. To what lengths do the women in “Hell-Diving Women” go in order to play their music? If the band were composed of men, would the audience’s reception have been the same? What drives Tiny to provoke the audience?

11. What is the cost of being exceptional, as the women in this collection are? How does it isolate them? What effect does fame or notoriety have on the people in their orbit?

12. Several of the stories are told from the vantage point of a companion who is close to the “almost famous” character. Why do you think the author chose to use this point of view? What characteristics do the companions have in common?

13. Discuss this passage from “Who Killed Dolly Wilde?”: “Maybe the world had been bad to its great and unusual women. Maybe there wasn’t a worthy place for the female hero to live out her golden years, to be celebrated as the men had been celebrated” (182). To what extent is society responsible for the fate of the characters?

1. Did you read Shirley Jackson’s “The Lottery” in school? Read (or re-read) the story and compare it to Bergman’s interpretation. What did she preserve and what did she alter? Do the stories leave you with the same feeling?

2. Ask each member of your group to choose one “almost famous” woman from the book to research. How does what you learn about the real-life women compare to the characters? We asked author Megan Mayhew Bergman to explain some of the historical links she discovered while researching these characters:

Dolly Wilde often compared herself to Allegra Byron, having a famous last name and being hidden away in a convent during her childhood.

Dolly and Joe Carstairs were lovers when they drove ambulances in World War II.

Edna St. Vincent Millay once read at Natalie Barney's salon; it is possible Romaine Brooks was in attendance.

3. If you had to write a story about another “almost famous” woman, who would you choose? Are there other women in history about whom you wish you knew more? Who, and why? 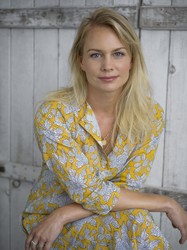 Megan Mayhew Bergman is the author of Almost Famous Women, Birds of a Lesser Paradise, and Nightingale Lane. She is a regular columnist for The Guardian, and her work has appeared in The New York Times, The Best American Short Stories, The Paris Review, The New Yorker, McSweeney’s, and Oxford American, among other publications. She was a fellow at the American Library in Paris and now directs Middlebury’s Bread Loaf Environmental Writers’ Conference. She lives in Vermont.

"Every one of these stories is as vibrant, as urgent, as surprising as the women therein. What a thrill to listen as they cohere into a chorus of powerful, affecting and often hilarious voices, each unforgettable, together undeniable. Another stunning collection from the brilliant Megan Mayhew Bergman."

“Almost Famous Women is sharp, compassionate, and strong, just like the women depicted in its pages. Megan Mayhew Bergman writes with such precision that we should all quake in her presence. This book only looks like it's made of paper-- you are holding priceless diamonds in your hand.”

–Emma Straub, author of The Vacationers

“Megan Mayhew Bergman writes with an astonishing force of empathy, a compassion as bright and illuminating as a klieg light. The reader of Almost Famous Women can't help but be seduced by these eccentric, subversive, passionate women who lived their lives with their entire souls and who were furiously unapologetic for doing so.”

– Anjelica Huston, author of Watch Me

“Megan Mayhew Bergman breathes life into lives that men and history have cast aside. It is rare that an author is as fearless as her characters. Bergman is, and Almost Famous Women is a stunning feat of great daring.”

"Megan Mayhew Bergman is a tremendous writer -- compassionate and intelligent, generous and funny -- and Almost Famous Women is a collection filled with empathy, insight and extraordinary psychological precision. Mayhew Bergman has made the women who inhabit this beautiful book come fully to life -- I won't ever forget them."

– Molly Antopol, author of The UnAmericans

"A collection of stories as beautiful and strange as the women who inspired them."

"Rough-cut gems of a bygone era."

"Bergman is a spry and meticulous writer, and these stories linger in one’s memory long after reading them."

"Stories that are so intriguing you wish they were full-length novels... Bergman revives these often troubled spirits with great compassion."

"Real women are found at the heart of these tales, women unusual for their times and almost entirely forgotten in ours... Arresting... Sympathetic, never romanticizing often self-destructive behavior, but exploring why these women sought risk taking and the effect of their impulses."

"Seek within to find the forgotten. Bergman's well-written short stories tell the tales of women who almost made it into history books."

"Thrill-seeking women abound in the collection, chock-full of bravery, defiance and creativity."

"There's an allure to reading about the historical lives of women who bucked social conventions, even when they come, as they so often do, to a tragic end. We read them with an element of wish-fulfillment, searching for assurances that there were other ways to think and be."

"Bergman’s scenarios are addictive and tantalizing, each one whetting our appetite for more... stunning depictions of how fame’s fire warms with even the slightest contact."

"By assiduously depicting their intimacy and power struggles, Bergman allows for a close examination of the multiciplicty of women's experiences."

"By exploring the women who didn't quite make it into history books, Bergman offers thoughtful commentary on the stories we do and don't preserve."

"A cleverly constructed, honest, and thoughtful book of stories. Fans of historical fiction and biography will find much to delight and ponder in these pages."

"[Bergman] nimbly animates the stories when she approaches them from tangential angles, often from the perspective of another character with something at stake."

"Bergman’s 13 gutsy short stories portray women whose lives left them on the fringes of history’s conversations... Through Bergman’s exquisite writing, we dwell briefly in multiple lives that history was unkindly content to lose—but Bergman wasn’t."