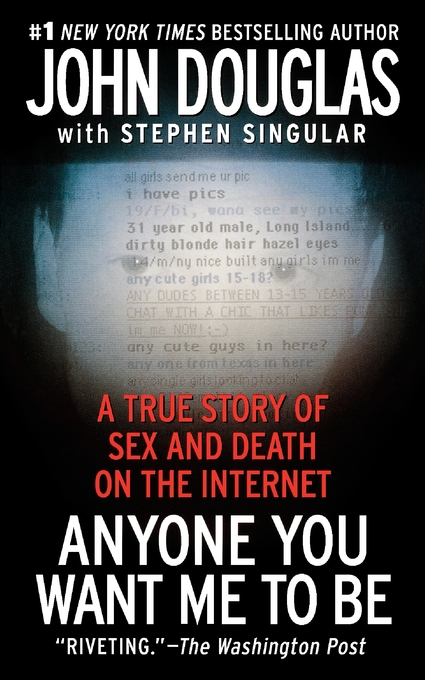 Anyone You Want Me to Be

A True Story of Sex and Death on the Internet

Legendary FBI profiler and #1 New York Times bestselling author John Douglas explores the shocking case of John Robinson, a harmless, unassuming family man whose criminal history began with embezzlement and fraud -- and ended with his arrest for the savage murders of six women and his suspected involvement in at least five disappearances. Most disturbing was the hunting ground in which Robinson seduced his prey: the world of cyberspace. Haunting chat rooms, targeting vulnerable women, and exploiting the anonymity of the Internet, his bloody spree was finally halted by a relentless parole officer who spent ten years trying to nail Robinson as a cold-blooded killer.

A cautionary tale set in a virtual world where relationships are established without the benefit of physical contact, and where mainstream Americans can be drawn down a dark path of temptation and death, Anyone You Want Me To Be is a contemporary real-life drama of high-tech crime and punishment.

By the mid-1980s, I'd been employed by the FBI for more than a decade and had helped create the Behavioral Science Unit at Quantico, Virginia. Using FBI profiling techniques, our unit had been pursuing serial killers from coast to coast and assisting law enforcement in identifying some of the most dangerous criminals in the United States. As we'd gained success and built a national reputation, police departments across the country had sought our help in solving difficult cases. I was consumed with this job and had few colleagues to delegate responsibilities to. More and more people wanted the FBI's help, and how could I turn down requests from those hunting serial killers? How could I not help families that had been victimized by the worst of crimes? When could I learn to say no? The answer to the last question came in 1983, when I went into a coma and barely escaped death. This brush with mortality caused me to lower my workload and to consider retirement. In 1995, I walked away from the job I loved.

I left the Bureau but didn't lose any of my desire to educate the public about protecting themselves from extremely dangerous people. I wrote about my FBI career in Mindhunter, which gave laypeople access to information and techniques used by the federal government to locate and catch serial murderers. I spoke on college campuses about how to keep yourself from becoming a victim. After hearing my presentation, listeners often came up to me and shared their own experiences with violent crime. When shaking their hands or looking into their eyes, I could tell that they'd been raped or robbed or deeply hurt by others. They were "silent victims," too ashamed or embarrassed to step forward and talk to law enforcement about what had been done to them. They were afraid of being victimized again -- this time by the judicial system. I believe that criminals should be punished to the fullest extent of the law, but I could not fault these people for not wanting to testify because of the fear they lived with every day. Nothing was more satisfying to me than telling people how to protect themselves from predators.

I believed that law enforcement was making progress in the war on crime -- until something happened that no one could have predicted. In the midnineties, the Internet arrived, and along with its great contribution to our society in so many areas, it began generating an entirely new criminal realm. The Wild, Wild West had returned, but this time it didn't look like cowboys and Indians or lawmen and gunslingers shooting at each other on the American frontier. Things had become much more complicated. The new outlaws were sitting at keyboards typing -- and defrauding, robbing, manipulating, and seducing people all over the world, and in some cases, ending their lives. After watching the dramatic spread of on-line crime, I realized that the same techniques and insights we'd discovered at the FBI could now be applied in cyberspace.

Criminals had found a new hunting ground, and instead of preying on a handful of people as they might have done in the past, these on-line predators could contact and manipulate tens or hundreds or even thousands of victims at a time. Instead of cruising the streets for potential victims, they were cruising the information highway. The possibilities were infinite and law enforcement was having trouble even figuring out how to use this new technology, let alone how to find and stop the perpetrators. There often weren't enough qualified people tracking on-line criminals, and cyber-investigations were highly complicated. If police departments had had more resources in place a few years ago, the story you are about to read might not have unfolded in the same way with the same number of victims.

In 2000, my coauthor, Stephen Singular, told me that he'd been following the John Robinson case in suburban Kansas City. I began reading about the case and talking to some of those involved in the Robinson investigation. The more I read, the more intrigued I became. This was the first known example of a serial killer using the Internet to find his victims, seduce them with his charm and the promise of a better life, lure them to his turf, and kill them. It was a deeply compelling example of how the Net could be abused by the most dangerous people in our society. It showed how someone with an extensive criminal background could transfer his predatory skills into the high-tech world -- and just how vulnerable people can be in cyberspace. All of my previous work about serial killers seemed to have led me in the direction of this story. I suddenly had a new mission: to tell the public that the same dangers it had needed to be aware of in the regular world, it now had to be aware of in the on-line realm. You absolutely could not take for granted that people were who they said they were in cyberspace. Once you logged on to the Internet and began exchanging e-mails, you needed to be smarter and more vigilant than ever.

The John Robinson story, which is an amazing tale in itself, needed to be shared with those looking for romance and sex on-line. It was the best window I'd yet found into the new emotional and criminal reality that high technology had created. New machines had created new crimes -- and new law enforcement tools. Robinson made history on the Net, and so did those who caught him.

The purpose of this book is educational -- and it's intended to be a warning. The on-line world has changed the nature of the awareness required to prevent yourself from being victimized. In the off-line world, you can pick up on the physical signals coming from people who could do you harm. You can use your intuition, your survival instincts, your senses, and your common sense to know when trouble is near. In cyberspace, you're cut off from your senses and some of your instincts. You're often dealing with a fantasyland that is unlike anything that preceded it. You don't see the whole person at the other end of your e-mail but interact with a stranger who is only showing a small and highly selective portion of himself or herself. When you operate in such a place, you need to be keenly attuned to who you are and what you're doing, as well as what possible predators are doing. Had the women in these pages been more discerning about such things, they might be alive today.

More than anything else, the arrival of the Internet inside private residences triggered the need for a new level of thought regarding this magnificent technological tool. The essence of that thought was simple: "Be conscious of what your computer is capable of and whom it can connect you to. It has effectively invited the entire world into your home, but is everyone welcome?"

In other words, you needed to become your own profiler of human behavior. You needed not only to understand the drives of the people the Net had hooked you up to -- their desires and their real motivations -- but just as importantly, you needed to understand yourself. What were your own weaknesses and vulnerabilities? What were your most secret longings? Where and how could you be manipulated? What were you afraid of? What kind of flattery were you most susceptible to? How did you see yourself? How did you want others to see you? What did you feel you were lacking that only another person could provide? Where were your emotional buttons and how easily could they be pushed? What parts of yourself did you have control over and which parts were you willing to let someone else control?

Several of these questions might have been casual, but not all of them were. As the following story demonstrates, some held the power of life and death.

John E. Douglas is a former FBI special agent, the Bureau’s criminal profiling pioneer and one of the creators of the Crime Classification Manual. He is currently a consultant on criminal investigative analysis and the author, with Mark Olshaker, of Journey Into Darkness, The Anatomy of Motive, The Cases That Haunt Us, and Law & Disorder, among others. 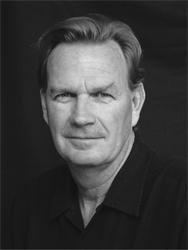 Stephen Singular has authored or coauthored seventeen previous books, including numerous New York Times and Los Angeles Times bestsellers. His titles include Presumed Guilty: An Investigation into the JonBenet Ramsey Case, the Media, and the Culture of Pornography; and Anyone You Want Me to Be: A True Story of Sex and Death on the Internet, coauthored with legendary FBI profiler John Douglas. Formerly a staff writer for the Denver Post, he lives in Denver. Visit his website at www.stephensingular.com.

Anyone You Want Me to Be

A True Story of Sex and Death on the Internet