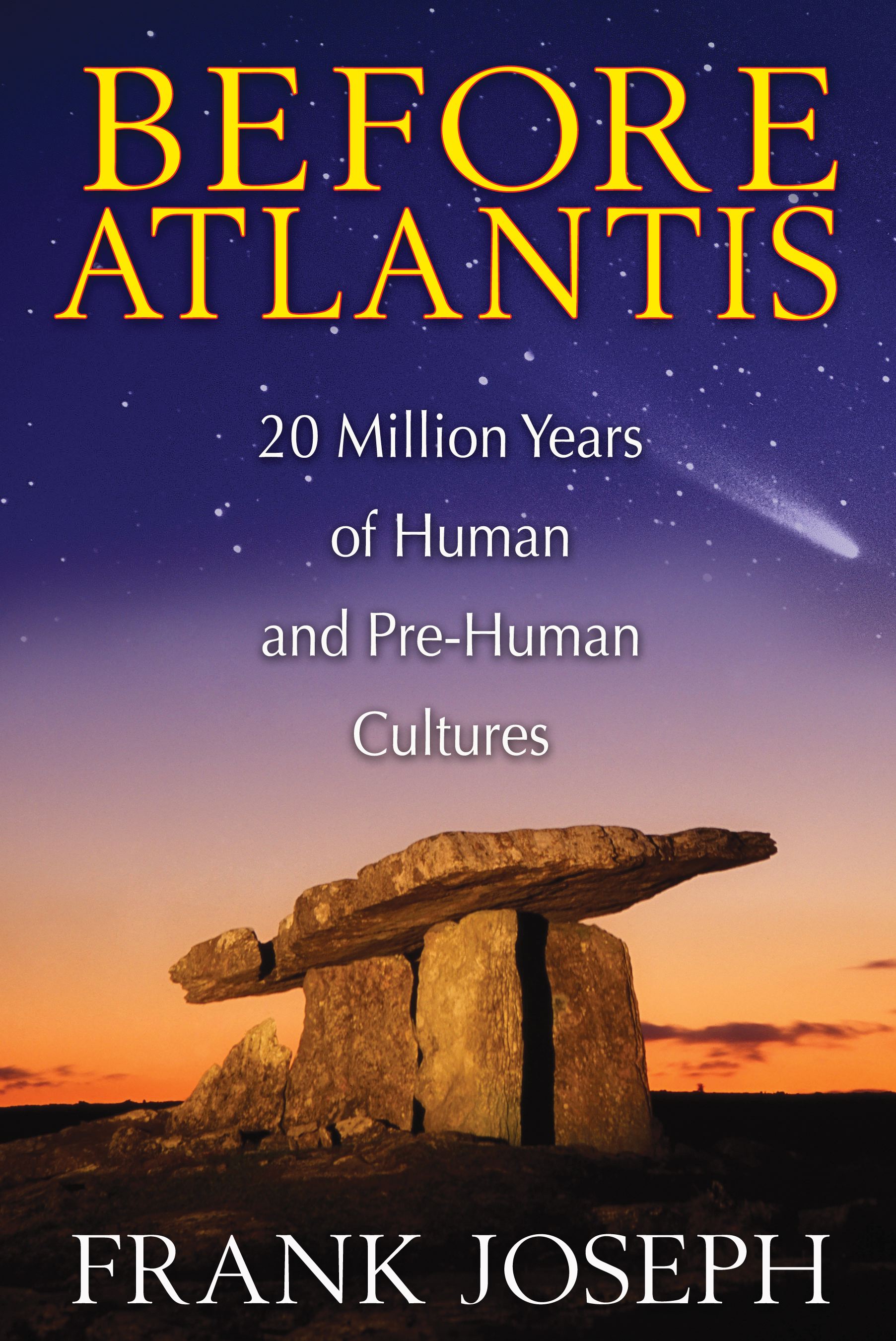 A comprehensive exploration of Earth’s ancient past, the evolution of humanity, the rise of civilization, and the effects of global catastrophes

• Traces the genesis of modern human civilization to Indonesia and the Central Pacific 75,000 years ago after a near-extinction-level volcanic eruption

• Examines the profound similarities of megaliths around the world, including Nabta Playa and Gobekli Tepe, to reveal the transoceanic civilization that built them all

Exploring emerging and suppressed evidence from archaeology, anthropology, and biology, Frank Joseph challenges conventional theories of evolution, the age of humanity, the origins of civilization, and the purpose of megaliths around the world. He reveals 20-million-year-old quartzite tools discovered in the remains of extinct fauna in Argentina and other evidence of ancient pre-human cultures from which we are not descended. He traces the genesis of modern human civilization to Indonesia and the Central Pacific 75,000 years ago, launched by a catastrophic volcanic eruption that abruptly reduced humanity from two million to a few thousand individuals worldwide.

Further investigating the evolutionary branches of humanity, he explores the mounting biological evidence supporting the aquatic ape theory--that our ancestors spent one or more evolutionary phases in water--and shows how these aquatic phases of humanity fall neatly into place within his revised timeline of ancient history. Examining the profound similarities of megaliths around the world, including Nabta Playa, Gobekli Tepe, Stonehenge, New Hampshire’s Mystery Hill, and the Japanese Oyu circles, the author explains how these precisely placed monuments of quartz were built specifically to produce altered states of consciousness, revealing the spiritual and technological sophistication of their Neolithic builders--a transoceanic civilization fractured by the cataclysmic effects of comets.

Tying in his extensive research into Atlantis and Lemuria, Joseph provides a 20-million-year timeline of the rise and fall of ancient civilizations, both human and pre-human, the evolutionary stages of humanity, and the catastrophes and resulting climate changes that triggered them all--events that our relatively young civilization may soon experience.

We as a people can’t make sense of the social, economic, and environmental deterioration developing around us because the energies that molded civilization and our very bodies and brains are not properly understood. Because of this, it’s virtually impossible to determine who we are, how we got here, or where we are going. Happily, a true history of our origins is beginning to emerge more clearly than ever before, thanks in large part to the numerous anthropological studies that have been done since Charles Darwin (1809-1882) published The Descent of Man in 1871. For the most part these discoveries confirm and elucidate our evolutionary path: that man descended from primates. However, discrepancies in the record point to many anomalies that make us physiologically different from our primate counterparts and support what may have been our hydrospheric evolution. Although an “aquatic phase” had been postulated as long ago as the sixth century BCE, here we present fresh evidence to show that early humans repeatedly returned to watery environments for evolutionary development--and to such an extent that our present physical and psychological configurations were formed by these phases.

PHYSIOLOGICAL ANOMALIES DISTINGUISHING US FROM PRIMATES

We are told that our hominid ancestors discarded their thick body hair to cool off on the hot African veldt. Yet hair is as much an insulator against heat as it is against cold, because it traps temperate air close to the skin. No other primates evolved in such a way so as to discard their hair or fur for the sake of cooling. (Male hominids supposedly became overheated during the hunt, but it was the less physically active females who became and still remain less hairy.)

Coupled with this hair loss, our early ancestors developed sweat glands for cooling, as well as subcutaneous layers of fat beneath the skin to keep warm, an adaptation employed by no other primate. No overriding, external stimulus compelled man to discard what was an effective temperature control mechanism (hair or fur to protect against both heat and cold) for the more cumbersome arrangement of two or three million sweat glands--far more than possessed by any other primate--and subcutaneous fat. From an evolutionary standpoint, this seems retrograde.

Nor did man develop verbal communication as a result of hunting, despite the intense social interaction it entailed. This is because visual cues are far more appropriate when hunting due to the fact that silence prior to an attack is essential. Tool making is sometimes cited as the inspiration for our first language. But the manufacture of tools is far better demonstrated than explained, even today.

There are other anomalies in our modern theories of human evolution. When mammals or birds relocated from an arboreal to a terrestrial existence, their sense of smell intensified, however man’s did not. On the contrary, it has fallen off more drastically and inexplicably by comparison. Industrial Age pollution, perfumes, pesticides, and deodorants are not to blame, because our olfactory powers had been in decline for more than 30,000 years before the advent of civilization.

Other deviations include the fact that the human female’s vaginal canal is tilted forward--at an angle differing from all other anthropoids--for the accommodation of face-to-face sexual intercourse. Life on the savannah cannot explain why this manner of copulation developed in opposition to every other primate species.

Still another evolutionary disconnect is the fact that, unlike any other denizen of the African plains, our eyes cry tears. Those who believe that the savannah was the crucible of human change are unable to identify what in the natural environment could have singled out mankind for the production of tears.

Failure to account for these and many other discrepancies in evolutionary theory persisted since they first emerged not long after Darwin’s death in 1882. Forty years later German scientist Max Westenhöfer, a professor of pathological anatomy at Berlin University, discovered what he believed was a comprehensive solution to such disturbing inconsistencies. This was his “aquatic ape theory,” which he presented during the international Anthropological Congress in Salzburg, Austria, in 1926.

The decades between World War I and World War II were electric with popular extremism--ideological, cultural, moral, and scientific--when fresh, often outrageous concepts were seriously entertained and almost as instantly acclaimed, no matter how farfetched. Westenhöfer’s view was in keeping with the wild zeitgeist of his time when he addressed his colleagues. He told them that we are separated from other primates by too many differences, resulting from an extended epoch when our pre-modern ancestors’ habitat switched from land to water before returning once more to the land. “Primitive, surviving features from an aquatic phase,” he said, “are preserved in man’s anatomy today. The postulation of an aquatic mode of life during an early stage of human evolution is a tenable hypothesis, for which further inquiry may produce additional supporting evidence.”
Frank Joseph

“Thrilling. Exhilarating. I literally found myself swept up in the impressive scholarship of Before Atlantis. It is tempting to pronounce this book as Joseph’s masterpiece, but such an accolade somehow implies a finality, the apex of a career. This book is but another major achievement in Joseph’s ever-growing library of brilliant works.”

– Brad Steiger, author of Conspiracies and Secret Societies and Worlds Before Our Own

“Making use of extensive evidence from biology, genetics, geology, archaeology, art history, cultural anthropology, and archaeoastronomy, Frank Joseph offers readers many intriguing alternative ideas about the origin of the human species, the origin of civilization, and the peopling of the Americas.”

– Michael A. Cremo, coauthor of The Hidden History of the Human Race and author of Forbidden Archeolog

“Staggering in scope, Before Atlantis provides compelling evidence that there is a much richer and deeper story of our world. By setting back the clock for our civilization and species, Frank Joseph builds a foundation on which the new history of the world will be written.”

– Steven Sora, author of The Lost Treasure of the Knights Templar and regular contributor to Atlantis

“This book closely follows some of the research done by John Anthony West and R.A. Schwaller de Lubicz that shows that some of our ancient temples were tools of transformation and of consciousness. The material in this book also brings out the extreme importance of knowing about our past catastrophic event so that we can prepare for these same events in our future. For far too long we have been kept in the dark about our human history and now the evidence is being released that we have a vast and complex past on this planet we call earth. It’s time we open our minds and hearts to our true human heritage, not the story that has been force-fed to us for centuries by patriarchal organizations with less than honorable intentions.”

“Frank Joseph, author and former editor-oin-chief of Ancient American Magazine, builds his case on the latest findings from biology, geology, archeology, anthropology and paleontology to assemble a 20-million-year time line of the rise and fall of pre-humans and human cultures...A profoundly revealing study.”

“Frank Joseph has come up with another tour de force about ancient seafarers and early migrations across the oceans in his new book, Before Atlantis.”