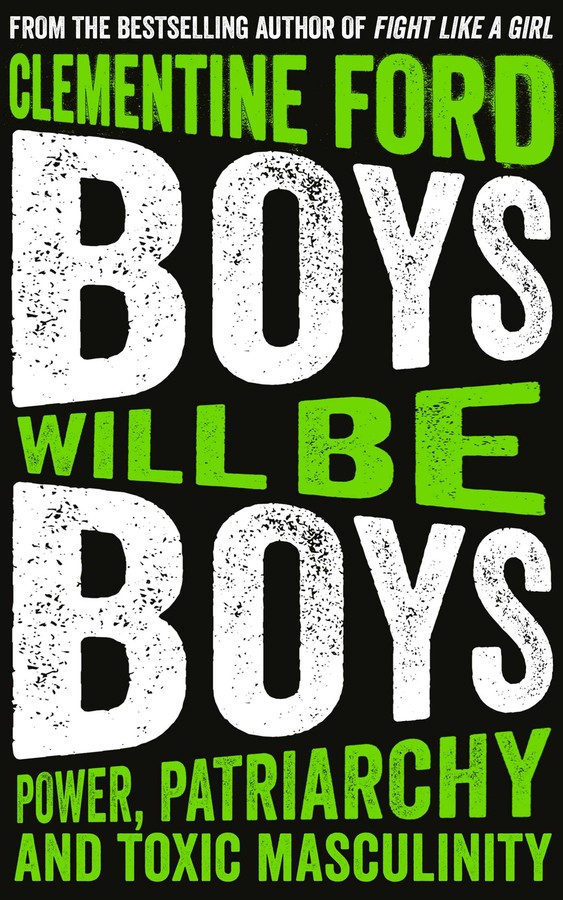 Boys Will Be Boys

The incendiary new book about toxic masculinity and misogyny from Clementine Ford, author of the bestselling feminist manifesto, Fight Like A Girl.

Boys Will Be Boys answers the question Clementine Ford is most often asked: 'How do I raise my son to respect women?’

With equal parts passion and humour, Ford reveals how patriarchal society is as destructive for men as it is for women, creating a dangerously limited idea of what it is to be a man. She traces the way gender norms creep into the home from early childhood, through popular culture or the division of housework and shines a light on what needs to change for equality to become a reality.

CLEMENTINE FORD is a writer, columnist, broadcaster and public speaker based in Melbourne, Australia

'An impassioned polemic highlighting the contrasting ways in which how boys and girls are raised harms them both.'

'A damning look at toxic masculinity. It's the most important thing you'll read this year.'

‘Ford's book, which draws on current events in Australia, the UK and the US as well as her own life as a wife and mother of a son, launches yet another furious and necessary salvo at the gender status quo while offering a blueprint for a more enlightened world. A witty polemic with significant contemporary value.’

‘Ford follows up her powerful book Fight Like a Girl with a much-needed, unapologetic study of toxic masculinity that relentlessly excavates how complicit we all are in the creation, reinforcement, and perpetuation of a "boys will be boys" mind-set.’

‘A timely cultural critic... Ford is intelligent, thoughtful, well-researched, and witty, but most importantly, she is hopeful for a future of justice and equality.’

‘Boys Will Be Boys is a timely contribution to feminist literature. Her central point is clear and confronting, and it represents something of a challenge.’

'A truly vital piece of social commentary from Australia’s fiercest feminist, Boys Will Be Boys should be shoved into the hands of every person you know. Clementine Ford has done her research – despite what her angry detractors would have you believe – and spits truths about toxic masculinity and the dangers of the patriarchy with passion and a wonderfully wry sense of humour. Read it, learn from it, and share it – this book is absolute GOLD!'

‘Clementine Ford’s Boys Will Be Boys is a blazing exploration of the frightening damage the patriarchy does to us all.’

‘Boys Will Be Boys is an impassioned call for societal change from a writer who has become a stand-out voice of her generation (and has the trolls to prove it) and an act of devotion from a mother to her son.’

‘Clementine Ford reveals the fragility behind ‘toxic masculinity’ in Boys Will Be Boys.’

'Boys Will Be Boys highlights the need to refocus on how we’re raising our boys to be better men. The ingrained toxic masculinity within society does just as much damage to our boys as it does to our girls, and this book highlights how to change that.'

'With pithy jokes and witty commentary, this is an engrossing read, and Ford’s spirited tone evokes passion for change.'

Boys Will Be Boys