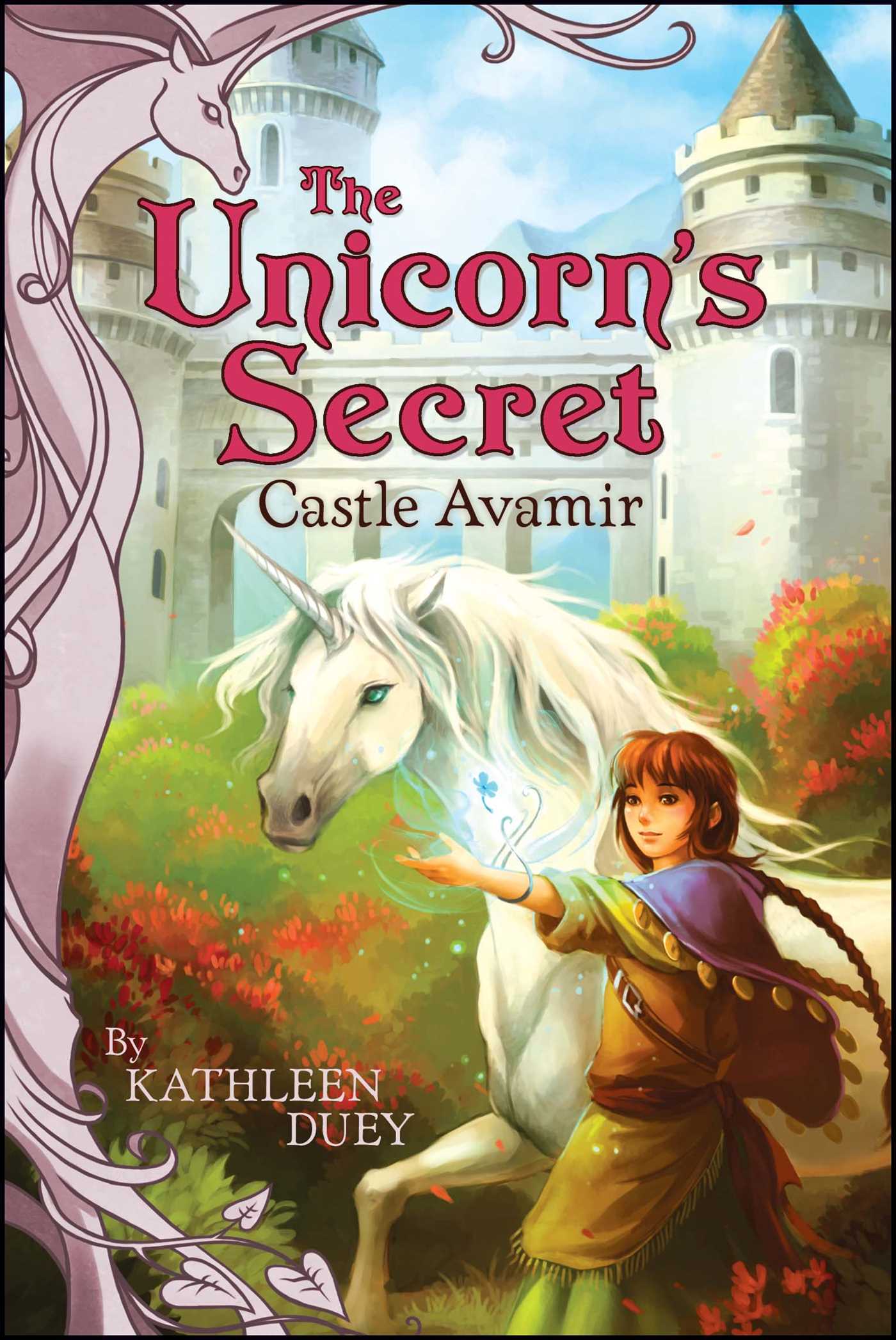 It has been a long, hard winter, and the Gypsies are glad to be leaving Lord Levin's mountains for the sunny plains of Lord Kaybale's lands. But that means time is running out for Heart. The old stories say that Castle Avamir is higher than the clouds, deep in a valley, under the stars, and over the moon.

It makes no sense -- but if Heart can't solve the riddle, she might never find a safe haven for her beloved unicorns.

Heart wiped a raindrop from the tip of her nose.

She pulled her cloak tighter and shivered.

Its wheels were half buried in mud.

Davey sat on the driver's bench.

The reins were loose in his hands. His jacket and shirt were dark with rainwater. His trousers were mud stained.

The horses were nervous and he was singing to them.

Heart brushed at her own clothes, then at Moonsilver's armor. The boots Josepha had given her were caked in mud. Everything was.

"We need a hand!" Binney was shouting. "Davey's stuck."

Groans rose from the long line of Gypsy wagons.

Heart made a face. Every muscle in her body was sore.

They had been struggling against the weather since they had left Bidenfast.

Usually, Binney said, they made it to Lord Kaybale's sheltered valleys before the worst storms hit. Not this year.

Winter in Lord Levin's mountains had been long and cruel.

They had spent months huddled in the crowded wagons.

The cold didn't seem to bother Moonsilver or Avamir. It was terrible for everyone else.

Zim had been sick for weeks, sniffling and coughing. The horses shivered and stood close together. Kip slept inside Binney's wagon, curled in a ball so tight his tail covered his ears.

Then the rains had begun.

The streams had turned into deep torrents of dark, muddy water.

There was a low, distant rumble of thunder. "Not much chance we'll sleep dry tonight," Talia called. She pointed at the dark clouds overhead. "Looks like another storm."

Heart glanced up. "It has to clear up sometime."

Talia grinned. "The sooner the better."

Heart didn't answer. She was sick of the cold, of the wet, of the wagons being so crammed with people every evening that she couldn't read or practice writing.

Tibbs had left behind a whole packet of paper.

Heart had found a hawk's feather to make a quill pen.

She knew her writing wasn't very good yet.

She could barely read it.

But she was determined to improve.

"I miss our campfires," Talia said. "None of us has practiced reading since Tibbs left. Not even you."

Heart nodded unhappily. It was true.

She hadn't told the Gypsies about Moonsilver healing Lord Irmaedith, or the storybook he had given her, and only Zim knew about Lord Dunraven's. So she had to keep them hidden.

She wanted to tell Binney everything.

But it was forbidden for commoners to have books. And one of the books in her carry-sack had been taken from Lord Dunraven's castle.

If she got caught, Heart didn't want the Gypsies to get into trouble too.

Heart glanced at her. "Everyone should learn."

Talia laughed. "The Lords of the Lands surely don't agree with that. I wonder why."

"They don't want people to know the old stories," Heart said slowly. This was something she had thought about a lot. "They want to keep all kinds of things secret."

Talia arched her brows. "Why?"

Heart wasn't quite sure why, but she knew it was true.

Heart leaned down to pat his head. "Stay here."

Slogging through the mud, Heart and Talia joined the line of people getting ready to help.

Binney and Zim had worked a rope around the back of the wagon.

Heart found a place between Talia and Josepha.

She wiped her hands on her cloak for a better grip.

On the opposite side of the mud mire another line was forming. They would hold the other end of the rope.

Four men pulled off their boots.

They rolled up their trousers.

Then they waded into the mud.

The men lined up shoulder to shoulder, their hands flat against the wagon gate.

Heart nodded along with everyone else.

Davey stood up on the footrest.

The horses leaned into their harness collars. They knew what to do.

Heart leaned backward, digging her boot heels into the muddy earth. She could hear people groaning with effort.

The men behind the wagon were bent almost double, their heads down as they strained to push.

Heart heaved at the rope.

Finally, a wet, squelching sound made her glance up. The wheels were coming free!

She gritted her teeth and pulled harder, along with everyone else.

Binney lifted her head. "Hurrah! There is no mud puddle too fierce for us!"

"You are all heroes!" Binney raised her arms like an acrobat landing a back flip. "You are the conquerors of mud and drizzle!"

The laughter came again. Heart smiled. Binney reminded her of Ruth Oakes. They would be good friends if ever they met.

Startled, Heart pushed up her cloak to stare at the woven silver threads.

Sometimes it seemed like the bracelet tightened to warn her of danger.

But nothing was wrong....

The woods were still, except for the sound of the falling rain.

The Gypsies were all smiling, trudging back to their wagons.

Avamir and Moonsilver were walking calmly toward her.

Kip trotted with them, his ears plastered flat with rainwater. Heart pulled her cloak close around her shoulders.

Kathleen Duey’s works include the middle grade American Diaries and Survivors series, as well as the well-reviewed chapter book series The Unicorn’s Secret and its companion series, The Faeries’ Promise. She is also the National Book Award–nominated author of Skin Hunger. She lives in Fallbrook, California.

More books in this series: The Unicorn's Secret