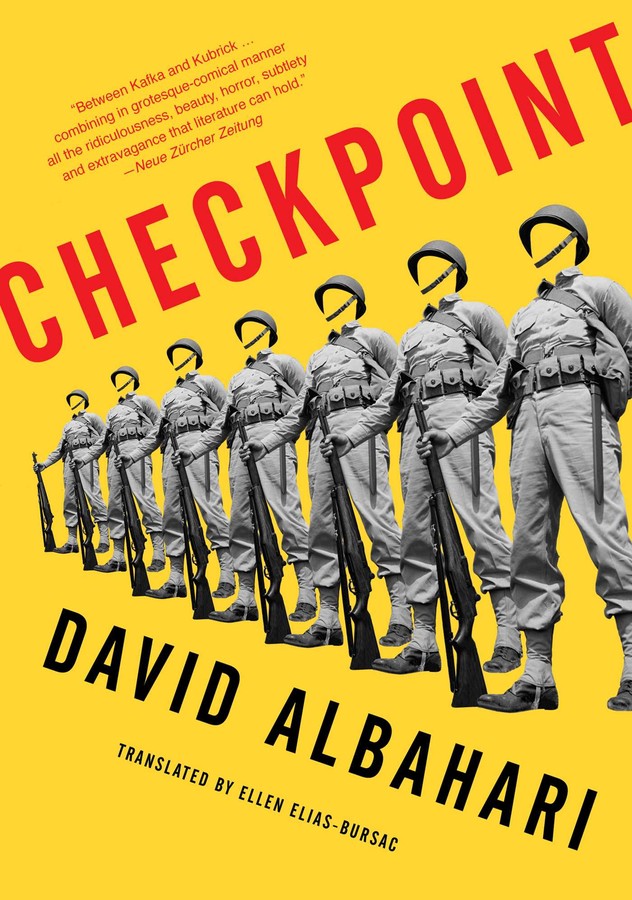 From the award-winning Serbian author David Albahari comes a devastating and Kafkaesque war fable about an army unit sent to guard a military checkpoint with no idea where they are or who the enemy might be.

Atop a hill, deep in the forest, an army unit is assigned to a checkpoint. The commander doesn’t know where they are, what border they’re protecting, or why. Their map is useless and the radio crackles with a language no one can recognize. A soldier is found dead in a latrine and the unit vows vengeance—but the enemy is unknown. Refugees arrive seeking safe passage to the other side of the checkpoint, however the biggest threat might be the soldiers themselves. As the commander struggles to maintain order and keep his soldiers alive, he isn’t sure whether he’s fighting a war or caught in a bizarre military experiment.

Equal parts Waiting for Godot and Catch-22, Checkpoint is a haunting and hysterical confrontation with the absurdity of war.

“Brilliant, weird, and audacious... Anyone who cares about world literature must read David Albahari.”

– Alex Gilvarry, author of From the Memoirs of a Non-Enemy Combatant

"A satirical take on war in the vein of Catch-22 and Slaughterhouse Five, Serbian author David Albahari’s Checkpoint is shocking and comic in equal turns, skillfully pulled together by the force of Albahari’s wit.... Visceral, wild, and often hilarious, Checkpoint is a dark delight."

“A platoon of soldiers assigned to maintain order winds up doing anything but in this pointed military satire….the book is a worthy descendant of The Good Soldier Svejk and Catch-22, though when Albahari gets dark (as every military satire must), he gets very dark; rapes, beheadings, and vicious stabbings are all part of the territory…. There's no questioning his passion on the subject. An honest war story only emerges ‘once it conforms to the government's truth,’ he asserts. This novel celebrates fiction's capacity to critique the party line.”

“Checkpoint is a tornado of a book. David Albahari, a noted Serbian author who lives in Canada, muscles this Kafkaesque short novel into the war-is-absurd literary tradition in one tremendous 183-page paragraph…. Comic and absurd scenarios alternate with episodes of fear, confusion, and horrific violence as the 30-man unit tries to make sense of a mission they don’t understand. They can’t communicate with their central command to get updated orders or news. They encounter enemies and refugees whose nationalities and languages they can’t identify. Amid all this haze, the narrator is free to free-associate…. Throughout the novel, the dirty realities of war mingle inextricably with such intrusions from the mystical and the imaginary. In the midst of slaughter, rape, and betrayal, the commander is visited by images from movies, literature, his past. When his men die he cries, he vomits, he collapses. Yet they remain as respectful and loyal as soldiers in a fairy tale…. Stylistically, JP Donleavy and Gary Shteyngart come to mind at times, while imagistically one might think of Goya, Picasso, or the Surrealists. But Albahari has a distinctive voice, and it comes through vividly in Ellen Elias-Bursac’s able translation from the Serbian.”

“[Albahari] unfolds events like a fever dream, seamlessly weaving brutality and comedy. His vision of war is a grim fairy tale without a moral lesson, and a warning for an age of reconstituted borders.”

“Albahari’s novel is a decidedly harrowing one, moving from a straightforward account of men at war into a more surreal, even symbolic, place. The blend of modern concerns and the tone of a bleak fable recalls the works of Magnus Mills and Manuel Gonzales, but there’s something more sinister present here as well. In its final pages, this novel takes a bravura turn, adding another layer atop all that’s gone before and closing on an absolutely harrowing note.”

“[Checkpoint] is a book that shows war in all its horror and its pointlessness and will surely be added to the roster of great anti-war novels.”

“Albahari makes us feel how fiercely the present needs to know the past. The present is an expression of the past, whether we know what it was or we don’t, and when there exists only a void between us and our antecedents, he suggests, it is this void, rather than what ought to be our own lives, that will claim us. The book is a sophisticated meditation on the inextricability of historical memory and identity; it is also a gorgeous work of the imagination about an act of imagination. The tone is pure, as strange as can be, and hypnotizing.”

“The book's single paragraph encourages reading it in one sitting…. Even translated from his native Serbian, Albahari's prose has the contemplative, textured quality of such Eastern European writers as Kundera.”