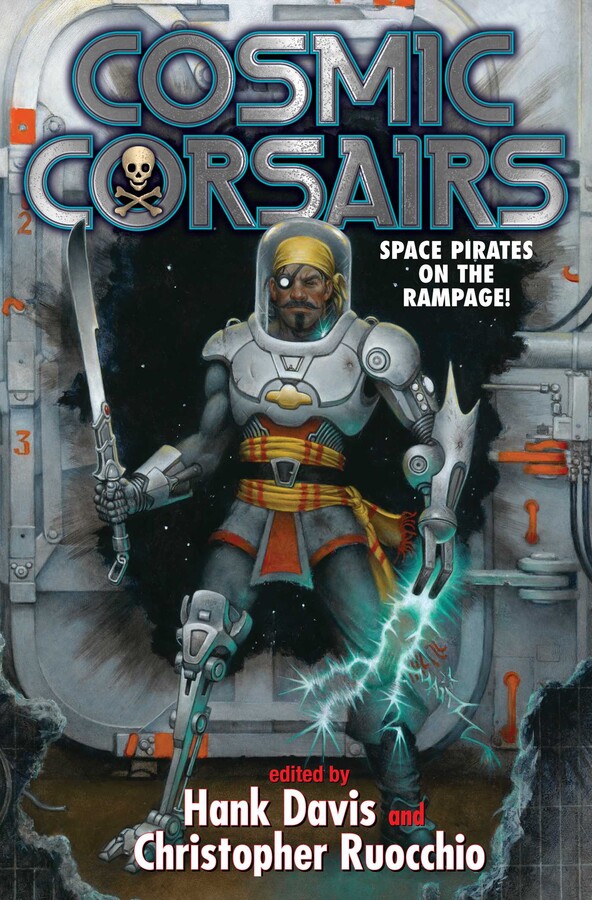 NEW FICTION AND CLASSICS OF THE GENRE COLLECTED BY THE EDITORIAL TEAM BEHIND SPACE PIONEERS AND OVERRULED!

Words that conjure up rousing tales of adventure, derring-do, and brave heroes battling the scurvy vermin of the galaxy. Those vermin have taken to pillaging cargo ships and, even worse, space liners, relieving the helpless passengers of their valuables, and worse with the comely women passengers, then spacing the lot—unless one or more of the aforementioned brave heroes arrive in the nick of time and turn the tables, making the spaceways safe again for the innocent and helpless. On the other hand, perhaps the pirate captain is a woman, and it’s the comely male passengers who need rescuing. And on the third hand (we’re talking space pirates here, possibly aliens with four or more arms), perhaps those ships traversing the interstellar void are not so innocent, and the pirates, fighting an evil despotic star empire and defending the freedom of the space lanes, are the good guys and gals. The possibilities are many, and the daring exploits set the blood racing in the veins of any reader with even a trace of buccaneering spirit in their hidden self.

So board a battered but spaceworthy fighting starship with such star-spanning and award-winning crewmates as Robert Silverberg, Elizabeth Bear and Sarah Monette, Larry Niven, Fritz Leiber, and Sarah A. Hoyt, plus James H. Schmitz, Leigh Brackett, Stanley G. Weinbaum, and more, and set sail—er, thrusters—for a universe of freebooting adventure!

About Cosmic Corsairs:
“Who doesn’t like space pirates? (Well, their victims I guess, but that’s beside the point.) . . . Hank Davis has a fine sense for choosing a wide mix of stories, and this book is no exception. No story is like another, yet they manage to form a whole greater than the parts. From sapient ships to piratical sibling rivalry, pirate detectives to ingenious captives seeking freedom, from alien biology to orbital mechanics, the stories share some of the same elements—pragmatic thinking, moral complexity, loyalty, and betrayal. Definitely a fun one.”—Analog

In Space No One Can Hear You Scream:
“[T]he 13 tales in this collection blend sf with horror to demonstrate the resiliency of both genres . . . offers strong tales by the genre’s best storytellers.” —Library Journal

A Cosmic Christmas 2 You:

As Time Goes By:

“As Time Goes By . . . does an excellent job of exploring not only romance through time travel—relationships enabled or imperiled by voyaging through time—but the intrinsic romance of time travel itself. . . . The range of styles and approaches is as wide as the authors' sensibilities and periods might suggest . . . full of entertaining and poignant stories . . . ” —Alvaro Zinos-Amaro, IntergalacticMedicineShow.com

“[S]pectacular space battles and alien contacts . . . themes of military ethics, the uses of artificial intelligence, and the limits of the capacity of the human mind. . . . It is the human interactions and decisions that ultimately drive the stories. . . . Will appeal to fans of military and hard science fiction and any readers fascinated by the possibilities of space travel.”—Booklist

“[S]tories of giant spaceships at war, at peace, and in the often-gray areas between. . . . A worthy addition to a long tradition of ship-based fiction, and its authors portray captains, arcane astrogators, and civilian child passengers with equal depth. It’s recommended for fans of military SF and space adventure.”—Publishers Weekly

“[Y]ou’d probably expect some tight, action-filled space opera stories of giant space battles . . . and there’s some of that. But there are also espionage stories, rescue missions, political conflicts, alternate histories, even a few humorous tales. . . . Each author took the premise in a different direction . . . if I had to identify one common feature to all the stories, it would be that they’re all fun. . . . Like it says, big ships blowing things up. What’s not to like?”—Analog