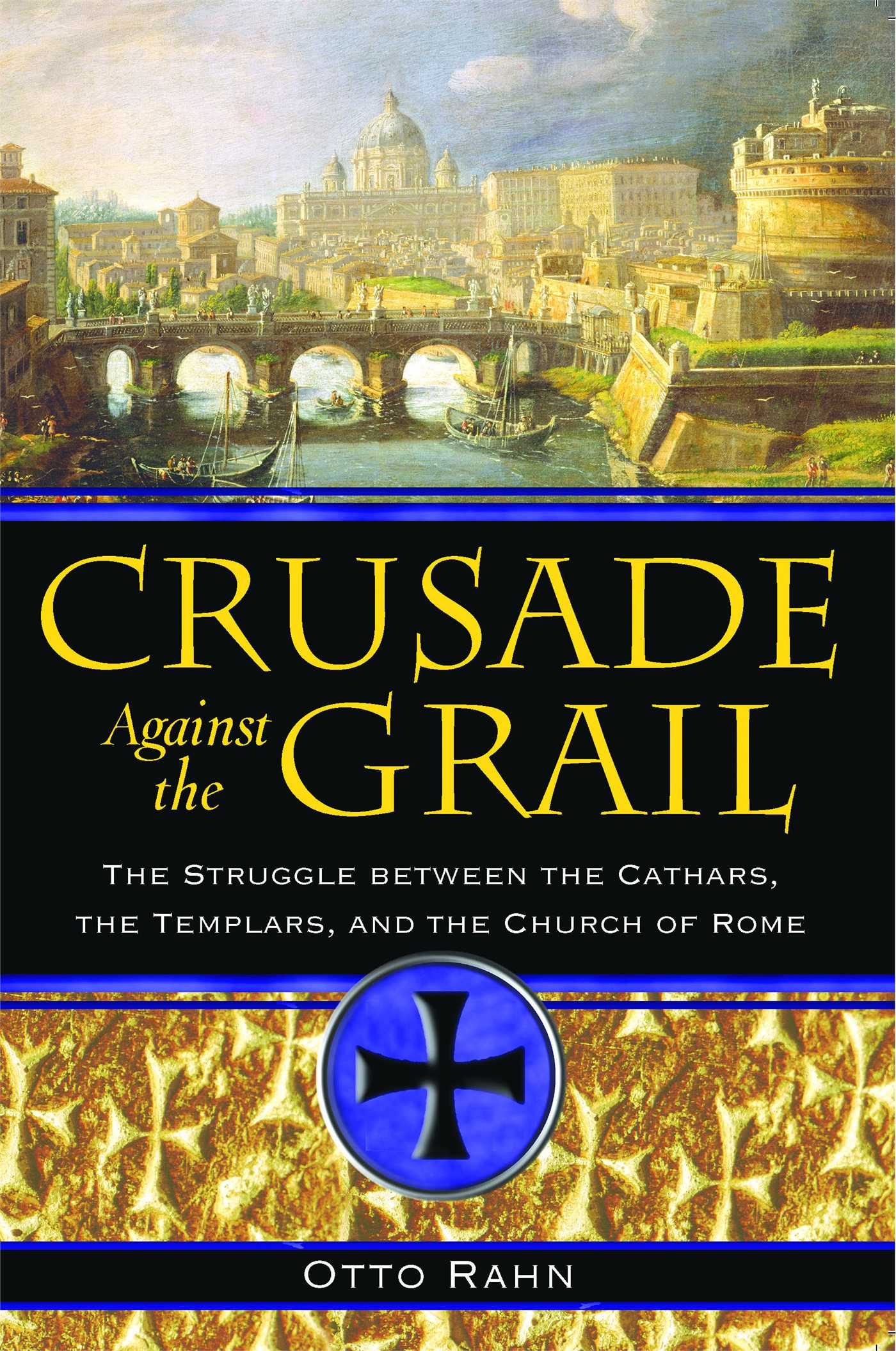 Crusade Against the Grail

The Struggle between the Cathars, the Templars, and the Church of Rome

Crusade Against the Grail is the daring book that popularized the legend of the Cathars and the Holy Grail. The first edition appeared in Germany in 1933 and drew upon Rahn’s account of his explorations of the Pyrenean caves where the heretical Cathar sect sought refuge during the 13th century. Over the years the book has been translated into many languages and exerted a large influence on such authors as Trevor Ravenscroft and Jean-Michel Angebert, but it has never appeared in English until now.

Much as German archaeologist Heinrich Schliemann used Homer’s Iliad to locate ancient Troy, Rahn believed that Wolfram von Eschenbach’s medieval epic Parzival held the keys to the mysteries of the Cathars and the secret location of the Holy Grail. Rahn saw Parzival not as a work of fiction, but as a historical account of the Cathars and the Knights Templar and their guardianship of the Grail, a “stone from the stars.” The Crusade that the Vatican led against the Cathars became a war pitting Roma (Rome) against Amor (love), in which the Church triumphed with flame and sword over the pure faith of the Cathars.

from PART III. CRUSADE AGAINST THE GRAIL

CHRISTIANITY IN ITS ENTIRETY wanted to march against Provence and Languedoc to suppress once and for all this scandalous situation that had resisted all the Church’s efforts to remove it for nearly three generations.

On June 24, 1209, the crusaders left Lyon and followed the Rhône River downstream: 20,000 knights and more than 200,000 citizens and peasants, not counting the clergy and the merchants, headed for Occitania.

At its head rode the somber and implacable Archabbot of Cîteaux, the “chief of the Christian armies against the Albigensian heretics.” With his monk’s cowled habit swept back by the wind, this apocalyptic knight galloped toward a country that did not worship his God. Behind him, the army of archbishops, bishops, abbots, priests, and friars sang the Idies irae. Together with the princes of the Church marched secular princes with their magnificent armor of steel, silver, and gold. Then came the bandit-knights with their ramshackle armaments. Then the citizens and peasants, and behind them the dregs of all Europe: the ribautz (ruffians), the truands (crooks), and the prostitutes of the lords of all the nations.

In a speech delivered on September 1, 1883, Pope Leo XIII declared that the Albigenses had attempted to overthrow the Church by force of arms. She had been saved, continued the Holy Father, not by military force but through the prayer of the holy rosary of the Blessed Virgin Mary, a rosary that was the invention of Domingo de Guzmán.

This has nothing to do with the truth. Through the chronicles of Guillermo de Tudela and Pierre de Vaux-Cernay, both enthusiastic members of the crusade, let’s accompany the soldiers of Christ in Occitania and penetrate the wildest Pyrenean vales and the darkest caves where only death reigned.

Despite its obvious religious motives, the crusade against the Albigenses was fundamentally a war between northern and southern France. The nobles of the north were burning to complete the unification of the country, a task initiated seven hundred years before by Clovis I, France’s first king. And the people of the south, both Catholics and heretics, unanimously opposed such an invasion, despite the multiple venalities of which their own nobility and cities were capable. There was no religious hatred between the Catholics and the heretics in the Midi. Heretics and Catholics (naturally, I am not referring to the clergy) lived side by side in peace. Very rarely did orthodox Occitanians give any help to the crusaders (here again, we are dealing with laymen). It would have been logical for Occitania’s Catholics to receive the crusaders as liberators from the domination or tyranny of some hated enemy belief, but this was not the case. For the Occitanians, secular tolerance had become a custom, and the love of the land was stronger than religious contradictions.

The young Raimon-Roger of the House of Trencavel, Viscount of Béziers and Carcassonne, rode to meet the crusaders. He tried to avoid disaster for his two towns, but he had to return without achieving his goal. In Béziers, his subjects surrounded him:

“Is there any hope?”

“Fight to the death! God be with you!”

And he continued galloping toward Carcassonne.

Béziers awaited the arrival of the crusaders. A dragon belching fire and destruction was coming closer in a deafening march.

An aged priest asked to enter the city. It was Reginald de Montpeyroux, the bishop who had joined the crusade.

“The crusaders are about to arrive,” said the old priest; “give us the heretics; if not, you will all perish.”

“Betray our brothers? We would rather be cast to the bottom of the sea!”

The bishop mounted his mule and left the town. The unexpected answer provoked such a seizure of anger in the Grand Prior of Cîteaux that he swore to erase with blood and fire both Catholics and heretics, and not to leave a single stone on top of another.

On the afternoon of July 25, the crusaders were in sight. Impatient for their plunder, the ribautz and truands rode toward the town on their own initiative. For the rest of the pilgrims, there was nothing else to do but follow them. The doors gave way. As the crusaders burst into the town, the inhabitants of Béziers, both orthodox and heretic, fled in terror for the relative safety of the two churches. One of the barons asked the Grand Prior of Cîteaux how they could distinguish the heretics from the Catholics; if we are permitted to believe Caesarius von Heisterbach, Arnaud responded: Caedite Eos! Novit enim Dominus qui sunt eius! [Slay them all! God will know his own!]

In the houses of God, where priests adorned with ornaments celebrated the mass for the dead, all the inhabitants of the town were murdered: men, women, and children (“Twenty thousand,” wrote Arnaud de Cîteaux to the Holy Father). Nobody was left alive. Even the priests were burned alive before the altar. And the crucifix, along with the safety from the invaders that it represented, was smashed on the stone slab floor.

Nothing could save them; neither the cross, nor the altar or crucifix; and these crazed ruffians and beggars cut the throats of priests, women, and children. Not one, I believe escaped. Shall God receive their souls in Glory!
--GUILLERMO DE TUDELA

The town was sacked. While the crusaders were fully occupied with their work as executioners in the churches, robbers devoted themselves to pillaging the town. Then the town was set ablaze. The thick smoke blackened out the sun on this horrible day in July, a sun that, on the Tabor, was just about to set.

“God is with us!” exclaimed the crusaders. “Look, what a miracle! No vulture or crow is interested in this Gomorrah!”

The bells melted in their belfries, the dead burned in the flames, and the cathedral blew up like a volcano. Blood flowed, the dead burned, the town blazed, walls fell, monks sang, crusaders slaughtered, and gypsies pillaged. So died Béziers--and so began the Crusade against the Grail.
Otto Rahn

Otto Rahn was born in Michelstadt, Germany, in 1904. After earning his degree in philology in 1924, he traveled extensively to the caves and castles of southern France, researching his belief that the Cathars were the last custodians of the Holy Grail. Induced by Himmler to become a member of the SS as a civilian archaeologist and historian, Rahn quickly grew disillusioned with the direction his country was taking and resigned in 1939. He died, an alleged suicide, on March 13, 1939, in the snows of the Tyrolean Mountains.

"A better study of the Cathar spirituality could not be found. And beyond delving into it uniquely and sympathetically, Rahn uses it like a prism to bring out the religious conflicts of the time."

"This is a superb introduction to the Cathars and Grail mysticism and we are privileged to have it at last available in English."

"[This] is the book that popularized the legend of the Holy Grail: its first edition appeared in Germany in 1933 and presented the author's own account of his explorations. Its appearance in a new updated edition is a 'must' for understanding the history and legend of the Gail, searches for its truth, and the involvement of the medieval epic Parzival in the Cathar/Grail saga."

"Crusade Against the Grail is indeed a daring and audacious book that opens many doors to the wisdom of the Cathars, and certainly makes a trip to the hidden fortresses of the Cathars even more inviting."

Crusade Against the Grail

The Struggle between the Cathars, the Templars, and the Church of Rome