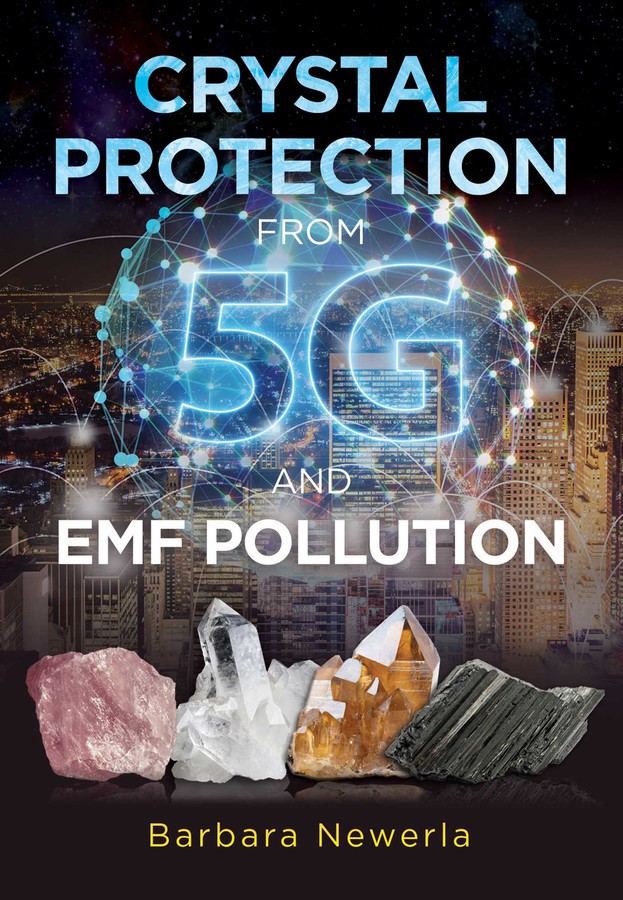 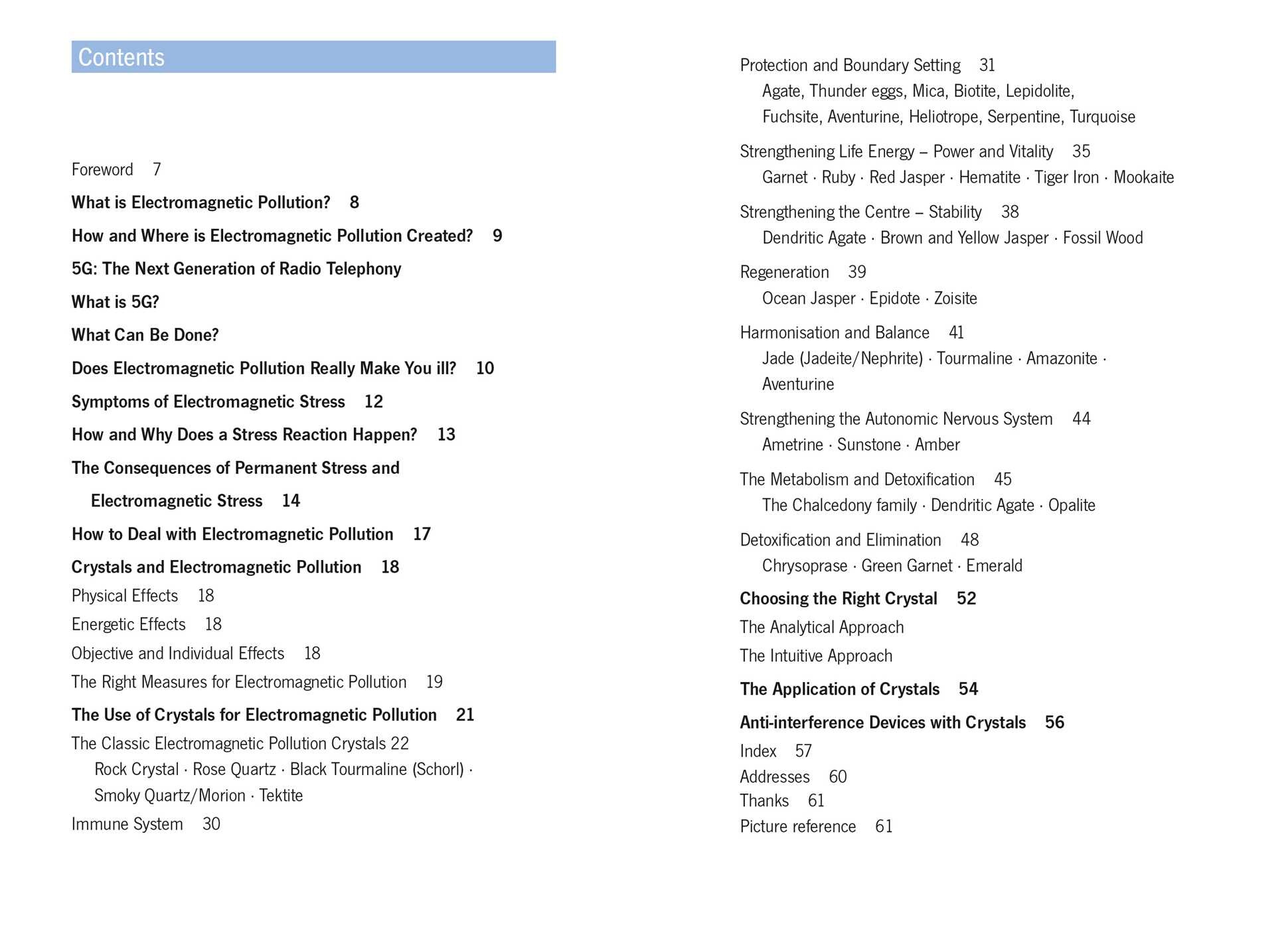 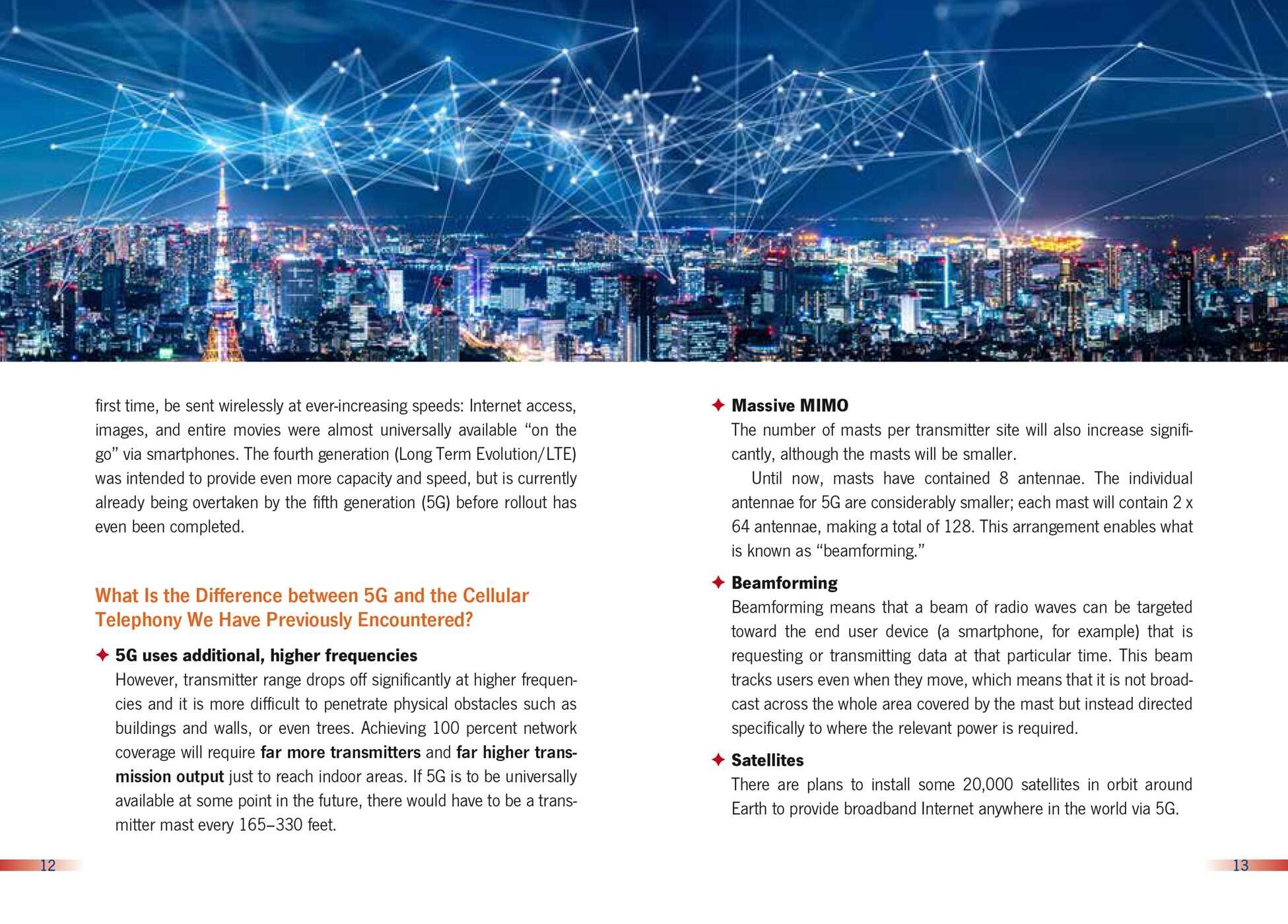 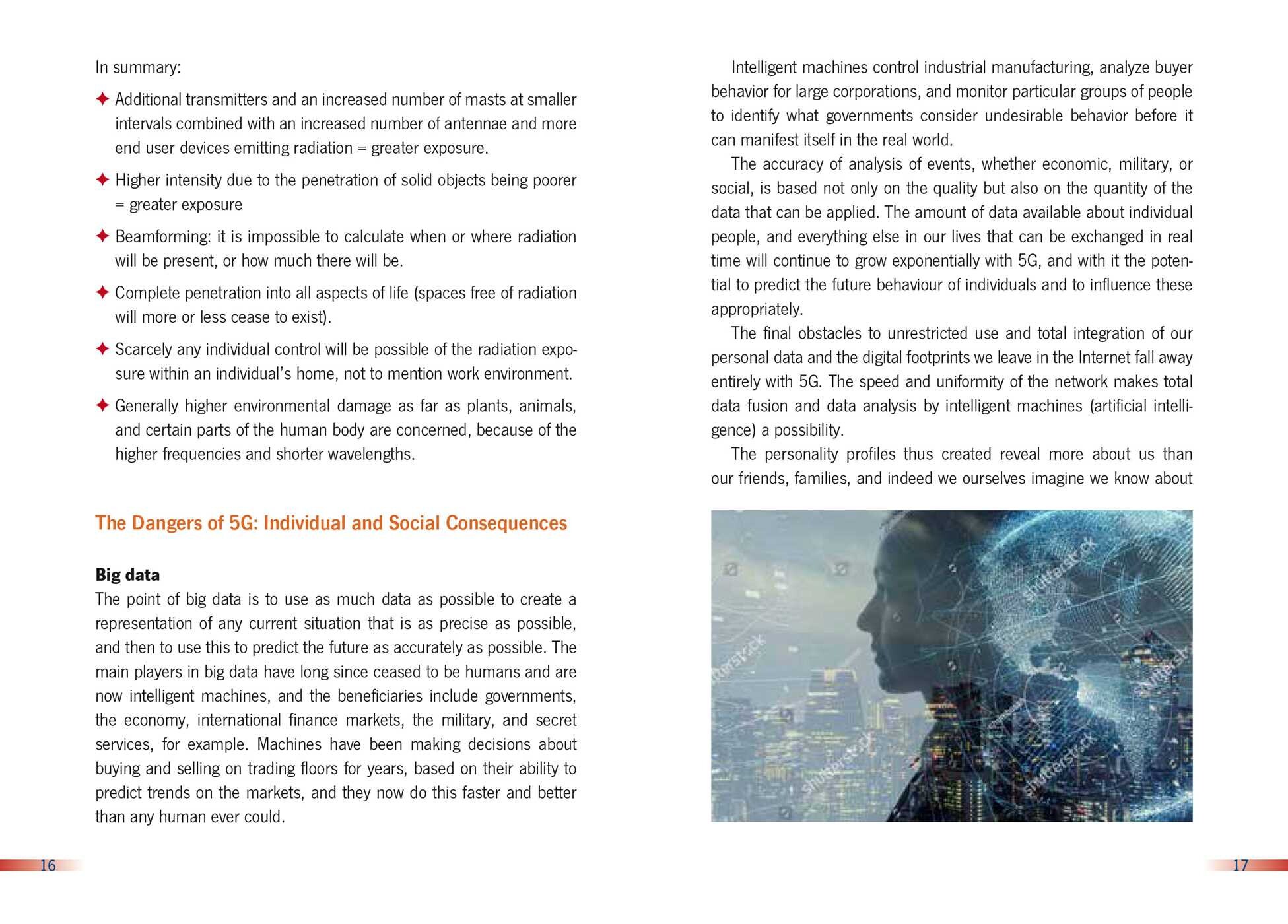 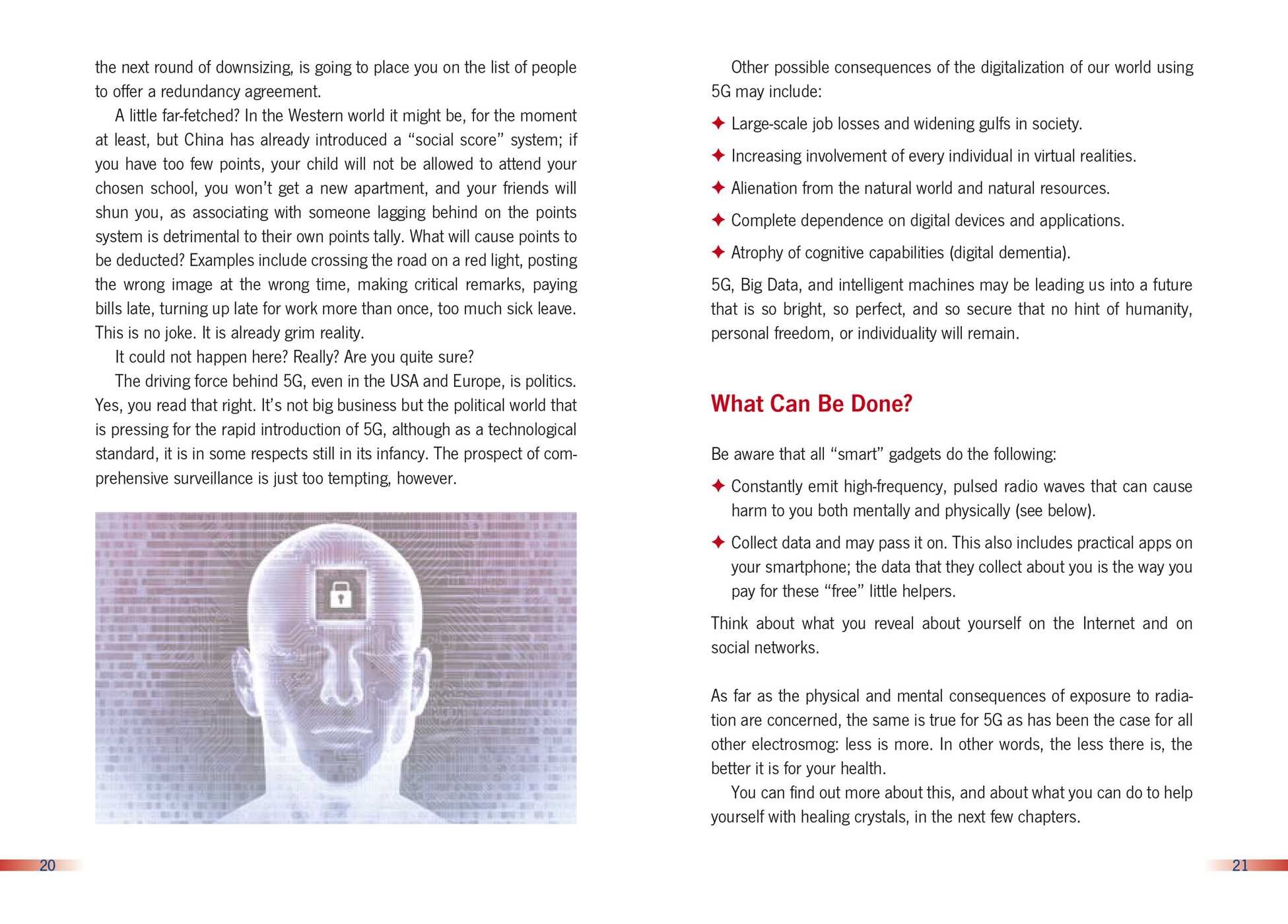 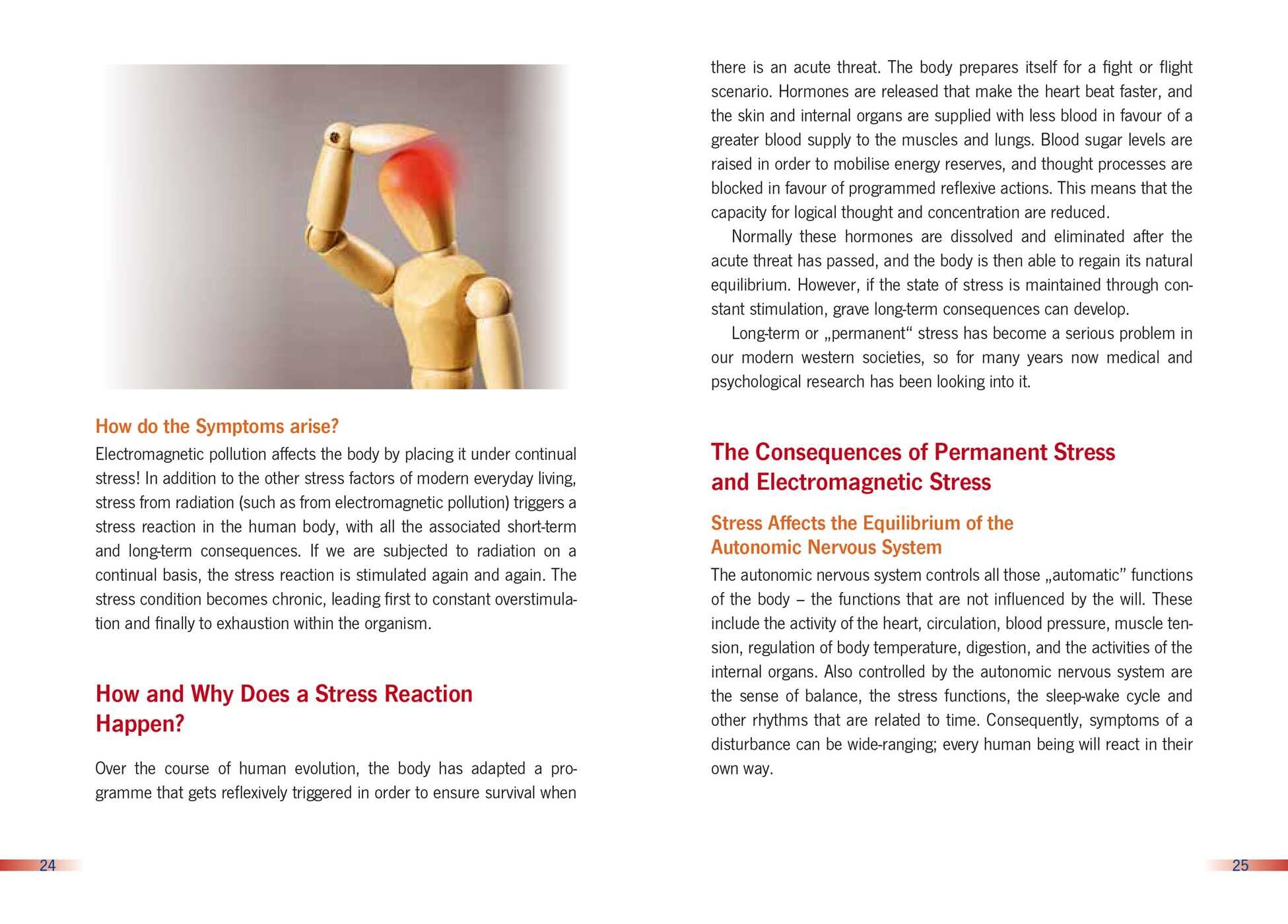 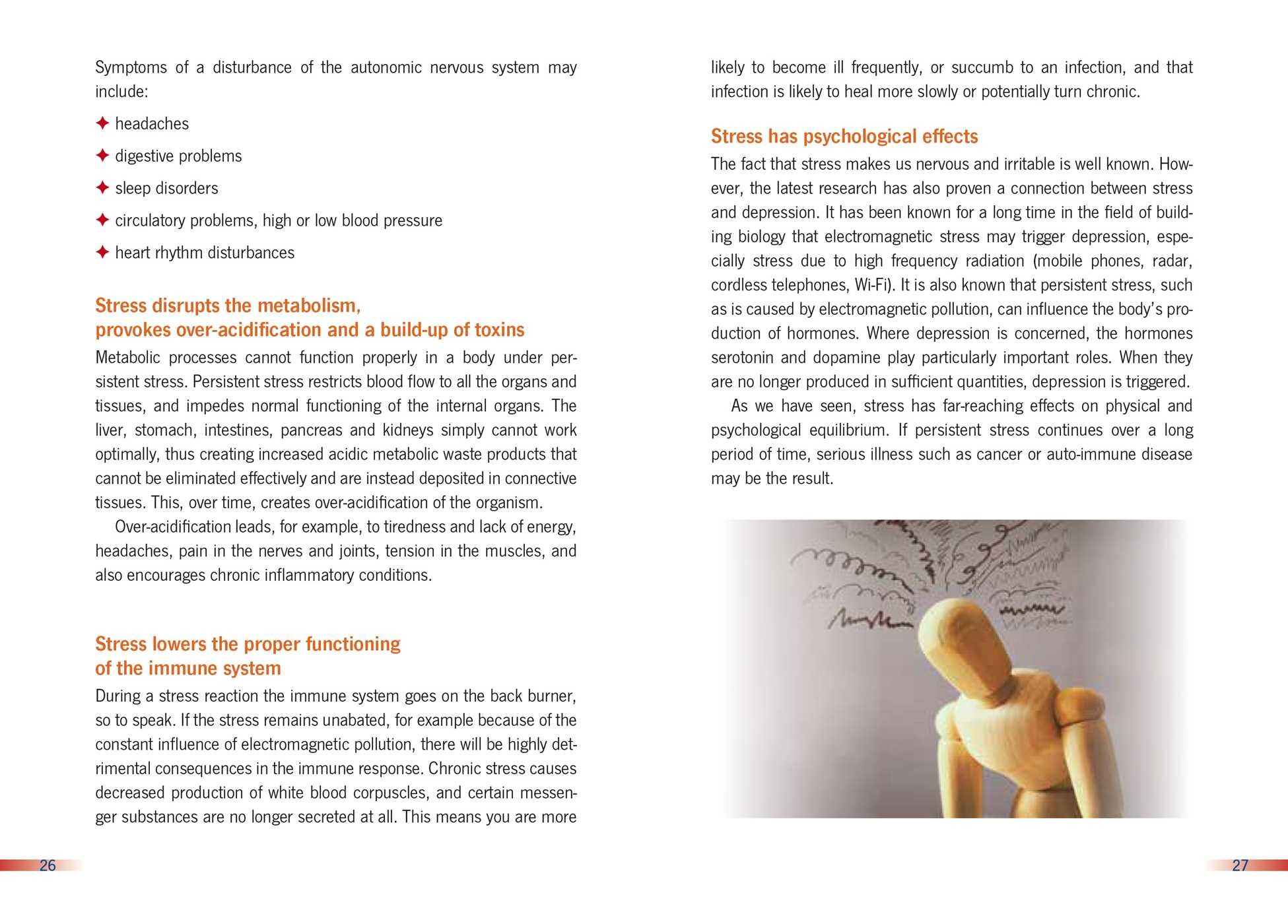 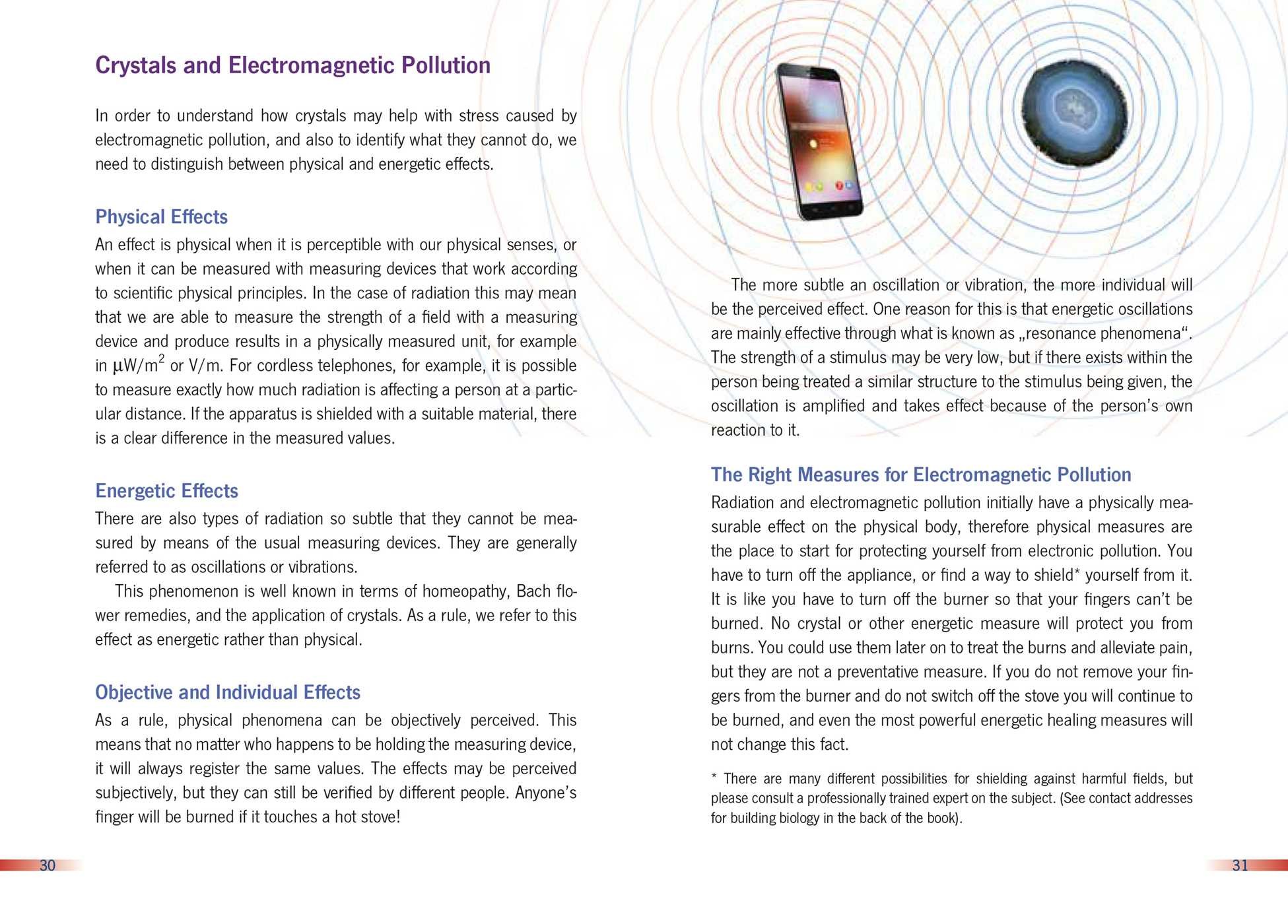 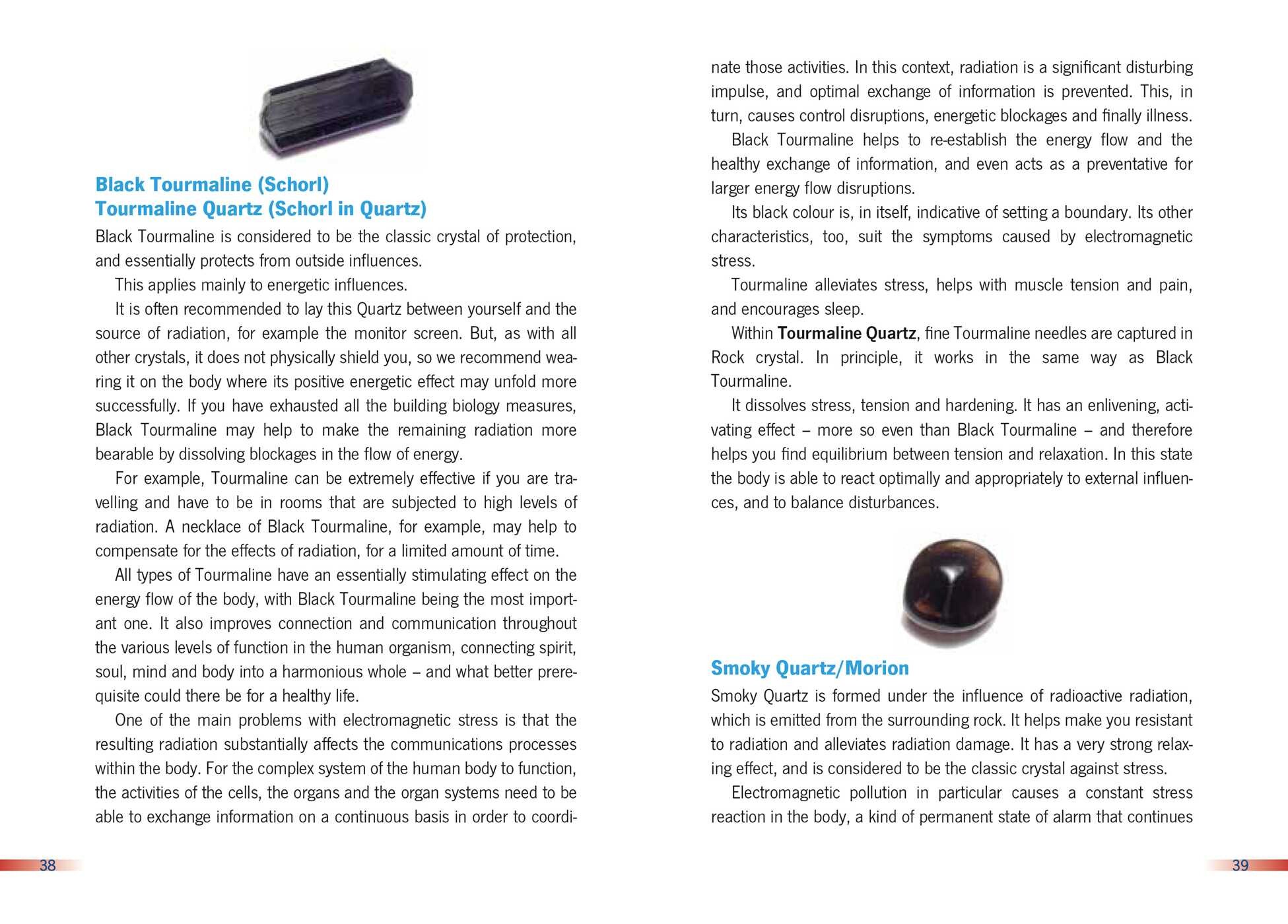 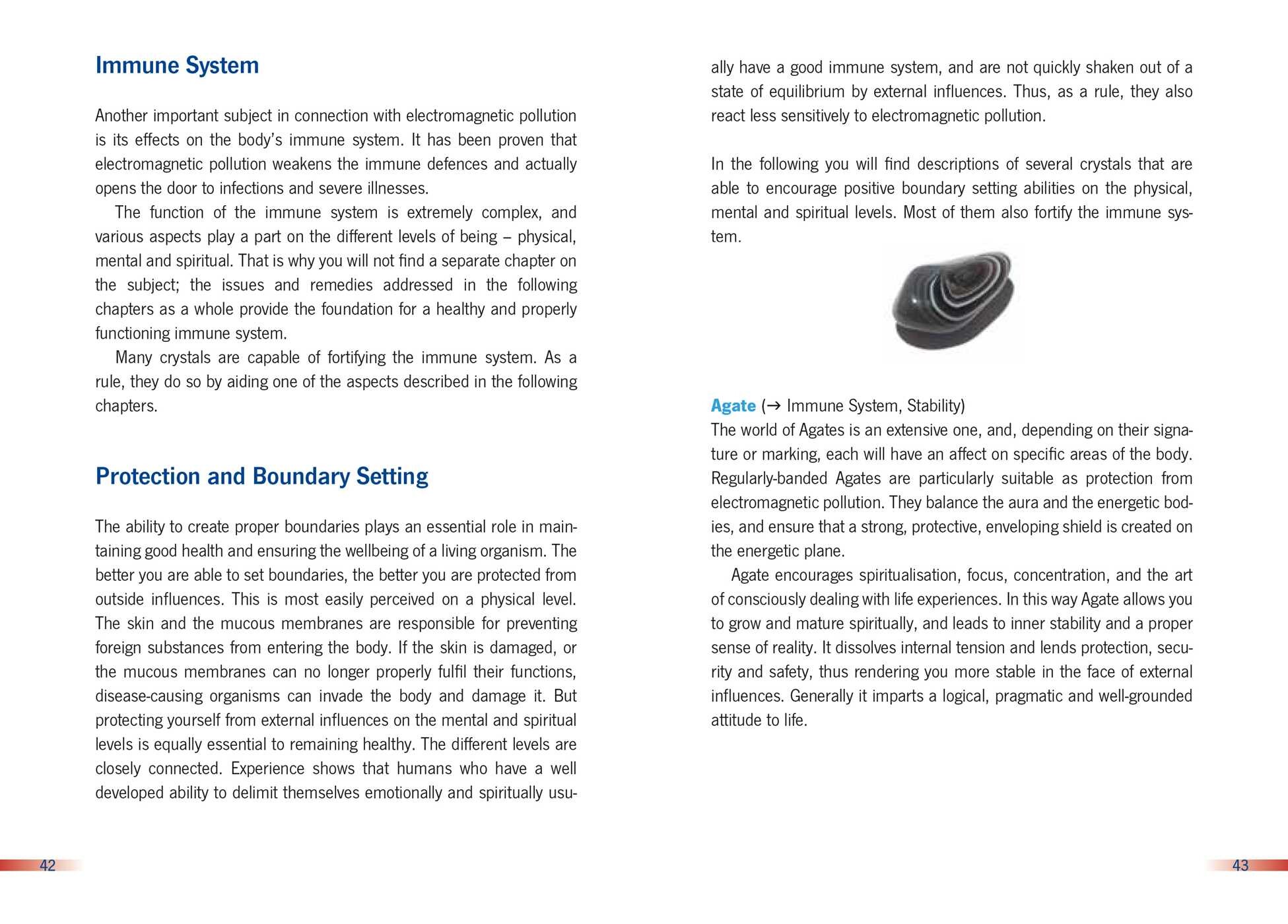 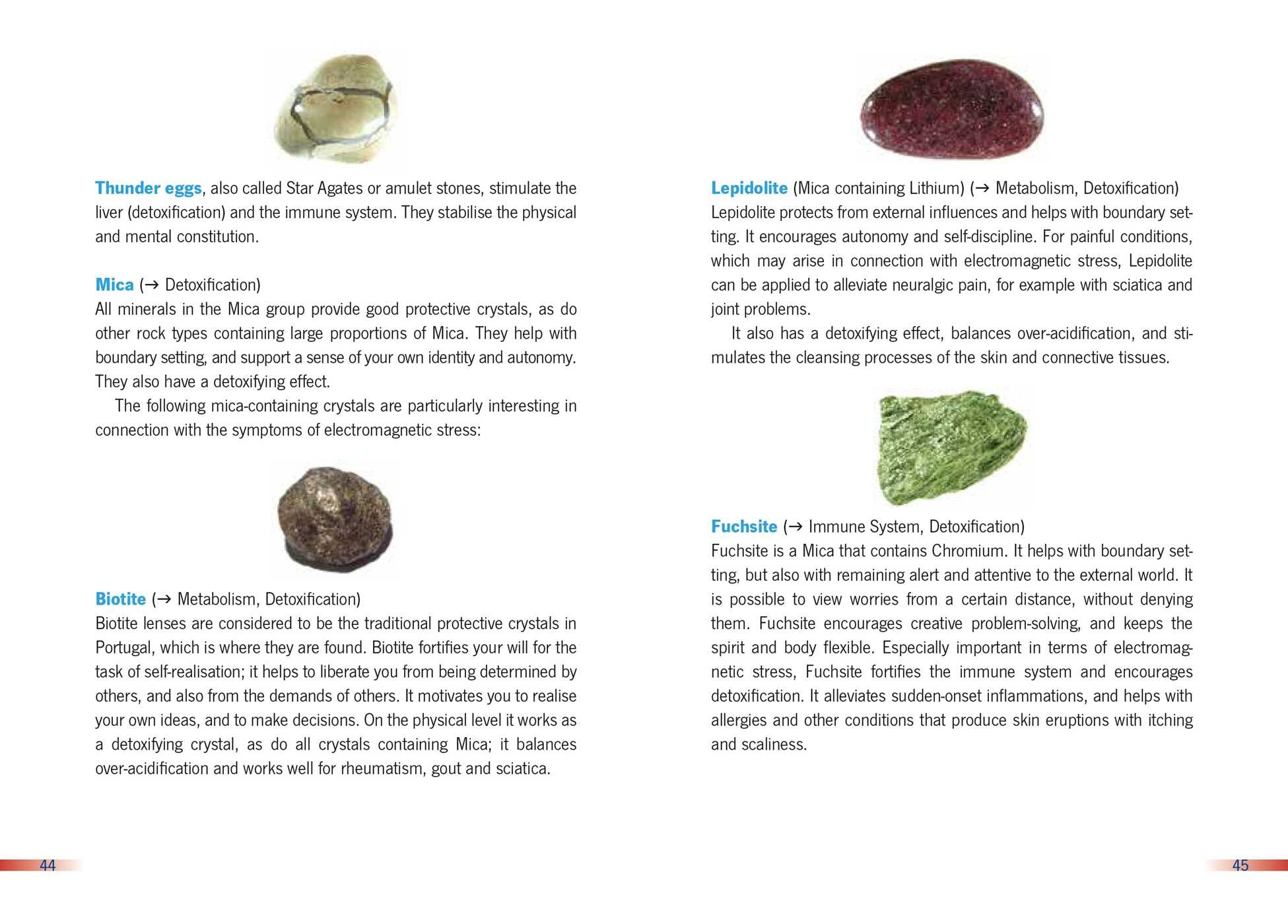 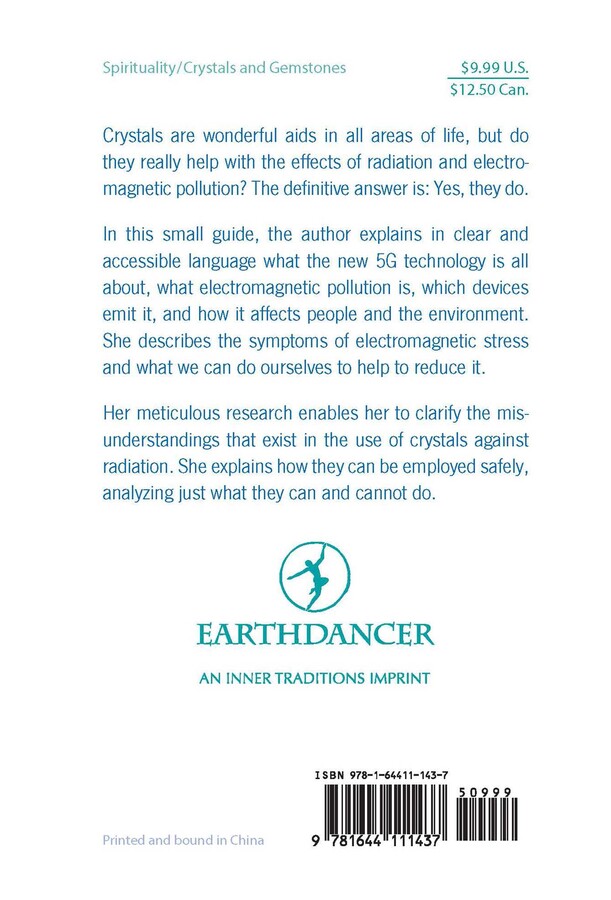 A full-color pocket guide to using healing crystals to help you handle the effects of electromagnetic fields (EMF), cell phones, and Wi-Fi

• Describes the symptoms of electromagnetic stress and explains what crystals can do to protect us, what they can’t do, and how to use them safely

From appliances, televisions, and computers to Wi-Fi and 4G and 5G cellular networks, in our modern world we are surrounded by electromagnetic fields. As the Digital Age rushes forward, we need to be aware of the increased exposure we are enduring every day and the sneaky consequences this exposure can cause to us and all living organisms.

In this full-color pocket guide to using crystals for EMF protection, Barbara Newerla explains what electromagnetic pollution is, including the potential effects of 5G technology, and how nature and humans alike are affected on different levels. Describing the symptoms of electromagnetic stress and how we can help reduce it, she explains what crystals can do to protect us, what they can’t do, and how to use them safely, debunking many misunderstandings in this area. She explores in depth the use of 5 essential anti-electromagnetic pollution crystals: tektite, smoky quartz, clear quartz, rose quartz, and black tourmaline, while also providing a directory of 35 healing crystals that can help support our bodies and minds when we’re experiencing electromagnetic stress.

This small yet practical guide is the perfect first step to combatting the unique stresses of our technologically complex world.

Radiation has become a hot button topic as never before. The explosive rise in the private use of radio technology over the last few years is a matter of considerable concern. It raises the question of what effects it might have on people and their health, not to mention the digitalization that has taken place in every aspect of our lives, with similarly unpredictable results on individuals and society in general.

However, during the triumphant advent in the 1980s of the personal computer (first in our offices and then in our private spaces), many people were already concerned about the impact of radiation from screens.

When Michael Gienger, Anja Gienger, and I started our crystal business in the early 1990s and the concept of crystal healing began to spread ever wider, it prompted us to think about using crystals to protect against radiation from screens as well. It quickly became apparent that certain crystals seemed particularly suitable for the purpose, and they are still considered to be the „classic electromagnetic pollution crystals“ today; however, new insights have since been gained in terms of how, why, and in what ways they work. And over time we have discovered that there are many more crystals that can help the human body cope with the burden of exposure to this kind of radiation.

Unfortunately there are also a lot of misunderstandings circulating regarding the use of crystals to protect against electromagnetic pollution. It is a matter of the greatest concern to me that this little book brings clarity to and sheds light on the possibilities, and also the limitations, of using crystals for this purpose.

Black Tourmaline is considered to be the classic crystal of protection, and essentially protects from outside influences. This applies mainly to energetic influences.

It is often recommended to lay this Quartz between yourself and the source of radiation, for example the monitor screen. But, as with all other crystals, it does not physically shield you, so we recommend wearing it on the body where its positive energetic effect may unfold more successfully. If you have exhausted all the building biology measures, Black Tourmaline may help to make the remaining radiation more bearable by dissolving blockages in the flow of energy.

For example, Tourmaline can be extremely effective if you are travelling and have to be in rooms that are subjected to high levels of radiation. A necklace of Black Tourmaline, for example, may help to compensate for the effects of radiation, for a limited amount of time.

All types of Tourmaline have an essentially stimulating effect on the energy flow of the body, with Black Tourmaline being the most important one. It also improves connection and communication throughout the various levels of function in the human organism, connecting spirit, soul, mind and body into a harmonious whole - and what better prerequisite could there be for a healthy life.

One of the main problems with electromagnetic stress is that the resulting radiation substantially affects the communications processes within the body. For the complex system of the human body to function, the activities of the cells, the organs and the organ systems need to be able to exchange information on a continuous basis in order to coordinate those activities. In this context, radiation is a significant disturbing impulse, and optimal exchange of information is prevented. This, in turn, causes control disruptions, energetic blockages and finally illness.

Black Tourmaline helps to re-establish the energy flow and the healthy exchange of information, and even acts as a preventative for larger energy flow disruptions. Its black color is, in itself, indicative of setting a boundary. Its other characteristics, too, suit the symptoms caused by electromagnetic stress.

Within Tourmaline Quartz, fine Tourmaline needles are captured in Rock crystal. In principle, it works in the same way as Black Tourmaline. It dissolves stress, tension and hardening. It has an enlivening, activating effect -- more so even than Black Tourmaline -- and therefore helps you find equilibrium between tension and relaxation. In this state the body is able to react optimally and appropriately to external influences, and to balance disturbances.

The function of the immune system is extremely complex, and various aspects play a part on the different levels of being -- physical, mental and spiritual. That is why you will not find a separate chapter on the subject; the issues and remedies addressed in the following chapters as a whole provide the foundation for a healthy and properly functioning immune system.

Many crystals are capable of fortifying the immune system. As a rule, they do so by aiding one of the aspects described in the following chapters.

The world of Agates is an extensive one, and, depending on their signature or marking, each will have an effect on specific areas of the body.

Regularly-banded Agates are particularly suitable as protection from electromagnetic pollution. They balance the aura and the energetic bodies, and ensure that a strong, protective, enveloping shield is created on the energetic plane.

Agate encourages spiritualization, focus, concentration, and the art of consciously dealing with life experiences. In this way Agate allows you to grow and mature spiritually, and leads to inner stability and a proper sense of reality. It dissolves internal tension and lends protection, security and safety, thus rendering you more stable in the face of external influences. Generally it imparts a logical, pragmatic and well-grounded attitude to life.

Barbara Newerla is a trained practitioner of alternative medicine with a background in shiatsu, reiki, shamanic healing, and geomancy in additional to crystals. She is the cofounder of FreiRaum, a biology and geomancy company, and offers consultations and coaching on pollution and geopathic stress.

“This small, yet highly informative guide is a full-color pocket guide to using healing crystals to help you handle the effects of electromagnetic fields (EMF), cell phones, and Wi-Fi. From appliances, televisions, and computers to Wi-Fi, and 4G and 5G cellular networks, in our modern world we are surrounded by electromagnetic fields. We need to be aware of the increased exposure we are enduring every day and the sneaky consequences this exposure can cause to us and all living organisms.”--