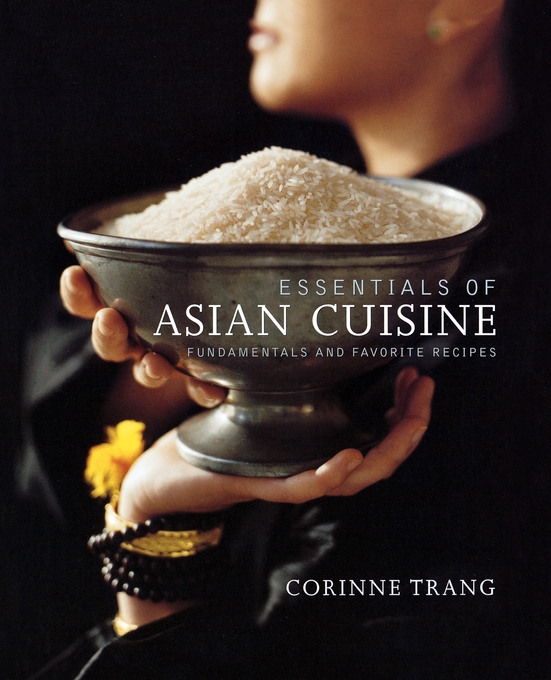 With eight major national cuisines, and dozens of regional variations, a comprehensive exploration of Asian cuisine might seem too daunting to present in one volume. But with Essentials of Asian Cuisine: Fundamentals and Favorite Recipes, award-winning author Corinne Trang successfully brings the fundamentals of Asian cooking into the home kitchen in a collection that includes both contemporary and time-honored recipes.

Trang takes the reader on a journey of Eastern culinary discovery as seen through a practiced Western culinary lens. Explaining how and why Chinese cuisine is at the root of all Asian cooking, she describes in familiar terms the techniques that incorporate the five senses and embody the Chinese yin yang philosophy of balanced opposites. Trang uses Asian ingredients commonly found in supermarkets and through mail-order sources -- such as fish sauce, lemongrass, and rice noodles -- to guide home cooks through the preparation of healthy, sensual meals. She illuminates the mysteries of authentic Asian cooking, explaining the aromatic herbs and spices that make Asian cuisine vibrant, colorful, and distinctive.

In organizing the book by type of food, Trang allows cooks to see both the common elements and the distinctive individualities of Asian national and regional cooking. Trang explains the roots of major recipes and discusses where they appear in various guises in different countries. Vietnam's Canh Ca Chua (Hot and Sour Fish Soup), for example, can also be found in Cambodian, Indonesian, and Thai cuisines; Trang provides the recipes for both the master soup and its variations.

Trang includes a comprehensive glossary of Asian ingredients, plus a detailed list of resources for purchasing special ingredients and equipment. She offers sample menus, including a Chinese Dim Sum, a Filipino Dinner, and a Japanese Lunch. A special section on feng shui demonstrates how to organize and beautifully present a meal.

In this lavishly designed and illustrated volume, more than eighty-five original black-and-white and color photographs bring to life the ingredients, dishes, and people of Asia. The book is rich with personal anecdotes and intriguing information about Asian culture, and nowhere else will you find such a clear, comprehensive, and accessible treatment of Asian cuisine. More than a cookbook, Essentials of Asian Cuisine is a celebration of exotic culinary delights.

Growing up among wonderful home cooks in the kitchens of Southeast Asia, the expatriate Chinese communities in Paris, and traditional provincial cooks in the Loire Valley of France; then expanding my circle to include chefs and restaurateurs throughout Europe, the United States, China, and East Asia, I came to see continuities between and among the great cuisines of the East that could be expressed in Western terms. This book is intended to explore those continuities. In seeking out the basic principles of China's regional kitchens, I believe it is possible to establish a way of bringing to life all of the great cuisines of Asia for any cook who cares to learn.

Western cooks are easily intimidated by Asian cooking. Ingredients seem alien, techniques unfamiliar, and languages impenetrable, even to professionals well versed in international cookery. It needn't be that way. Perhaps because I came to know both Eastern and Western cooking naturally, absorbing them as I grew up, the connections have always seemed obvious, the techniques manageable, the language issues inconsequential.

The more one looks at the cuisines of Asia, the more one realizes that they are closer than not to what we know in the West. Historically, trade routes and land bridges linked Europe, Southwest Asia, India, and Southeast Asia. For example, the Indonesian island of Java had for centuries closer ties to the cultures of Iran and, by inference, Rome than to China, which was only a few hundred miles to the north. The Dutch, English, Portuguese, French, and Spanish had as much influence as the Chinese, and the ingredients and cooking styles reflect these circumstances. Many of the most central ingredients to the cooking of China itself are of Western origin, having come by way of war and trade. Corn, peanuts, sesame seeds, potatoes, pumpkins, tomatoes, and chili peppers were transplanted from Western Europe and the Americas. Indeed, for centuries the Philippines had closer ties to Spain, Mexico, and to the United States than it did to neighboring China.

The most important lesson I took from French cuisine was its notion of structure in cooking. When one learns the "architecture" of a cuisine, the rest will follow. (Indeed, France's first chef and one of its most important culinary pioneers, Marie-Antoine Carême, was an amateur architect!) Despite the fact that there are dozens of preparation and cooking techniques, hundreds of ingredients, and thousands of traditional Asian dishes, I believe strongly that the basics of Asian cuisine can be gleaned through an understanding of Chinese cooking, and that Southeast Asian and East Asian cooking can be seen as an extension of the Chinese kitchen, colored by local traditions and Western influences. This book is intended to set down what I feel are the fundamentals that bind all Asian cuisines, to provide a way of seeing and understanding what may have at one point seemed inscrutable to the average Western cook. Essentials of Asian Cuisine contains references to both Asian and Western cooking techniques, ingredients, culinary history, and cultural context, but it is not intended as a scholarly work. Rather, I hope that the enthusiastic cook will use it as a handy tool, and find it as much in sync with today's kitchens, supermarkets, and other culinary resources as with the culinary cultures it embodies.

The basics and organizing principles of Asian cuisines can be learned. The book includes, for example, a discussion of feng shui, the overarching principle in living a harmonious life that extends to cooking harmoniously, as well as the principle of yin yang, the art of balanced opposites that is central to Asian cuisine. There are brief overviews of Eastern culinary histories and cultures, so that the reader may better understand how foods evolved over time, and the whys and wherefores of ingredients and techniques.

Fusion, which is a basic principle of all world cooking, is a subject of much interest to many contemporary chefs. In the best sense, fusion means that ingredients and techniques, flavors and textures, backnotes and overtones develop and evolve as cultures rub up against one another and people move around. This notion has held true for the peoples of Asia for millennia. Asia's history is the story of migration, displacement, population shift, colonization, and empire. Partly out of a need to survive, partly out of a need to belong, and out of a need to accept, foods are fused. And out of all these needs, wonderful dishes evolve (the best of these having developed slowly), both through trial and error and for well-thought-out reasons. Also in the best tradition, flavors and combinations of foods are understood through the process of creating a meal, rather than simply as discrete items. Fusion is not a fad; it is an essential process in the evolution of human culture, and the cooking of Asia demonstrates this wonderfully. It is hoped that this book may provide some insight into the processes and aid cooks who are interested in the use of unfamiliar ingredients.

A caveat and an aspiration: It is important to keep in mind that this book is intended as a guide to cooking principles and not an exhaustive compendium. It points the way but does not describe every culinary nook and cranny along the way. It encourages personal discovery and experiment based on understanding.

While I have touched on what I believe are the principal historical cuisines of Asia, I have not gone into great depth relative to the cooking of a few countries. This is because as political boundaries have changed, cultural connections have remained intact, and cooking traditions do not acknowledge political borders. Laotian cooking largely reflects the principles of Vietnamese and Cambodian cooking, for example. Burmese cooking reflects that of Thailand. Malaysia was, for centuries, tied to the traditions of Sumatra, Java, and the rest of Indonesia. And -- with author's emphasis -- the cooking of vast and ancient India is best seen as a separate subject entirely.

Nonetheless, where Indian influences are felt, they have been included and described. And in the cases of Laos, Burma, and Malaysia, a few recipes have been included to illustrate the particular color and tone of their national cooking.

Every recipe in this book stands on its own, so that the reader may simply select an item on impulse.

At the same time, the book can be approached as a pleasurable course of study. In addition to hundreds of recipes, there are also sections on essential ingredients, equipment and technique, food rituals, seasonal menus, and mail-order sources. From there, I encourage the adventurous cook to relax into improvisation and experimentation. In time, the essentials of Asian cooking will seem a potential part of any culinary foray. Opportunities for your own brand of fusion will arise. I hope my Asian kitchen will become part of your own.

Christopher Hirsheimer is an award-winning photographer and cofounder of Canal House. Her experience includes establishing a publishing venture, running a culinary and design studio, and publishing an annual series of three seasonal cookbooks titled Canal House Cooking. Prior to starting Canal House in 2007, in Lambertville, New Jersey, Hirsheimer was the executive editor of Saveur, which she cofounded in 1994, and the food and design editor of Metropolitan Home. She cowrote the award-winning Saveur Cooks series and The San Francisco Ferry Plaza Farmers' Market Cookbook. Her photographs have appeared in more than 50 cookbooks for such notables as Lidia Bastianich, Mario Batali, Julia Child, Jacques PÃ©pin, and Alice Waters, and in numerous magazines, including Bon Appetit, Food & Wine, InStyle, and Town&Country.