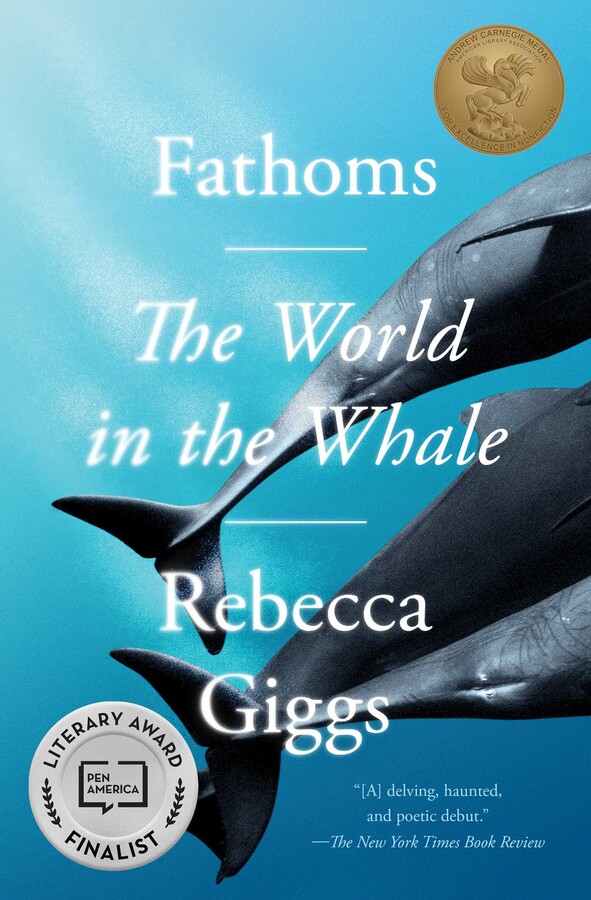 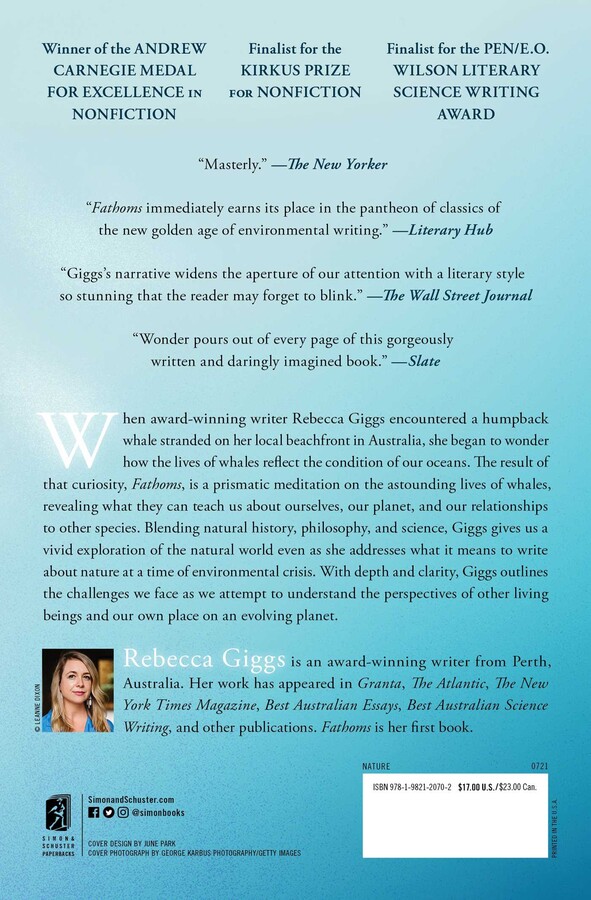 The World in the Whale

A “delving, haunted, and poetic debut” (The New York Times Book Review) about the awe-inspiring lives of whales, revealing what they can teach us about ourselves, our planet, and our relationship with other species.

When writer Rebecca Giggs encountered a humpback whale stranded on her local beachfront in Australia, she began to wonder how the lives of whales reflect the condition of our oceans. Fathoms: The World in the Whale is “a work of bright and careful genius” (Robert Moor, New York Times bestselling author of On Trails), one that blends natural history, philosophy, and science to explore: How do whales experience ecological change? How has whale culture been both understood and changed by human technology? What can observing whales teach us about the complexity, splendor, and fragility of life on earth?

In Fathoms, we learn about whales so rare they have never been named, whale songs that sweep across hemispheres in annual waves of popularity, and whales that have modified the chemical composition of our planet’s atmosphere. We travel to Japan to board the ships that hunt whales and delve into the deepest seas to discover how plastic pollution pervades our earth’s undersea environment.

With the immediacy of Rachel Carson and the lush prose of Annie Dillard, Giggs gives us a “masterly” (The New Yorker) exploration of the natural world even as she addresses what it means to write about nature at a time of environmental crisis. With depth and clarity, she outlines the challenges we face as we attempt to understand the perspectives of other living beings, and our own place on an evolving planet. Evocative and inspiring, Fathoms “immediately earns its place in the pantheon of classics of the new golden age of environmental writing” (Literary Hub). 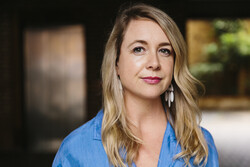 Rebecca Giggs is an award-winning writer from Perth, Australia. Her work has appeared in Granta, The Atlantic, The New York Times Magazine, Best Australian Essays, Best Australian Science Writing, and other publications. Fathoms is her first book.

"Fathoms immediately earns its place in the pantheon of classics of the new golden age of environmental writing."
—Literary Hub

“A work of bright and careful genius. Equal parts Rebecca Solnit and Annie Dillard, Giggs masterfully combines lush prose with conscientious history and boots-on-the-beach reporting. With Giggs leading us gently by the hand we dive down, and down, and down, into the dark core of the whale, which, she convincingly reveals, is also the guts of the world.”
—Robert Moor, New York Times bestselling author of On Trails: An Exploration

"Fathoms took my breath away. Every page is suffused with magic and meaning. Humanity’s relationship with nature has never been more important or vulnerable, and we are truly fortunate that at such a pivotal moment, a writer of Rebecca Giggs’s caliber is here to capture every beautiful detail, every aching nuance. She is in a league of her own."
—Ed Yong, New York Times bestselling author of I Contain Multitudes: The Microbes Within Us and a Grander View of Life

“Lyrical…Giggs’s writing has an old-fashioned lushness and elaborateness of thought. Its finest passages—and they are many—awaken a sense of wonder.”
—Washington Post

“[Giggs’s] narrative widens the aperture of our attention with a literary style so stunning that the reader may forget to blink…In a story that extends across several continents, Ms. Giggs marshals lapidary language to give the crisis a compelling voice. Her prose, like the oceans in which her subjects roam, is immersive; her sentences submerge us in a sea of sensations. A reader fond of dog-earing choice turns of phrase in Fathoms might find, at evening’s end, a book pleated like an accordion with an abundance of keepsakes.”
—Wall Street Journal

“A pround meditation...Giggs explores how whales have permeated our lives and the many ways we have invaded and transformed theirs. Each chapter orbits a different aspect of this long and fraught relationship—commodification, pollution, voyeurism, adoration, mythology—swerving wherever Giggs’s extensive research and fervent curiosity take her...Giggs’s prose is fluid, sensuous, and lyrical. She has a poet’s gift for startling and original imagery...The lushness of her sentences and the intensity of her vision inspire frequent rereading—not for clarity, but for sheer pleasure and depth of meaning. ”
—LA Review of Books

“In Fathoms, Rebecca Giggs rips the metaphors off whales and brings us closer than we can usually get to the creatures themselves. Along the way, she shows us how intimately whales are shaping our lives, how they change air quality, and crime, and even our conception of time. I can't stop thinking about the connections she has unearthed, how a whale is connected to a meteor, a mother's breast, a landfill. Under the spell of her deliciously evocative prose, you get the sense that you are truly, finally, glimpsing a whale in full glory. Like the busks she writes about—tiny missives carved into whalebone corsets by sailors—this book leaves an imprint.”
—Lulu Miller, author of Why Fish Don’t Exist and cofounder of NPR’s Invisibilia

"Rebecca Giggs' Fathoms is a triumph, a deliciously rich work of art that, as if by magic, combines exquisite prose that floats off the page and into your heart with scientific accuracy and epic scope. This is by far the best book about whales I have ever read. What an achievement!"
—Wendy Williams, author of The Language of Butterflies and New York Times bestseller The Horse: The Epic History of Our Noble Companion

"With a conservationist mindset, Giggs reiterates that the whale and its life, legacy, and precarious environmental state are reflective of the greater issues the Earth faces, from ecological upheaval to overconsumption. Whether describing the majesty of the blue whale or the human assault on sea ecology due to paper and plastic pollution, the author’s prose is poetic, beautifully smooth, urgently readable, and eloquently informative."
—Kirkus Reviews, starred review

“There is much to marvel at here…Deeply researched and deeply felt, Giggs’ intricate investigation, beautifully revelatory and haunting, urges us to save the whales once again, and the oceans, and ourselves.”
—Booklist, starred review

“In the whale, Giggs truly does find the world. She finds clues that unlock how humans have engaged nature—tales of greed, aggression, wonder, desperation, longing, nostalgia, love, curiosity and obsession. Her prose is luminous…In tracing humankind’s continuing intersection with these alluring creatures, Giggs ultimately uncovers seeds of hope and, planting them in her fertile mind, cultivates a lush landscape that offers remarkable views of nature, humanity and how we might find a way forward together.”
—BookPage, starred review

"Fathoms reads like a poem. Its virtuoso thinking is a revelation. I can’t think of many books in which love for the world and uncompromising, ever-deepening rigour come together in this way. Time slows down. This book makes a permanent dent in the reader."
—Maria Tumarkin, author of Axiomatic

The World in the Whale