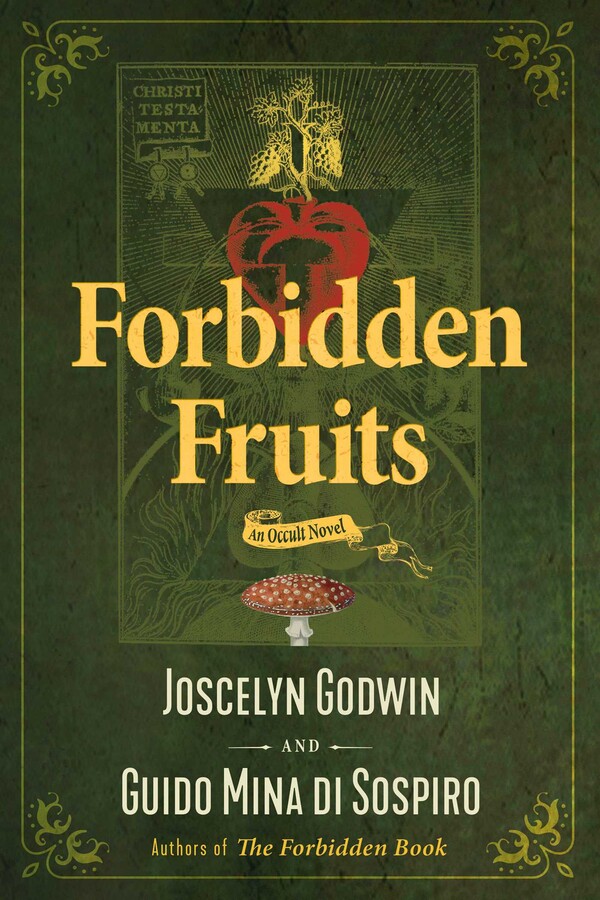 • Reveals a secret ritual at the heart of Christianity, knowledge of which was passed on underground by Gnostics and alchemists for centuries

• Explore the use of the Kykeon, the psychedelic brew of the Eleusinian mysteries, which offers those who drink it a direct experience of God

Amid the European refugee crisis, with the background of Southern Europe having become the point of arrival for hundreds of thousands of desperate migrants, Monica Bettlheim, an American archaeologist, is trying to recapture her former fame. She has a mission to uncover prehistoric cultures that conventional archaeology and history both fear and deny. Her search is sponsored by an eccentric aristocrat, the larger-than-life Maltese billionaire Sebastian Pinto.

On an underwater expedition off the coast of Malta, Monica finds a mysterious golden pomegranate that dates back to prehistoric times. Within it, she discovers ancient remnants of the Kykeon, the hallucinogenic sacrament of the Eleusinian mysteries, which offers those who drink it a direct experience of God. As the discovery leads to blackmail and murder, Monica uncovers a secret ritual right at the heart of Christianity, knowledge of which was passed on underground by Gnostics and alchemists for centuries.

Reluctantly, Monica teams up with the elusive and troubled Rafael, Pinto’s son, who for some years has been deeply immersed in esoteric studies. Driven by the need to avenge a murder and uncover the activities of an international crime syndicate, they risk their lives by reviving the sacred ritual--and are confronted by the most terrifying revelation of all.

Within the week, Dr. Monica Bettlheim set up the new apparatus on Sebastian Pinto’s yacht Dracula. For months seismographic studies, sediment corings, and remote-control cameras had been tantalizingly suggesting the presence of manmade structures on the seabed, but concrete evidence was still lacking. She feared that if they failed to find any this time, her patron would lose patience and abort the project.

Then, after a systematic two-year search around the coast of Malta, she had located a rock formation that she could no longer dismiss as natural. At 110 meters it was beyond scuba-diving depth, but the new atmospheric diving suit, virtually a manshaped submarine, allowed Joe to dive deeper without needing decompression, and to work in wired communication with the control center on the yacht.

The suit’s twin thrusters wafted him slowly among the immense stones jutting up out of the bedrock, while Monica followed his progress through a camera attached to his diving helmet. She strained to resolve the shapes that loomed through the sediment-heavy water. Could this be a monumental gateway? Was that a collapsed roof, or a solitary monolith? The voice of reason cautioned her imagination. The prehistoric temples on Malta and its daughter island of Gozo had indeed sprung up, fully formed in style and technique, a thousand or more years before Stonehenge or the Pyramids of Egypt, but this seabed had not been dry land for ten thousand years before that.

When Joe surfaced from his fourth descent, he had not been empty-handed. Now, in one of the ship’s cabins, adapted as a laboratory, Monica and Pinto were working on his astonishing discovery: three rounded jars made of black basalt, a stone harder than steel but nonetheless favored and worked by stone-age peoples. Wearing surgical gloves, Pinto focused the halogen lamp on the first vase, and gently inserted a circular blade around its stopper. With a screwing motion, he loosened the basalt plug, breaking its resin seal.

“Nothing but mud in it,” observed Joe.

“Prehistoric mud has many tales to tell,” replied Pinto, gently emptying it into a laboratory dish, and turning to the next vase.

“Hold it a moment,” said Monica, setting aside the brush and scoop she had been using. “I heard something outside.”

The three people in the cabin listened.

“What sort of sound was it?” asked Pinto.

“It sounded like… screaming.” She paused, held her mane of black hair away from her ears, and turned to and fro. “There it is again. Listen… Did you hear that?” After another silence, Joe shrugged. “Seagulls.”

“You go, Joe,” said Pinto to the wiry ex-Royal Marine. “I’ll keep working on these vases, then we can all turn in for the night.”

Joe, once on deck, made straight for the captain’s bridge and asked him to shut the engines down.

“Sorry to trouble you mate, but Monica thinks she heard noises outside. You’d better come and listen, to calm her down.”

The captain was reluctant. It was difficult sailing, as a thick fog had descended and he was steering blind, relying on radar and the GPS. At this rate they were an hour from their dock in Marsaxlokk Bay, and he had counted on spending the night at home in his own bed. Still, he stopped the propellers and came outside. Two sailors joined him. Leaning over the rail, they could hear the waves slapping as the ship slowed down, but could see nothing. Monica shivered.

“There! Did you hear it this time?”

The others were silent, straining their ears. Monica spoke again, almost in a whisper: “Those aren’t birds. They’re human voices. Can you shine a fog-light or something? We should tell Cavalier Pinto.”

“Whatever you heard, there’s nothing we can do about it,” said Joe.

“You make me feel as though I’m imagining things,” said Monica. “But I suppose you’re right. Go back to the cabin, and yes, do start the engines.”

As Joe disappeared down the companionway, Monica hesitated, then turned and stayed a while at the rail, looking into the impenetrable mist. She needed a moment to collect her thoughts.

This discovery was going to drop a bombshell on the complacent world of the pre-historians. The seabed on which the jars had been found had been dry land during the Ice Age, when Malta, Sicily, and Italy were a single landmass. Then, beginning about 16,000 years ago, the European icecap had melted and poured into the Mediterranean basin. Over five or six millennia the sea level had risen in a series of catastrophic floods, submerging whole civilizations.

It had taken Pinto’s faith in her, and his money, to make this breakthrough. And now that objects were coming up, what further secrets would be revealed? Under the specialist’s microscopes, three basalt vases full of dirt could speak volumes.

Monica descended the stairs and entered the cabin. The light of the halogen lamps dazzled her vision, and through a subtler sense she could tell instantly that the atmosphere was charged. Pinto was beaming, leaning forward on his arms over the workbench. Joe Dagenham was looking from one to the other with an expectant expression.

“Monica, my dear,” said Pinto, “I think you should sit down.”

“It’s time to break out the champagne.”

“What do you mean?” said Monica. She felt her heart beginning to pound. “I’m sorry that I was the one to open the last vase. It should have been yours to discover, instead of hunting for ghosts outside. But now, look--we’ve found the forbidden fruit!”

“I don’t know what you’re talking about,” said Monica unsteadily. “Then come here,” said Pinto, indicating a stainless steel tray, “and take a look at it.”

In size and shape, it resembled an apple--no, a pomegranate, for it had five rounded sides and a calyx on top. To judge by its weight, it was made of solid gold.
Joscelyn Godwin

Joscelyn Godwin was born in Kelmscott, Oxfordshire, England on January 16, 1945. He was educated as a chorister at Christ Church Cathedral School, Oxford, then at Radley College (Music Scholar), and Magdalene College, Cambridge (Music Scholar; B.A., 1965, Mus. B., 1966, M.A. 1969). Coming to the USA in 1966, he did graduate work in Musicology at Cornell University (Ph. D., 1969; dissertation: "The Music of Henry Cowell") and taught at Cleveland State University for two years before joining the Colgate University Music Department in 1971. He has taught at Colgate ever since.

Guido Mina di Sospiro was raised in Milan, Italy. An award-winning novelist and essayist, he has written several books, including The Forbidden Book, coauthored with Joscelyn Godwin. He maintains a blog on Reality Sandwich and for New English Review. He lives with his wife between the Washington, DC, area and central Italy.

"Blending together the Atlantis myth, prehistoric civilizations, alchemy, postmodern politics, international intrigue, and just the right amount of esoteric eroticism, they've come up with a magical cocktail that keeps readers turning the page."

– Gary Lachman, author of Dark Star Rising, and The Return of Holy Russia

“A wild tale of adventure and intrigue involving a 20,000-year-old secret entheogen sequestered in a golden pomegranate and recovered from the ocean depths off the coast of Malta. The discovery quickly spins off into a fast-paced story, weaving together ancient rites, secret cults, alchemical transformations, shamanic shenanigans, and ruthless, very bad people. It’s a real page-turner and great fun! I enjoyed it immensely.”

– Dennis McKenna, ethnopharmacologist and author of Brotherhood of the Screaming Abyss: My Life with T

“In Forbidden Fruits, Joscelyn Godwin and Guido Mina di Sospiro, authors of the acclaimed The Forbidden Book, return with more secrets and discoveries that the protectors of complacency would like to keep under wraps. Blending together the Atlantis myth, prehistoric civilizations, alchemy, postmodern politics, international intrigue, and just the right amount of esoteric eroticism, they’ve come up with a magical cocktail that keeps captivated readers turning the page. Take a bite of the forbidden fruit: expulsion from the garden was never so tasty.”

– Gary Lachman, author of Dark Star Rising and The Return of Holy Russia

“Forbidden Fruits is an occult novel that weaves together a fictional murder thriller and decades of scholarship on actual esoteric traditions and historical practices, including--yes--the ingestion of psychedelic mushrooms and their religious revelations. This is the truth in the guise of the trick; the fact in the fiction; what may have actually happened in the guise of what did not happen. Such is the nature of the secret.”

“Forbidden Fruits is a long-awaited follow-up to Godwin and Mina di Sospriro’s first coauthorship, The Forbidden Book. Now, after eight years, they have released a novel that will be a favorite among readers of esotericism as scholarship. Authentic insights into ancient and modern occult practices and suspense meet in the alchemical retort of the “Society of Harmony.” With the entheogenic key as its focus, Forbidden Fruits provides insight into ancient practices and visions and, like its predecessor, is prophetic, with the island of Malta being the focal point of a near-Lovecraftian evil that is encircling the world. Complete with psychedelic journeys, therapeutic blasphemy, and child seers, Forbidden Fruits is a journey into the unknown and one that will leave readers questioning the nature of reality--and how to know the real from the unreal--in their spiritual journey and the world around them.”

– Mark Stavish, author of Egregores: The Occult Entities That Watch Over Human Destiny