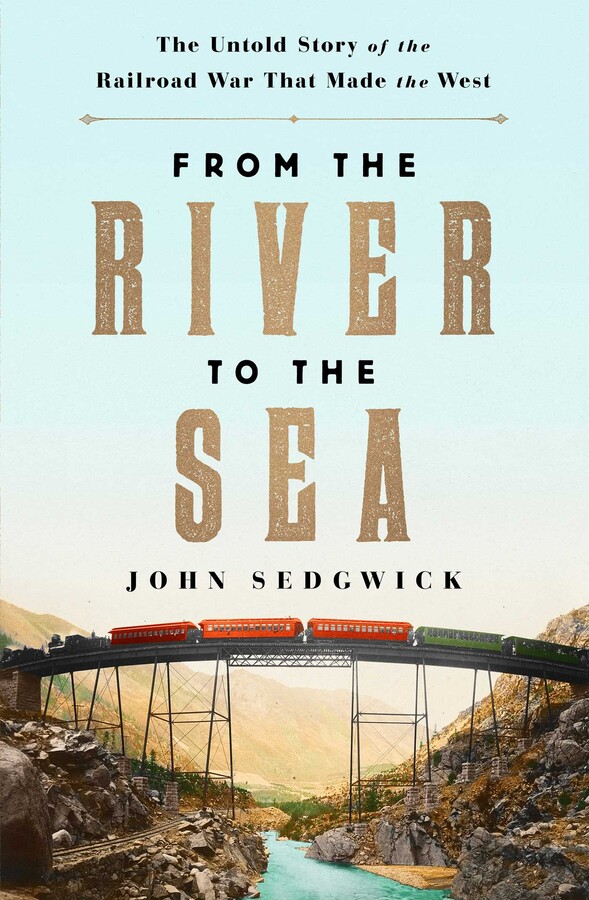 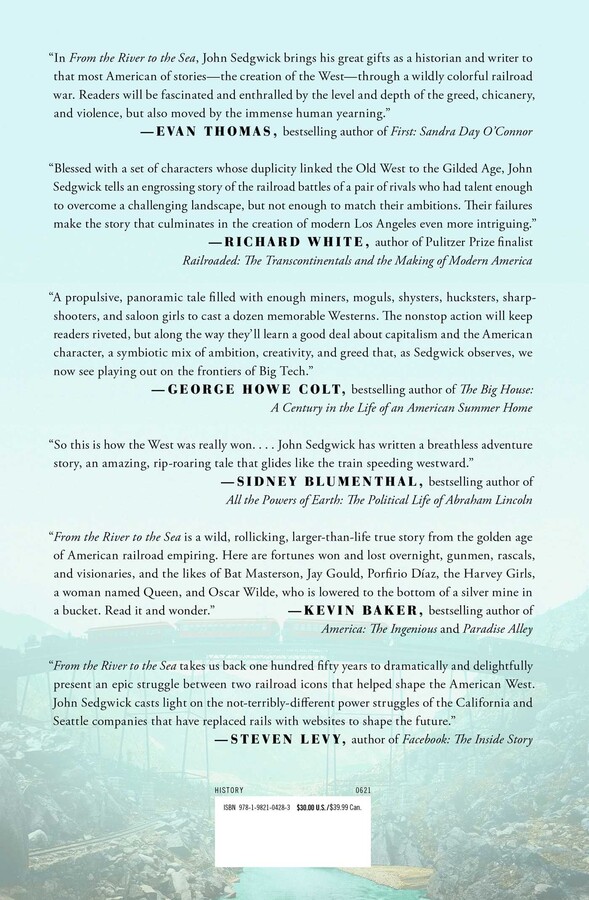 From the River to the Sea

The Untold Story of the Railroad War That Made the West

A sweeping and lively history of one of the most dramatic stories never told—of the greatest railroad war of all time, fought by the daring leaders of the Santa Fe and the Rio Grande to seize, control, and create the American West.

It is difficult to imagine now, but for all of its cloudy peaks and gorgeous coastline, the American West might have been barren tundra as far as most Americans knew well into the 19th century. While gauzy advertising promotions of the West as a paradise on earth intrigued citizens in the East and Midwest, many believed the journey too hazardous to be worthwhile—until 1869, when the first transcontinental railroad changed the face of transportation.

In From the River to the Sea, bestselling author John Sedgwick recounts, in vivid and thrilling detail, the decade-long fight between General William J. Palmer, the Civil War hero leading the “little family” of his Rio Grande, coming down from Denver, hoping to showcase the majesty of the Rockies, and William Barstow Strong, the hard-nosed manager of the corporate-minded Santa Fe, venturing west from Kansas. What begins as an accidental rivalry when the two lines cross in Colorado soon evolves into an all-out battle as each man tries to outdo the other—claiming exclusive routes through mountains, narrow passes, and the richest silver mines in the world; enlisting private armies to protect their land and lawyers to find loopholes; dispatching spies to gain information; and even using the power of the press and incurring the wrath of the God-like Robber Baron Jay Gould—to emerge victorious. By the end of the century, one man will fade into anonymity and disgrace. The other will achieve unparalleled success—and in the process, transform a sleepy backwater of thirty thousand called “Los Angeles” into a booming metropolis that will forever change the United States.

Filled with colorful characters and high drama, told at the speed of a locomotive, From the River to the Sea is an unforgettable piece of American history—and one of the last great untold tales of the Wild West.

John Sedgwick is the bestselling author of Blood Moon: An American Epic of War and Splendor in the Cherokee Nation, and twelve other books: four works of literary nonfiction, two novels, a family memoir, and five collaborations.  He has also written extensively for The Atlantic, GQ, Newsweek, Esquire, and Vanity Fair. He is married to the CNN analyst and Financial Times columnist Rana Foroohar, and lives in Brooklyn, New York.

ADVANCE PRAISE FOR FROM THE RIVER TO THE SEA:

“In From the River to the Sea, John Sedgwick brings his great gifts as an historian and writer to that most American of stories, the creation of the West, through a wildly colorful railroad war involving a host of characters from Oscar Wilde to a vixen named Baby Doe. Readers will be fascinated and enthralled by the level and depth of the greed, chicanery and violence, but also moved by the immense human yearning.” —Evan Thomas, New York Times bestselling author of First: Sandra Day O’Connor

“Blessed with a set of characters whose duplicity linked the Old West to the Gilded Age, John Sedgwick tells an engrossing story of the railroad battles of a pair of rivals who had talent enough to overcome a challenging landscape, but not enough to match their ambitions. Their failures make the story that culminates in the creation of modern Los Angeles even more intriguing.” —Richard White, author of Pulitzer Prize finalist Railroaded: The Transcontinentals and the Making of Modern America

“So this is how the west was really won—a visionary Medal of Honor winning Civil War general wages the battles of the great railroad wars, crosses the great American desert with narrow gauge tracks, defeats his ruthless rival and a posse led by Bat Masterson, creates Colorado Springs, marries the woman of his dreams (of course named Queen), and pulls his Santa Fe railroad into Southern California to create a boom and the rise of the City of Los Angeles. John Sedgwick has written a breathless adventure story, an amazing rip-roaring tale, that glides like the train speeding westward.” —Sidney Blumenthal, bestselling author of All the Powers of Earth: The Political Life of Abraham Lincoln

“John Sedgwick’s account of the no-holds-barred race to build a railroad from the Mississippi to the Pacific is a propulsive, panoramic tale filled with enough miners, moguls, shysters, hucksters, sharpshooters, and saloon girls to cast a dozen memorable Westerns. The nonstop action will keep readers riveted, but along the way they’ll learn a good deal about capitalism and the American character, a symbiotic mix of ambition, creativity, and greed that, as Sedgwick observes, we now see playing out, for better and for worse, on the frontiers of Big Tech.” —George Howe Colt, bestselling author of The Game and The Big House

“From the River to the Sea is a wild, rollicking, larger-than-life true story from the golden age of American railroad empiring. Here are fortunes won and lost overnight, moguls and gunmen, rascals and visionaries, and the likes of Bat Masterson, Jay Gould, Porfirio Diaz, the Harvey Girls, a woman named Queen, and Oscar Wilde, lowered to the bottom of a silver mine in a bucket. Read it and wonder.” —Kevin Baker, bestselling author of America: The Ingenious and Paradise Alley

“From the River to the Sea takes us back 150 years to dramatically and delightfully present an epic struggle between two railroad icons that helped shape the American West. Sedgwick casts light on the not-terribly-different power struggles of the California and Seattle companies that have replaced rails with websites to shape the future.” —Steven Levy, author of Facebook: The Inside Story

From the River to the Sea

The Untold Story of the Railroad War That Made the West