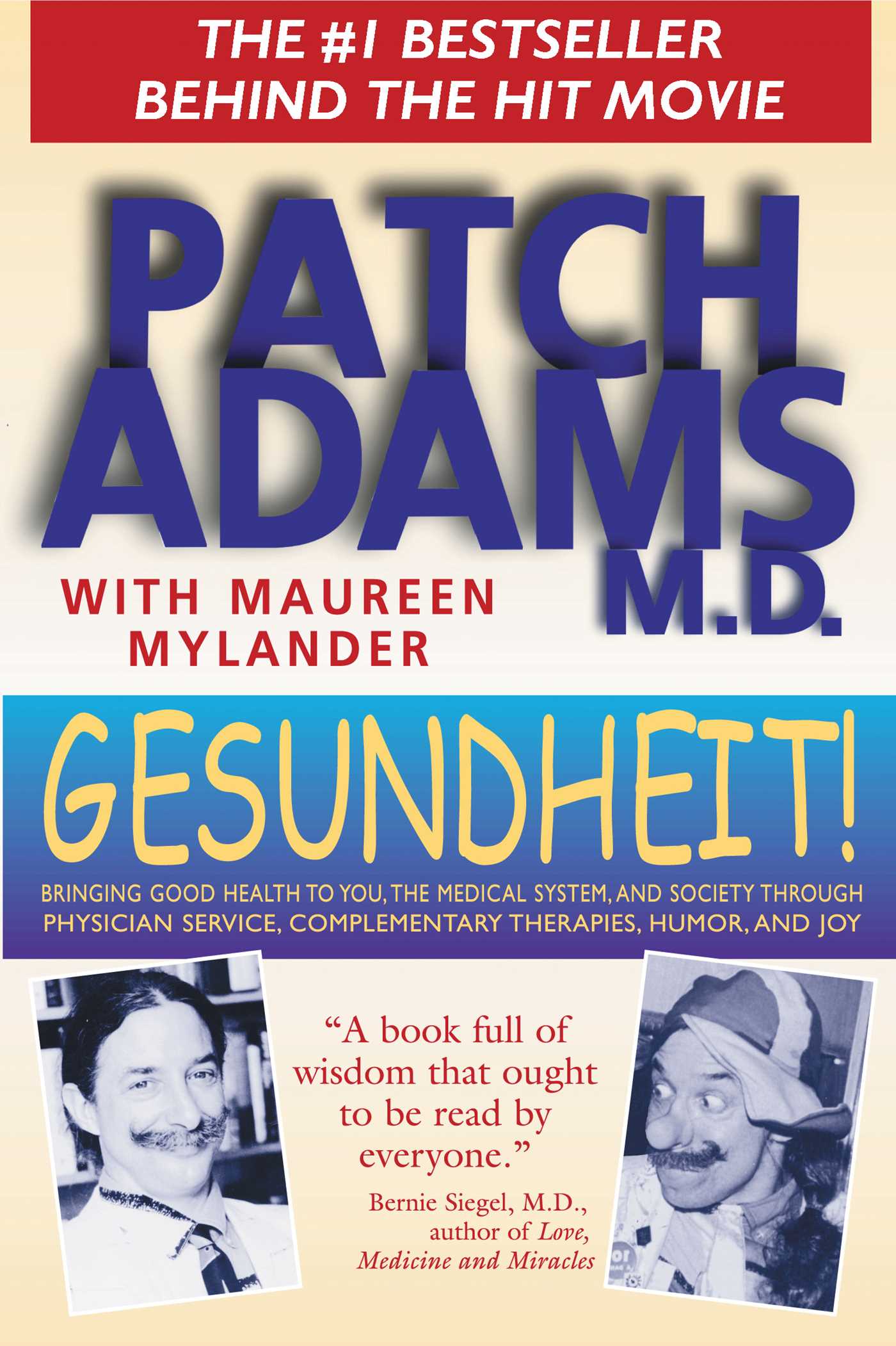 Bringing Good Health to You, the Medical System, and Society through Physician Service, Complementary Therapies, Humor, and Joy

• Released as a film from Universal Pictures, starring Robin Williams

Meet Patch Adams, M.D., a social revolutionary who has devoted his career to giving away health care. Adams is the founder of the Gesundheit Institute, a home-based medical practice that has treated more than 15,000 people for free, and that is now building a full-scale hospital that will be open to anyone in the world free of charge. Ambitious? Yes. Impossible? Not for those who know and work with Patch. Whether it means putting on a red clown nose for sick children or taking a disturbed patient outside to roll down a hill with him, Adams does whatever is necessary to help heal. In his frequent lectures at medical schools and international conferences, Adams's irrepressible energy cuts through the businesslike facade of the medical industry to address the caring relationship between doctor and patient that is at the heart of true medicine.
All author royalties are used to fund The Gesundheit Institute, a 40-bed free hospital in West Virginia.
Adams's positive vision and plan for the future is an inspiration for those concerned with the inaccessibility of affordable, quality health care.

Today's high-tech medicine has become too costly, impersonal, and grim. In his frequent lectures to colleges, churches, community groups, medical schools, and conferences, Patch shows how healing can be a loving, creative, humorous human exchange--not a business transaction.

Patch Adams, M.D., is a social revolutionary and one-man show who believes in "horse and buggy" medicine and never charges his patients a cent! In 1971, the author and a few of his colleagues founded the Gesundheit institute in Northern Virginia. During the next twelve years, they operated a home-based family medical practice and managed to treat more than 15,000 people without payment, malpractice insurance, or formal facilities. Patch Adams continues on his life mission to achieve the goal of building a fully functioning, free health care center.

The Universal movie soon to be released as "Patch Adams" starring Robin Williams was born as a book called "Gesundheit!" published by a small Vermont house and written by a doctor who dresses as a clown, doesn't charge his patients and told the architect designing his new health center in West Virginia to "make it silly," with trap doors, eyeball-shaped exam rooms and chandeliers to swing on. How did such a project find its way to print? And how did it get to Universal?

According to publisher Ehud Sperling, who started Inner Traditions 23 years ago and is just now enjoying his first Hollywood sale, "Gesundheit!" was written at the suggestion of one Josh Mailman of the philanthropic Mailman family from New York, who met Patch Adams at an ersatz-hippie celebration called the Rainbow Gathering. Mailman thought people would want to read about this 6-foot, 5-inch ponytailed man who called himself "a pie in the face of the American medical establishment"--his goal is free medical care for all--and how he came to hold his unorthodox views. Mailman introduced Adams to Sperling, who found him a coauthor, Maureen Mylander, and a book was born. That was in 1983.

The movie deal took place at least 10 years later, at a meeting of the hip entrepreneur invitation-only Social Ventures Network, where Sperling and Mailman met up by chance with "M*A*S*H" co-star Mike Farrell, who had heard of Patch Adams at the time of "Gesundheit!'s" publication. Farrell wanted to produce the project. He optioned the book via Al Zuckerman's Writer's House for what Zuckerman characterizes now as a steal, made a pitch to Universal and secured the interest of comedy director Mike Shadyac ("Liar, Liar"). "Everyone wanted Williams," reports Sperling, "because it was an ideal vehicle for him, but no one wanted to get their hopes up."

But the clown in Adams appealed to Williams. What about the height discrepancy? "Williams is shorter, but he's very funny," Sperling says. There has been talk at Universal of donating a portion of the box office to Patch Adam's Gesundheit Institute, which is more than $4 million short of the $5 million needed to finish work on the grounds and building, but according to Sperling, nothing has happened yet on that front.

"Patch Adams's book ought to be required reading for patients, doctors, and ordinary mortals of all kinds. It will help us rediscover the true meaning of medical care, and it will help to heal the health care system itself. I have learned from Patch the courage it takes to be different and to reveal your wounds: behind his clownlike persona lies a great deal of wisdom, and it often falls to the court jester to speak the truth that those in power need to hear."

"At last Patch Adams, M.D. has put on paper his vision of patient-centered health care . . . a vision that has inspired so many over the years. Patch's 'crazy dream' is, in reality, the root of what good health care should be all about and too often isn't. Any health care professional who reads Gesundheit! will come away with a renewed sense of mission and joy about what they do."

"If a wacky West Virginia doctor's dream of building a freehospital comes true, he'll have a small Vermont publishing house to thank."

"This book is an enjoyable, easy read that's ideal for those interested in a new view of health."

Bringing Good Health to You, the Medical System, and Society through Physician Service, Complementary Therapies, Humor, and Joy