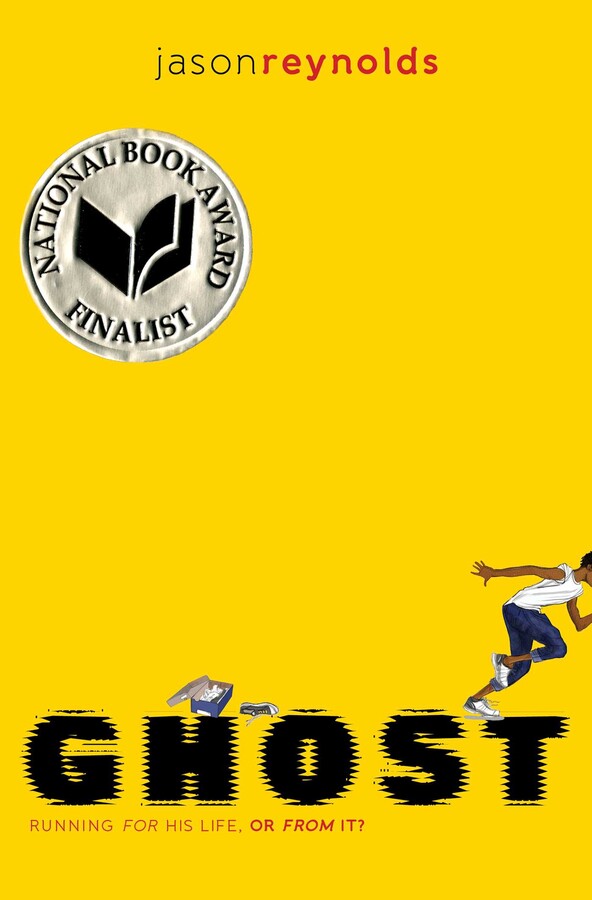 A National Book Award Finalist for Young People’s Literature.
Nominated as one of America’s best-loved novels by PBS’s The Great American Read.

Ghost wants to be the fastest sprinter on his elite middle school track team, but his past is slowing him down in this first electrifying novel of a brand-new series from Coretta Scott King/John Steptoe Award–winning author Jason Reynolds.

Ghost. Lu. Patina. Sunny. Four kids from wildly different backgrounds with personalities that are explosive when they clash. But they are also four kids chosen for an elite middle school track team—a team that could qualify them for the Junior Olympics if they can get their acts together. They all have a lot to lose, but they also have a lot to prove, not only to each other, but to themselves.

Running. That’s all Ghost (real name Castle Cranshaw) has ever known. But Ghost has been running for the wrong reasons—it all started with running away from his father, who, when Ghost was a very little boy, chased him and his mother through their apartment, then down the street, with a loaded gun, aiming to kill. Since then, Ghost has been the one causing problems—and running away from them—until he meets Coach, an ex-Olympic Medalist who sees something in Ghost: crazy natural talent. If Ghost can stay on track, literally and figuratively, he could be the best sprinter in the city. Can Ghost harness his raw talent for speed, or will his past finally catch up to him?

Castle Cranshaw (nicknamed Ghost) learned how fast he could run the night his father was arrested. Running is never something he plans to do, just like he never plans to get into altercations at school. Running just happens. Then, one day, Ghost comes across a practice in the park and decides to race one of the sprinters, a decision that leads him to join Coach Brody’s elite track team: the Defenders. Coach Brody takes a chance on Ghost and gives him a future to run toward, but only if Ghost can learn to let go of the things he’s been running from.

1. The cover of Ghost includes this question: Running for his life, or from it? Explain the role that running plays in Ghost’s life. Why does he start running? How does his reason for running change?

2. What memory is triggered about Ghost’s dad from the sunflower seeds? How does this flashback help develop Ghost’s character? What other things bring back memories of his father? Are any of his memories positive?

3. Initially, what sport is Ghost interested in playing? Why isn’t he interested in track? What do you think makes him decide to race Lu?

4. Consider the connotations of the word defender. What does it mean to be a defender? Many of the characters in the novel play the role of defenders. Choose a character and explore the ways that they embody the idea of being a defender. Why is this an appropriate name for Coach Brody’s track team?

5. How did Castle get his nickname? Why do you think he likes the name Ghost better than his given name? Which name do you think suits him best: Ghost or Castle? If you gave yourself a nickname, what would it be? Have others given you a nickname? If so, does it properly reflect who you are?

7. Ghost has to deal with bullying at school. Why do you think Brad Simmons picks on Ghost? How does Ghost respond? Instead of fighting, how could Ghost have retaliated?

8. What do you think Ghost means when he says, “I got a lot of scream inside”?

9. What do you think Ghost means when he tells Coach, “I guess the only other person I’m really scared of, maybe . . . is me”? How does Coach respond? Do you think Ghost is hard on himself?

10. Closely read the last few pages of Chapter 5 and the beginning of Chapter 6, making sure to pay attention to the author’s use of figurative language. How does Ghost’s flashback help develop his character and internal conflict?

12. In addition to training the Defenders to be competitive runners, Coach also teaches them to work together as a team, helping them learn to be responsible and empathetic. What tactics does he use to teach these life lessons?

13. Consider the way that the author contrasts Glass Manor with Sunny’s neighborhood in Chapter 7. How does this contrast help you understand Ghost?

14. Chapter 8 ends with Ghost saying, “And it felt good to feel like one of the teammates. Like I was there—really, really there—as me, but without as much scream inside.” Why are teams important? Have you ever been a part of a team? If so, how did your experience compare to Ghost’s experience?

15. What leads to Ghost’s decision to steal a pair of running shoes? Why does he feel like stealing is his only option? What are the short- and long-term consequences of his decision? What would you have done if you were in his position? What could Ghost have done instead? What lesson does he learn as a result?

16. At the newbie dinner, what secrets do Patty, Lu, Sunny, and Ghost reveal about themselves? How does this dinner impact their relationships with one another? Why is trust so important in relationships? How can you build trust with others?

17. Gradually, Coach reveals things about his own past to Ghost. What does Ghost find out about Coach’s childhood and relationship with his father? How do these revelations develop Ghost and Coach’s bond?

18. Ghost ends with a cliffhanger. What do you think the outcome of the race will be? This is the first book in the Track series: What conflicts do you think Ghost is going to face in the next book?

1. Throughout the novel, Ghost has a number of adults who act as advocates for him: Mr. Charles, Coach, his mom, and even Principal Marshall. Consider the importance of each of these figures in Ghost’s life. Then write an essay or prepare a speech about a trusted adult in your own life. Why do you trust this person?

2. Jason Reynolds uses world records as a framing motif in the novel. Research world records and create a poster about some of the most interesting world records that you find. If you were going to try to break a world record, which one would you attempt?

3. One of Ghost’s heroes is Jamaican runner and Olympic gold medalist, Usain Bolt. Research Bolt’s biography or the biography of another great runner and present your findings to the class either with a traditional report or a multimedia presentation. A list of famous runners in history can be found here: http://www.biography.com/people/groups/track-and-field-athletes. And a contemporary list of runners can be found here: http://rw.runnersworld.com/the50/.

4. When Coach asks Ghost’s mother to let him join the team, Ghost reflects, “I felt like I had seen this in every single sports movie I had ever watched. All of them. Ma’am, your son has potential. If this went like the movies, I was either going to score the game-winning touchdown (which is impossible in track) or . . . die.” As a class, compare Ghost to a classic sports movie (ex. Rudy, Bend It Like Beckham, Miracle, Hoop Dreams, 42, The Bad News Bears, Jim Thorpe—All American). Are there any similarities between the film you watch and Ghost?

5. Work with your physical education department to organize a Ghost-inspired class, trying out some of the training exercises and races. How did this experience enrich your understanding of Reynolds’s novel?

6. One of the central conflicts in the novel involves Ghost’s desire to acquire an expensive pair of running shoes. Research the development of running shoe technology. What types of shoes are on the market? What features are important in a running shoe? Which brands have the highest ratings? If you had to choose one pair of running shoes, which one would you choose? Write a persuasive essay that uses rhetorical appeals to justify your choice.

7. Look back at Chapter Five, paying specific attention to the scene in Everything Sports. Re-write this scene from Tia’s point of view. What do you think happened when she realized that Ghost stole the shoes? How would she have felt when Ghost returned with Coach and apologized?

8. Coach tells Ghost that he wants to show him, “You can’t run away from who you are, but what you can do is run toward who you want to be.” How does Castle try to run from who he is? What kind of person does he want to be? How has finding his team helped him start to become that person? Try applying Coach’s advice to your own life: What kind of person do you want to be? What could help you become that person?

9. Working with a group, try to translate Ghost into film. Which aspects of the book would translate especially well to film (ex. dialogue, setting, character, conflict)? You may choose to create a book trailer for the novel or adapt a scene in the book into a screenplay and film it. 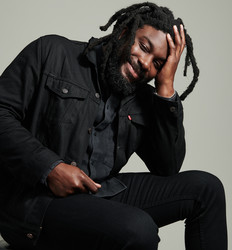 Jason Reynolds is a #1 New York Times bestselling author, a Newbery Award Honoree, a Printz Award Honoree, a two-time National Book Award finalist, a Kirkus Award winner, a two-time Walter Dean Myers Award winner, an NAACP Image Award Winner, and the recipient of multiple Coretta Scott King honors. Reynolds is also the 2020–2021 National Ambassador for Young People’s Literature. His many books include When I Was the Greatest, The Boy in the Black Suit, All American Boys (cowritten with Brendan Kiely), As Brave as You, For Every One, the Track series (Ghost, Patina, Sunny, and Lu), Look Both Ways, and Long Way Down, which received a Newbery Honor, a Printz Honor, and a Coretta Scott King Honor. He lives in Washington, DC. You can find his ramblings at JasonWritesBooks.com.

More books in this series: Track