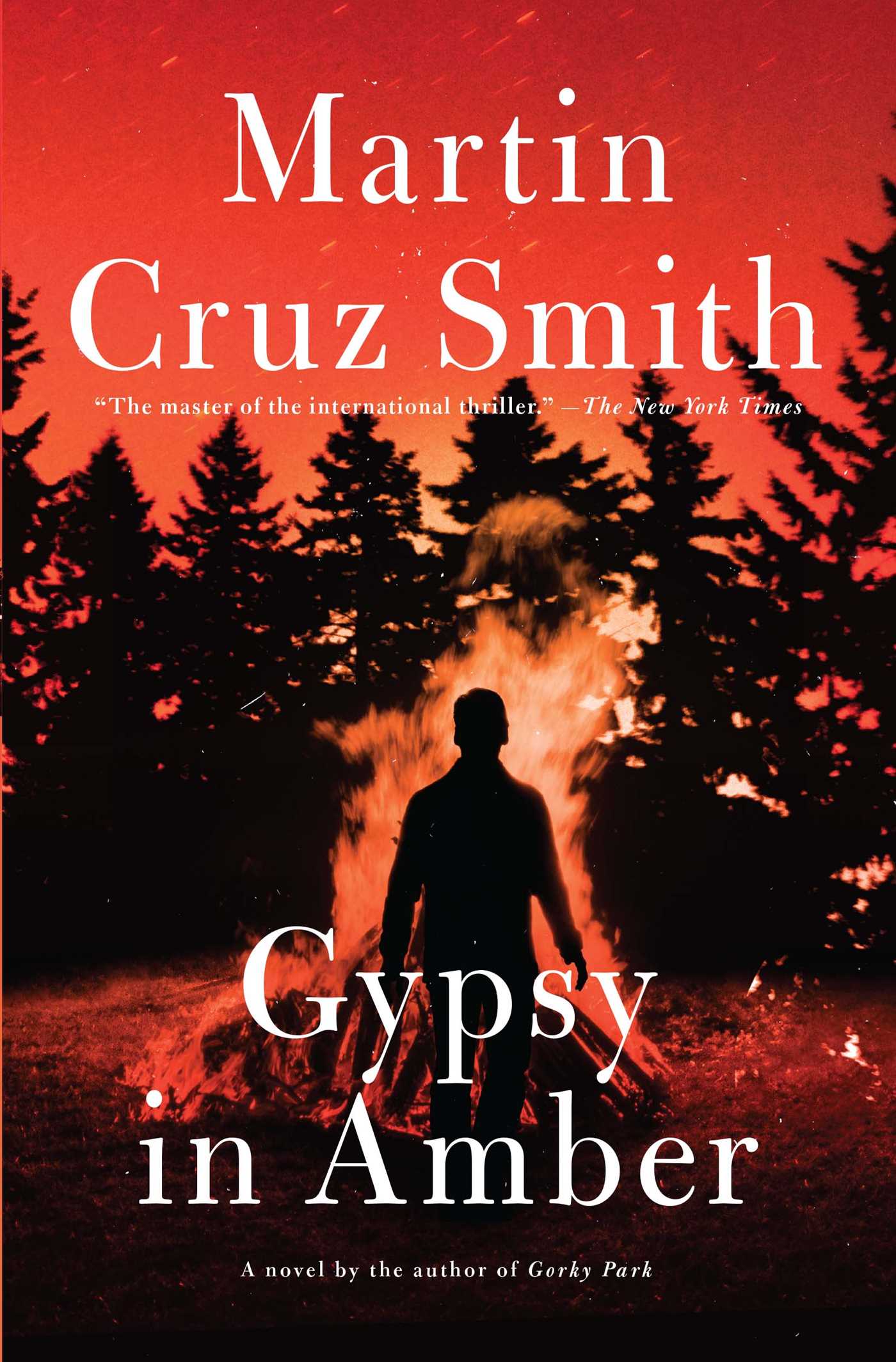 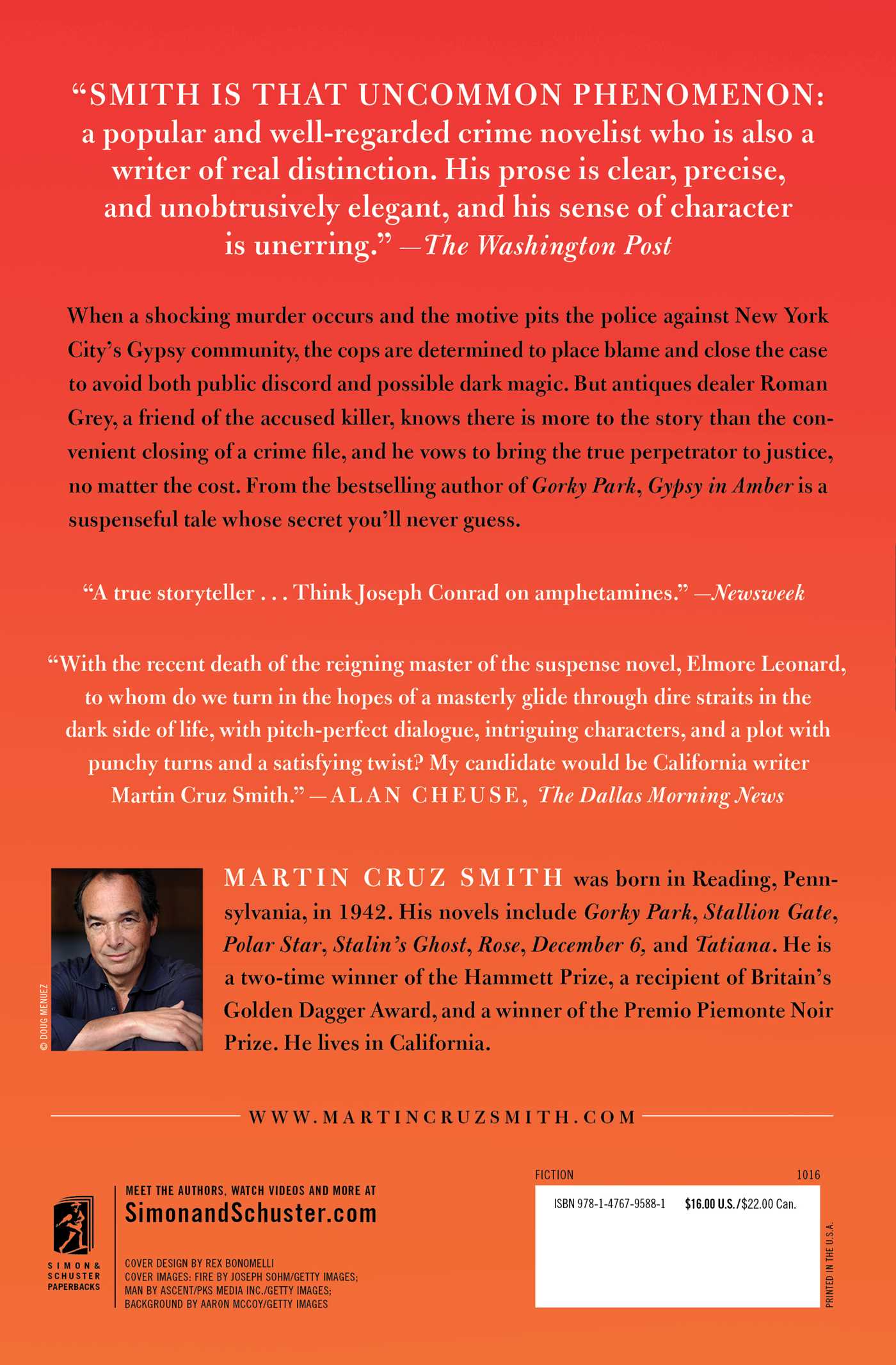 From “the master of the international thriller” (The New York Times) and the bestselling author of Tatiana and Gorky Park, Martin Cruz Smith’s first mystery novel—a classic crime whodunit with a shocking twist.

One girl was found horribly mutilated, the victim of a rite that no sane person believed could take place in the modern world. One girl lay trembling in her apartment, as the strange intruders forced open her bedroom door, and the waking nightmare began. And one girl discovered that her body and her soul were no longer her own....

A murder threatens to force the police into a confrontation with New York’s gypsy community. The cops are determined to pin the blame on a gypsy. But antique dealer Roman Grey knows there is more to the case than the convenient closing of a crime file, and he vows to bring the truly guilty to justice. You’ll never guess the secret of Gypsy in Amber.

God had made Man in His image, Roman had heard. He wondered which god would claim the body on the aluminum table.

“Caucasian female, age approximately twenty to twenty-five. Hair brown, eyes blue.” The medical examiner spoke into a microphone clipped onto the lapel of his white smock. A wire from it led to the tape recorder in a roomy pocket.

“The body has been dismembered into six separate parts,” he went on in a monotone. “Otherwise it appears to be that of a healthy female. All the teeth are present, although there are silver fillings on each of the upper right molars. There is a small, old diagonal scar under the chin. No digits are missing. There is some bruising of tissue on the knuckle of the fourth metacarpal, where a ring has been removed while alive or shortly afterward. There are no other scars, birthmarks or moles.”

There were four men around the table. Roman wasn’t a weak man; he’d seen death before. But the others, including Isadore, had professional objectivity to fall back on. He didn’t, and the disassembled horror of the sterile room was a revelation to him. He’d never considered that put back together, the human body resembled a misshapen octopus more than anything else.

The examiner had pulled back a flap of scalp and sawed through the skull for the brain. One cuff raised an eyelid to reveal a blue eye that stared at Roman with a madly askew iris.

The brain, a convoluted ruby, was weighed and deposited in a glass jar. The examiner’s assistant wrote out a label, licked the back and applied it to the jar.

Sergeant Harry Isadore looked out of place, a long-­suffering snowman. His cheeks and nose were contrasting hues of blue and pink, and he slapped his thick hands ­together to encourage circulation. He had dressed for a warm summer day, and going into the mortuary on First Avenue had loosened his sinuses.

“You’ve got to admit it’s easier this way,” the assistant said as he pushed the legs and arms to one side.

The examiner opened the chest cavity and removed the heart and lungs and studied the interior of the cavity for fractured ribs. As a team, he and the assistant cut out the intestinal tract, the liver, spleen, pancreas and kidneys. When they had finished examining them, they placed the organs in glass-top fruit jars and sealed the tops with wax. The assistant wrote out more labels while the examiner drew blood for a typing, two men cataloguing a treasure.

The police reported the girl had come from the Cadillac Eldorado driven by Nanoosh Pulneshti. Nanoosh had started from Montevideo, Uruguay, gathering pieces for Roman. In Cuzco he bought Incan statuettes, in Manaus a crate of gold Empire service brought up the Amazon by a nineteenth-century rubber baron; in Maracaibo he stole silver candlesticks from an abandoned Jesuit fortress. He crossed the Rio Grande without passing through U.S. Customs, and three days later Nanoosh was on the Palisades Parkway approaching the George Washington Bridge. One of those everyday accidents occurred between the Eldorado and a U-Haul bringing antiques down from Newton, Massachusetts, to the Armory Show. Both Nanoosh and the U-Haul driver had died as the car jackknifed over the van. It would have been a simple case for the highway patrol except for the neat, scarcely bruised pieces of the girl they found strewn over the roadside.

“No spermatozoa,” the assistant said after looking at a smear under the microscope.

“Can you give me a closer age, Doctor?” Isadore asked.

The examiner prodded the jaw open again while the ­assistant held the head steady.

“From the wear on the teeth”—he cut a thin line into the gum—“and the immaturity of the roots of the third molar, ­I would venture closer to twenty years than twenty-five.” He pushed the jaw closed and shrugged. “She’s not a virgin, but she’s never borne a child or had an abortion. No evidence of drugs. Hardly any cavities. She must have been a clean liver.”

Isadore had brought Roman down to identify Nanoosh in his stainless-steel filing cabinet. Roman didn’t know what the point was in asking him to witness this gruesome theater. He refused to watch, looking instead at the curved tile floor with its black, grooved borders.

“Rigor mortis has set into the entire body. Since the face is still rigid, the victim may have been dead for from eighteen to twenty-four hours. However, there also seems to be little lividity, and the in situ report states that specimens of dry ice were found at the scene of the accident and it’s possible the ice was used to preserve the body. So the time range can be stretched to about ten to thirty hours to account for the possible effect of a lower temperature on the muscles.”

Roman cried for Nanoosh, for the arrogance and daring reduced to a filing drawer. But this was another kind of reduction beyond grief, the butcher’s secret.

“There are nine great wounds of dismemberment. Since there is a lack of bruises or lacerations to indicate a struggle, it is likely that separation of the head was first. The wound entry is from the back of the neck at the second cervical vertebra. The sinews and muscles are cleanly cut, and strands of the victim’s hair are embedded in the flesh. Separation of the spinal cord, not to mention the jugular, indicates death was instantaneous. The weapon used was sharp, clean and heavy and used with great force. There is no indication of a second blow. The wound entries for dismemberment of the arms are at the armpits. The arms would appear to have been drawn back, and again there is no indication that more than one blow was used. In each case, the greater tubercles have been crushed. Likewise, the olecranons in the separation of the biceps from the forearms.

“The patella was shattered in each leg in the separation of the thighs from the calves. Separating the thigh from the pelvis was not such an easy matter. The thigh appears to have been spread back, and the wound entry is in the front at the origin of the rectus femoris; but the neck of the fovea capitus seems to have resisted, particularly in the right leg, and several blows were necessary to disengage the femurs from the pelvis.

At the end of all this the examiner paused and glanced at Isadore. His assistant was at the ready, rolling forward a tray with its container of formalin, alcohol and carmine to embalm the parts. Isadore stopped the tray. He took a toothpick and ran its flat end under the girl’s polished fingernails. He held the toothpick up to the light and inspected it.

“Nothing. She didn’t suspect a thing. She thought she was with a friend.”

“Is that all, Sergeant? We’d like to clean up.”

“Hold it.” He gestured for Roman. “One last thing.”

Roman stood next to Isadore above the cool table with its display of meat.

“Is she Gypsy?” Isadore asked.

There was no way of avoiding it now. Roman looked, concentrating on minute points, refusing the whole. Finally, he looked at the fingernails Isadore had just held.

“No. There’d be a brown moon around the cuticle at the very least.”

“Then how do you explain it?” Isadore asked.

“How she could think your friend Nanoosh was her friend?”

Roman didn’t know what to say. Isadore was Roman’s friend, too.

Martin Cruz Smith’s novels include Gorky Park, Stallion Gate, Nightwing, Polar Star, Stalin’s Ghost, Rose, December 6, Tatiana, The Girl from Venice, and The Siberian Dilemma. He is a two-time winner of the Hammett Prize, a recipient of the Mystery Writers of America’s Grand Master Award and Britain’s Golden Dagger Award, and a winner of the Premio Piemonte Giallo Internazionale. He lives in California.

SEE ALL
See more by Martin Cruz Smith
Thank you for signing up, fellow book lover!