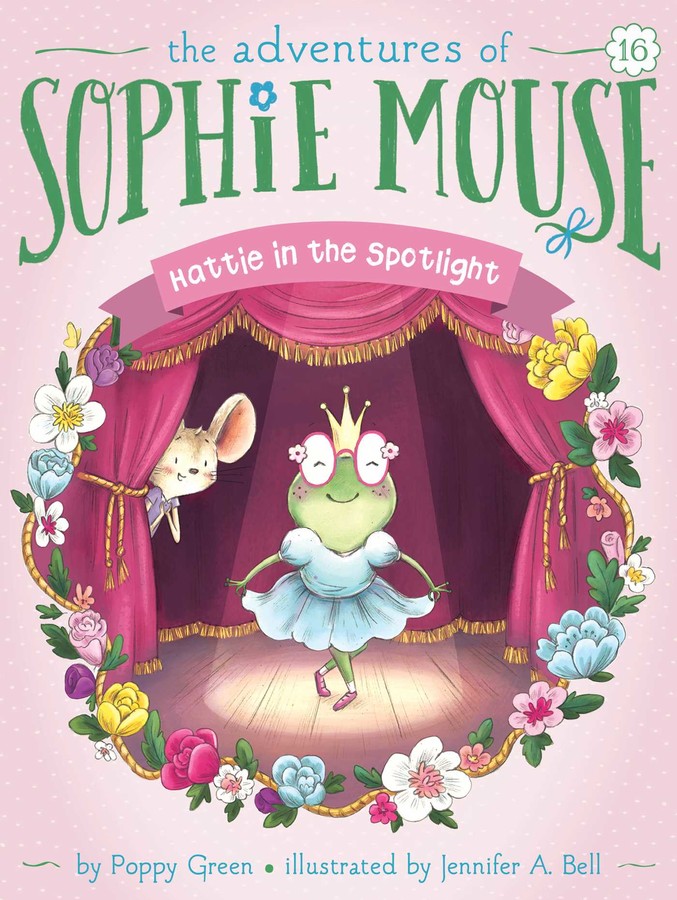 Hattie in the Spotlight

Sophie’s friend Hattie tries out for a play at Oak Hollow Theater in this sixteenth charming book of The Adventures of Sophie Mouse series!

When Hattie Frog learns that Oak Hollow Theater is putting on a play and anyone can audition, she knows it’s her time to shine. Sophie is surprised because Hattie is usually so shy! But she supports her friend and helps Hattie practice for her audition. And Hattie gets a role! There’s just one problem. Now Hattie isn’t so sure she’s ready to be on stage in front of all of Pine Needle Grove!

With easy-to-read language and illustrations on almost every page, the Adventures of Sophie Mouse chapter books are perfect for beginning readers.

The springtime sun was warm on her face. Her friends Hattie and Owen swam nearby, talking and laughing. The water lapped gently at the sides of the raft. All was peaceful on Forget-Me-Not Lake until—

Splash! Owen and Hattie splashed her from the water.

“Ah!” Sophie sat up and opened her eyes. She used her oar to splash Owen and Hattie back. “Water fight!”

“No fair!” Sophie called out. “Two against one!”

“Where did she go?” Owen said.

He and Sophie scanned the water’s surface.

Sophie heard a rustle in the reeds behind her. She whirled around, expecting to find Hattie. “Ah-ha!”

Instead, Sophie was staring down at two young ducks.

“Wah!” one of them quacked in surprise.

“Sorry!” the other duck said. “We weren’t trying to spy on you. It just… looked like fun.”

“Sure!” the first duck said eagerly. Her eyes focused on something over Sophie’s shoulder. “But are you sure your friend doesn’t mind?”

“Huh?” said Sophie. She turned around.

Behind some rocks, Sophie could make out a green nose and one eye. It peeked out at them through flower-rimmed eyeglasses.

“So that’s where Hattie went!” Sophie cried. She leaned close to the ducks and whispered, “She’s a little shy. But only at first.” Then Sophie had an idea.

Sophie organized them in a game of leapfrog—Hattie’s favorite. The more they played, the farther Hattie came out into the open.

“Hattie!” Sophie called out. “We could use one more to make our leapfrog line longer!”

Hattie hesitated for a moment. Then she smiled and leaped over to join in. Before long, Hattie was laughing loudest of all.

“They were nice,” Hattie said later about the ducks.

She and Sophie and Owen were on the path back to Pine Needle Grove. Close to town, they came around a bend. Sophie could make out the brand-new roof of Oak Hollow Theater up ahead in the distance.

“Have either of you been inside the theater?” Owen asked.

“Not since they reopened,” Sophie said.

Ever since they could remember, Oak Hollow Theater had been a rustic outdoor theater: log benches arranged on a slope in front of a simple stage.

But recently it had been redone. The Pine Needle Grove Arts Council had hired a great architect for the project—Sophie’s dad, George Mouse! A huge group of volunteers had raised the new roof and decorated the inside.

Sophie had seen the plans on her dad’s drafting table. But not the real thing. “Should we take a peek?” Sophie asked. Owen and Hattie nodded.

As they pushed open the front doors, Sophie could not believe her eyes.

Poppy Green can talk to animals! Unfortunately, they never talk back to her. So she started writing in order to imagine what they might say and do when humans aren’t watching. Poppy lives on the edge of the woods in Connecticut, where her backyard is often a playground for all kinds of wildlife: birds, rabbits, squirrels, voles, skunks, deer, and the occasional wild turkey.

Jennifer A. Bell is an illustrator whose work can be found on greeting cards, in magazines, and in over a dozen children’s books. She lives with her husband, son, and cranky cat in Minneapolis, Minnesota.

Hattie in the Spotlight

More books from this illustrator: Jennifer A. Bell

SEE ALL
See more by Jennifer A. Bell

More books in this series: The Adventures of Sophie Mouse