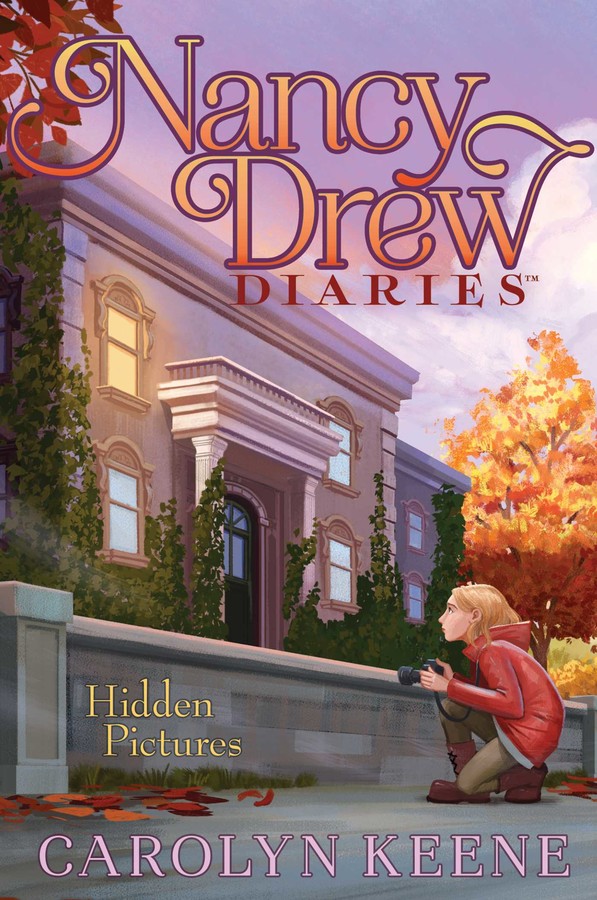 Nancy, Bess, and George must find the truth behind a photographic mystery in this nineteenth book of the Nancy Drew Diaries, a fresh approach to the classic mystery series.

Nancy and her friends are spending the weekend in a small mountainside town called Shady Oaks. The local museum is displaying a never-before-seen collection from famous nature photographer, Christopher DeSantos. So the usually sleepy town is now filled with tourists. But it’s not just the dramatic lighting of the old black and white photographs that people have come to see.

Newspapers all over the country have picked up the story of two visitors who went missing in Shady Oaks only to turn up in the old DeSantos photographs, seemingly frozen in time. What’s more, there was a rumor that DeSantos was cursed by his former partner after a disagreement. Now everyone is wondering if the legend is real.

Nancy, Bess, and George are convinced that there is another explanation to be found. But it quickly becomes clear that someone is making sure they don’t find it. Can these three teenage sleuths solve this mystery before it’s too late?

George and I made our way over to where Bess was standing. She was looking in the front window of an arts and crafts store, where there was a printout of a large black-and-white photograph. The photo was of a serious-looking man with heavy wrinkles, dark hair, and wide, light gray eyes. Or at least they looked gray, since the photograph had no color.

We were in the town of Shady Oaks, a drive of several hours from River Heights. It was fall and there were trees everywhere, shading the town with red, orange, and yellow leaves that were covering everything like one large umbrella. Lining the main street were lampposts, and each of them was draped with a banner for the Carlisle Museum and the new exhibit featuring pictures of Shady Oaks by the world-famous photographer Christopher DeSantos. DeSantos had grown up in town and spent his teenage years taking pictures. None of these photographs had ever been seen before. They had all been donated only recently by DeSantos’s granddaughter, who had lived here with her grandfather after his retirement. She had moved to Shady Oaks when she was only a child, over twenty years ago, but she had apparently never left.

“It’s probably just the photograph,” said Bess. “If the lighting were different and if he was smiling, he wouldn’t look so…”

Bess and George were my best friends, but they couldn’t be more different. That much was clear just by looking at them. It was raining lightly in Shady Oaks and Bess had brought along a pair of polka-dotted rain boots, pulled up carefully over her jeans, and a matching polka-dotted umbrella. Her blond hair was tucked behind her ears and protected entirely from the rain. George, on the other hand, had thrown on an oversize green parka. She had pulled the hood down low over her forehead, but tufts of her dark hair still peeked out from underneath it and were slowly soaking up rainwater.

Personally, I had opted for something more in the middle. I was wearing my red raincoat, zipped up to protect me from the wind, a warm cable-knit sweater, and a pair of boots.

“So where to now?” said Bess, turning away from the window. “Should we find the museum?”

“No way,” said George. “No museums until after breakfast.”

“I agree,” I said. “We should definitely get some food first.”

Truthfully, I was eager to find the Carlisle Museum and visit the new Christopher DeSantos exhibit. But we had driven to Shady Oaks and checked into our hotel pretty late last night. No restaurants had been open, and I would have felt bad making my friends wait to eat this morning. Especially since I knew neither of them were very interested in Christopher DeSantos, or even photography in general.

We continued walking down the main street. Bess was trying to avoid puddles as she went. I was on the lookout for other potential museumgoers. Shady Oaks seemed pretty busy. Despite the rain and the small size of the town, there were actually a good number of people walking around. Many of the stores had window displays advertising the DeSantos exhibit, and most of the pedestrians were stopping to look at each one. I had to assume we were surrounded by tourists and DeSantos fans.

George had fallen a few steps behind us. She had taken out her cell phone and was holding it up in the air as she looked for service. I could see the droplets of water already collecting on her phone screen.

“No cell service!” she called to us. She sounded a bit miserable. “And no Wi-Fi at the hotel. Why did we come to such a remote town again?”

Next to me, Bess rolled her eyes. “George,” she called back. “Nancy is a big fan of Christopher DeSantos! As her friends, we should be happy to tag along so she gets to experience this. Right, Nancy?”

I knew I wasn’t being very convincing. Especially when Bess turned toward me and looked a little confused. “Nancy,” she said. “You are a DeSantos fan, aren’t you?”

“Well,” I said. The truth was, I hadn’t even heard of Christopher DeSantos or his photographs until a couple of days ago. There was another reason I wanted to visit Shady Oaks. But before I could explain what we were really doing there, I saw someone walking toward us.

“Hello!” the person called out. She was wearing a bright yellow raincoat, and her intensely red hair was pulled back into a ponytail that flicked behind her as she walked. Around her neck she carried what looked like an old-fashioned film camera, but it was encased in a clear plastic covering, to protect it from the rain. “Are you guys here for the exhibit? Are you huge Christopher DeSantos fans too?”

“That’s what we were just wondering,” said Bess.

The girl looked confused, so I quickly held my hand out to her. “Yes,” I said. “We’re all big fans. I’m Nancy, this is Bess, and that’s George, with the cell phone.”

At the sound of her name, George looked over at us and the new girl. She waved as she walked over to join us.

“I’m Riley,” said the girl. She smiled, and I could see that she had slightly buck teeth and that her nose was dotted with freckles. “I’ve been waiting for this exhibit to open for months. Are you guys staying in town?”

“Yes,” said Bess, smiling back at her. “At the Elder Root Inn.” Leave it to Bess to be unfailingly polite, even when I knew she was dying to ask me what was really going on.

“Nancy’s the fan,” said George, who had come up to stand on my right side. “Not me or Bess.”

Riley looked between us, clearly confused again, since I had just told her we were all fans of DeSantos’s work. Before I could get our story straight, George continued on.

“I just don’t understand why anyone would continue to use a film camera when digital exists,” she said. She looked pointedly at what was hanging from Riley’s neck.

“You’d be surprised how different they are,” she said. “I’d be happy to show you. But of course, DeSantos shot using only film, and his work speaks for itself. Right, Nancy?”

“Of course,” I said, a little sheepishly.

“I think his series on Copper Canyon would have been impossible to capture with digital,” said Riley. “And those are probably some of my favorite pieces. What about you? What’s your favorite DeSantos photograph?”

“Um—uh—well—” I stammered. Riley, Bess, and George were all looking at me, but really, I couldn’t have named a single DeSantos photograph if I wanted to.

Just at that moment, a single, piercing scream turned our attention down the street. As I looked in the direction from which it had come, I saw what seemed to be some kind of commotion in front of a large brick building. A sign on it clearly read THE CARLISLE MUSEUM—the same museum that was hosting the photographs of Christopher DeSantos.