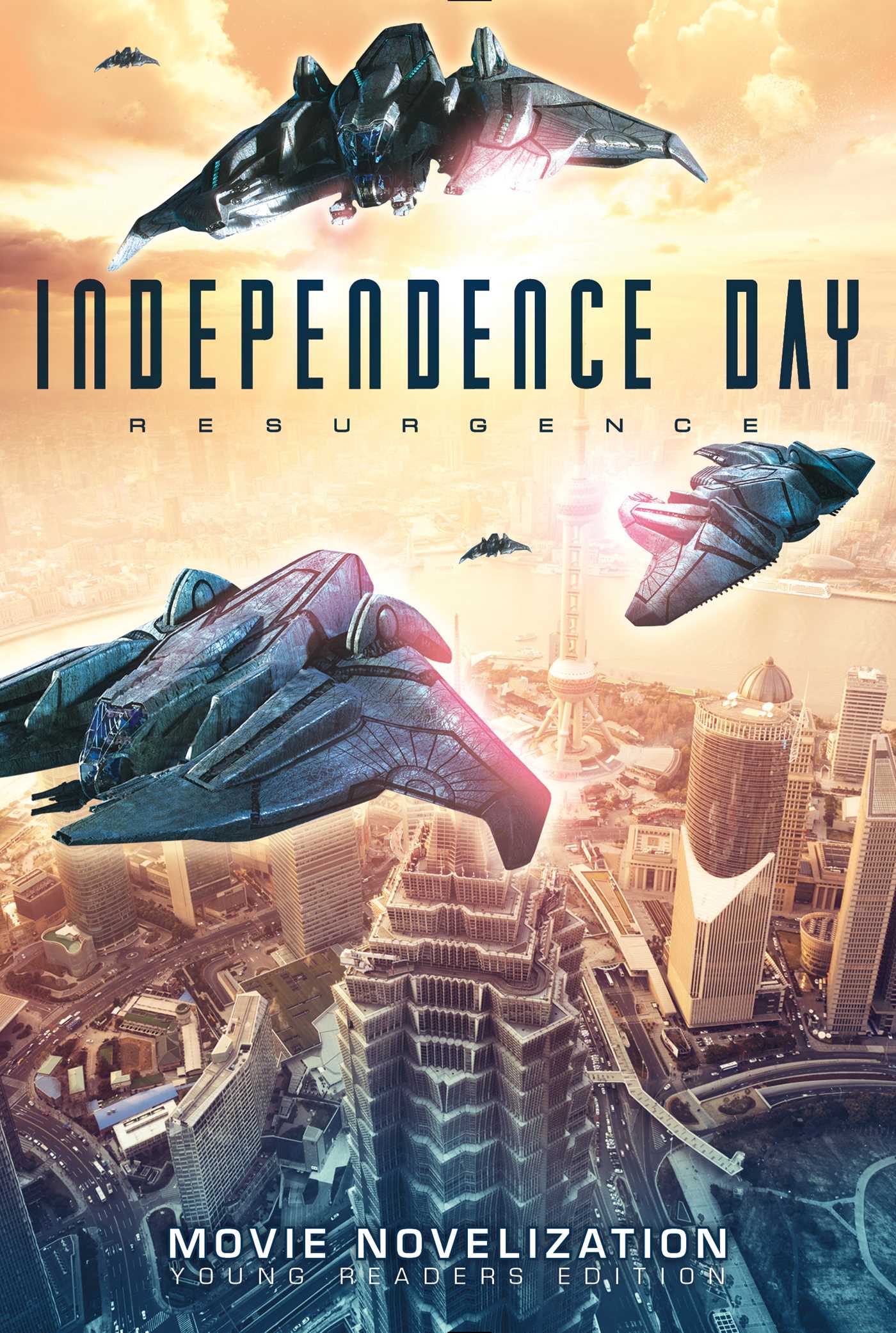 Prepare for another alien invasion with this action-packed retelling of Independence Day: Resurgence that features an eight-page full-color insert with images from the film!

We always knew they were coming back…

Humans are fighters. Twenty years ago, we fought off an alien invasion, and against all odds, we won. We recovered alien technology. We built a global defense system. We trained more fighters. But now the aliens are back…and this time, they’re stronger than they were before. Humankind will fight. But will humankind win? Find out in this epic retelling of Independence Day: Resurgence.

Twenty years later people on Earth were getting ready to celebrate the anniversary of the planet’s Independence Day. At the White House—rebuilt to its former glory after the invasion had destroyed it—crews were busy preparing for the big celebration in two days.

Inside the White House, President Lanford practiced her Fourth of July speech with her team in the conference room.

“The countless lives we lost in the War of ’96 didn’t perish in vain. They inspired us to rise from the ashes as one people of one world. For twenty years we haven’t seen any armed conflict between nations, because we put our petty differences aside. United, we rebuilt our families, our cities, and our lives. The fusion of alien and human technology not only enables us to defy gravity, it has also paved the way to create the Earth Space Defense, or ESD program, which finally makes our planet safe again.”

Finished, she looked to her speechwriter and smiled. “Great speech, Patty.”

“Thank you, Madame President,” answered Patricia Whitmore. Former President Whitmore’s daughter was only seven when the alien invasion began. She had been with her father at the time, and she knew that had probably saved her life. Her mother hadn’t been so lucky. Injured in the alien attack, she had died on July 4, 1996.

Patricia would never forget that day twenty years ago. She had grown up as Washington, DC, was rebuilt. It was the only home she had ever known, and she’d moved back there after her training at the ESD Academy, choosing the White House over being a pilot in space.

Secretary of Defense Reese Tanner spoke up. “I have to disagree,” he said. “This is an election year, and I strongly advise that you remind the people that you lost your entire family in ’96.”

The president stopped him. “Tanner, three billion people died. Everybody lost someone. We’ve been living in fear for the last twenty years. That ends today.”

At that moment Captain Dylan Hiller, dashing in an ESD dress uniform, stepped into the conference room. He and Patricia exchanged a smile. Twenty years before, his father, Steven Hiller, had fought the aliens side by side with former President Whitmore. Dylan and Patricia had bonded during that time, and they’d remained friends throughout their childhood and then through their time at the ESD Academy.

“I can’t tell you how proud we are to have you flying our flag up there,” President Lanford continued.

President Lanford introduced Dylan to Reese Tanner. “I think you know the secretary of defense.”

“And I don’t have to introduce you two,” the president said when they reached Patricia.

“Moving up in the world,” Dylan said as he and Patricia hugged.

“You’re the one who’s back in the White House,” Dylan pointed out.

“As an employee, I don’t quite get the same benefits as I did when I lived here,” Patricia countered.

Dylan smiled. “How did they let us get away with everything we did?”

“Maybe it had something to do with the fact that my dad was commander in chief,” Patricia replied.

An aide approached Dylan. “We’re ready for you, Captain.”

“Dylan, be nice to Jake when you see him up there,” Patricia said before he walked away.

For the first time since he’d arrived, Dylan’s face clouded. He walked beside the president and forced a smile as the camera flash popped.

The aide handed a phone to Patricia, and she stared at it for a moment, wearing a worried frown. Agent Travis worked for her father. When he said something was urgent, he meant it.

What was her father up to this time?