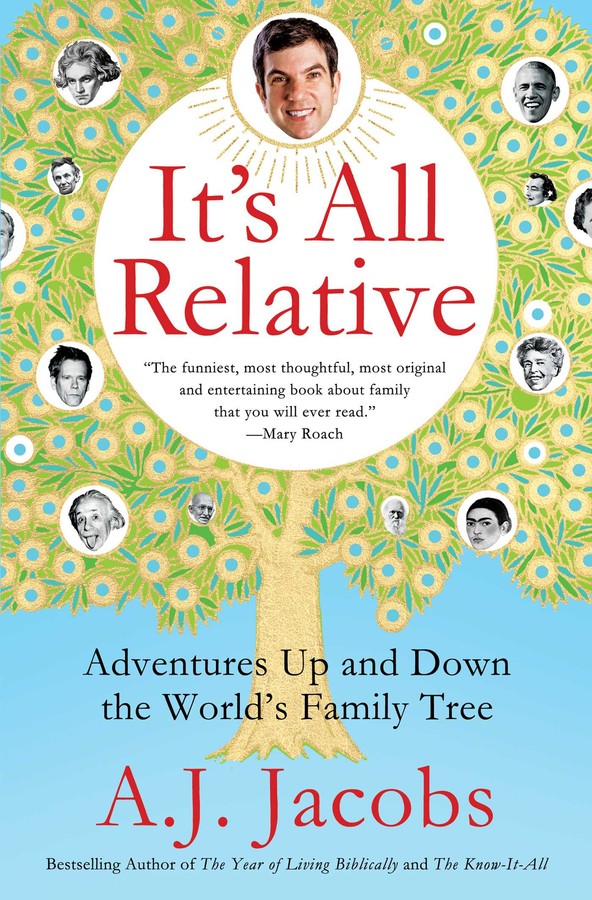 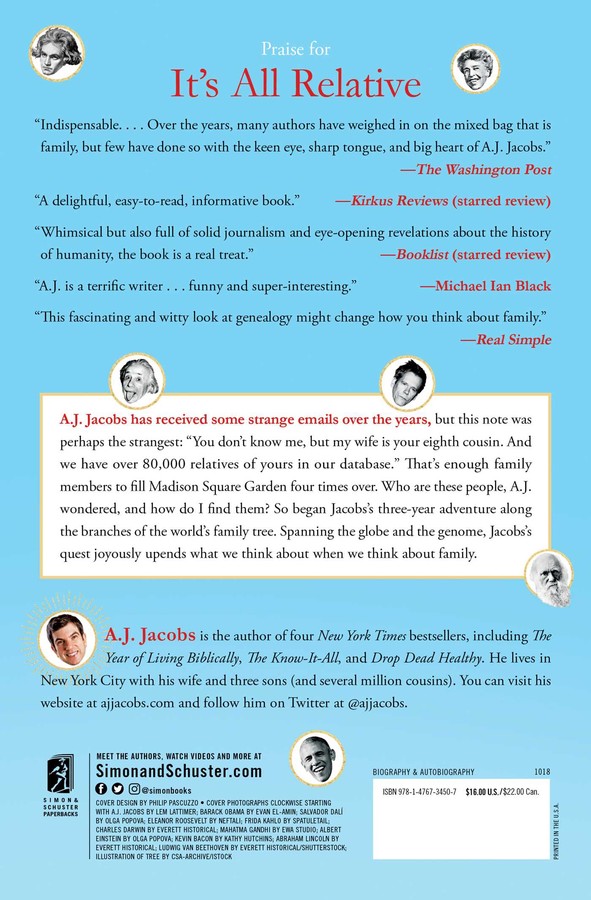 Adventures Up and Down the World's Family Tree

A.J. Jacobs has received some strange emails over the years, but this note was perhaps the strangest: “You don’t know me, but I’m your eighth cousin. And we have over 80,000 relatives of yours in our database.”

That’s enough family members to fill Madison Square Garden four times over. Who are these people, A.J. wondered, and how do I find them? So began Jacobs’s three-year adventure to help build the biggest family tree in history. In It’s All Relative, he “muses on the nature of family and the interconnectedness of humanity in this entertaining introduction to the world of genealogy” (Publishers Weekly).

Jacobs’s journey would take him to all seven continents. He drank beer with a US president, sung with the Mormon Tabernacle Choir, and unearthed genetic links to Hollywood actresses and real-life scoundrels. After all, we can choose our friends, but not our family.

“Whether he’s posing as a celebrity, outsourcing his chores, or adhering strictly to the Bible, we love reading about the wacky lifestyle experiments of author A.J. Jacobs” (Entertainment Weekly). Now Jacobs upends, in ways both meaningful and hilarious, our understanding of genetics and genealogy, tradition and tribalism, identity and connection. “Whimsical but also full of solid journalism and eye-opening revelations about the history of humanity, It’s All Relative is a real treat” (Booklist, starred review).

It’s All Relative CHAPTER 1 The Eighth Cousin
My story begins three years ago with one of the strangest emails I’ve ever received.

Naturally I figure the next line will involve instructions on how to wire ten thousand dollars to a bank account in Togo, or inform me of the miraculous potency benefits of goji berries.

But instead, the emailer says his name is Jules Feldman. He explains that he’s a dairy farmer on a kibbutz in Israel and has read some articles I’ve written. He wants to tell me about his life’s project. For the previous fifteen years, Jules has devoted his time to building a family tree. A really big tree. More of a forest.

“We have in our database about eighty thousand relatives of yours,” he says.

Eighty thousand. I try to wrap my head around that number. If he’s right, my relatives could fill four Madison Square Gardens.

On the one hand, as my wife, Julie, points out, I often feel like I have too many relatives already. I’d be happy to trim a few branches. I’m thinking of my cousin David, who, for his wedding, hired a little person dressed as a leprechaun to pop out from under his bride’s dress and twerk with the guests. And then there’s my brilliant but smug brother-in-law Eric, whose favorite phrase is the infuriating “I think what you’re trying to say is . . .”

The point is, do I really want to be part of this mega-tree? Plus, the email has some creepy NSA-like privacy-invasion vibes. How did this dairy farmer know all this about me? And why should I trust him?

On the other hand, the less cynical hand, I’m oddly moved. Here I am, sitting in my home office in New York City, subjected to endless Internet headlines about our world’s seeming descent into disaster—wars, racism—and up pops this startling news about how I’m connected to thousands of other humans across the globe. These newfound cousins would likely come in all shapes, sizes, and ethnic backgrounds: tall cousins and short cousins, white cousins and black cousins, carnivorous cousins and vegan cousins, gay cousins and straight cousins, cilantro-loving cousins and cousins who believe cilantro tastes like Satan’s unwashed tube socks.

All of us different, all of us linked.

What I’m trying to say (as my brother-in-law explained to me later) is that I experienced a profound sense of belonging. I felt a part of something larger than myself. I glimpsed the Ultimate Social Network.

The timing of the email couldn’t have been better. During the last several years, I’ve become increasingly obsessed with family, which might be an inherited trait. When I was a kid, my dad spent years building a family tree. Not quite eighty thousand, but it reached back multiple generations. He’d show me the names of my Polish and Ukrainian great-grandparents. He’d tell me about their lives. How they were farmers and general store owners; one even found a niche selling peacocks to nobles. How some fled the Russian pogroms by hiding in a haystack on the back of a cart. How my great-grandfather was supposed to pick up his wife and kids at Ellis Island but missed their arrival because he was eating a second bowl of soup. How the wife and kids had to stay overnight in the detention facility, confused, ignorant, and anxious they’d be sent back to Poland.

As a young man, I scoffed at these tales. I was an obnoxious little rebel who rejected all institutions, including family. I preferred to spend zero time thinking about my ancestors. Why should I care about these people, just because we happen to share some DNA by accident of birth? It’s not rational. It’s arbitrary. It’s a relic of the past.

But as so often happens to people, I got older, I had kids, and I magically turned into my dad. Now I spend most of my time thinking about family: How can I give my three young sons a sense of belonging? What kind of wisdom and ethics from my ancestors can I pass along to my kids?

And then comes Jules Feldman’s email. It stays in my mind the next day. And the next. And the week that followed. 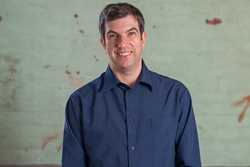 A.J. Jacobs is the author of Thanks a Thousand, It’s All Relative, Drop Dead Healthy, and the New York Times bestsellers The Know-It-All, The Year of Living Biblically, and My Life as an Experiment. He is a contributor to NPR, and has written for The New York Times, The Washington Post, and Entertainment Weekly. He lives in New York City with his wife and kids. Visit him at AJJacobs.com and follow him on Twitter @ajjacobs.

Adventures Up and Down the World's Family Tree

More books from this author: A. J. Jacobs