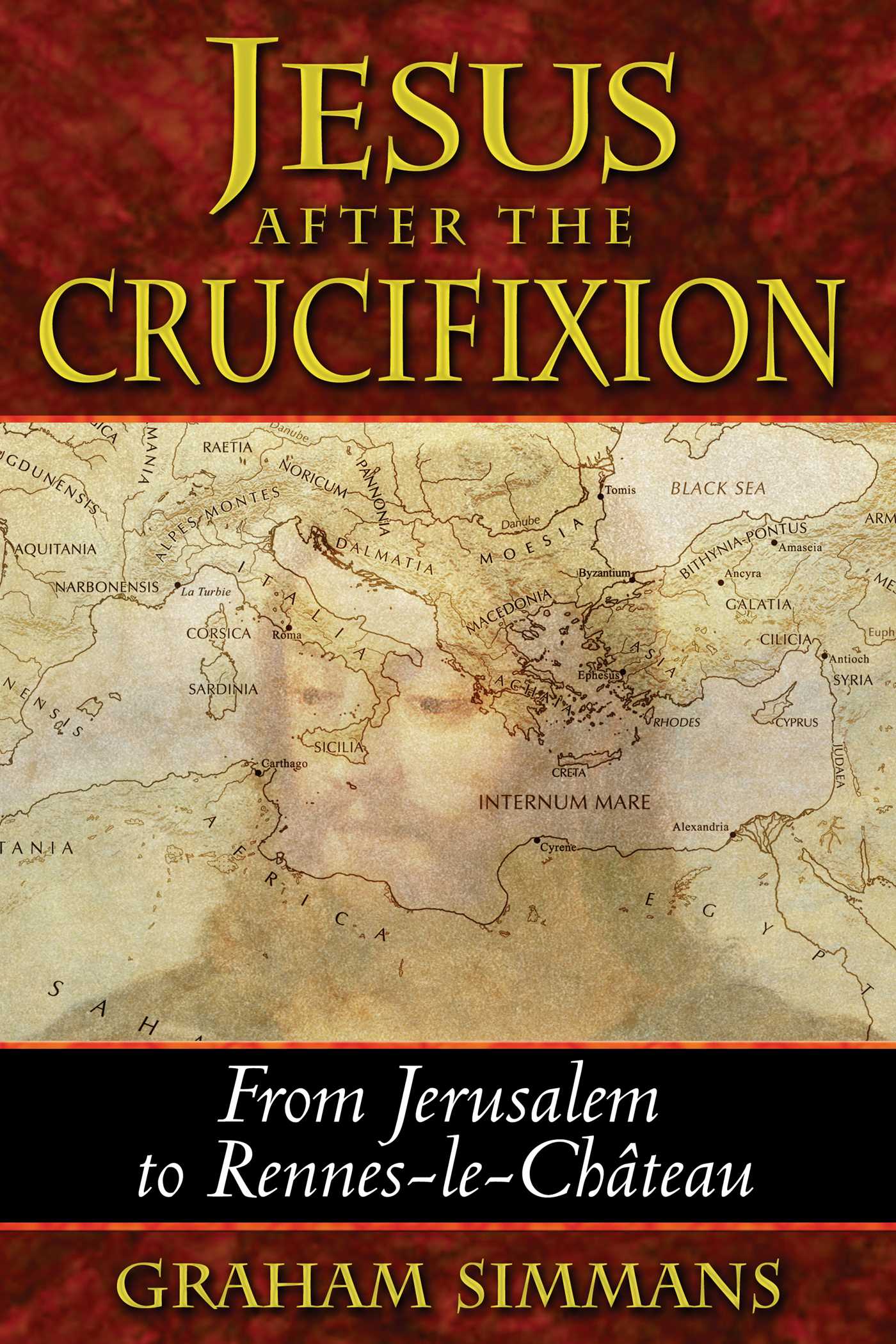 Jesus after the Crucifixion

From Jerusalem to Rennes-le-Château

Suggests that Jesus survived the crucifixion, went to Egypt, then settled in France

• Reveals new discoveries that show the beginnings of Christianity in Egypt

• Presents historical and archaeological research that proves a connection between Jerusalem, Egypt, and Rennes-le-Château in the south of France

• Posits Rennes-le-Château as the actual location of Jesus Christ’s tomb, and that writings by him will be found there

Jesus did not die on the cross. He survived and went to southern France with his wife, Mary. This possibility is proposed by Graham Simmans, who spent many years on a quest to find the real beginnings of Christianity. Simmans believes that the spread of Christianity beyond Jerusalem was tied to Jesus’s survival of the crucifixion and his subsequent emigration to Europe. Using Coptic and Jewish sources, including the Talmud, that allow a glimpse of the Christian philosophy espoused by Jesus, he contends that true Christianity was brought into France, Britain, and Spain from first century Egypt and Judea, not fourth- and fifth-century Rome.

His investigation shows that after a time in Egypt, Jesus settled in Rennes-le-Château, a sophisticated and cosmopolitan center of spiritual diversity. It was a natural move for Jesus to settle in the Narbonne area of France--an area already heavily settled by Jewish and Gnostic groups. Here, safely outside the reach of the cultural dictatorship of the Roman Church, the Gnostic secrets he taught survived the centuries. Later, the Knights Templar centered their activity in the Languedoc region around Rennes-le-Château, where, within the Jewish communities, a well-connected and influential opposition to Rome already existed. This resistance to Rome gave rise to a religious culture that included elements of Gnostic, Pythagorean, and Kabbalistic teachings. Until the Crusades against the Cathar heretics reasserted the dominion of Rome, the culture that flourished around Rennes-le-Château embodied the true essence of Christ’s message.

The Life of Jesus: What We Know and What We Don’t Know

Jesus was imprisoned in Jerusalem when he was thirty-three. He was of the line of David and the real king of Israel. The Romans were anxious that he might declare himself the rightful king of Israel and that the people would follow him, causing serious unrest. Major riots were expected in the city, so he was taken by a large force, consisting of one section of a Roman legion and Temple guards--that is, 560 soldiers and 300 guards. Jesus had entered Jerusalem along the traditional route on Palm Sunday. He had refused to lead certain groups in a riot, and because most of these groups were disappointed, they soon considered him an obstacle to their cause. Thus many extremist Jews wanted him dead.

On Palm Sunday this radical mob, which mingled with the great number of Jesus’ followers, demanded his death. Some scholars claim there is evidence that a number of such Messiahs appeared every year, causing serious problems for Roman authorities. The extremists against him went to the Sanhedrin, who accepted that Jesus must die for his misdeeds and preaching, which was, in their view, contrary to the Jewish creed. They decided, however, they would need Roman approval for his death. As stated in the Bible, Pilatus did not agree, for he did not consider Jesus to have committed any wrong. Thus it was that Jesus was three months in prison.

Because they would not accept this decision, the Sanhedrin sent a message to Caesar (Tiberius) in Rome, who ordered Pilatus to carry out the sentence demanded by the Sanhedrin. Terrible death by crucifixion was reserved for enemies of the Roman state, though it is not certain why this should have been Jesus’ fate. A possible explanation could be that the Sanhedrin had told the Romans that Jesus, as king of all the Jews, had intended to lead the people to seize power.

So Jesus was taken to Golgotha, where he was crucified. Three hours later, two other men, zealots or robbers, were also taken to the crucifixion area. The Bible says Jesus was six hours on the cross, while the other two men died after three hours. After six hours of crucifixion, Jesus entered a state of near-death with a fully conscious mind, his concentration focused on adjusting his breathing and heartbeat to the condition of his tormented body.

Joseph of Arimathea, who was wealthy, knew Pilatus well and made a secret agreement with him. Both men wanted to save Jesus, and Pilatus is said to have been corrupt. One of the soldiers was given an order to push a spear into Jesus’ side, just beneath the third rib from the bottom. This action was intended to relieve the pressure of blood and water to prevent suffocation in order to keep him alive. Today, surgeons know that blood and water will not flow from a body if the person is already dead. Thus the spear enabled Jesus to breathe and survive at that time.

It has now become known that at crucifixion sites, the upright posts were normally left in position and the crossbar was carried across the shoulders by the victim. It is also known, from some skeletons, that crucifixion was sometimes carried out with the victim in a crossed-knee position with the two heel bones nailed together and to the cross. In other cases, the two legs were nailed separately to either side of the cross.

When Jesus fainted, the Romans declared him dead and ordered him taken down from the cross. Joseph of Arimathea helped the Romans, carefully removing the nails so no further damage would be done to Jesus’ limbs. Also present at his removal from the cross were his mother, Mary, John the Apostle, Mary Simeon, Mary Magdalene, and the mother of Jacob. Immediately, oil and a certain powder were placed on the wounds to prevent any show of bleeding, which would have indicated to the Romans that Jesus was not dead. Jesus was then taken to Joseph of Arimathea’s new, empty tomb.

Jesus had suffered the agony of crucifixion, but had transformed his low body energy into a different, high-energy state. The radiation and heat he was emitting are held by some scientists to have been the origin of the image on the Shroud of Turin. For a certain period, while he was lying in his tomb and for some time after, his high-energy body overshadowed his physical body, which had become very faint and almost transparent. This was why his disciples often did not recognize him, as mentioned in several places in the Bible. His high-energy body was capable of penetrating solid matter, or performing “miracles” (as Jesus had done before his crucifixion). This explains his mysterious appearances to his followers and also supports the Christian doctrine of his ascension. By and by, as his physical body became stronger and healed, the high-energy body withdrew. Yet there was still a great deal of energy around and with Jesus.

He went to a place of the Essenes in Damascus (Damas, the Damascus of the Dead Sea Scrolls), where he stayed for three years, healing and teaching, part of the time in hiding. During this period, the Romans and the Sanhedrin were disturbed about the empty tomb and the great power of Jesus’ teaching. They set out to capture all followers, friends, and relatives of Jesus and all Essenes they could find. Many died and the situation became very serious. Because he had succeeded so wonderfully in his mission, it was decided that Jesus and his family would go to a place of safety in southern France. Only John the Apostle and his mother Mary knew this secret.
Graham Simmans

Graham Simmans (1919-2005) was the author of Jesus after the Crucifixtion and the coauthor of Rex Deus: The True Mystery of Rennes-le-Château and the Dynasty of Jesus. He spent fifteen years living in Rennes-le-Château.

“This book is a testament to Graham Simmans’ lifetime of devotion to seeking out the truth. Contentious without being confrontational, this book will by its very nature be controversial, appealing to the broad audience now alert to such mysteries, following The Da Vinci Code. Above all, it will be valued as a book that will make the reader think.”

– Lynn Picknett and Clive Prince, authors of The Templar Revelation and The Sion Revelation

“. . . catapults us into a new dimension far beyond the recapitulations of previous authors. Graham Simmans’ legacy opens an enticing window on what might really have happened to Christ if he survived crucifixion.”

– Robert Feather, author of The Mystery of the Copper Scrolls of Qumran and The Secret Initiation of J

"If you are looking for an easy to understand introduction to the possible survival of the teachings of Gnostic followers of Jesus, this book is for you. I highly recommend it."

"The Knights Templar in the Golden Age of Spain is one of the best Templar books available today. An excellent and erudite read, with a central focus on Templar history in Spain, you will not find a better tome than this one."

"Those unfamiliar with the fundamental Holy Blood Line premise will find Jesus After the Crucifixion to be a very good overview, more read devotees of the subject will enjoy Simmans' book as his last testament on a subject he devoted his life to understanding and sharing with others what he had learned."

". . . quite an outstanding achievement and definitely a delightful read. Recommended."

Jesus after the Crucifixion

From Jerusalem to Rennes-le-Château