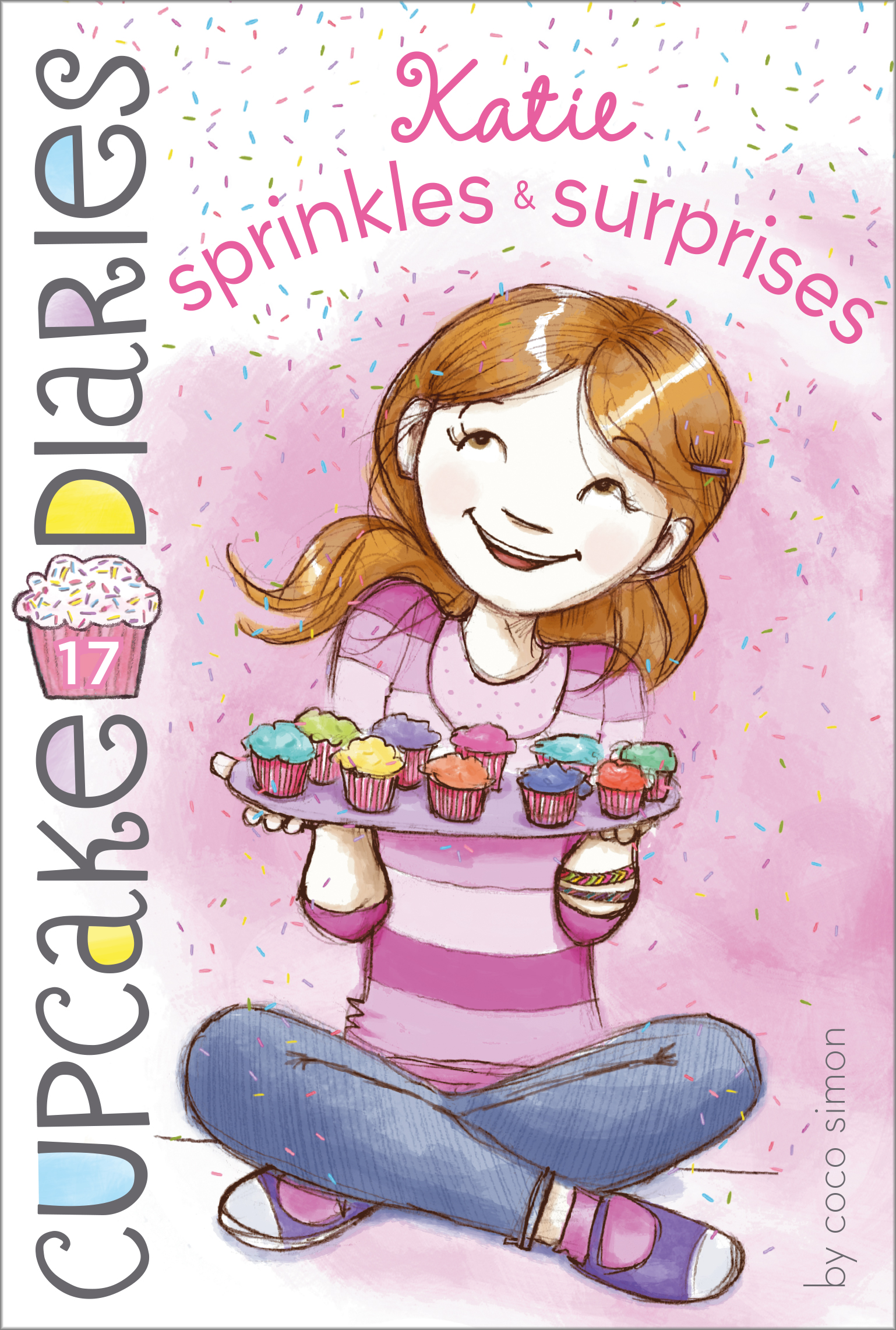 The Cupcake Club comes to Katie’s defense when a surprise at school leads to unfair gossip.

When Katie’s mom says it’s time for Katie to meet her new boyfriend, Katie is excited and nervous. She thinks she’s prepared, but she’s shocked instead. Her mom’s boyfriend is Jeff Green—as in Mr. Green, a math teacher in her grade! Katie tries to act as normal as possible, but when mean girl Olivia finds out, she tells everyone that Katie is getting special treatment because her mom is dating a teacher. How can Katie stop Olivia and deal with all the new events in her life? It’s the Cupcake Club to the rescue, as Katie’s friends come to her defense, including an unexpected ally.

But my best friend, Mia, can be a little harsh sometimes. “But they like you!” she protested, doubled over giggling.

I was sleeping over at Mia’s house, and even though she has a perfectly comfortable brand-new bed, she spread out her sleeping bag on the floor next to mine, so we could hang out and talk. But whenever anyone lies on the floor, Mia’s little fluffy dogs, Tiki and Milkshake, think that it’s playtime. So both of them were dancing around my face, sniffing me and licking my nose.

“Seriously, Mia!” I pleaded. “Call off your ferocious beasts!”

“Okay! Okay!” Mia got up and scooped up one wriggling dog in each arm. “Sorry, babies. Katie doesn’t want to play with you.”

She dropped them out the door and then shut it quickly.

“I like playing with them,” I said, sitting up. “But they were attacking me.”

“They’re terrors,” I said. “But at least they’re cute. It’s too bad Mom is allergic to pets. I would love to have a dog. A big fluffy one.”

Then there was a knock on the door.

I smiled. “That’s my favorite time of day!”

We both jumped up and followed Eddie down the stairs to the kitchen, where the table was set up for an ice-cream sundae buffet. There were three cartons of ice cream, a bottle of chocolate sauce, a can of whipped cream, and bowls filled with cherries, sprinkles, and crumbled-up cookies.

Mia’s stepbrother, Dan, was leaning against the kitchen sink, eating out of a bowl that looked like it was mostly filled with whipped cream.

“What are you guys, twins?” he asked. (I forgot to mention that Dan is in high school. I have come to believe that most high school boys are kind of rude—that’s just how they are. Well, except for my friend Emma’s brother Sam. He is perfect.)

Anyway, I should explain why Dan made that crack about us being twins. It’s because Mia and I were wearing matching pajamas, pink ones with a cupcake pattern on them. We had bought them with the money we made from the cupcake business we’re in with our friends Emma and Alexis. It’s kind of funny. Any time I make money from the cupcakes, I end up spending it on something cupcake related. Last time, I got this cool stenciling kit you can use to make designs on your cupcakes. I guess you can say I am cupcake obsessed.

Mia is not as cupcake obsessed as I am, but she loved the pajamas as much as I did. And the sleepover was the perfect time to wear them.

“Yes, we’re twins,” Mia replied to Dan sarcastically, because apparently the best way to deal with a rude teenage boy is to be rude back. It must have worked, because Dan just shrugged and kept eating.

Eddie was anxious for us to dig in. “Come on, girls. The combination possibilities are endless!”

Mia’s mom, Mrs. Valdes, entered the kitchen and gave Eddie a hug. “What a sweet thing to do, honey,” she said. “Thanks!”

Mia looked at me and rolled her eyes again. I know it makes her all cringey when her mom and stepdad get lovey-dovey in front of her.

“What are you waiting for? Dig in before it melts!” Eddie said, motioning to us.

Mia grabbed a bowl and spoon and then stood there, thinking. I knew whatever she made would not only be the perfect balance of flavor, but also beautiful. Mia is a true artist. I’m not so picky. I took my bowl and started piling in everything.

Chocolate, mint-chip, and butter-pecan ice cream. Chocolate syrup, cookie crumbles, and cherries. Then I sprayed on the whipped cream and finally added the sprinkles.

“Katie, those sprinkles are going to fall off,” Mia remarked.

“You have to put them on last,” I informed her. “Because they make it pretty.”

Rainbow sprinkles are my favorite because they’re so colorful. Sometimes when people ask me what my favorite color is, I say “rainbow” because I just can’t decide. Mom heard me say it so much that she got me rainbow socks for Christmas. They’re my favorite.

I sat down at the table and was already halfway done eating my ice cream when Mia finally finished creating her bowl. As I predicted, it was a work of art. Mia had a perfect scoop of chocolate ice cream in her bowl, topped by a flower design painted with chocolate syrup. The center of the flower was a cherry.

Mia grinned. “And delicious!” Then she dug in with her spoon.

“It’s for a good cause,” Mia said, eating another spoonful.

When we finished we helped to clean up the kitchen and then went back up to Mia’s room and sprawled out on the floor again, this time without dogs.

“I’m so glad you could sleep over tonight!” Mia said. “What’s your mom doing again?”

“She and her new boyfriend are going to see a Broadway show, and she won’t be back till late,” I said. “She figured it would be better if I slept over than if she came and got me at midnight.”

“That’s good, but we’ll still be awake at midnight,” Mia said. “Remember last time? We were up until three!”

I shook my head. “And then Eddie made us pancakes at, like, the crack of dawn. I was so tired!”

Then I paused. There was something I had been wanting to ask Mia.

“So, Mia, I need your advice,” I began. “Of all my friends, you are the best expert on this topic.”

“Moms with boyfriends,” I said. “I mean, your mom and Eddie dated for a while before they got married, right?”

“Was Eddie always so nice?” I asked. “For a stepdad, he seems really great.”

“He is,” Mia said. “But it was still weird when they started dating. I kind of kept hoping that Mom would get back together with my dad, you know?”

I nodded, but I really didn’t know. Mia’s mom and dad got divorced just a few years ago, but my dad left me and my mom when I was a little baby. I didn’t grow up with him or anything. So there isn’t any part of me that wants to see them get back together. But I could understand why Mia might feel that way.

“So, why are you asking?” Mia asked. “Because of this new boyfriend?”

“Jeff,” I replied. “I haven’t met him yet. All I know about him is that he’s a teacher or something, which isn’t too exciting, if you ask me. And he likes to run, and he has a daughter who’s younger than I am.”

“A lot, I think,” I told her. “She’s, like, happy all the time. She doesn’t get mad anymore when I do dumb stuff, like leave my socks on the floor.”

“Hmm,” Mia said thoughtfully. “Mom was like that right before she and Eddie got serious.”

“That’s what I’m afraid of,” I said. “On the drive over here she said it’s time for me to meet Jeff. Like, in person!”

“How else would you meet him?” Mia asked.

Mia looked thoughtful. “You know, Eddie was the only boyfriend Mom ever introduced me to. I think she waited until she knew she was serious about him.”

“But what about your dad?” Katie asked. “Is he serious about Lynn?”

I knew Mia’s dad had been dating a woman named Lynn, who had a little boy who was kind of a pain.

“I think dads are different,” Mia answered. “He’s introduced me to other girlfriends before Lynn, and they didn’t last. So Lynn might not last either.”

But Mia shook her head. “No, I’m pretty sure when moms do it, they mean it.”

“I hope so too,” Mia said. “But look on the bright side. You have the upper hand here. If you hate him, your mom is going to have a problem. If he hates you, it’s his problem.”

Mia flopped over onto her back. “It’ll work out,” she said. “So, hey, did you hear about the new math teacher?”

“Oh, yeah!” I replied, quickly forgetting all about the Jeff problem. “Mr. Green, right? Everyone keeps talking about how cool he is.”

“He replaced Mr. Rodriguez,” Mia reported. “Mr. Rodriguez left town because his wife got a great new job in Chicago. So now Emma has Mr. Green. She says he’s really funny and sweet. And I heard that at his old school, he got elected Teacher of the Year, like, five times in a row.”

Mia nodded. “He just started. And you know what? I’ve heard a bunch of girls showed up to his first track practice just so they could stare at him.”

“And guess what else I heard?” Mia asked. “Olivia Allen has the biggest crush in the world on him. She’s in the same class as Emma, and Emma says Olivia even goes to get extra after-school help from him even though she’s pretty good at math. She’s just faking it.”

I shook my head. “That is so weird, but it’s exactly something Olivia would do!”

Mia and I gossiped some more, and even though we stayed up late, we fell asleep just before midnight. That night I dreamed Mom took me into this white room with a door, and she said, “Katie, I’d like you to meet Jeff.” And then she opened the door, and do you know what was behind it?

An ice-cream sundae with sprinkles! That’s what I get for eating ice cream late at night.
Coco Simon