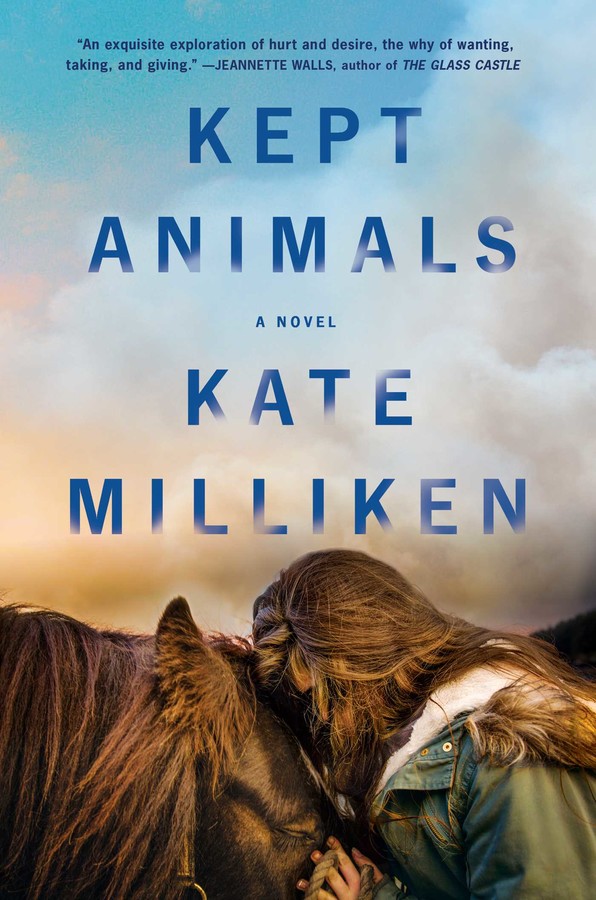 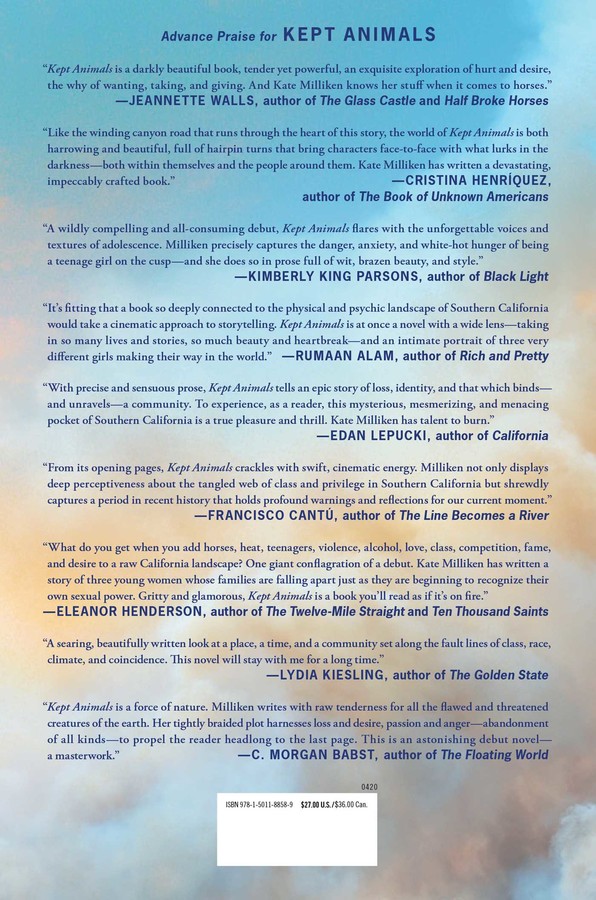 “Kept Animals is a darkly beautiful book, tender yet powerful, an exquisite exploration of hurt and desire, the why of wanting, taking, and giving. And Kate Milliken knows her stuff when it comes to horses.” —Jeannette Walls, author of The Glass Castle and Half Broke Horses

“In this rugged and ravishing debut, a tragic car accident upends the lives of multiple Southern California families—particularly three teenage girls, whose lives and desires intersect in ways none of them could have imagined.” —O, The Oprah Magazine

A bold, riveting debut novel of desire, betrayal, and loss, centering on three teenage girls, a horse ranch, and the accident that changes everything.

It’s 1993, and Rory Ramos works as a ranch hand at the stable her stepfather manages in Topanga Canyon, California, a dry, dusty place reliant on horses and hierarchies. There she rides for the rich clientele, including twins June and Wade Fisk. While Rory draws the interest of out-and-proud June, she’s more intrigued by Vivian Price, the beautiful girl with the movie-star father who lives down the hill. Rory keeps largely separate from the likes of the Prices—but, perched on her bedroom windowsill, Rory steals glimpses of Vivian swimming in her pool nearly every night.

After Rory’s stepfather is involved in a tragic car accident, the lives of Rory, June, and Vivian become inextricably bound together. Rory discovers photography, begins riding more competitively, and grows closer to gorgeous, mercurial Vivian, but despite her newfound sense of self, disaster lurks all around her: in the parched landscape, in her unruly desires, in her stepfather’s wrecked body and guilty conscience.One night, as the relationships among these teenagers come to a head, a forest fire tears through the canyon, and Rory’s life is changed forever.

Kept Animals is narrated by Rory’s daughter, Charlie, in 2015, more than twenty years after that fateful fire. Realizing that the key to her own existence lies in the secret of what really happened that unseasonably warm fall, Charlie is finally ready to ask questions about her mother’s past. But with Rory away on assignment, Charlie knows she must unravel the truth for herself. 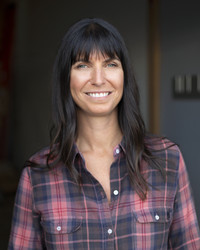 Kate Milliken is the author of the 2013 Iowa Short Fiction Award–winning collection of stories, If I’d Known You Were Coming. A graduate of the Bennington College Writing Seminars, she has received fellowships from the Vermont Studio Center and the Tin House Summer Workshop. She lives in Northern California with her family. Kept Animals is her first novel.

One of Oprahmag.com’s “44 LGBTQ Books That Are Changing the Literary Landscape”
A Readers Digest "Quarantine Book Club" Book
The Millions Most Anticipated of 2020
One of Electric Lit’s 14 Highly Anticipated LGBTQ+ Books Coming This Spring

"In this scorching novel set on a ranch in California's Topanga Canyon, a tragedy binds three teenage girls together during the summer of 1993. Flashing between the past and the present, Kate Milliken's narrative burns slowly, building to a wildfire."
—Marie Claire

"Early-’90s California provides a vivid backdrop to this novel that follows the interactions between teen ranch hand Rory Ramos and her rich clientele, including a troublesome pair of teenage twins and a beautiful movie star’s daughter, as each of them reacts to a car accident that indelibly changes the path of their futures."
—Vogue

"In this rugged and ravishing debut, a tragic car accident upends the lives of multiple Southern California families—particularly three teenage girls, whose lives and desires intersect in ways none of them could have imagined."
—Oprah

"A bold, riveting debut novel of desire, betrayal, and loss, centering on three teenage girls, a horse ranch, and the accident that changes everything."
—Zyzzyva

“Kept Animals is a darkly beautiful book, tender yet powerful, an exquisite exploration of hurt and desire, the why of wanting, taking and giving. And Kate Milliken knows her stuff when it comes to horses.”
—Jeannette Walls, author of The Glass Castle and Half Broke Horses

“In this rugged and ravishing debut, a tragic car accident upends the lives of multiple Southern California families—particularly three teenage girls, whose lives and desires intersect in ways none of them could have imagined.”
—Oprahmag.com

"Milliken, who won the Iowa Short Fiction Award for her collection If I’d Known You Were Coming, explores the fissures that undergird a ranch, a stable, and a community in Topanga Canyon, Calif., just before a catastrophic fire. With themes of class, race, migration, work, land, and ownership, this is a beautifully written novel."
—The Millions

"This is a coming of age novel with spot-on narrative pacing and intriguing characters, set in a time and a place that are characters in themselves. It’s a thrilling read with a breathless climax."
—Electric Lit, 14 Highly Anticipated LGBTQ+ Books Coming This Spring

“Milliken’s debut is a surprisingly suspenseful coming-of-age novel…swift-moving and engaging…Rory is a lovely companion, and readers will enjoy following her through her trials and tribulations.”
—Booklist

“It’s fitting that a book so deeply connected to the landscape (both physical and psychic) of Southern California would take a cinematic approach to storytelling. Kept Animals is at once a novel with a wide lens—taking in so many lives and stories, so much beauty and heartbreak—and an intimate portrait of three very different girls making their way in the world.”
—Rumaan Alam, author of Rich and Pretty

“From its opening pages, Kept Animals crackles with swift, cinematic energy. Milliken not only displays deep perceptiveness about the tangled web of class and privilege in Southern California, but shrewdly captures a period in recent history that holds profound warnings and reflections for our current moment.”
—Francisco Cantú, author of The Line Becomes a River

“With precise and sensuous prose, so gorgeous it's gasp-inducing, Kept Animals tells an epic story of loss, identity, and that which binds—and unravels—a community. Milliken's unforgettable characters face dangers of all kinds, be it familial, romantic, or of the natural world. To experience, as a reader, this mysterious, mesmerizing, and menacing pocket of Southern California is a true pleasure and thrill. Kate Milliken has talent to burn. I love this novel.”
—Edan Lepucki, author of California

"A wildly compelling and all-consuming debut, Kept Animals flares with the unforgettable voices and textures of adolescence. Milliken precisely captures the danger, anxiety, and white-hot hunger of being a teenage girl on the cusp—and she does so in prose full of wit, brazen beauty, and style."
—Kimberly King Parsons, author of Black Light

“What do you get when you add horses, heat, teenagers, violence, alcohol, love, class, competition, fame, and desire to a raw California landscape? You get one giant conflagration of a debut novel. Kate Milliken has written an epic coming-of-age story of three young women whose families are falling apart just as they are beginning to recognize their own sexual power. Dangerous and dark, sexy and haunting, glamorous and gritty, Kept Animals is a book you’ll read as if it’s on fire.”
—Eleanor Henderson, author of The Twelve-Mile Straight and Ten Thousand Saints

“Kept Animals is a searing, beautifully written look at a place, a time, and a community set along the fault lines of class, race, climate, and coincidence. This novel will stay with me for a long time.”
—Lydia Kiesling, author of The Golden State

"Like the winding canyon road that runs through the heart of this story, the world of Kept Animals is both harrowing and beautiful, full of hairpin turns that bring characters face-to-face with what lurks in the darkness—both within themselves and the people around them. Kate Milliken has written a devastating, impeccably crafted book."
—Cristina Henriquez, author of The Book of Unknown Americans

“Kept Animals is a force of nature. Milliken writes with raw tenderness for all the flawed and threatened creatures of the earth. Her tightly braided plot harnesses loss and desire, passion and anger--abandonment of all kinds--to propel the reader headlong to the last page. This is an astonishing debut novel—a masterwork.”
—C. Morgan Babst, author of The Floating World