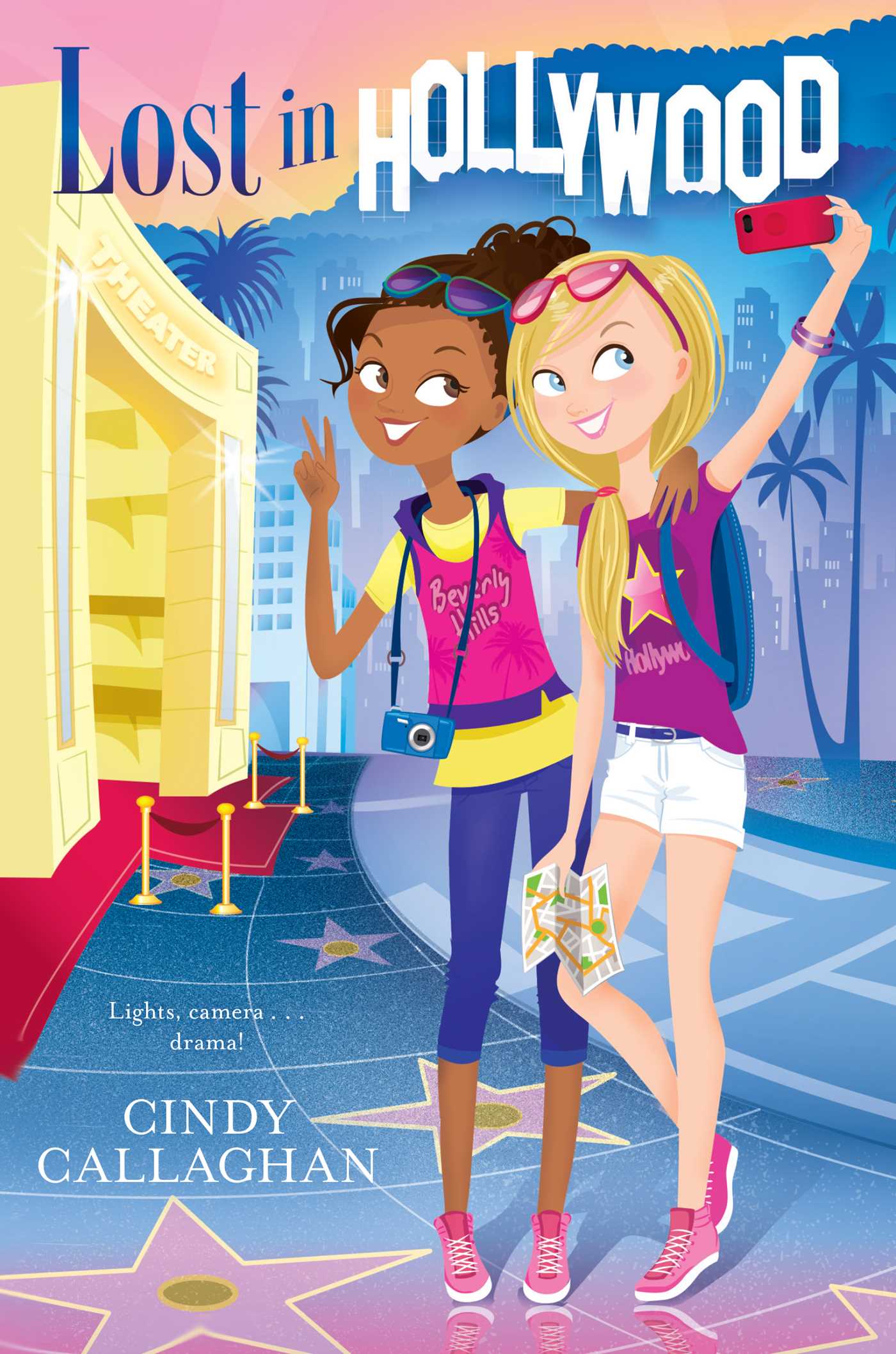 Ginger is on a mission to find her family’s missing fortune in glamorous Hollywood in this M!X novel from the author of Lost in London, Lost in Paris, Lost in Rome, and Lost in Ireland (formerly titled Lucky Me).

Thirteen-year-old Ginger Carlson feels like she is the only normal one in her family. Her father is an inventor who sells his gadgets online, Mom is obsessed with classic movies, and her brother Grant thinks he is from outer space. Luckily, Ginger has a totally normal BFF, Payton, and they have big plans for the future—they plan to become doctors and open a practice together in a big city. But first, they’re partnering on the state Science Olympics where they’re sure to take home the gold for their eighth grade class with their model of the brain.

The Olympics training is interrupted when the Carlson family gets an urgent call that their eccentric Aunt Betty, a former actress who lives in Hollywood, is in serious trouble. The bank is going to take her house unless she can give them the money she owes. The Carlsons head to LA to sort things out for Aunt Betty, along with Payton, who tags along for the West Coast adventure.

In a moment alone with the girls, Aunt Betty tells them what’s really going on. Because she didn’t trust banks, Aunt Betty stashed her money in a secret hiding place. Only problem—it’s so secret, she can’t remember where that hiding place is! That’s what she’s been doing all around town—looking for her fortune. Can Ginger and Payton help find the money—and give Aunt Betty the Hollywood ending that she deserves?

The problem is that I’m surrounded by weird.

Dad said, “Come look at this one, Ginger.”

He was talking to me. I’m Ginger. I’m named after one of my mother’s favorite old movie stars, a lady named Ginger Rogers. (Mom is totally obsessed with old movies.)

I walked over to see my dad’s latest contraption; he makes things out of stuff.

I looked at this Saturday’s gizmo. “What is it?”

“Uh-huh.” He had taken the chinstrap off my little brother’s football helmet. FYI, Grant—who’s also named after an old movie star—doesn’t use the helmet for football. He tapes balls of aluminum foil to it to help him connect with aliens who might try to talk to him. Although they never actually have; he does it “just in case.”

I told ya—surrounded by weird.

Anyway, Dad took the chinstrap and melted it to pipe cleaners that he’d bent like candy canes. Then, he stuffed the cup of the chinstrap with wads of gauze, like from a first aid kit.

Dad hooked the pipe cleaners over his ears. “You can wear this to soak up your drool while you sleep . . . or . . . I suppose, while you’re awake, if you’re the kind of person who drools when you’re awake. I would imagine there are people like that. And it keeps your pillowcase dry, or your shirt, if you’re awake.”

“I guess it would come with extra gauze pads,” I pointed out

“It’s . . . ah . . . great, Dad. This could be TBO.” He was always looking for The Big One (TBO). While I agreed there might be people who drool a lot in their sleep—and maybe even some when awake—I wasn’t convinced this was TBO, but it always made my dad smile when I told him that.

“I’m gonna need you for the video.”

“Of course.” I am always in the video. Usually my part in it said, “You know what you need?” Then I would say to someone, usually a part played by Grant, “You need a Drool-O-Dabbler.”

Grant would ask, “A Drool-O-Dabbler? What’s that?” Then my dad would introduce the product and an online bidding war would begin. “War” is a bit of an exaggeration. The highest bidder buys the Dabbler. The craziest part is, there are always people who want his stuff.

“Just let me know when we start filming,” I said, and went to let Grant know about our next acting gig.

I knocked and opened his bedroom door. Until just recently, his room used to be our room, which was wrapped in posters of UFOs and extraterrestrials. I just had to get out of there. My new room is very pink and neat. I picked out every single thing in it: lamp, curtains, beanbag chair, etc. . . .

Payton and I have said that Grant will be our first patient.

Payton, btw, is my BFF and future business partner—we’re going to be brain surgeons.

“You’re needed for an internet video later,” I said.

“No duh. Not like it was complicated,” I said. I didn’t know if Grant actually had a shortage of brain cells or if he had some type of cerebral condition that contributed to his whack-a-doodle behavior. I was about to harass him more when the phone rang. I ran to the kitchen to grab it.

“Hello. This is Ginger Carlson,” I said. One day I’d have someone who would answer the phone for Payton and me: “Hello. Dr. Ginger Carlson and Dr. Payton Paterson’s office.”

“Hello. My name is Leo. I’m Betty-Jean Bergan’s housekeeper. Can I talk to you about her?”

This guy thought I was my mom. Probably because I sound so mature. People always tell me that.

“Uh—” I tried to interrupt, but didn’t succeed.

“Your aunt has had another incident. It was serious. Dude, I don’t know what to do about her.”

I asked, “What do you mean another incident?” And why is he calling me (or my mom) dude?

“Get this, she wanted to climb the Hollywood sign,” Leo the housekeeper said.

My mom’s aunt Betty-Jean (or ABJ as I call her) lives in Hollywood, California. She’s my coolest relative: she’s beautiful, used to be an actress, and lives this totally glam life in Hollywood. I’ve always wanted to visit her, but she comes here instead of us going there. At least she used to; it’s been about three years since I’ve seen her. I never understood why she would want to come to Delaware when she lives in California.

“There’s only one Hollywood sign,” Leo continued. “She’s out of the hospital, and they said she’s gonna be okeydokey, hunky-dory, A-okay, but there’s something else. A sitch.”

“What kind of sitch?” I asked.

“The money kind. She has none: zip, zero, piggy bank empty.” He paused. “The bank wants to take away her house.”

“You’re telling me. She asked that I call you to see if the family would come out here and help her.”

Out There? As in Hollywood? For real? Obvs I wanted to go to LA, and my mom, the classic movie nut, would totally love it. Dad always says he has to work, but if ABJ needs him, I bet he’d take time off. I mean, he finds time to make contraptions, right?

“I hope you do come because she doesn’t only owe the bank money, if you know what I mean.”

I covered the mouthpiece and yelled to Mom and Dad in the living room, “ABJ’s housekeeper is on the phone. He says that she fell off the Hollywood sign! The bank is taking her house!! So we need to go to Los Angeles to help her!! Can Payton come?! Next week is spring break!!”

Mom rushed away from the TV—something she only does for a pee emergency or a grease fire. “Let me have that.” She snatched the phone. “And please stop yelling.” She took the phone out of my hand. “Hi, sorry about that. Okay. Uh-huh. Uh-huh. Yes. We’ll be there.” She hung up. Now Dad and Grant joined us in the kitchen.