The Bone Witch meets Sherlock Holmes in this thrilling historical fantasy about a girl with the ability to raise the dead who must delve into her city’s dangerous magical underworld to stop a series of murders.

Catherine Daly has an unusual talent. By day she works for a printer. But by night, she awakens the dead for a few precious moments with loved ones seeking a final goodbye. But this magic comes with a price: for every hour that a ghost is brought back, Catherine loses an hour from her own life.

When Catherine is given the unusual task of collecting a timepiece from an old grave, she is sure that the mysterious item must contain some kind of enchantment. So she enlists Guy Nolan, the watchmaker’s son, to help her dig it up. But instead of a timepiece, they find a surprise: the body of a teenage boy. And as they watch, he comes back to life—not as the pale imitation that Catherine can conjure, but as a living, breathing boy. A boy with no memory of his past.

This magic is more powerful than any Catherine has ever encountered, and revealing it brings dangerous enemies. Catherine and Guy must race to unravel the connection between the missing timepiece and the undead boy. For this mysterious magic could mean the difference between life and death—for all of them.

Chapter One CHAPTER ONE
WAKING THE DEAD WASN’T nearly so unpleasant as having to dig them up in the first place.

Catherine Daly paused her work to wipe the sweat from her brow. In the cool night air, her breath misted and the wind gusted at her back, tossing dead leaves up against the low cemetery wall. A fine enough night for digging, all in all. It had rained earlier in the day, softening the soil, and even without the lantern burning at the grave’s edge, Catherine could see well by the quarter of moonlight.

She was used to the dark.

Up on the cemetery’s hillside, she had a decent view of the cityscape below. Invercarn glowed with soft light, buildings lit by streetlamps, their facades elegant and imposing. The knolls and tree-lined paths of Rose Hill Cemetery promised only the best for those moneyed enough to be interred here. Not that they could much enjoy it once the coffin was nailed.

Catherine looked around at the sudden silence to find her colleague had elected to break when she had. Bridget leaned against her spade, the point sunk into the dirt.

They had an audience after all. Catherine wanted him going back to Mr. Ainsworth with nothing but the coin he still owed and praise for their diligence. Thus far, he had watched them wordlessly, keeping back a few paces from the grave.

He stood with his hands clasped behind his back, chin lifted. It was an attempt to maintain poise, perhaps, but by now Catherine had come to know when a client was nervous. He wasn’t much older than she and Bridget—in his early twenties, at a guess—and had approached Ainsworth just last week.

His little sister had died of fever while he was away on business. He only wanted to say goodbye. Whatever time he was allowed, whatever the cost, he would pay it.

Catherine pitched another pile of dirt out of the grave. The well-to-do liked to bury their dead deep. There were resurrectionists in the city intent on digging up bodies to sell to medical students. Mortsafes were common implements in Rose Hill—the iron devices were cast over a number of graves on the hillside, set to guard the dead until the flesh became too rotted to be of use.

The robbers found their prizes more often in the public cemetery on the other side of the river. Rose Hill was private, guarded; Catherine was aware Watt must have paid off the watchmen to keep their distance.

The night wore on as she and Bridget continued to dig. They passed six feet, then eight before Catherine’s spade hit wood.

At the sound—a solid and unmistakable thunk—Bridget put aside her own spade and took up the crowbar. Catherine fetched her coat. Inside it was a piece of type. She rolled the metal between her fingers, looking down at the ground beneath her. Then—

“Only an hour?” he asked. It was a tone of voice Catherine had heard before. In it was a plea for more, but magic could offer only so much.

Watt was here to say farewell.

“Yes,” said Catherine in answer. “Your sister cannot remain long in such a state of being. She has no place here, not anymore.”

Watt inclined his head in a nod. He held his hat in his hands now, and his fair hair matched his wan complexion. Bridget loosened the last nail and moved aside the casket’s lid. The girl inside was as fair as Watt, wearing a fine evening dress, surrounded by the pale lining of the casket. Catherine knelt at the foot of it, clutching her solitary piece of metal type.

It was a type piece that held an hour of her life. If she brought it to the lantern, she knew she’d find the stain across it. She’d pricked her palm earlier, marking the metal with blood. Now she set it on the casket’s edge. Placing her hand atop it, she whispered, “Mary Watt.”

Beyond the walls of dirt, the stars shone bright and dizzying. Catherine stood up, and the girl’s eyes blinked open. For a moment, the two simply stared at each other. Mary was pale as a ghost, and much like one, she was still dead. An hour of Catherine’s own ticking clock could give her only a semblance of life. It was quite clear—from her glazed eyes to her ashen cheeks—that she no longer belonged among the living. And when she spoke, her voice was thin and distant.

Catherine swallowed. Climbing out of the pit, she turned to Watt. “You have the hour, sir.”

Watt made his way over to the grave where his sister lay. He was trembling. Once he was inside, the girl said, “Geoffrey.”

Catherine met Bridget’s gaze, and together they headed to the nearby cemetery wall, where they waited under the branches of an oak tree.

Catherine pulled on her coat and looked out at the city. By the time Watt had his hour and they filled in the grave, it would be near dawn. For now, shadows darkened the cobblestones, obscuring the places between the gas lamps and rolling carriages.

Bridget leaned against the stone ledge, arms crossed. In a quiet voice, she said, “Mr. Watt didn’t need to hear you speak of his sister so unkindly.”

Catherine gave her an assessing look. “I don’t think telling him the truth is an unkindness. Mr. Ainsworth should be informing clients of such things.”

“Perhaps,” said Bridget, a touch uneasy. She didn’t like speaking out against their employer, no matter how far they were from earshot. Her blond hair was coming loose from its pins, ruffled by the breeze. She had fair wrists, slender hands calloused from working jobs like this one, dirt under her fingernails. Catherine was equally pale-skinned and angular, her dark hair done up in a chignon.

Once Watt’s hour came to an end, the two returned to the gravesite. Watt was embracing his sister, the girl limp in his arms. Catherine looked elsewhere as he lowered Mary back into the casket. When he climbed out of the grave, he clasped their hands in turn, seemingly unaware of the dirt staining his trouser knees. He pressed a silver coin into Catherine’s palm, smiling despite the tears in his eyes. They were the same shade of blue as his sister’s.

Catherine cleared her throat. “Mr. Ainsworth will pay you a call tomorrow morning,” she told him, “in regard to outstanding payment.”

Watt lifted his hat to them, then left the cemetery without a backward glance.

When they were alone, they secured Mary’s casket and took to heaping the dirt back in. Catherine touched the coin in her pocket. After this, they’d walk out of Rose Hill Cemetery, head over the bridge, and return to their room at the print shop. Gripping her spade, she sank the blade into the earth. She thought of Mary’s pale eyes, her raspy voice. She thought of Geoffrey Watt clasping her hand, accentuating his thanks with silver. Soon he would blur alongside all the other clients in her mind. 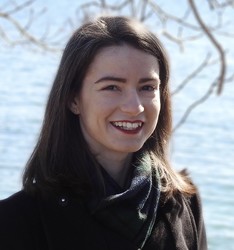 Kelly Powell has a bachelor’s degree in history and book and media studies from the University of Toronto. She currently lives in Ontario. She is the author of Songs from the Deep and Magic Dark and Strange. Visit her online at PowellKelly.com or on Twitter @KellyCPowell.

"Gothic in its texture and Dickensian in story, this will satisfy any mystery and magic reader."