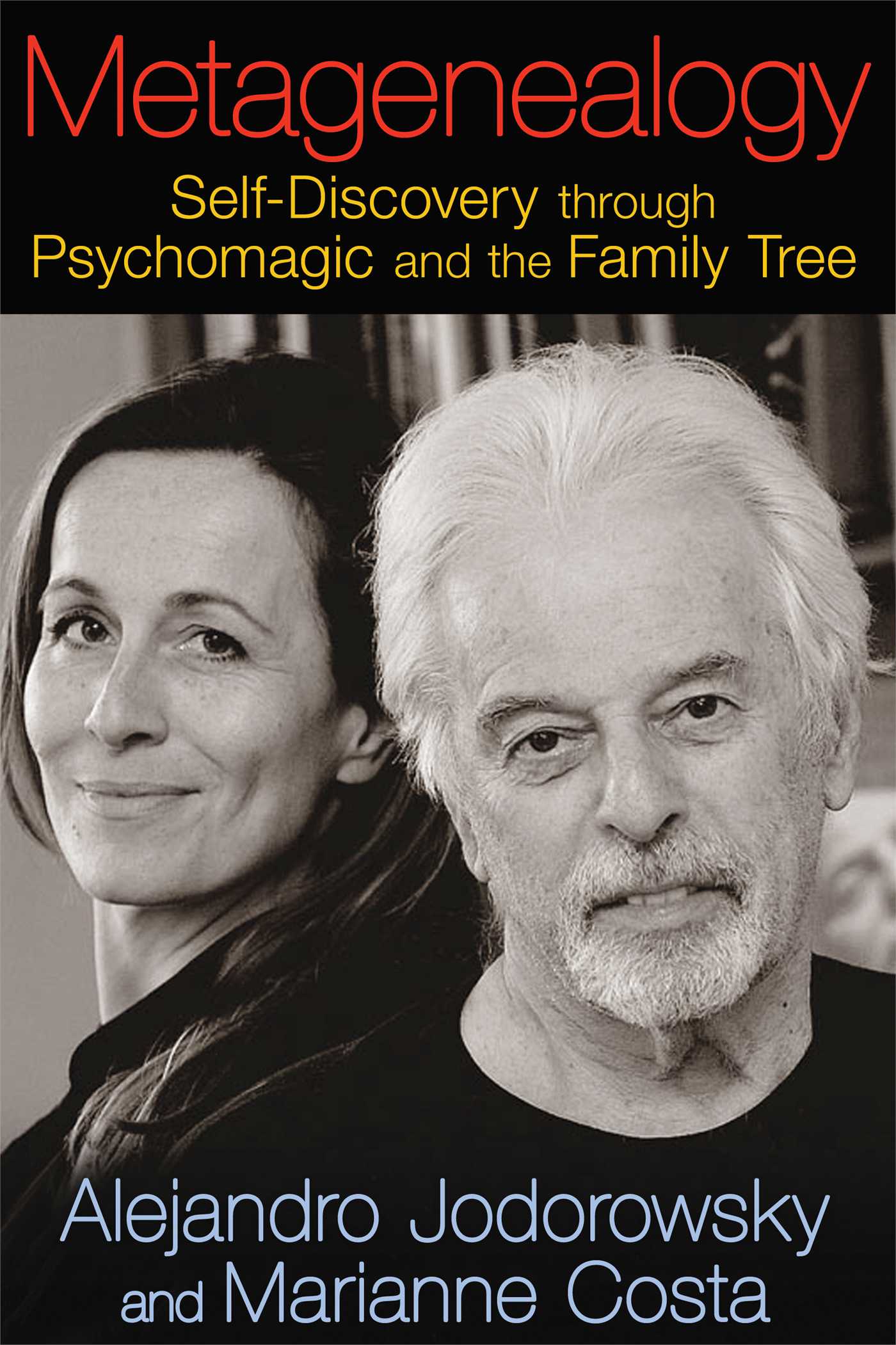 Self-Discovery through Psychomagic and the Family Tree

• Provides exercises to uncover your family’s psychological heritage, heal negative patterns of behavior and illness in your family tree, and discover your true self

• Explains how we are the product of two forces: repetition of familial patterns from the past and creation of new ideas from the Universal Consciousness of the future

• Interwoven with examples from Jodorowsky’s own life and his work with the tarot, psychoanalysis, and psychomagic

The family tree is not merely vital statistics about your ancestors. It is an embodied sense of self that we inherit from at least four prior generations, constituting both a life-giving treasure and a deadly trap. Each of us is both an heir of our lineage and a necessary variation that brings the family into new territory. Are you doomed to repeat the patterns of your parents and grandparents? Or can you harness your familial and individual talents to create your own destiny?

In Metagenealogy, Alejandro Jodorowsky and Marianne Costa show how every individual is the product of two forces: the imitating force, directed by the family group acting from the past, and the creative force, driven by the Universal Consciousness from the future. Interweaving examples from Jodorowsky’s own life and his work with the tarot, psychoanalysis, and psychomagic, the authors provide exercises, visualizations, and meditations to discover your family’s psychological heritage and open yourself to the growth and creativity of Universal Consciousness. They reveal how identifying the patterns, emotional programming, and successes and failures of the four generations that influence you--your siblings, parents, aunts, uncles, grandparents, and great-grandparents--allows you to see beyond the stable identity formed by family lineage. It frees you to overcome your inherited subconscious patterns of behavior and illness, stop the transmission of these patterns to future generations, and reconnect with your true self and unique creative purpose in life.

Orientation to the Work
Jodorowskianism: The Basics

The Role of Obstacles

Every individual is the result of two forces: the imitator (directed by a familial group) and the creator (which comes from the universal Consciousness).

This double influence and the levels of the unconscious fit together in a concentric manner.

We can, therefore, visualize each individual as a center of a series of concentric circles that overlap in the different layers of consciousness. To the planetary level (humanity as it exists today), we are all subjected to the forces of imitation: traditions, habits, rules, beliefs, and so forth. From the level of cosmic or universal consciousness, we enter into pure Consciousness and nothing impedes the future project.

Our genealogy tree, complying also with the pressures of society and culture, shapes us with forces of imitation, repetition, conformity, tradition. The work of the individual Consciousness consists in undoing these limitations that do not correspond to our true personality in order to carry out a new, unknown, original project.

The path of the consciousness goes through the tree, society, and culture in order to integrate with the universal plane. That is to say: if I quit repeating the prescriptions of my tree, of the society in which I live, of the culture in which I have been raised and established in a significant manner, I will contribute a bonus to my tree, my society, my culture. For example, in a family marked by ruin or exile, the individual success of one of its members, who now enjoys a good life, can contribute information on what he can do: prosper, do well in school, and so forth. Or, in another case, when the bonding has been cut, if one of the members rediscovers the meaning of love and of human value, he could become the light that illuminates the rest of them.

Socially, the great artistic, scientific, or cultural revolutions are perceived, from the beginning, as offensive to the established order. Similarly, at the global level, yesterday’s utopian ideas about sustainable development and respect for natural resources are today considered beneficial. The circles of repetition always resist innovation because tradition (the conservation of the familial, cultural, or social identity) demands of the members of the clan the reproduction of its own agenda.

The dynamics between the forces of repetition and that of creation can be interpreted in the following way: we are all children of our parents and, at the same time, the unique creation of the universe that exceeds the individual wills of the parents, who simply serve as intermediaries. Therefore, the tree will be the result of the study of a series of formations and distortions imposed on this essential Being that we all are.

We will study the obstacles as both necessary and fruitful, allowing our project to achieve its goal: the past wants to make the future make sense, but, in reality, it is the future that gives meaning to the past, granting it a new significance. In short, this is the meaning of our work.

The role assigned to the inherited tree can be positive or negative as, for example:

- The son or daughter who is appointed to carry on the family tradition in order to enhance the intellectual or social level of the family, in order to repair a series of deaths within the clan, or to repair the family reputation by having a good marriage or by maintaining a given social position.
- Inversely, the “black sheep” of the family is the carrier of all the stigmas that the genealogy tree needs to expel from itself but which have fallen on one of its members in particular, turning the tree into a negative heir: it is the one who has become an alcoholic or drug addict; the one who has become a “prostitute” having chosen the path that does not conform to the ideology of the clan; the one who has become a compulsive gambler and ruins the family with failures which end in misery.

All of these cases, present in one way or another in all families, are the results of inheritance.

From the moment in which someone intends to incorporate new information into her tree, the resistance will manifest in the form of enormously varied obstacles, and, at first, these obstacles are going to appear insurmountable. As occurs in myths and legends, we must confront them in order to transform them into stages of our liberation. There is an initiatory tale that sums up the essential function of the obstacle:

A peasant receives a visit from his God. He kneels in front of him and thanks him for having granted him the gift of life. “I owe everything to you, however, I need to file my complaints, “I work for my land to make the wheat grow lush, but you send hurricanes, monsoons, hungry birds, mice, torrential rains, and pests. Can you, for once in my life, spare me these troubles?” God satisfies the peasant’s pleading. When he plants the seed, no gale shakes the earth, the climate is mild throughout the year, it rains just enough, no sign of any bird or any harmful insect . . . and for lack of obstacles to overcome, the seed weakens, rots in the good soil, and fails to germinate.

The Call of the Future
By Alejandro Jodorowsky

The first time I understood the importance of the future on our mental and physical health was in 1972 during the shooting of Holy Mountain. Due to unfounded rumors, the filming of this movie became a real nightmare. Looking to shoot the colonial architecture in Mexico City, I found the venerable Basilica of Our Lady of Guadalupe, in front of which I shot a truckload of naked corpses--gunned-down students. Word spread that I had conducted a black mass inside the temple, defaming the Virgin. There began a campaign of insults and threats in the tabloids. I was summoned and threatened by a minister of government who demanded the removal of said black mass, and I was not given the chance to prove the scene’s non-existence. At dawn, following this disagreeable discussion, a group of police in civilian clothing, the falcons, stood in front of my house, screaming, “Jodorowsky, we are going to kill you!”

The next day, I put all of my negatives in the trunk of my car and, with my wife, my kids, and my cats, drove to New York via Tijuana. There, I began editing my movie. These unjust persecutions, along with the sadness of having lost my territory and my friends, and the legitimate doubts about the quality of what I had shot (I wanted nothing less than to revolutionize cinema), caused a state of anxiety that made me sweat gallons of water each night. I soaked at least seven t-shirts each night. . . . None of the pills prescribed by the doctors ceased this phenomenon.

One day, while buying Taoist treatises in an esoteric bookstore, the clerk recognized me and struck up a conversation. In light of the subject, the clerk mentioned a Chinese sage living in New York who, apart from being a famous Tai Chi Chuan Master and teaching the art of calligraphy, gave free consultations each week to Chinatown’s sick. His name was Cheng Man Ch’ing but his students nicknamed him “Whiskers Man.”1 I went to see him in a gym lobby. He was seated at a table covered with a thin cushion. He listened to the sick talk about their symptoms while listening, with his fingertips, to the different heart rhythms in their wrists.

After standing in line for a couple of hours--there were at least fifty consultants--I sat down in front of a beautiful elder. He emanated an extraordinarily gentle energy. He looked at me as if he had known me for a long time. He felt my wrists and asked me about my problem. I told him, “I perspire all night long.”

Alejandro Jodorowsky is a playwright, filmmaker, composer, mime, psychotherapist, and author of many books on spirituality and tarot, and over thirty comic books and graphic novels. He has directed several films, including The Rainbow Thief and the cult classics El Topo and The Holy Mountain. He lives in France. In 2019, Alejandro Jodorowsky was cited as one of the "100 Most Spiritually Influential Living People in the World" according to Watkins Mind Body Spirit magazine.

Marianne Costa has worked with Jodorowsky since 1997, coteaching workshops on Tarot and family tree-therapy. The author of No Woman’s Land, she lives in Paris.

Self-Discovery through Psychomagic and the Family Tree