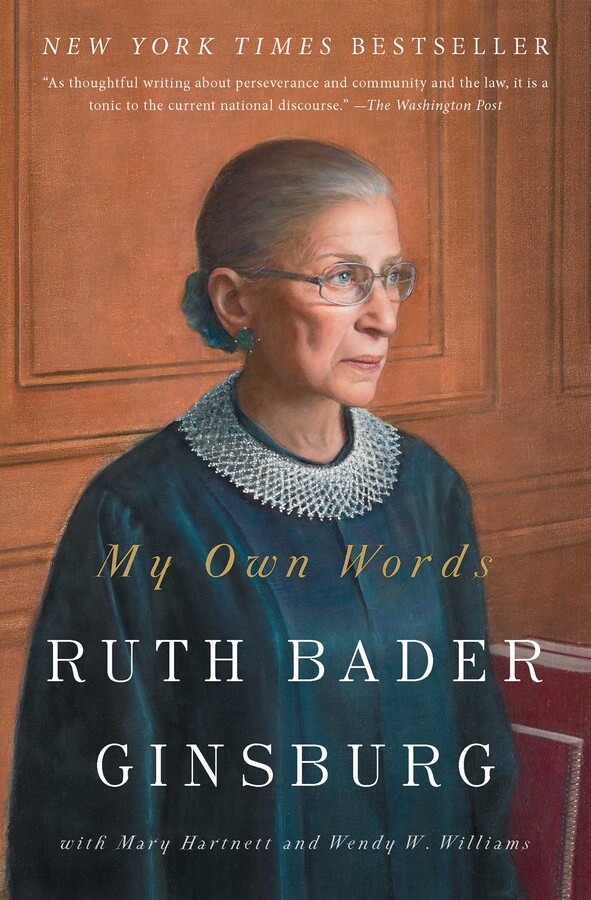 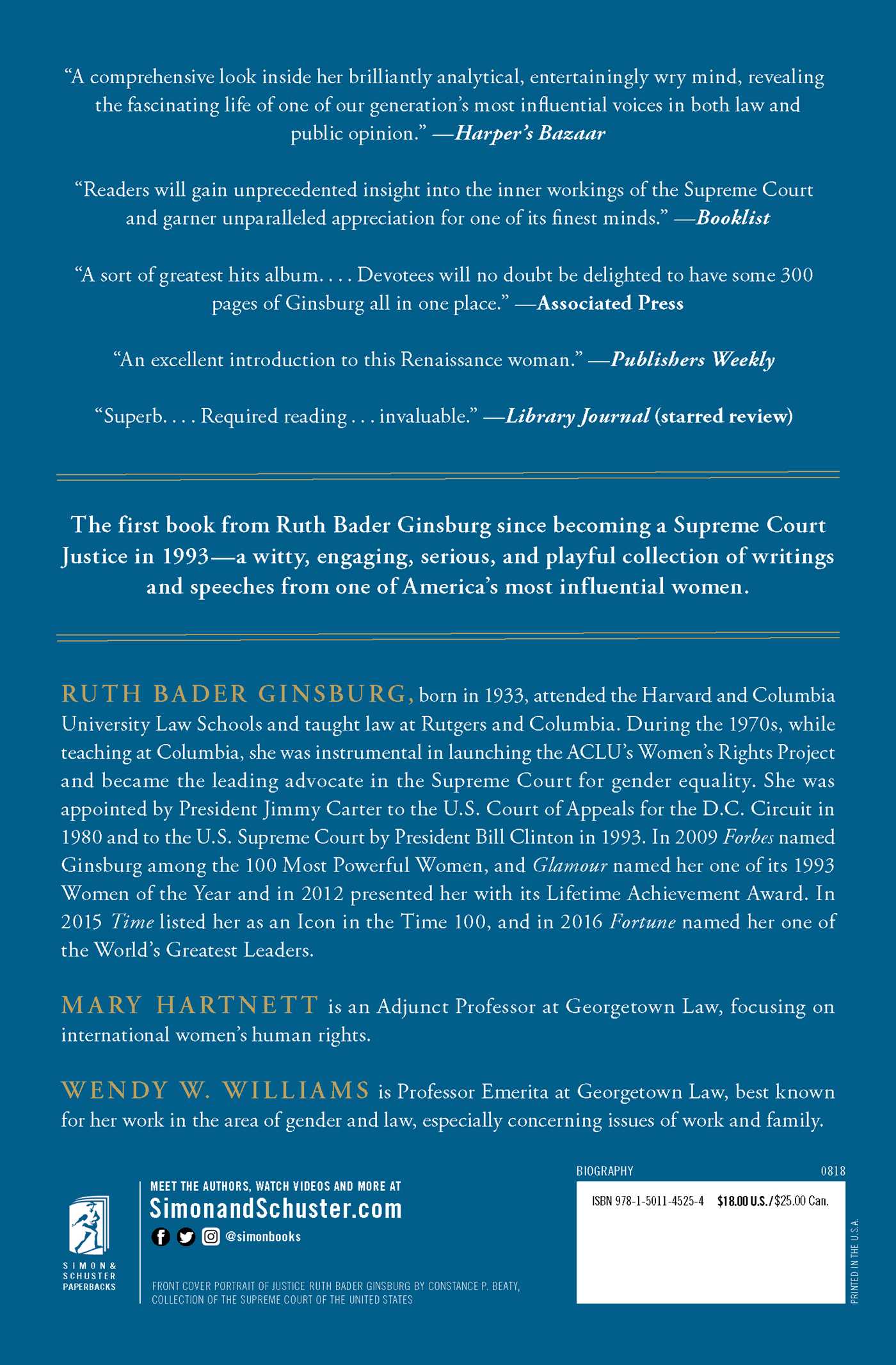 The New York Times bestselling book from Supreme Court Justice Ruth Bader Ginsburg—“a comprehensive look inside her brilliantly analytical, entertainingly wry mind, revealing the fascinating life of one of our generation's most influential voices in both law and public opinion” (Harper’s Bazaar).

My Own Words “showcases Ruth Ginsburg’s astonishing intellectual range” (The New Republic). In this collection Justice Ginsburg discusses gender equality, the workings of the Supreme Court, being Jewish, law and lawyers in opera, and the value of looking beyond US shores when interpreting the US Constitution. Throughout her life Justice Ginsburg has been (and continues to be) a prolific writer and public speaker. This book’s sampling is selected by Justice Ginsburg and her authorized biographers Mary Hartnett and Wendy W. Williams, who introduce each chapter and provide biographical context and quotes gleaned from hundreds of interviews they have conducted.

Witty, engaging, serious, and playful, My Own Words is a fascinating glimpse into the life of one of America’s most influential women and “a tonic to the current national discourse” (The Washington Post).

My Own Words 1 Editorial for the School Newspaper Highway Herald, June 1946


ELEANOR ROOSEVELT had been the first lady throughout most of Ruth Bader’s childhood. Ruth’s mother, who deeply admired the first lady, often read Mrs. Roosevelt’s “My Day” newspaper columns aloud to Ruth. Eight months after President Roosevelt’s death, Eleanor Roosevelt was appointed by President Truman as a U.S. delegate to the newly established United Nations General Assembly. The UN Charter, in its preamble, declared as one of its aims “to regain faith in fundamental human rights, in the dignity and worth of the human person, in the equal rights of men and women and of nations large and small.” Eleanor Roosevelt, pursuant to that goal, became in April 1946 the first chairperson of the newly created U.N. Commission on Human Rights. In the wake of World War II, Ruth and her mother followed closely as Eleanor Roosevelt led the efforts that would result, in 1948, in the adoption of the Universal Declaration of Human Rights, a document Roosevelt celebrated as “the international Magna Carta for all mankind.”

Two months after Eleanor Roosevelt was chosen to head the UN Commission on Human Rights, Ruth Bader, by then a thirteen-year-old eighth grader and editor of her school newspaper, the Highway Herald, wrote a column of her own. Her column, the first piece in this collection, was a sign of things to come. While other students wrote about the circus, school plays, and the glee club, Ruth discussed the Ten Commandments, Magna Carta, Bill of Rights, Declaration of Independence, and United Nations Charter.

Editorial by Ruth Bader, Grade 8B1

Since the beginning of time, the world has known four great documents, great because of all the benefits to humanity which came about as a result of their fine ideals and principles.

The first was the Ten Commandments, which was given to Moses while he was leading the Israelites through the wilderness to the land of Canaan. Today people of almost every religion respect and accept them as a code of ethics and a standard of behavior.

Up until the thirteenth century, conditions under the kings of Europe were unbearable for the commoners. Taxation was high, living conditions poor and justice unknown. It was then, in 1215 AD, that the barons and peers of England met and drew up a charter called the Magna Carta. After forcing King John to sign it, the document was declared the governing law of the land. This gave the English peasants the first rights ever granted to them.

When William of Orange, a Dutchman, was offered the English throne, his chief ambition was to use the military powers of Britain to aid his beloved Holland in its war with Spain. In accepting this offer, he had to grant certain concessions to the English people. So, in 1689, he signed the Bill of Rights. This limited the King’s powers and gave much of the government control to parliament, another important stride in the history of the world.

The Declaration of Independence of our own U.S. may well be considered one of the most important steps in the shaping of the world. It marked the birth of a new nation, a nation that has so grown in strength as to take its place at the top of the list of the world’s great powers.

And now we have a fifth great document, the Charter of the United Nations. Its purpose and principles are to maintain international peace and security, to practice tolerance, and to suppress any acts of aggression or other breaches of peace.

It is vital that peace be assured, for now we have a weapon that can destroy the world. We children of public school age can do much to aid in the promotion of peace. We must try to train ourselves and those about us to live together with one another as good neighbors for this idea is embodied in the great new Charter of the United Nations. It is the only way to secure the world against future wars and maintain an everlasting peace. 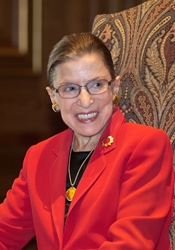 Born in 1933, Ruth Bader Ginsburg attended the Harvard and Columbia University Law Schools, and taught law at Rutgers and Columbia. During the 1970s, while teaching at Columbia, she was instrumental in launching the ACLU’s Women’s Rights Project, and became the leading advocate in the Supreme Court for gender equality. She was appointed by President Jimmy Carter to the US Court of Appeals for the DC Circuit in 1980 and to the US Supreme Court by President Bill Clinton in 1993. In 2009, Forbes named Ginsburg among the 100 Most Powerful Women. Glamour named her one of their 1993 Women of the Year and in 2012 presented her with their Lifetime Achievement Award. In 2015,Time listed her as an Icon in the Time 100, and in 2016 Fortune named her one of the World’s Greatest Leaders.