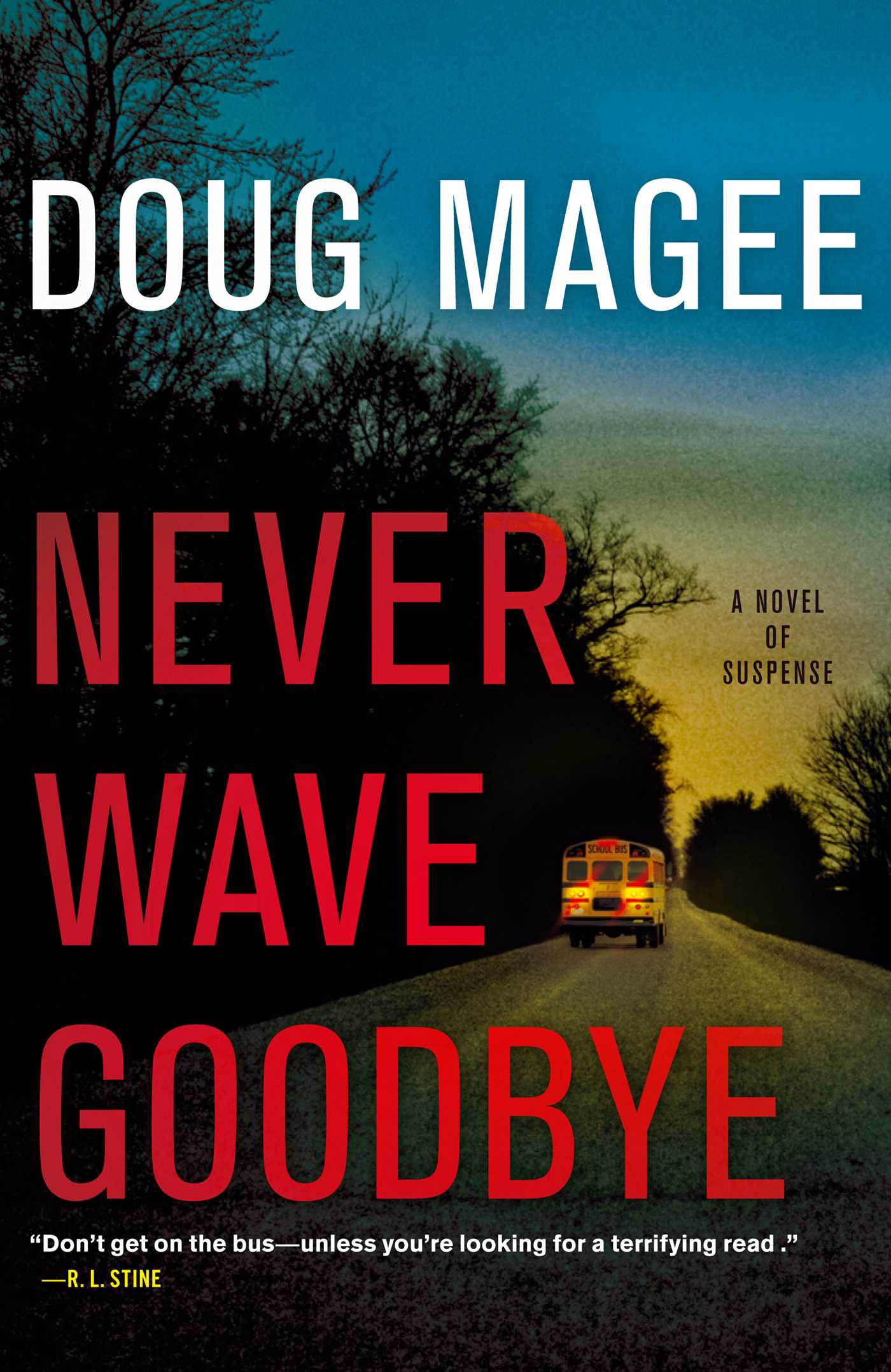 A riveting family drama about the kidnapping of children en route to summer camp, Never Wave Goodbye is a fast-paced and thrilling debut.

An innocent rite of passage turns into a nightmare for four couples, exposing their secrets and risking the lives of their children.

After passing the bittersweet parental milestone of putting her daughter, Sarah on the bus to sleep-away camp for the first time, Lena Trainor plans to spend the next two weeks fixing all the problems in her marriage. But when a second bus arrives to pick up Sarah for camp, no one seems to know anything about the first bus or its driver.

Sarah and three other children have been kidnapped, and within hours of the crime the parents receive an email demanding $1,000,000. When the specifics of the delivery terms throw suspicion on the parents of two of the abducted children, some of the parents begin to turn on each other, exposing fault lines in already strained marriages and forging new alliances. While the kidnapped children are living their parents' worst nightmare, the police are trying to sort the lies from the truth in conflicting stories and alibis that seem to be constantly changing.

Deftly weaving the emotional story that pits the parents of the missing campers against the police—and each other—with the fate of the kidnapped children hanging in the balance, Never Wave Goodbye will keep readers holding their breath until the last page.

This reading group guide for Never Wave Goodbye includes an introduction, discussion questions, ideas for enhancing your book club, and a Q&A with author Doug Magee. The suggested questions are intended to help your reading group find new and interesting angles and topics for your discussion. We hope that these ideas will enrich your conversation and increase your enjoyment of the book.

When Lena Pyle helps her daughter Sarah onto a bus for summer camp, she is thankful for her daughter’s independent nature—and for the chance to spend two weeks alone with her distant husband. But when a second bus arrives to pick Sarah up, a horrified Lena learns that the first was part of an efficiently orchestrated ransom plot.  Sarah and three other neighborhood children have been kidnapped and ferried away to a cabin deep in the Adirondacks.

As the four sets of parents argue with each other and the FBI over the best course of action, the kids are left alone in the wilderness; and in the end, both groups are ultimately fighting for their survival. Author Doug Magee, with the help of an emotionally convincing cast, explores what exactly makes a family—and what can derail one completely.

1.       Which family do you think reacted most appropriately to the kidnappings?  The Pyles, with their level headed despair?  The Walkers, with their business and faith?  The Williams, with their tenacity and skepticism?  The Rostenkowskis, with their solemnity and self medication?  Is there any right way to deal with this sort of tragedy? How would you cope?

2.       Discuss the figures of authority throughout the story:  Detective Martin, Agent Witherspoon, and the various officers standing guard with the families.  What did you make of their mixture of sympathy and commitment to the case?

3.       Why was Sarah able to lead the children through the woods?  Could she sense her mother’s prayers?  What made her so fearless as compared to Linda, Tommy, and Franklin?

4.       How did you react to Sheila Walker’s sermon at the church?  How do you reconcile hope and faith, especially in the face of such distress?

5.       Discuss the book’s epilogue.  Did you expect Sarah and Linda would come to be so estranged?  What do you think happened to Tommy and Franklin?

6.       Should the parents have realized something was off with J.D.?  Are they at all responsible, or simply victims?

7.       Should David disclose his infidelity?  Are Sarah’s abduction and Lena’s pregnancy the things that save David and Lena’s marriage?

8.       Chase/J.D. is convinced he’s a flawless actor.  Do you think he played his parts well?  What do you think of his involvement in the kidnappings?

10.   Did you expect any of the families to be complicit in the ransom plot?  How did you react to the knowledge of who was responsible for the abduction?

1.        Research a number of real-life kidnappings and compare them to the fictional one in the book.  How do they differ?  Do the operations seem as efficient (or at least, seemingly organized) as Mr. Everett and Chase’s?

2.       The children are left in the woods with almost no way of communicating with the outside world.  See if you can go a day without using your cell phone or computer.  Do people begin to wonder where you are?

3.       Read another novel involving kidnapping (Try Jan Burke’s Kidnapped, or one of the many other suspense novels of abduction).  How do they stack up to Never Wave Goodbye?  Are they believable?  How do the families in those stories react?

4.       Practicing the utmost safety, visit your nearest camping grounds and see what it’s like to be in the wilderness for a few days.  Be sure to avoid bears and the bodies of hikers.

5.       When leaving your loved ones, practice Lena and her grandmother’s rules about not waving someone goodbye.  Does this make the farewell more poignant?  Do you agree at all that you shouldn’t “shoo someone off”?


A Conversation with Doug Magee

1.        What sort of research did you have to do for this book?  Is the kidnapping in your book based on or inspired by a true story?

The kidnapping in the book was not inspired by any true story. I simply had a “what if” moment one day and ran with the story from there. I did in a way research the families and their responses years ago when I published a book of interviews with families who had had a loved one murdered (What Murder Leaves Behind: The Victim’s Family, Dodd, Mead).  In interviewing a number of families that had experienced these tragedies I saw a wide variety of responses and searches for meaning. The Williams family in my book is similar to a family whose son was the victim of a random shooting.  The other characters in Never Wave Goodbye are amalgams of people I interviewed and people I know.

2.       The families’ responses to the abductions vary greatly, from the Pyles’ quiet hysteria to the Walkers’ faith and business sense.  Is there any ‘right’ way to react to tragedy? How might you react?

There is no “right” way to react to a tragedy just as there is no right way to love someone. I think we really compound people’s pain when we expect them to grieve or heal the way we think we might.  I have no idea how I would react to a nightmare such as the abduction of one of my children. Perhaps that’s one of the reasons I decided to have the four families have such different reactions.

3.       The ransom plot was elaborate, but suffered from a number of hiccups.  Would you consider Mr. Everett and Chase’s operation to be professional?  Or were they doomed from the start?

Detective Martin at one point says that the kidnappers appeared to be more than some guys sitting around drinking beer and deciding to snatch some kids as a lark. I tried to imagine kidnappers who were not simply interested in money, but who had some psychological needs that they thought could be met by an abduction. I think operating that way made them vulnerable to the many pitfalls their crime entailed. I liked the fact that their elaborate plot was essentially undone by a little girl’s demands of her father.

4.       Do you agree with Lena’s grandmother’s superstition that people should never wave goodbye?

I suppose I do, though I’m not superstitious about it. A wave goodbye can be a pretty sad image to leave with someone.

5.       One could argue that the children handle the kidnapping more reasonably than the adults.  Why do you think they’re able to compose themselves so strongly, especially in the wake of vicious bears and dead abductors?

The parents and the kids were dealing with two related but different sets of problems. For the parents, it was the great uncertainty of what had happened to their children. That kind of unknowing can be the worst possible aspect of a missing child. The kids, however, knew where they were in the sense that they weren’t lost to themselves, and so they were dealing with specific problems such as food, bears, and the path home. I think nine-year-olds, because of their limited life experience, can be somewhat oblivious to dangers around them and thus more optimistic in such stressful situations.

6.       David’s affair remains unrevealed by story’s end. Why did you choose to keep it hidden? Do you think his and Lena’s marriage is transformed in some way by the kidnappings and Lena’s pregnancy?  Can these sorts of things “shock” a family back into some semblance of togetherness?

Actually I believe families who experience tragedies such as a murder or kidnapping are much more likely to be split apart by the experience. When I was researching my book on victims’ families I think the statistic was that nearly half the couples went through divorce within a year of the tragedy.  As far as David’s infidelity is concerned, I think he realized that a confession while Sarah was missing would only compound the deep mistake he made in having the affair in the first place. I definitely think Lena and David’s marriage is transformed for the better by what they went through. I wouldn’t recommend it for couples whose marriage is in trouble, of course, but some extreme situations force us to see the world, ourselves and our loved ones differently, in a better light.

I felt I had put the families, especially the kids, through quite a ringer and I wanted to see what they might be like ten years later. I was surprised that Linda had absorbed so much of the tragedy personally, but it made sense once I realized that she in a way had to bear the burden of her parents’ crime.

8.       The end of the story, with Lena “guiding” Sarah through their memories of pin-the-tail-on-the-donkey, is an almost magical element to the book, which is otherwise grounded in a realistic world.  Do you believe in these sorts of ethereal connections between parents and their children?

I happen to believe that there are powerful and deep connections among all of us, not just parents and children, connections we are not aware of for the most part. I don’t see these as mystical or necessarily extraordinary. Computers and the internet are pale imitations of the ways in which we are knit together. I think both Lena and Sarah tap into this immense power when they each decide in their own way to go beyond the mind, to trust something other than rationality. They are immersed in what can be seen as a deeply irrational moment and instead of trying to think their way out they rely on something in their bones, in their being that eventually works.

I am working on another novel.  I can’t say anything about it right now, but I think readers of Never Wave Goodbye will be interested.  Please stay tuned. 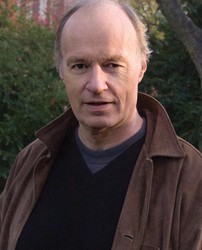