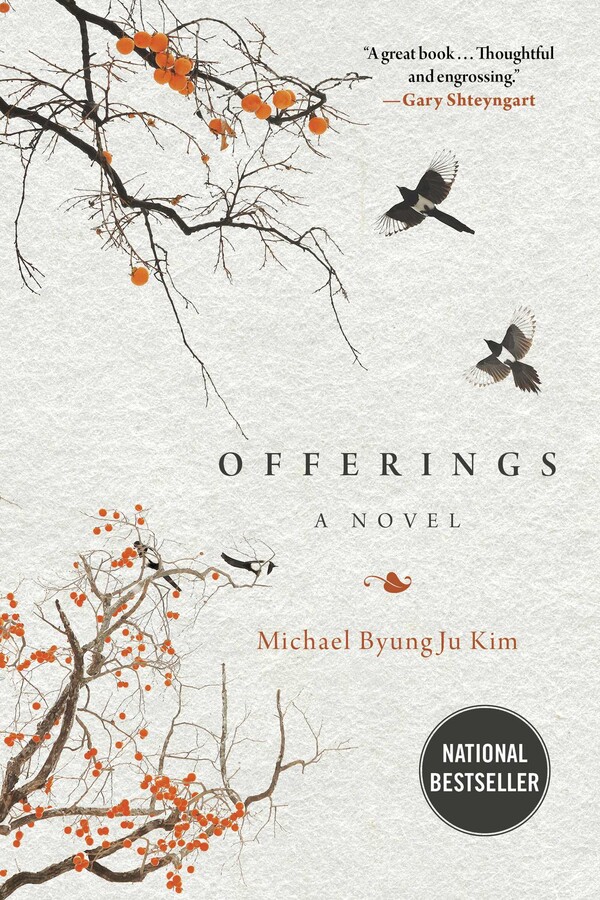 The national bestseller that Gary Shteyngart has called, "A potent combination of a financial thriller and a coming-of-age immigrant tale. . . . Offerings is a great book."

With the rapidly cascading Asian Financial Crisis threatening to go global and Korea in imminent meltdown, investment banker Dae Joon finds himself back in his native Seoul as part of an international team brought in to rescue the country from sovereign default. For Dae Joon—also known by his American name of Shane, after the cowboy movie his father so loved—the stakes are personal.

Raised in the US and Harvard Business School–educated, Dae Joon is a jangnam, a firstborn son, bound by tradition to follow in the footsteps of his forebears. But rather than pursue the path his scholar-father wanted, he has sought a career on Wall Street, at the epicenter of power in the American empire. Now, as he and his fellow bankers work feverishly with Korean officials to execute a sovereign bond offering to raise badly needed capital, he knows that his own father is living on borrowed time, in the last stages of a disease that is the family curse. A young woman he has met is quietly showing the way to a different future. And when his closest friend from business school, a scion of one of Korea's biggest chaebol, asks his help in a sale that may save the conglomerate but also salvage a legacy of corruption, he finds himself in personal crisis, torn by dueling loyalties, his identity tested.

On a snowy day fifteen winters ago, I came home.

Asia was in crisis, and I came to save Korea. Land of my birth, home of my ancestors, my gohyang.

We touched down early at Gimpo, dawn uncurling its rosy fingers outside. “Welcome to the Land of Morning Calm,”the PA said. Snow fell lightly; a blanket of white covered the giwa rooftops of the houses lining the runway.

They had told me in New York to pack my bags for Seoul, saying, “You are Korean, aren’t you?”

There was a low hum at the airport. Visitors shuffling in line, officers tapping keyboards, bags circling on the carousel. Beneath it all, a stillness. The stillness of my childhood that used to fill our classrooms. When we were taught to be quiet, and not move. Words unspoken, thoughts unexpressed.

The officer at Passport Control looked from the eagle on my blue passport to me. “Koondae?” he asked. Military duty.

When I was twelve, I asked my father why we had decided to immigrate to the United States. “For your and your dongseng’seducation,” he said, tousling my hair. One night, Abuji came home, Chivas on his breath, and he told me, “Today, you’re naturalized, an American citizen. So you will not grow up to be one of them,” he said. “Never serve in That Dictator’s army.”

I shook my head. “American,”I told the officer. Wordlessly, he stamped my passport, waved me through.

One day back in Seoul, I came home from school to see Abujistanding by a small fire in the backyard of our house. He was burning a bundle of clothes. I could make out his officer uniforms, once so crisp, now a wrinkled heap, throwing off black smoke. I saw the medals of honor glow, then burn in the embers. I knew Abuji’s job had been in the army, in intelligence. Through the smoke, I could make out tears running down his face. It was the first time I saw my father cry.

I made my way through the arrivals area, where there were not many people. There was no one to greet me.

“Home is where you start from,” Abuji said, when he came to see me off at Kennedy Airport. “Over twenty years since we left, but it’s still your gohyang.” His face looked suddenly aged, already weak from disease, but the light there still. The light of a will to struggle, against his illness, and time. “Just need to keep breathing,” he said, tapping his frail chest.

Outside, the morning fog rose, dissipated with the distant rumble of jets flying into the sky. On the Olympic Highway, the snow started to fall again, lightly, the thickening white carpet punctured by green bristles of rice plants.

The air felt heavy, as though weighed down with the burden of history. I felt the tiredness of the long flight. I rolled down the window in the taxi, and I saw snowflakes descend silent, and soft, and slow, Longfellow’s poem of the air, revealing the secret of despair, and I thought of the centuries of foreign invasions of Korea, the colonial occupation by Japan, the Korean War, pitting brother against brother, leaving two countries at war still, a people divided. The long Han River snaked along beside us. I imagined the spirits from the war roaming the hills of Namsan and the ghosts of the tortured dissidents haunting the Blue House, where Park Chung Hee launched the headlong prosperity drive that produced the Miracle on the Han. All the ghosts of the past. I felt light-headed, fatigue creeping over my body. The tenth-wealthiest nation in the world, now on the brink of a sovereign default. I closed my eyes and held my breath in. I waited for my consciousness to dissolve.

I was back home, where I started.
Michael ByungJu Kim

"A potent combination of a financial thriller and a coming-of-age immigrant tale, Offerings is a great book. A thoughtful and engrossing read."—Gary Shteyngart, award-winning and New York Times bestselling author of Lake Success

“Michael Kim writes with the authority of an insider on the intricate workings of Wall Street and the high stakes for Korea during the Asia Financial Crisis, but at its core Offerings is a moving love story—about a young man’s love for his home country, his father and his newfound soul mate. Offerings is an elegant poem on the redemptive power of love.”—Sandy Weill, chairman emeritus of Citigroup and bestselling author of The Real Deal: My Life in Business and Philanthropy

"In clean, elegantprose, Michael Kim plumbs the complicated world of international finance—and the universal longing of fathers and sons not to disappoint one another. Offerings is the engrossing tale of an immigrant's troubled return home."—Elizabeth Cobbs, New York Times bestselling author of The Hamilton Affair and The Tubman Command

"This is a brilliant novel about a critical turning point both in a man's life and in his country of origin. The author, who was born in South Korea but lived much of his childhood in New Jersey, writes with rare clarity and great authority about high finance, the concept of home, and, most importantly, lessons learned from and redemption achieved with a beloved father ."—Nick Lyons, professor of English, Hunter College (retired), and bestselling author

“If you want a look at a world you have never seen and appreciate rock-ribbed drama, then Offerings is that surprising item, a book that is at once new and fascinating.”—Craig Nova, author of  The Good Son