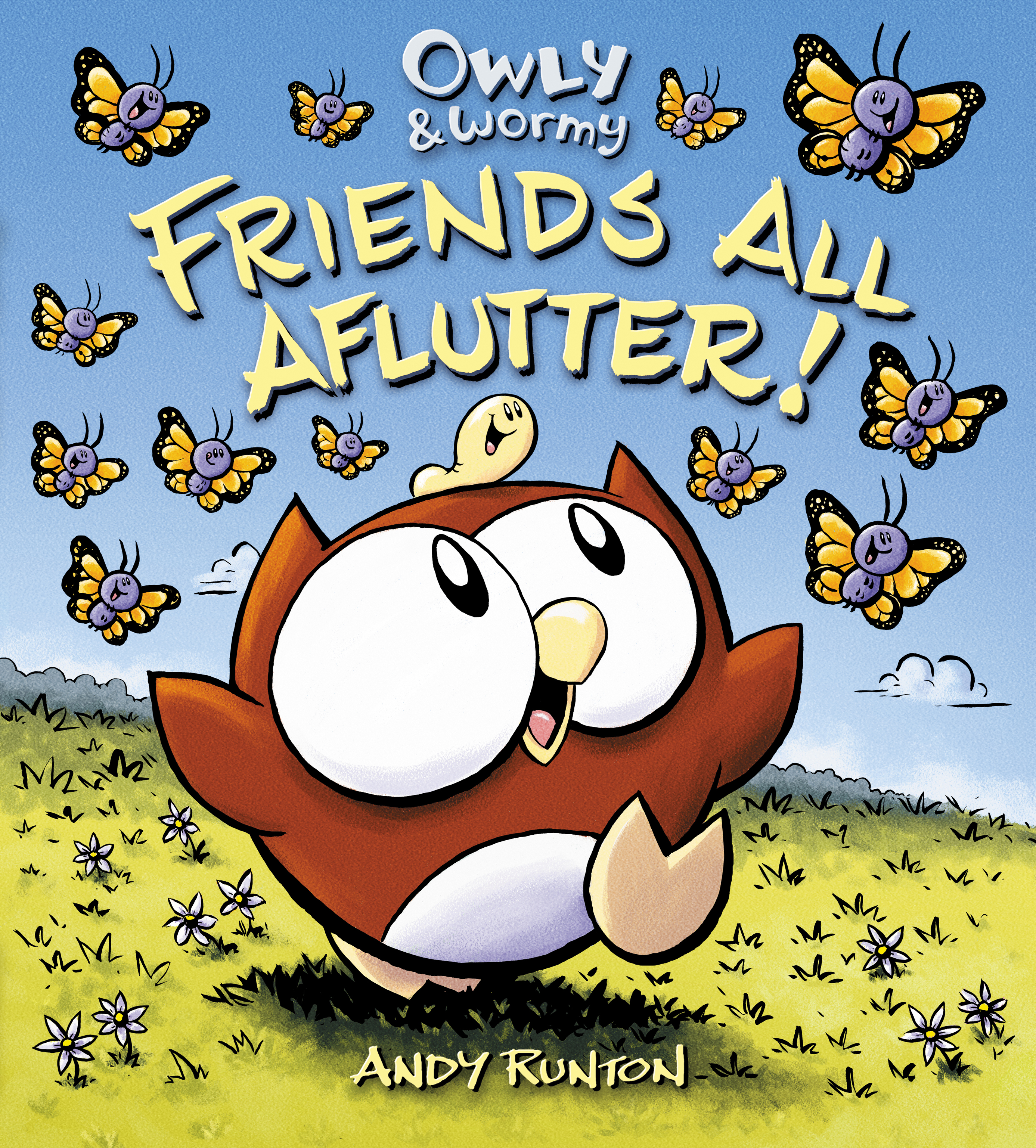 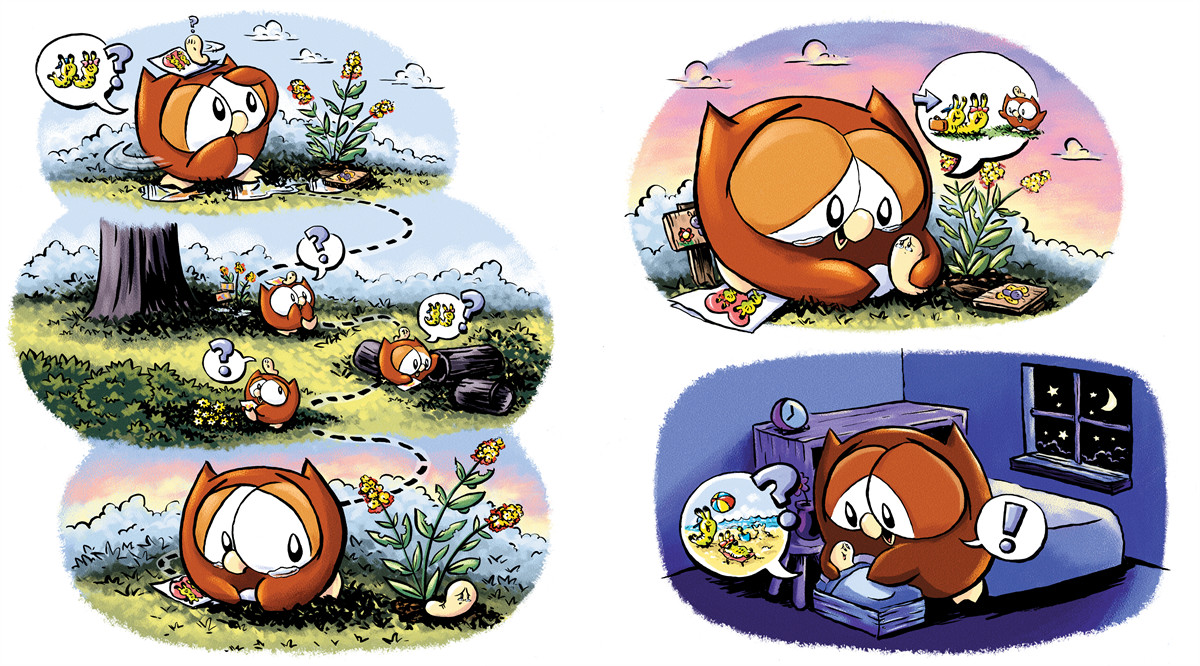 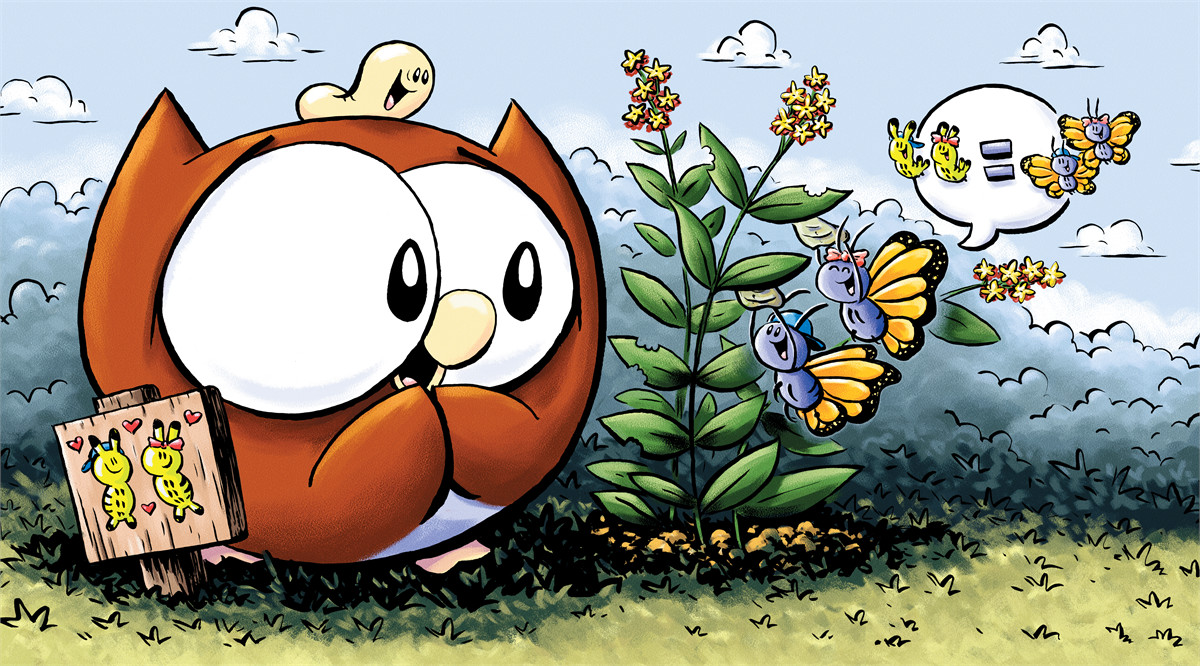 Owly and Wormy want some butterflies! But when they come home from the nursery with a plant that will attract some fluttering friends, all that show up are fat, green bug things. Bug things are NOT butterflies! But, they are nice and fun and good at sleep outs under the stars and always up for a game of checkers. Fat, green bug might even be better than butterflies! Let’s be friends forever! But, the bug things can’t stay. When the bugs build their cocoons, Owly and Wormy think they have no friends left at all. They wait. And wait. And wait. And one day…their dreams have come true…and all a flutter! Owly’s friends are back….AND they've turned into butterflies.

Bold, graphic and full of fun, this wordless storybook will give pre-reader the wings they need to start reading on their own, and a firm footing on the idea of metamorphosis. 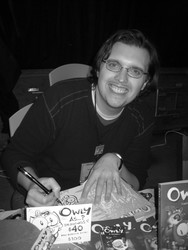 Andy Runton has always loved to draw. After college, he began a career in corporate America, but left when he decided to follow his heart (and love of comic books). He hasn’t looked back. Andy’s artwork portrays his affection for wildlife, especially little birds. He says he is happiest when he’s outside under a big Georgia sky. He lives in the greater-Atlanta area where he works full-time on Owly comics, books, and graphic novels. Visit him online at AndyRunton.com.

Andy Runton has always loved to draw. After college, he began a career in corporate America, but left when he decided to follow his heart (and love of comic books). He hasn’t looked back. Andy’s artwork portrays his affection for wildlife, especially little birds. He says he is happiest when he’s outside under a big Georgia sky. He lives in the greater-Atlanta area where he works full-time on Owly comics, books, and graphic novels. Visit him online at AndyRunton.com.

Graphic novelist Runton trades off page count for picture-book-bright hues and tones in his first all-color Owly story. (Owly has been appearing in his own eponymous graphic-novel series since 2004.) Related in large and easy-to-follow pictures, the wordless episode (helped by occasional exchanges in rebuses) pairs sweet-natured Owly and his vermiform sidekick with two caterpillars who appear on a milkweed plant, become good friends and playmates through a variety of weathers, mysteriously disappear for some weeks and then, in a joyful denouement, at last emerge as monarch butterflies. Owly’s simple emotional ups and downs register as clearly as ever—so does the sense of time’s slow passage—and the huge-eyed bird radiates appeal even more strongly here than in his previous appearances as a line-drawn figure. The author/illustrator’s customary warm humor pervades this wee story: Wormy, upon seeing the chewed milkweed leaves, “speaks” in a rebus that illustrates a sick-looking flower with a thermometer in its mouth; an idea that strikes Owly combines old convention with newfangled eco-consciousness with a curly florescent light bulb that hovers over his head. New format, new look, same “Aw, shucks” story, art and characters. - KIRKUS, February 1, 2011, *STAR

Owly and Wormy, Friends All Aflutter!
Andy Runton, S&S/Atheneum, $15.99 (40p) ISBN 978-1-4169-5774-4
Fans of Runton's series of graphic novels know about Owly and Wormy's warm friendship and Owly's love for all living things. In the duo's first picture book, Owly learns that in order to attract the butterflies he yearns for, he must plant milkweed in his garden; however, he and Wormy are disconcerted by the caterpillars that show up. Since there's no text, their heated discussion is portrayed through speech balloons containing miniature illustrations and energetic punctuation: "[picture of milkweed] = [picture of butterflies]!" Wormy protests. "[picture of milkweed] ? [picture of caterpillars]!" "[Milkweed] = home," a baseball-capped caterpillar explains tearfully. Owly is a round ball with enormous, expressive eyes and pointy ears; tiny, blobby Wormy often perches on his head. Runton's colors are unabashedly cheerful--lemony yellows, sky blues, and velvety purple for night scenes--and clever, rewarding touches abound (when Owly gets a brainstorm, it's an efficient compact fluorescent light bulb that appears). Even very young children will be able to puzzle out the story's details from the expressions on the characters' faces, and Runton's unvarnished sentimentality creates an atmosphere of absolute security. Ages 3–7.

Owly and Wormy, Friends All Aflutter!.

Mar 2011. 40 p. Atheneum, hardcover, $15.99. (9781416957744).
Wormy and Owly, the stars of Runton’s Owly comics, here make the leap into their first picture book.
Wormy is taken with a flock of passing butterflies, so the two ask a raccoon florist what kind of flower
they should plant to attract some. When the recommended flower becomes home to two little green
caterpillars, they’re a bit put off but soon take a shine to the critters. But then the caterpillars disappear
before they have a chance to say good-bye. As in the Owly comics, symbols and small pictures take the
place of words in the dialogue balloons (e.g., when the raccoon wishes the duo good luck by “saying ” a
four-leafed clover). The story’s midsection is perhaps a little too drawn out for a compact picture-book
read, and kids hip to where butterflies come from will easily predict the final twist. On the other hand, the
opportunity to decode the dialogue visuals will keep viewers engaged throughout this gently challenging
offering. The big cartoon illustrations? A blast!
— Ian Chipman
BOOKLIST, February 15, 2011