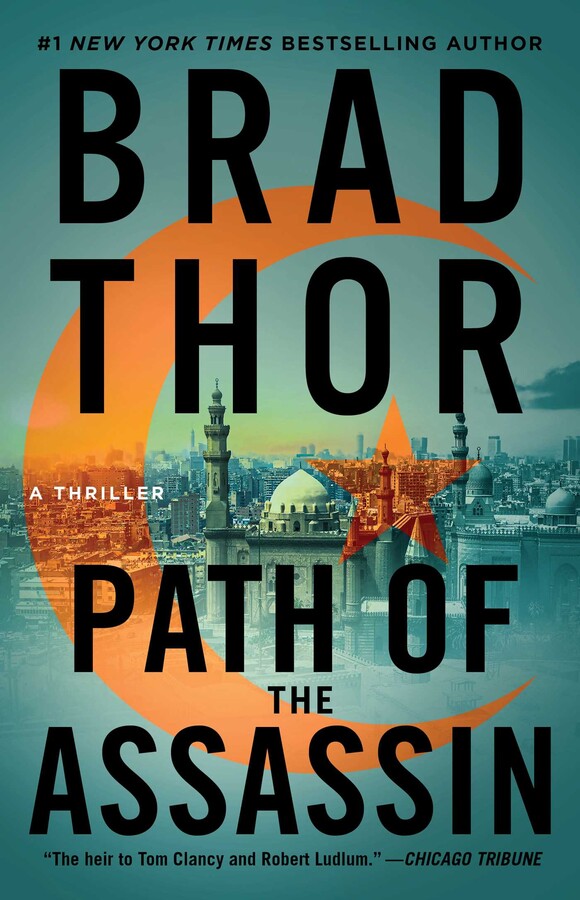 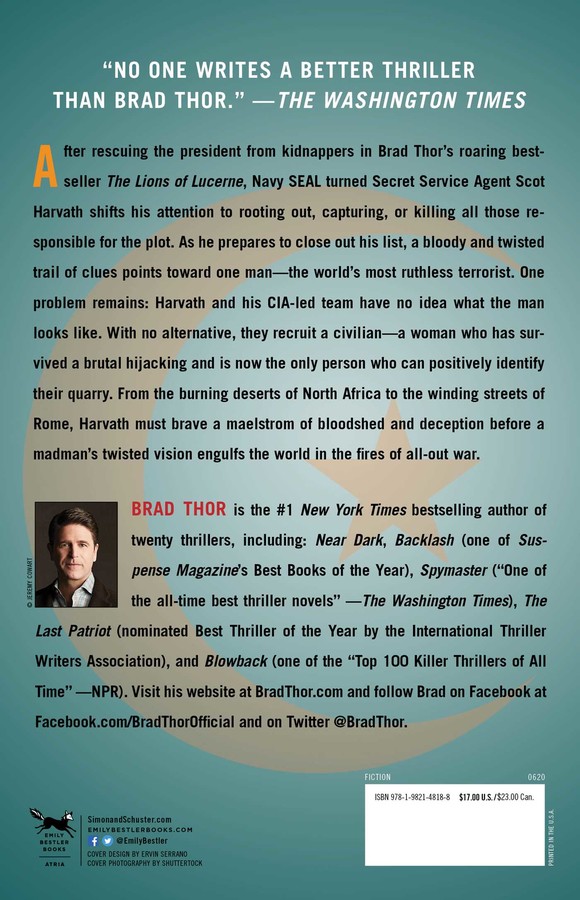 Path of the Assassin

The #1 New York Times bestselling author of the Scot Harvath series and “heir to Tom Clancy and Robert Ludlum” (Chicago Tribune) returns with this unputdownable, white-knuckled thriller following the Secret Service agent as he’s on the trail of the world’s most ruthless terrorist.

After rescuing the President from kidnappers in Thor’s roaring debut, The Lions of Lucerne, Secret Service agent Scot Harvath shifts his attentions to rooting out, capturing, or killing all those responsible for the plot. As he prepares to close out his list, a bloody and twisted trail of clues points toward one man—the world’s most dangerous terrorist.

Only one problem remains: Harvath and his CIA-led team have no idea what the man looks like. With no alternative, they are forced to recruit a civilian—a woman who has survived a brutal hijacking and is now the only person who can positively identify their quarry. From the burning deserts of North Africa to the winding streets of Rome, Harvath must brave a maelstrom of bloodshed and deception before the world is engulfed in flames.

Path of the Assassin
CHAPTER 1

Dressed in the traditional robes of a Muslim pilgrim, a lone figure tore back the carpeting from beneath a window of the sumptuously appointed room and fastened the feet of a tripod firmly into the concrete floor with a commercial-grade bolt gun.

The equipment had been smuggled into Saudi Arabia’s Dar Al Taqwa Inter-Continental Hotel via several large suitcases and a hard-shell golf club case. Arabs, even in Medina, loved their golf, after all, and no one had given any of the cases a second look.

Finally assembled and secured to its launching platform, the second-generation TOW 2 Short missile was something to behold. Though it retained the same three-foot ten-inch profile of the ones Israel had used during the 1973 Yom Kippur War, the effective range of the weapon had increased by almost a thousand yards, and was now the length of forty-one football fields—more than enough to deliver today’s deadly payload.

The missile’s optical sighting unit was securely positioned in the adjoining hotel room, and its crosshairs were fixed upon its target. An infrared sensor would track the weapon’s trajectory and progress, relaying any last-minute adjustments. At such close range though, there’d be no need for adjustments. It would be like shooting fish in a barrel.

The digital fuse was set for ten minutes into the night prayer session of the Prophet’s Mosque, the second-holiest shrine in Islam. Friday was the most important day of worship in the Muslim faith, and the evening prayer sessions were always the most heavily attended. The timing of the attack ensured maximum carnage. With a Do Not Disturb sign hung on the doors of both rooms, the terrorist would be resting comfortably on a first-class flight to Cairo by the time the missile launched. From Cairo, a clandestine transport network would round out the journey home just as today’s events were being broadcast on the evening news.

As the digital fuse began its devastating countdown, the terrorist spray-painted a large hand cradling the Star of David on the wall.

For a moment, scenes of a happier time flashed through the terrorist’s mind. A time before the hatred was so deeply entrenched. Two young lovers from different walks of life, two different sides of the struggle, walked together along a river in fall. Bells rang in the distance and they cherished the good fortune that had brought them together. Though each had been raised to hate the other, love had blossomed between them. But, there were influences at work greater than their love. It was those influences that would change their lives, and the world, forever.

The terrorist’s eyes, normally silver in color, now flashed coal black with hate as the final letters were painted beneath the hand. It was a simple, yet chilling three-word message, “Terror For Terror.”

Two hours later, a stream of worshippers hurried themselves along, late for the sunset prayer. As they entered the Prophet’s Mosque, right leg first as custom dictated, each supplicated, saying, “I seek refuge with the Mighty Allah. I seek protection in His Generous Countenance and His Everlasting Authority. . . . O Allah! Forgive my sins, and open the gates of Your mercy to me.”

They fanned out deeper into the mosque, searching for empty spaces to kneel among the other thousands of worshippers. As was the custom, the women were directed into a separate area closed off by large panels of fabric, so as not to distract the men from their prayers. The younger children stayed with their mothers, while older sons, well behaved enough not to disrupt the service, were allowed to sit among the rows of adult men. Most of the families in the Prophet’s Mosque were divided this way when a great rumbling erupted overhead and a massive double-detonating warhead crashed through the roof, exploding in a fiery hail of instant death.

By noon the next day, rescue workers were giving up any hope of finding victims alive beneath the wreckage of the Prophet’s Mosque. As throngs of Medina’s citizens gathered behind emergency-services barricades asking why, a broadcast fax went simultaneously to newspapers and news agencies around the globe. It read:

As it says in Job—“They that plow iniquity and sow mischief shall reap the same.”

The fax was signed on behalf of an organization calling itself the Hand of God. Beneath the group’s name was the same pictogram the Medina police found on the wall of room 611 of the Dar Al Taqwa Inter-Continental, a large hand holding the Star of David in its palm.

The operation had begun.

Brad Thor is the #1 New York Times bestselling author of twenty-one thrillers, including Near Dark (one of Suspense Magazine’s Best Books of the Year), Backlash (nominated for the Barry Award for Best Thriller of the Year), Spymaster (“One of the all-time best thriller novels” —The Washington Times), The Last Patriot (nominated Best Thriller of the Year by the International Thriller Writers association), and Blowback (one of the “Top 100 Killer Thrillers of All Time” —NPR). Visit his website at BradThor.com and follow him on Facebook at Facebook.com/BradThorOfficial and on Twitter @BradThor.

Path of the Assassin