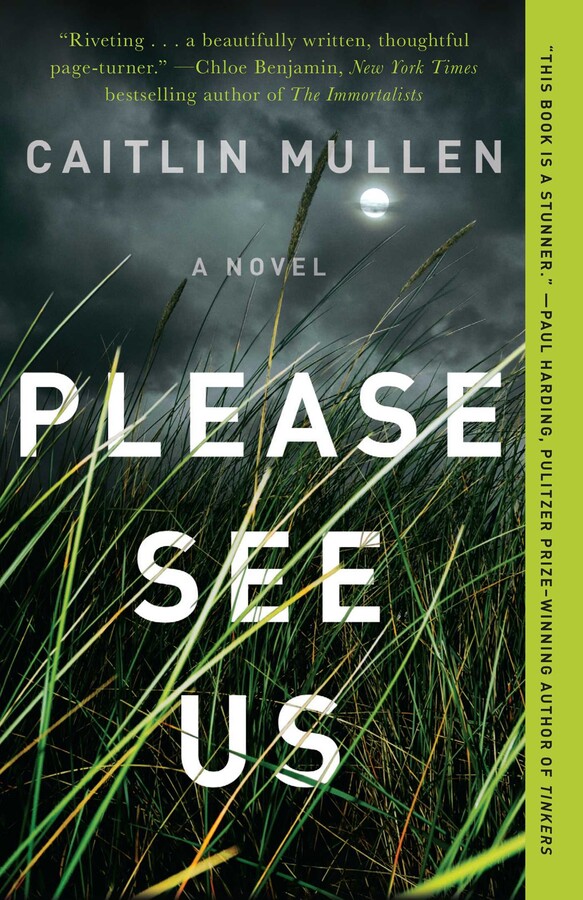 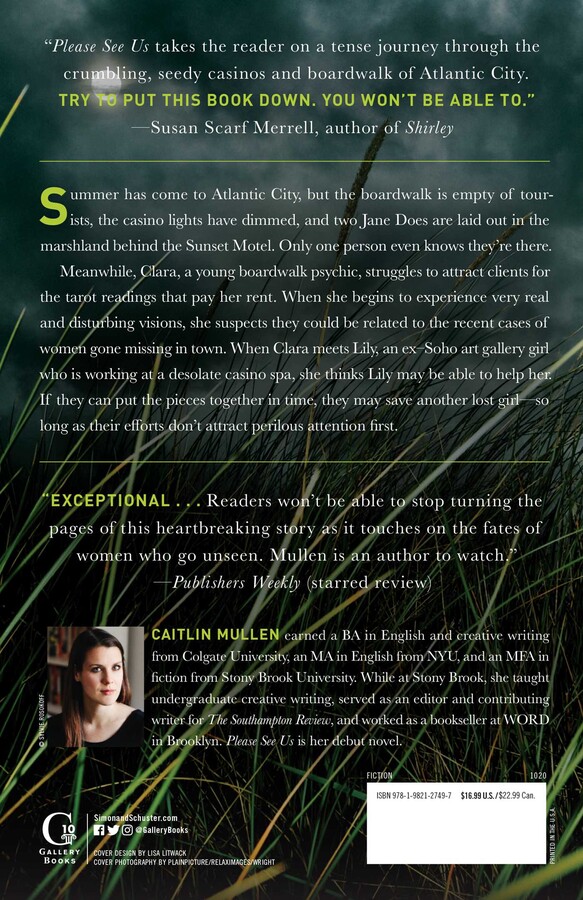 Winner of the 2021 Edgar Award for Best First Novel

Summer has come to Atlantic City but the boardwalk is empty of tourists, the casino lights have dimmed, and two Jane Does are laid out in the marshland behind the Sunset Motel, just west of town. Only one person even knows they’re there.

Meanwhile, Clara, a young boardwalk psychic, struggles to attract clients for the tarot readings that pay her rent. When she begins to experience very real and disturbing visions, she suspects they could be related to the recent cases of women gone missing in town. When Clara meets Lily, an ex-Soho art gallery girl who is working at a desolate casino spa and reeling from a personal tragedy, she thinks Lily may be able to help her. But Lily has her own demons to face.

If they can put the pieces together in time, they may save another lost girl—so long as their efforts don’t attract perilous attention first. Can they break the ill-fated cycle, or will they join the other victims?

A “beautifully written, thoughtful page-turner” (Chloe Benjamin, New York Times bestselling author of The Immortalists), Please See Us is an evocative and compelling psychological thriller that explores the intersection of womanhood, power, and violence.

Prologue PROLOGUE
BY THE SECOND WEEK IN June, there are two dead women laid out like tallies in the stretch of marsh just behind the Sunset Motel. They are so close to each other that their fingers nearly touch. The women can see everything with perfect clarity now, the man’s entire design available to them as though they had thought of it themselves: by the end of eight weeks’ time there will be five more women. He plans to use the city’s symbols against it. Seven women, seven warnings. Not so lucky after all.

The motel sits on the western border of Atlantic City, where stretches of salt marsh buffer the space between land and ocean. Casinos line the shores on the eastern edge of town, along the boardwalk, and to the north, where pleasure boats slip in and out of the marina or dock long enough for a bottle of wine, a bit of sun, a swim. At night the skyline is gapped, like a child’s smile: half of the casinos have shut down and their lights are turned out. The empty buildings hulk against the shoreline, mammoth and spectral as shipwrecked cruise liners.

In death, the women are still dressed to walk the streets. To attract clients with a slice of leg, cleavage. To mime desire with a cant of the hips, a toss of their hair. Dressed to be undressed. Their jewelry glints in the sun: gold hoop earrings and the delicate chains of ankle bracelets. Charms in the shape of four-leaf clovers, a pair of cherries, a cat’s head. A stack of cheap metal bangles, the gilt coming off in tiny flakes. There is longing in the way their hands seem to reach toward one another, the aching almost of it. Bruises bloom on the skin of their arms, delicate blues and greens that could have been painted with watercolor. Except for their necks, which are marked with purple rings. The water seething in and out with the tide means they won’t be preserved for long. Already dense, iridescent clumps of greenhead flies tickle along their limbs, their cheeks, their scalps; the flies’ thick, segmented wings like stained glass.

Each day brings a new hope that someone will find them. Planes fly banners over the beach, advertising Corona. The pilots loop back over the marsh but never look down. Other days an employee from the motel rattles a bag of recycling to the dumpster. Some nights a couple stops in the motel’s parking lot to fuck in the back seat of a rusted-out Ford Explorer. The car rocks on its frame for a little while, and after it goes still the man ambles out to light a joint. Sometimes the woman squats on the edge of the marsh to piss behind the cover of the reeds. The women call to her, the shush of the wind through the grass like a whisper. Look, they try to say. Look. Look. Please see.

Cars and buses thrum past on the Black Horse Pike, trucks delivering cuts of filet mignon and rib eye to the casino steak houses, or vans of fresh laundry for the hotels: sheets and pillowcases that have been boiled clean, napkins and tablecloths stiff with starch. At one point or another the women in the marsh have wished for that kind of a cleansing, a way to scald their secrets away, their pasts swirled down the drain.

The man has turned their heads so they both look in the same direction: east, toward the lights of Atlantic City. They have been placed there to watch, to warn. Their eyes are open. They wait. 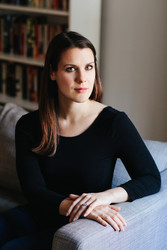 Caitlin Mullen earned a BA in English and creative writing from Colgate University, an MA in English from NYU, and an MFA in fiction from Stony Brook University. While at Stony Brook, she taught undergraduate creative writing, served as an editor and contributing writer for The Southampton Review, and worked as a bookseller at WORD in Greenpoint. She grew up in upstate New York and the Jersey Shore and currently lives in Brooklyn. Please See Us is her debut novel.

“I love this book for Caitlin Mullen’s authorial voice—wise beyond its years, with something to say about women, men, and society. The points of view in Please See Us have stuck with me long after turning the last page.” —Kate D., Senior Editor, on Please See Us

"Please See Us is riveting, the rare book that unpacks and deplores violence against women even as it depicts it. In Caitlin Mullen’s hands, everyone has a voice, and the dead speak as loudly as the living. Please See Us is a beautifully written, thoughtful page-turner, as well as a tribute to the women— not just victims, but full human beings—who so frequently go unseen."

"Please See Us is so good I don’t even know where to start – it’s brilliant and it’s dark; it’s heartbreaking and it’s defiant; it’s a riveting thriller and it’s a literary gem. Here are true, beautiful portraits of girls and women whose lives might well otherwise pass by without notice, without proper human value. Caitlin Mullen brings us those lives magnificently– with subtlety, compassion, and utter dignity. This book is a stunner."

“A dark literary thriller about women who slip through the cracks. Disturbing, powerful, important.”

"Kudos to Caitlin Mullen, the next big voice in crime fiction, on this gripping, innovative and finely written thriller. Please See Us takes the reader on a tense journey through the crumbling, seedy casinos and boardwalk of Atlantic City. Try to put this book down. You won’t be able to."

"Exceptional… Readers won’t be able to stop turning the pages of this heartbreaking story as it touches on prostitution, drug abuse, and the fates of women who go unseen. Mullen is definitely an author to watch.”

"At last, a 'woman in peril' thriller that doesn’t involve a handsome, psychopathic husband. What Mullen’s debut gives readers is a wrenchingly detailed, utterly credible story of women whose peril comes from poverty, either a slow slide or a sudden slip. Brilliant [...] Mullen builds almost unbearable suspense."

“A dark, gritty, and cathartic debut with well-developed characters and a compelling plot that will appeal to fans of Attica Locke, Lou Berney, and Jennifer Hillier.”

"Confronting us with the darkest part of the city, Mullen beckons readers not only to see the women she writes about, but to really look at them and their stories. She writes with an unflinching eye... [her] prose is so beautifully rendered and her pace so careful that you almost forget there is a mystery at the book’s core. Mullen is a bright new talent, and I was constantly in awe of the fact that this is her debut; she is so skilled and so cadenced, with every word chosen with the care of a poet. I foresee a long career for her, and I cannot wait to find out where she turns her literary eye next."

"The voices of the dead tell the unhappy story of Please See Us, Caitlin Mullen’s spellbinding debut novel about a series of murders in Atlantic City."

“Finally, the Atlantic City mystery we’ve all been waiting for!”