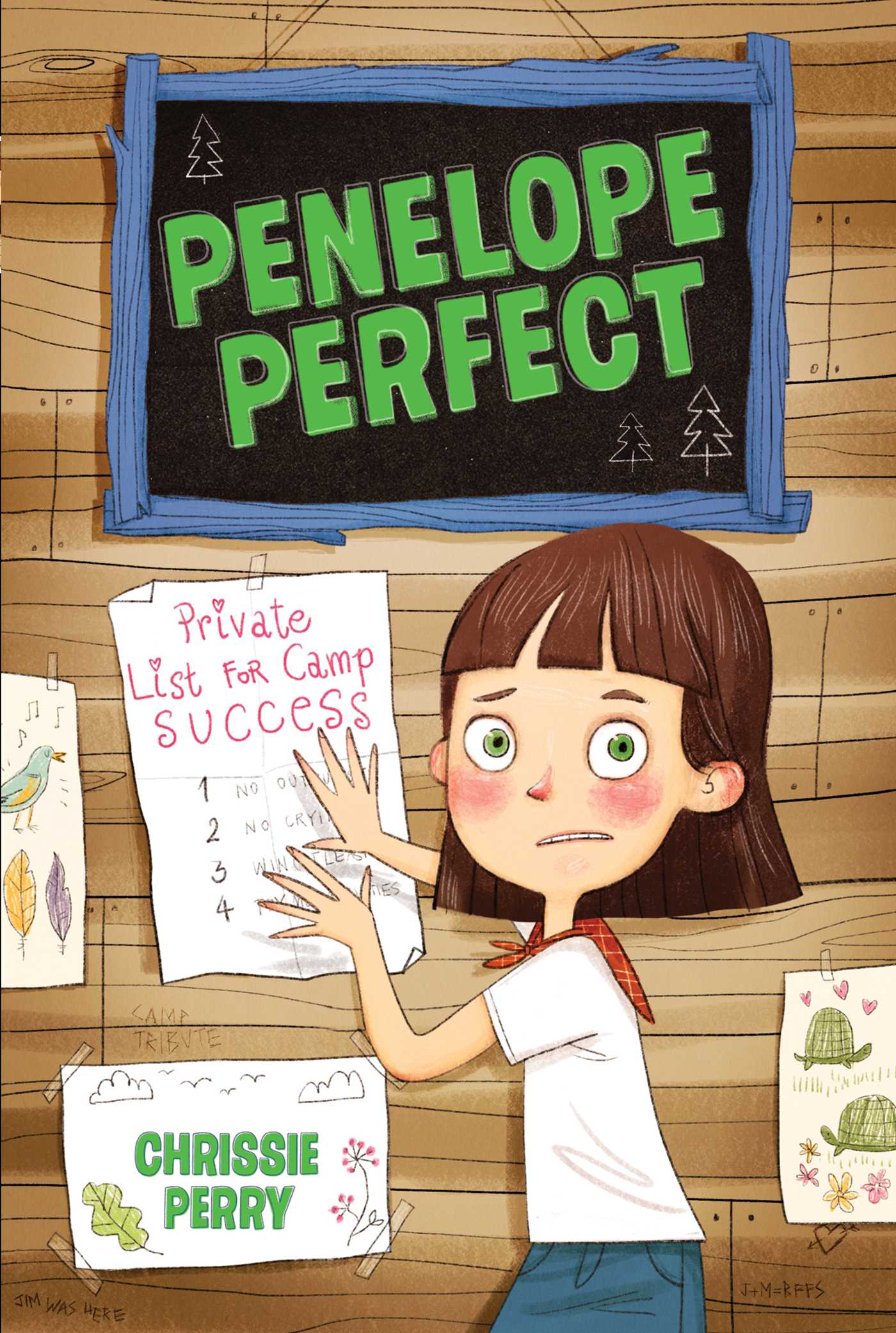 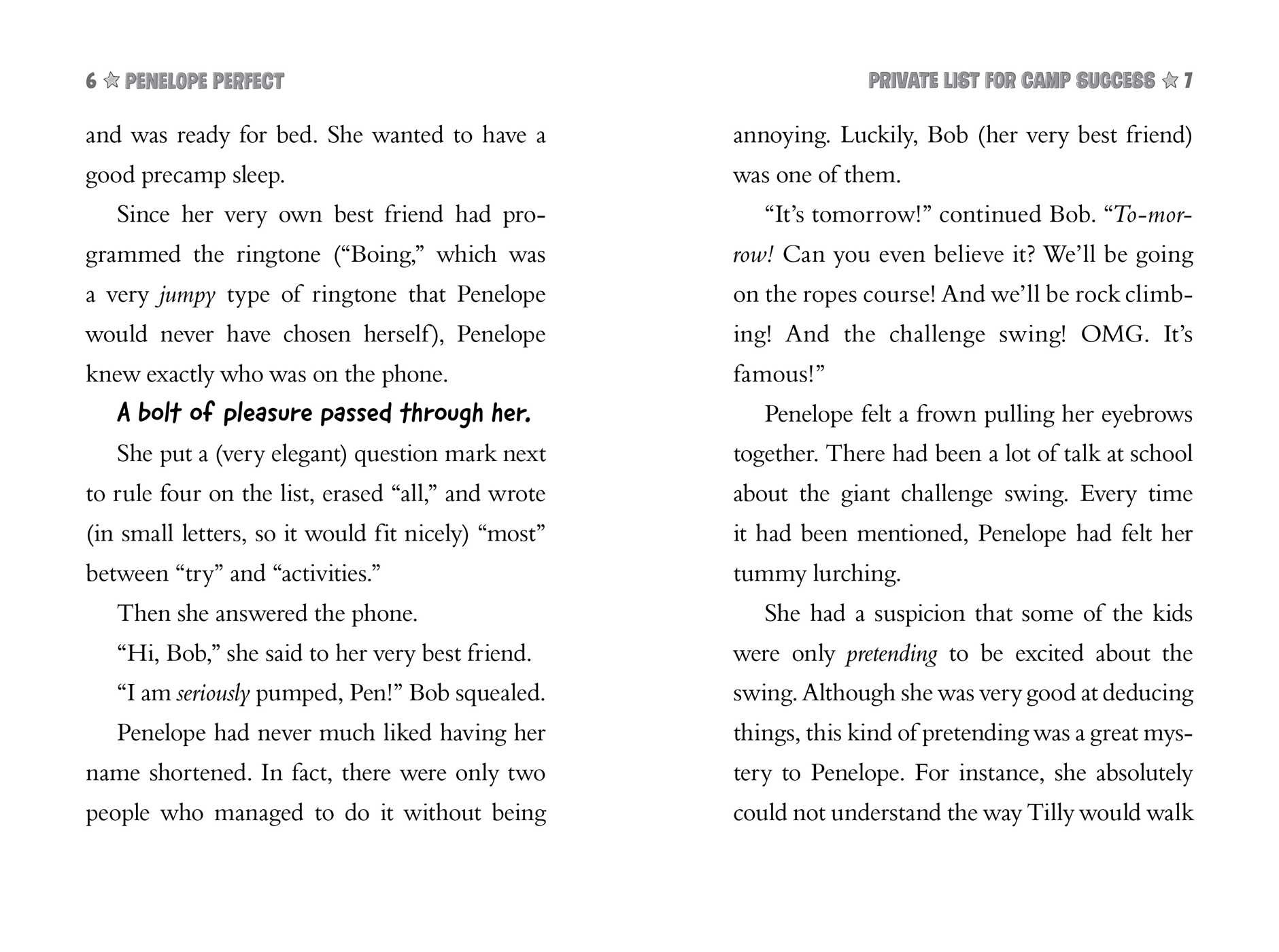 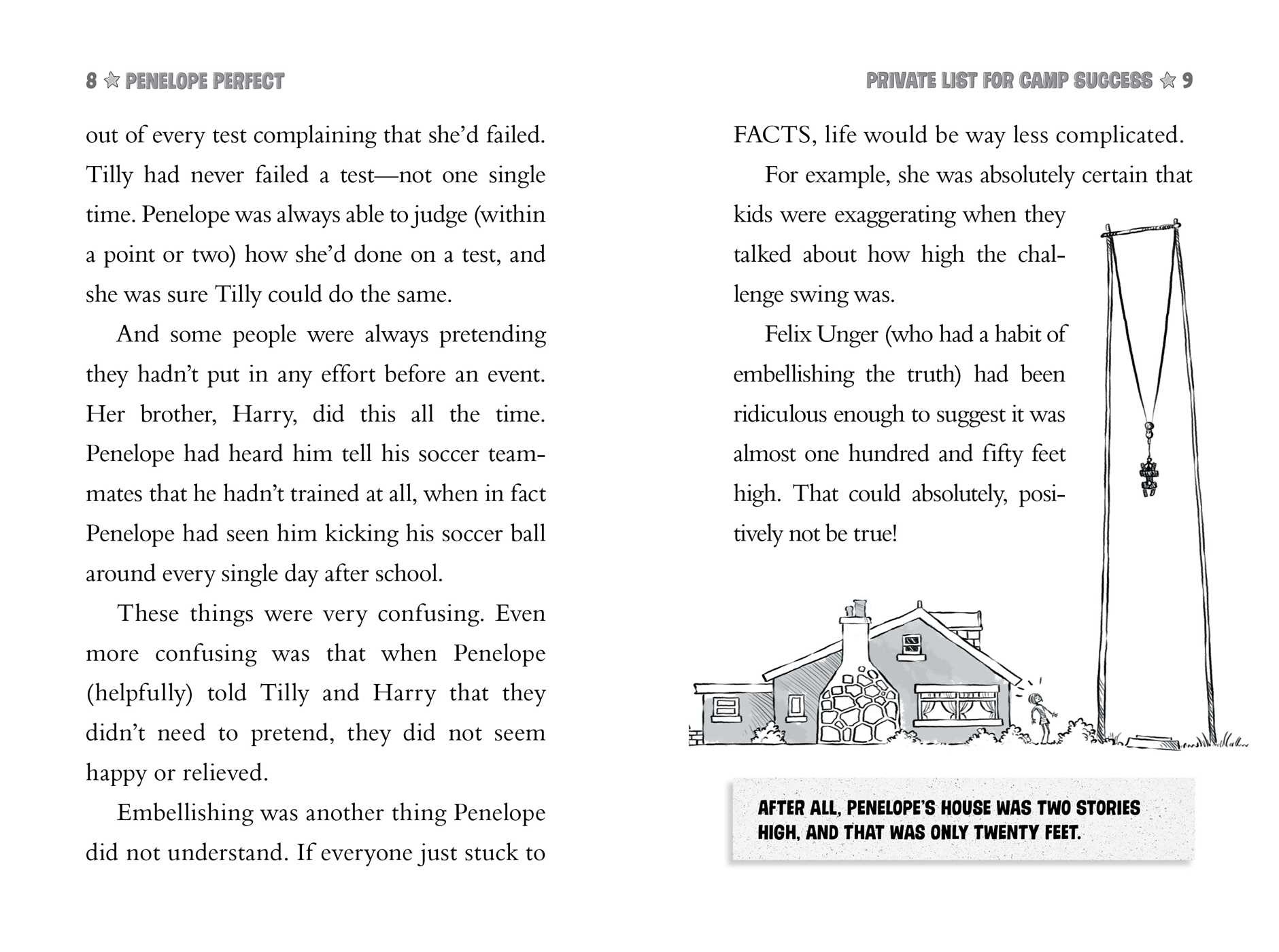 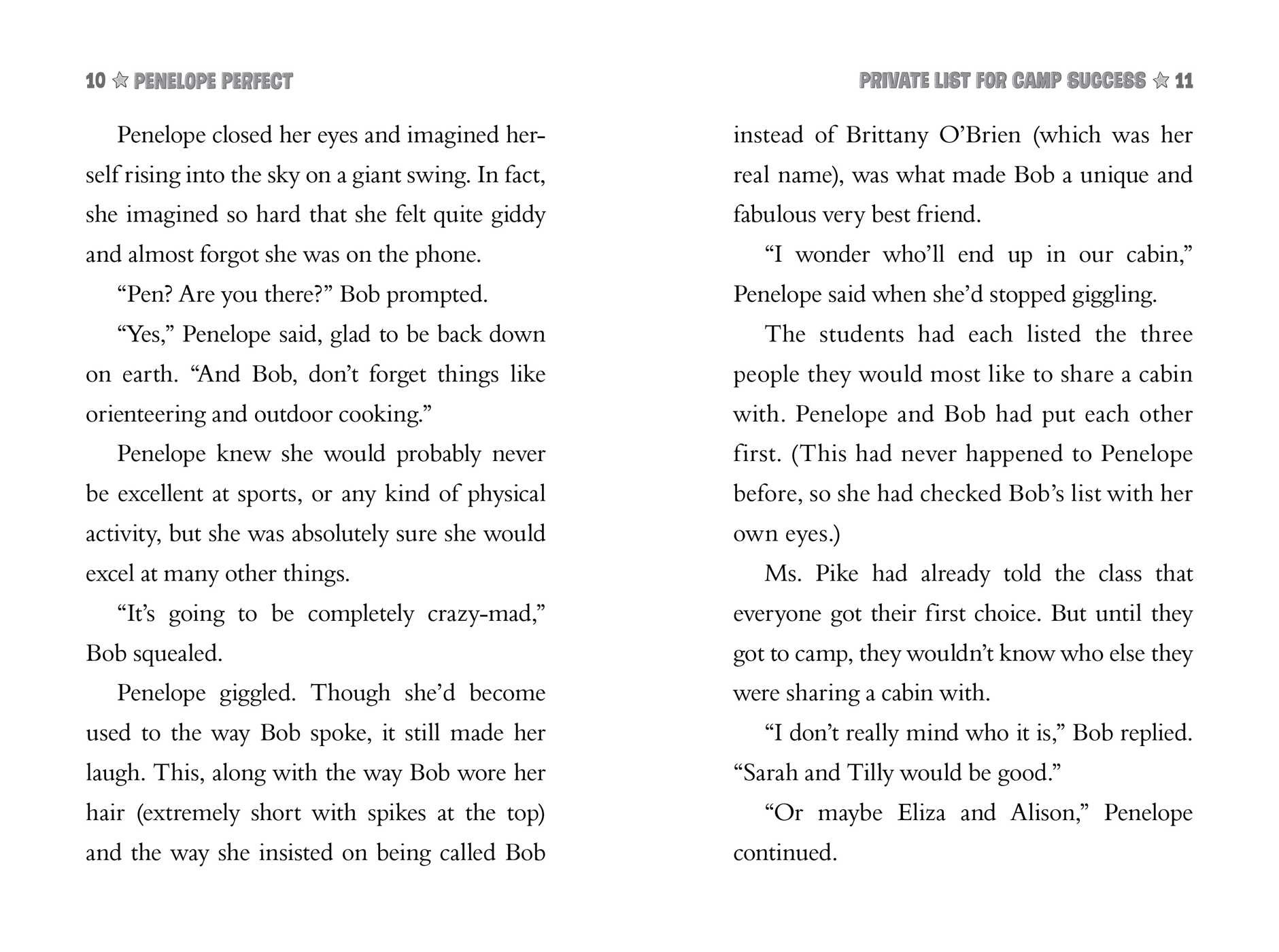 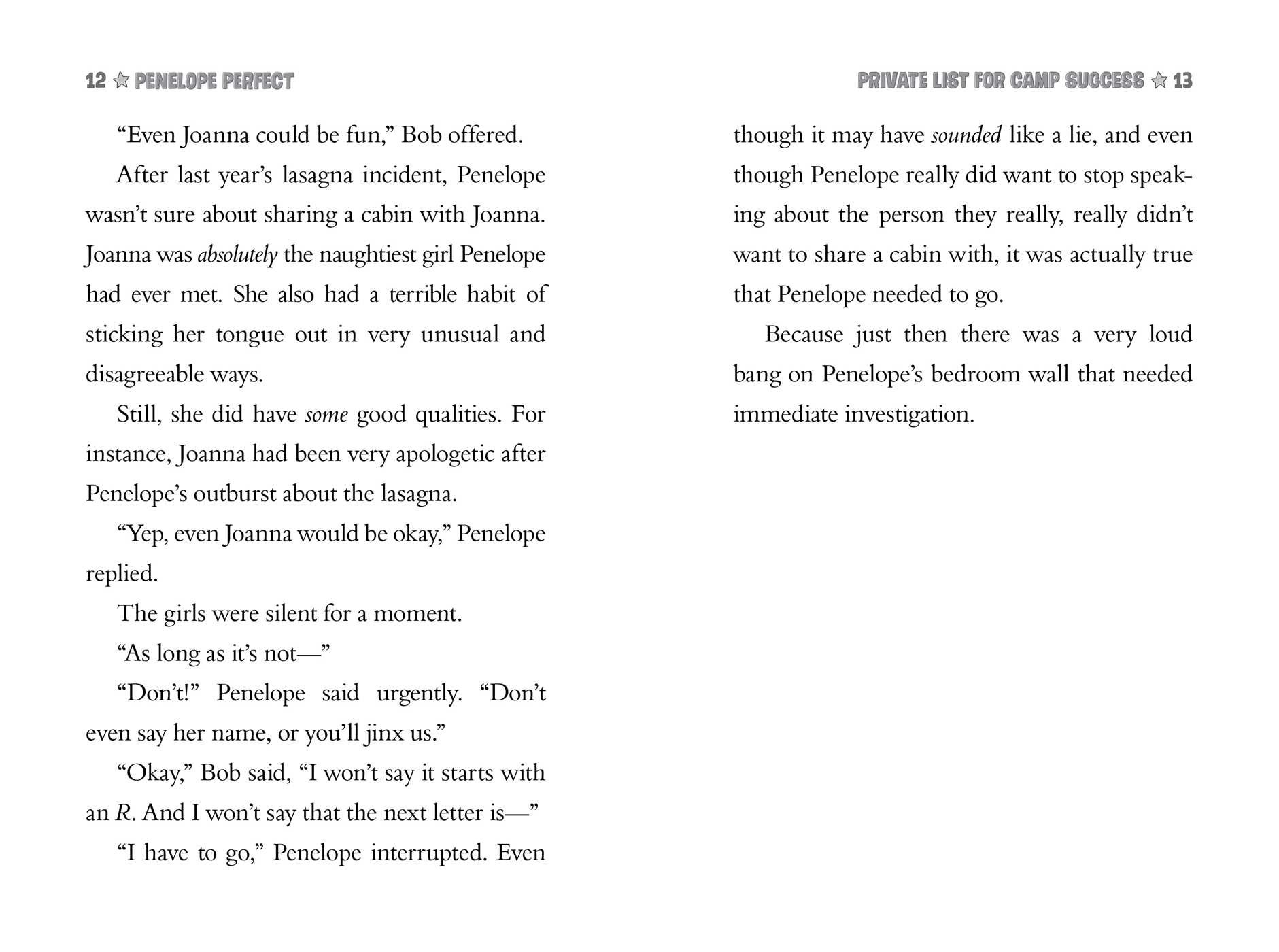 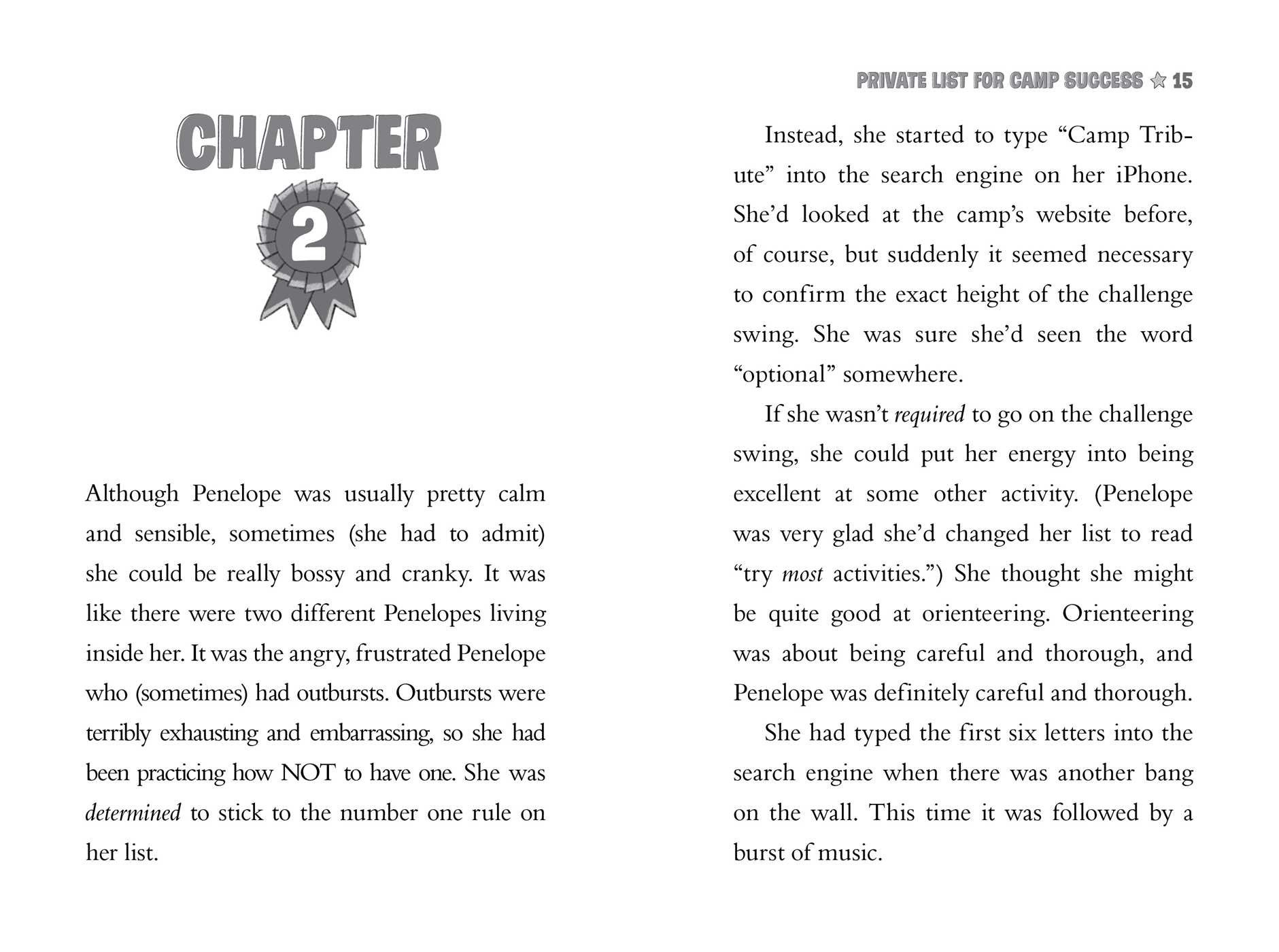 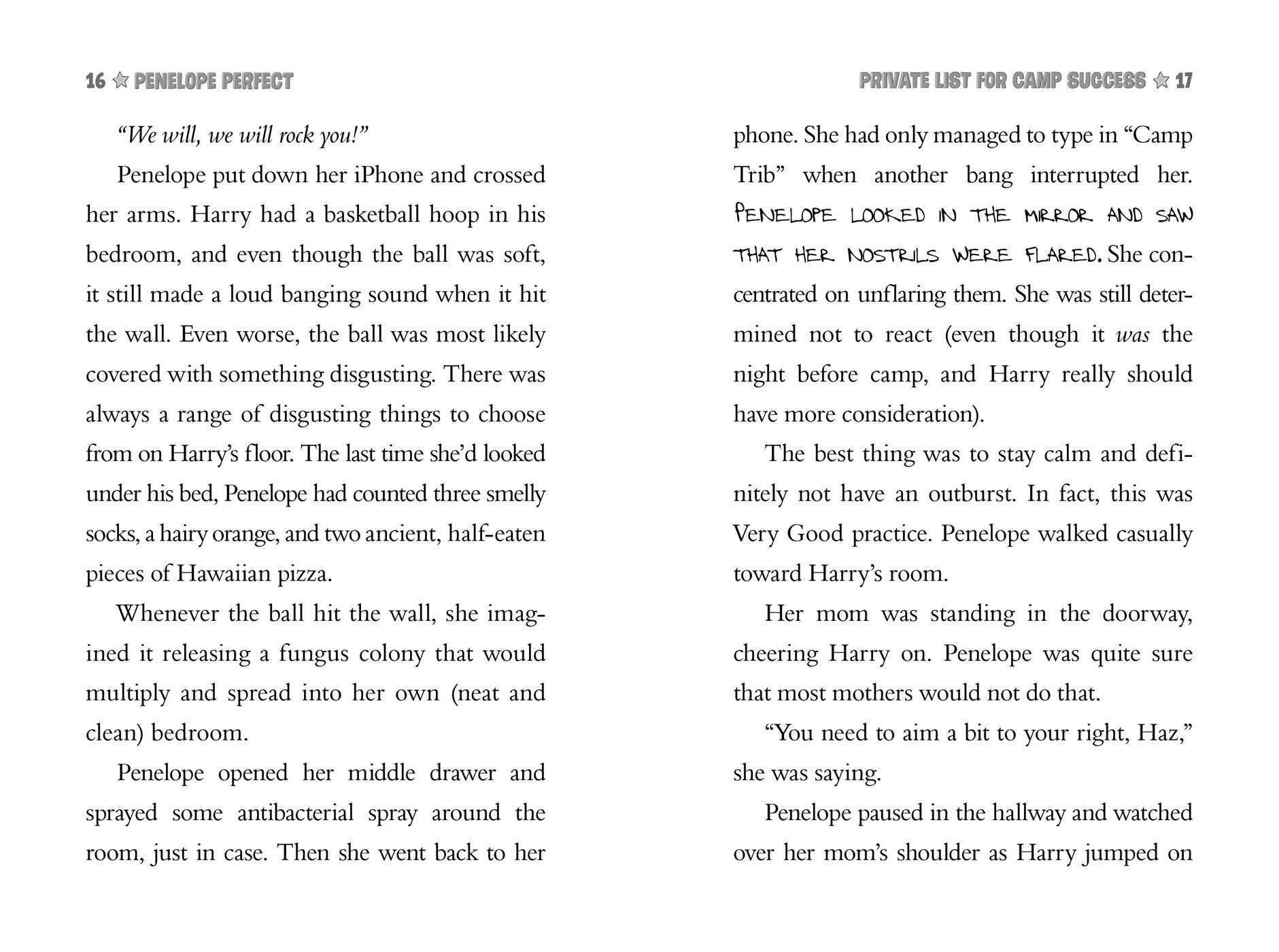 Penelope Kingston goes on a camping trip with her classmates in the second book in the charming new Penelope Perfect chapter book series.

Penelope Kingston is determined not to feel anxious about going on a school camping trip. On last year’s trip, Penelope cried (only tears, not sobs) when a teacher made them climb a ridiculously steep and frightening hill. Penelope would never forgive herself if she did that again.

To make sure she has a practically perfect time this year, Penelope has written a (very private) list of rules. And what’s rule number one? No crying.

Penelope is a whole year older now. And (more importantly) she now has her very own best friend to bunk with. Will this camping trip be the perfect weekend she’s expecting?


Penelope Kingston knew that you were supposed to feel excited about going on a school camping trip. So Penelope was determined not to feel anxious. But sometimes she found it hard to tell the difference between feeling excited and feeling anxious. In fact, one moment she could feel excited, and then the very next moment, WHAM! She was worried and nervous all over again.

Penelope had been using some calming techniques in the lead-up to the trip. She reminded herself that she had been on sleepovers before. Not as many as most other girls, but she had slept in Grandpa George’s spare room lots of times. And she had gone to Tilly’s slumber party back in first grade and been perfectly fine.

Plus, she had been to camp last year.

But thinking about last year’s camp was not very helpful. In fact, it made Penelope’s cheeks flush and her heart beat very fast. Unfortunately, last year’s camp had not been perfect. Mr. Joseph had made them all climb a very steep and frightening hill.

PENELOPE HAD CRIED (ONLY TEARS, NOT SOBS).

She’d also had an outburst when she discovered that Joanna (the naughtiest girl in the class) had put lasagna in the bottom of Penelope’s sleeping bag.

This time, things were going to be different. Completely different. After all, she was a whole year older. Even though (annoyingly) she had only grown an inch, and was still the smallest in her class, Penelope was definitely more mature on the inside.

AND (MORE IMPORTANTLY) THIS TIME, SHE WOULD HAVE HER VERY OWN BEST FRIEND TO SIT NEXT TO ON THE BUS AND SHARE A CABIN WITH.

Penelope was determined not to cry this year. And she was absolutely not going to have an outburst.

If she had an outburst at Camp Tribute, Penelope would never forgive herself.

Penelope unzipped the secret pocket of her duffel bag, which she had carefully packed. She pulled out her Private List. It was just a short list, and she knew it by heart. But she felt quite sure that having it in her bag, and knowing that she could sneak a look at it whenever she wanted, would be helpful.

Penelope was quite sure about the first three rules. Since she first wrote the list (six days ago, when she’d packed her bag), she hadn’t changed her mind about them one little bit.

She was less sure about the fourth rule, however. At last year’s camp, when Penelope had (eventually) reached the top of that very steep hill, the fact that she had cried (only tears, not sobs) on the way up suddenly didn’t seem so terrible. Penelope was just amazed she had actually done it. But this year’s camp was famous for its activities. And they looked way more frightening than climbing up a (ridiculously) steep hill.

Penelope was just debating whether to erase “all” in rule four of her list (which would leave a funny space), or to simply put a question mark at the end, when her phone rang. It was only eight p.m., but Penelope had already showered and was ready for bed. She wanted to have a good precamp sleep.

Since her very own best friend had programmed the ringtone (“Boing,” which was a very jumpy type of ringtone that Penelope would never have chosen herself), Penelope knew exactly who was on the phone.

A bolt of pleasure passed through her.

She put a (very elegant) question mark next to rule four on the list, erased “all,” and wrote (in small letters, so it would fit nicely) “most” between “try” and “activities.”

Then she answered the phone.

“Hi, Bob,” she said to her very best friend.

Penelope had never much liked having her name shortened. In fact, there were only two people who managed to do it without being annoying. Luckily, Bob (her very best friend) was one of them.

“It’s tomorrow!” continued Bob. “To-mor-row! Can you even believe it? We’ll be going on the ropes course! And we’ll be rock climbing! And the challenge swing! OMG. It’s famous!”

Penelope felt a frown pulling her eyebrows together. There had been a lot of talk at school about the giant challenge swing. Every time it had been mentioned, Penelope had felt her tummy lurching.

She had a suspicion that some of the kids were only pretending to be excited about the swing. Although she was very good at deducing things, this kind of pretending was a great mystery to Penelope. For instance, she absolutely could not understand the way Tilly would walk out of every test complaining that she’d failed. Tilly had never failed a test—not one single time. Penelope was always able to judge (within a point or two) how she’d done on a test, and she was sure Tilly could do the same.

And some people were always pretending they hadn’t put in any effort before an event. Her brother, Harry, did this all the time. Penelope had heard him tell his soccer teammates that he hadn’t trained at all, when in fact Penelope had seen him kicking his soccer ball around every single day after school.

These things were very confusing. Even more confusing was that when Penelope (helpfully) told Tilly and Harry that they didn’t need to pretend, they did not seem happy or relieved.

Embellishing was another thing Penelope did not understand. If everyone just stuck to FACTS, life would be way less complicated.

For example, she was absolutely certain that kids were exaggerating when they talked about how high the challenge swing was.

Felix Unger (who had a habit of embellishing the truth) had been ridiculous enough to suggest it was almost one hundred and fifty feet high. That could absolutely, positively not be true!

AFTER ALL, PENELOPE’S HOUSE WAS TWO STORIES HIGH, AND THAT WAS ONLY TWENTY FEET.

Penelope closed her eyes and imagined herself rising into the sky on a giant swing. In fact, she imagined so hard that she felt quite giddy and almost forgot she was on the phone.

“Pen? Are you there?” Bob prompted.

“Yes,” Penelope said, glad to be back down on earth. “And Bob, don’t forget things like orienteering and outdoor cooking.”

Penelope knew she would probably never be excellent at sports, or any kind of physical activity, but she was absolutely sure she would excel at many other things.

Penelope giggled. Though she’d become used to the way Bob spoke, it still made her laugh. This, along with the way Bob wore her hair (extremely short with spikes at the top) and the way she insisted on being called Bob instead of Brittany O’Brien (which was her real name), was what made Bob a unique and fabulous very best friend.

“I wonder who’ll end up in our cabin,” Penelope said when she’d stopped giggling.

The students had each listed the three people they would most like to share a cabin with. Penelope and Bob had put each other first. (This had never happened to Penelope before, so she had checked Bob’s list with her own eyes.)

Ms. Pike had already told the class that everyone got their first choice. But until they got to camp, they wouldn’t know who else they were sharing a cabin with.

“I don’t really mind who it is,” Bob replied. “Sarah and Tilly would be good.”

“Even Joanna could be fun,” Bob offered.

After last year’s lasagna incident, Penelope wasn’t sure about sharing a cabin with Joanna. Joanna was absolutely the naughtiest girl Penelope had ever met. She also had a terrible habit of sticking her tongue out in very unusual and disagreeable ways.

Still, she did have some good qualities. For instance, Joanna had been very apologetic after Penelope’s outburst about the lasagna.

“Yep, even Joanna would be okay,” Penelope replied.

The girls were silent for a moment.

“Don’t!” Penelope said urgently. “Don’t even say her name, or you’ll jinx us.”

“I have to go,” Penelope interrupted. Even though it may have sounded like a lie, and even though Penelope really did want to stop speaking about the person they really, really didn’t want to share a cabin with, it was actually true that Penelope needed to go.

Because just then there was a very loud bang on Penelope’s bedroom wall that needed immediate investigation.
Chrissie Perry

Chrissie Perry is the author of over thirty books for children and young adults, including thirteen books in the popular Go Girl series, the award-winning Whisper, and the Penelope Perfect series. She lives in St. Kilda with her husband, three children. Like Penelope Kingston, Chrissie believes it’s great to aim for excellence. But she also has a sneaking suspicion that going with the flow every now and then can also work out just fine.