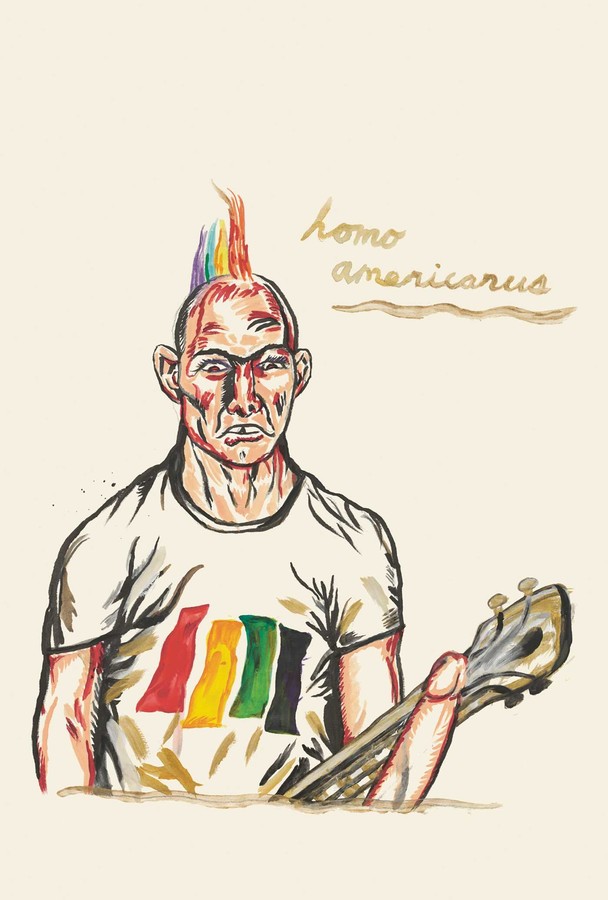 Published on the occasion of his major European traveling retrospective at the Deichtorhallen Hamburg – Sammlung Falckenberg, Raymond Pettibon: Homo Americanus presents over six hundred works from every part of the artist’s career, the majority of which have never been shown before.

Philosophically profound, deeply literary and biting in his satire, Raymond Pettibon is the foremost draftsman of his generation, and one of America’s most important contemporary artists. Approaching “high” and “low” subject matter with equal appetite and comfort, Pettibon plumbs the depths of American sexuality, politics, subcultures, mores, and intellectual histories through themes ranging from Shakespeare to Gumby, surfers to the Bible, baseball to German Romanticism.

Arranged thematically in thirty-two chapters, Raymond Pettibon: Homo Americanus charts the appearance and development of the themes that have come to define Pettibon’s expansive oeuvre. Different sections are introduced with excerpts from interviews conducted with the artist, and are further discussed in a detailed appendix by curator Ulrich Loock. Beyond shedding valuable light on the genesis and cross-pollination of Pettibon’s thematic interests, this catalogue is the first to tackle the artist’s work as a whole—as a kind of hive mind of American culture whose various branches constantly address and reinterpret one another. Of particular interest are Pettibon’s own readings of individual works in the book. In excerpts paired with corresponding images, Pettibon guides readers through his complex, often meandering turns of thought; never condescending, they invite readers to enter more deeply into his thinking without sacrificing the intellectual rigor and sense of mystery that makes Pettibon’s work so compelling and challenging. The book includes a complete facsimile of his first artists’ book, Captive Chains—almost entirely unavailable for decades—in addition to numerous early drawings completed with his nephew, record covers, flyers, and sections dedicated to collages and drawings from the 1980s to today. Also featured are biographical notes compiled by Lucas Zwirner, offering a nuanced, insightful reading of Pettibon’s history, whose early life and work is often simplified and categorically tied to punk rock, and instead underscores the complexities surrounding the artist’s long-standing relationship with art, literature, and American culture. This unparalleled selection of Pettibon’s work is the definitive single volume for novices and experts alike.

“People who buy Homo Americanus are in for a particularly excellent treat —but the real surprise is that even Pettibon’s biggest fans are in for a new education, too. The undeniably coolest and most unique element —the treat —is the inspired inclusion of a pulp-paper facsimile introducing the volume with the entirety of Pettibon’s first zine.”

“Philosophically profound, deeply literary and biting in his satire, Raymond Pettibon is the foremost draftsman of his generation, and one of America’s most important contemporary artists.”

“Chances are, your bookshelf is already well acquainted with the seminal SoCal artist: Pettibon has published at least 15 collections over the course of his career. But the prolific punk's work has actually never been explored as a whole — until now.”

“Seeing all this ambitious, restlessly self-interrogating work brought together in one place impresses viewers with how diligently Pettibon keeps his grimly witty mastery of word and image from descending into all-out nihilism.”

“With his sights firmly set on sex, death, violence and war, Pettibon has spent his career  revealing America’s dark underbelly. Returning to the same themes over and over again, he expresses his frustration with politics, religion and violence with gallows humour."