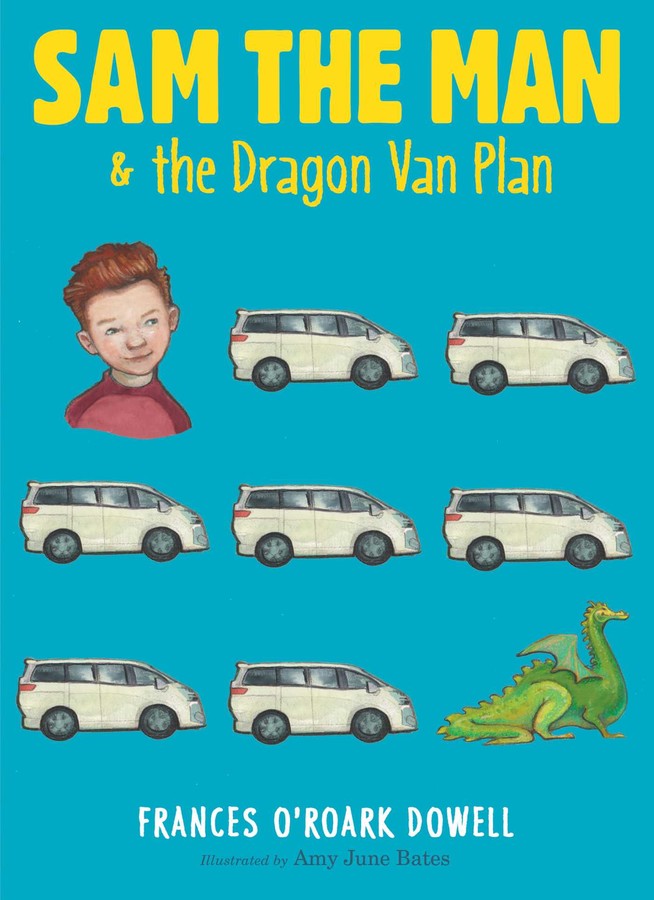 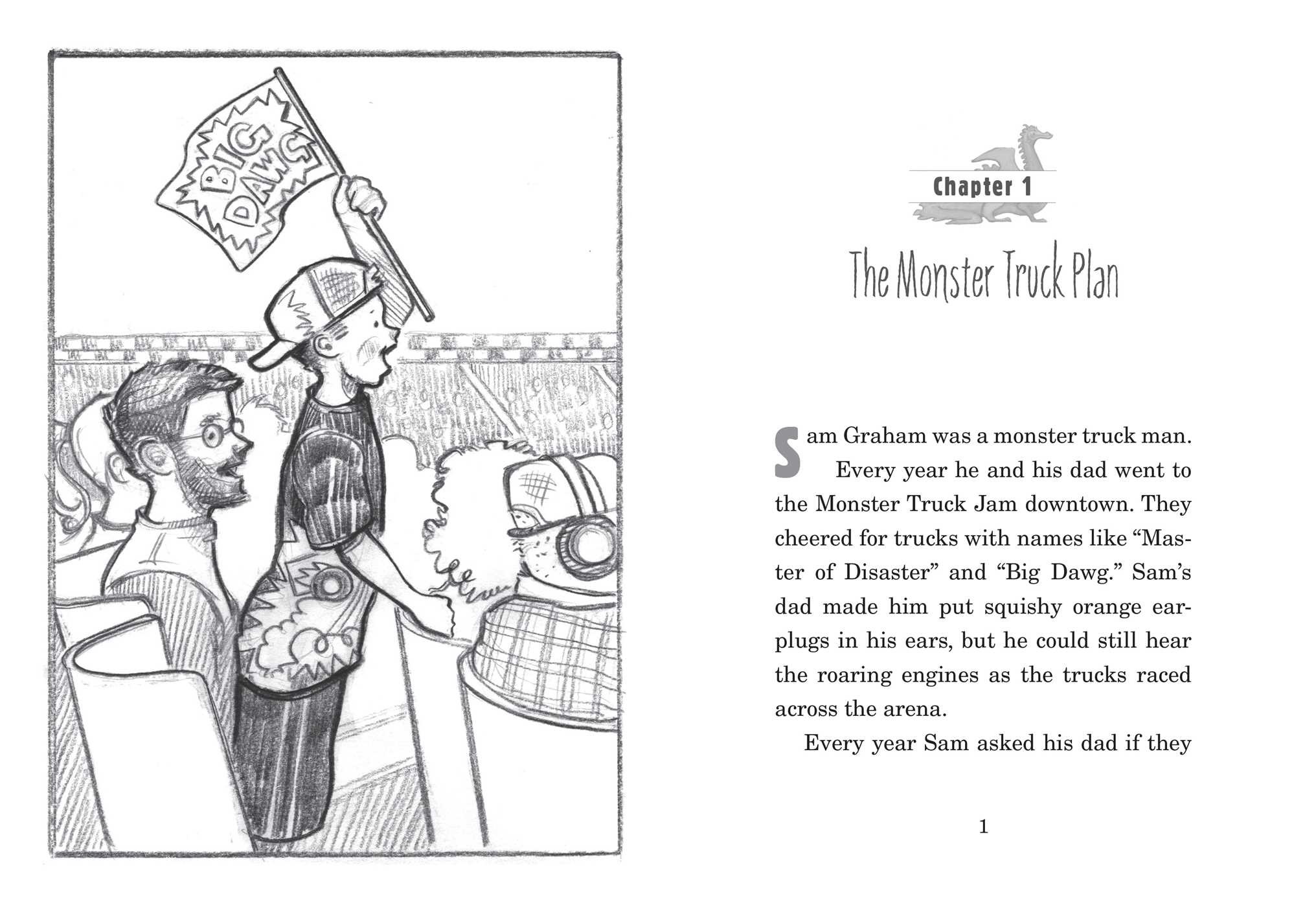 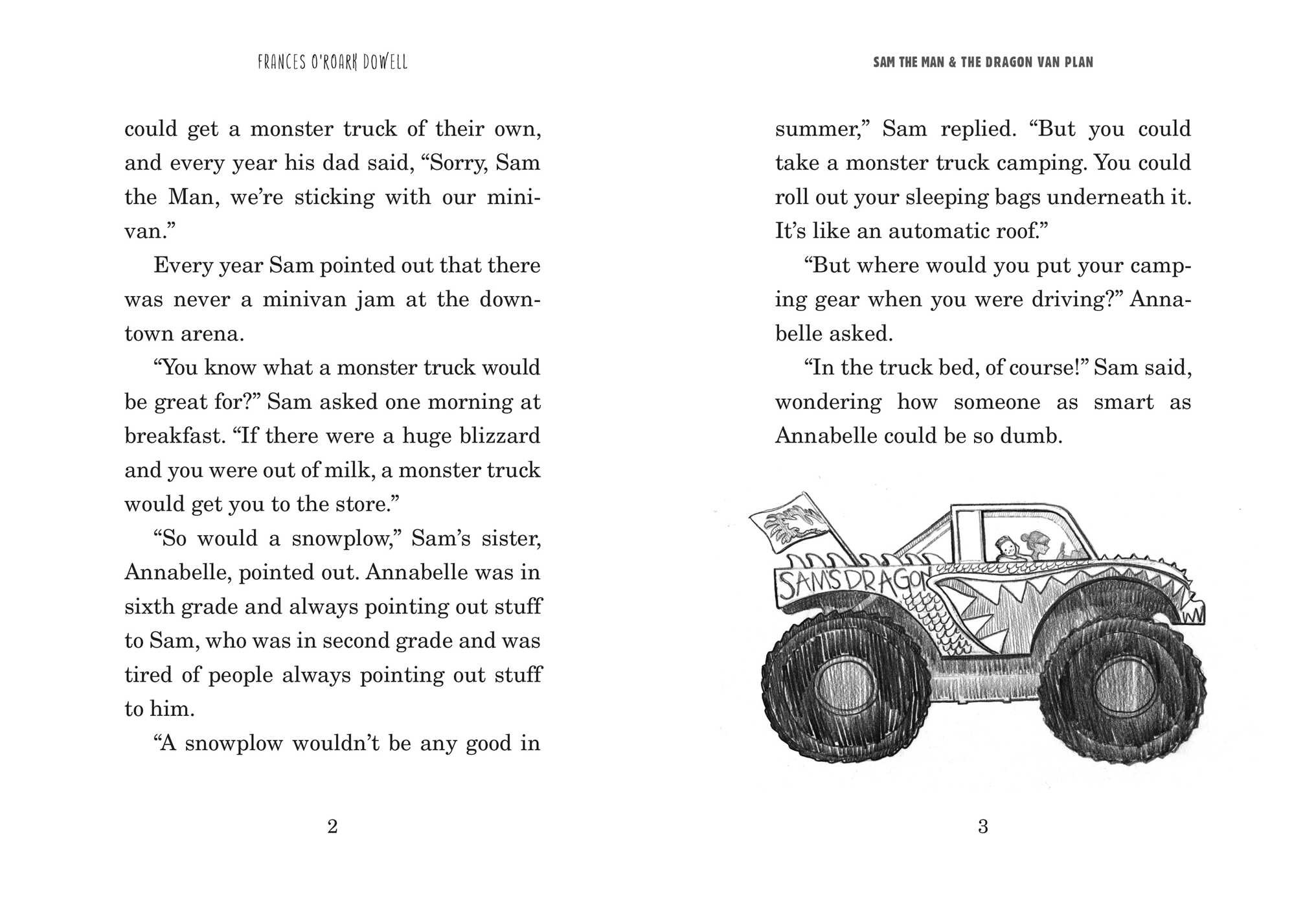 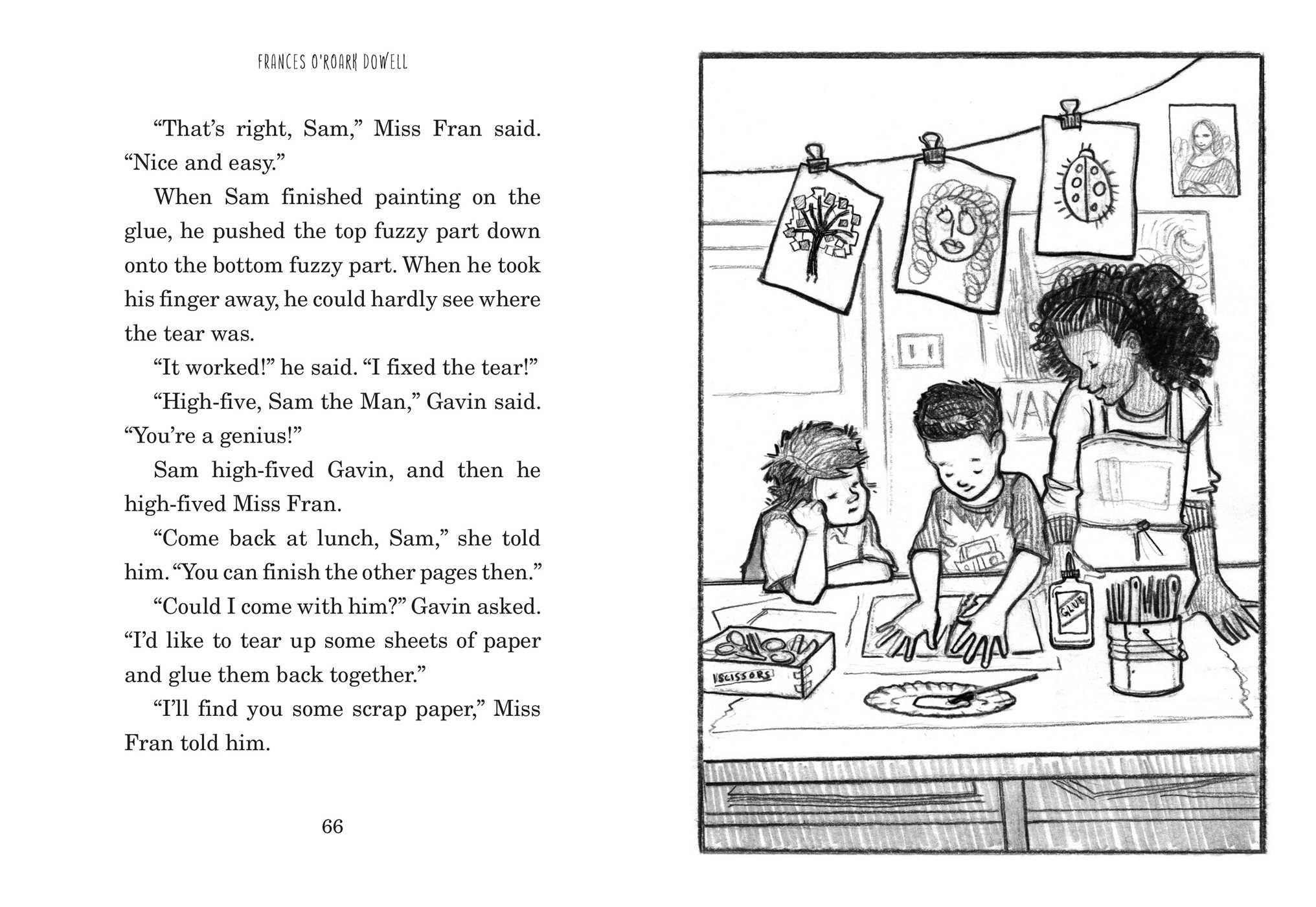 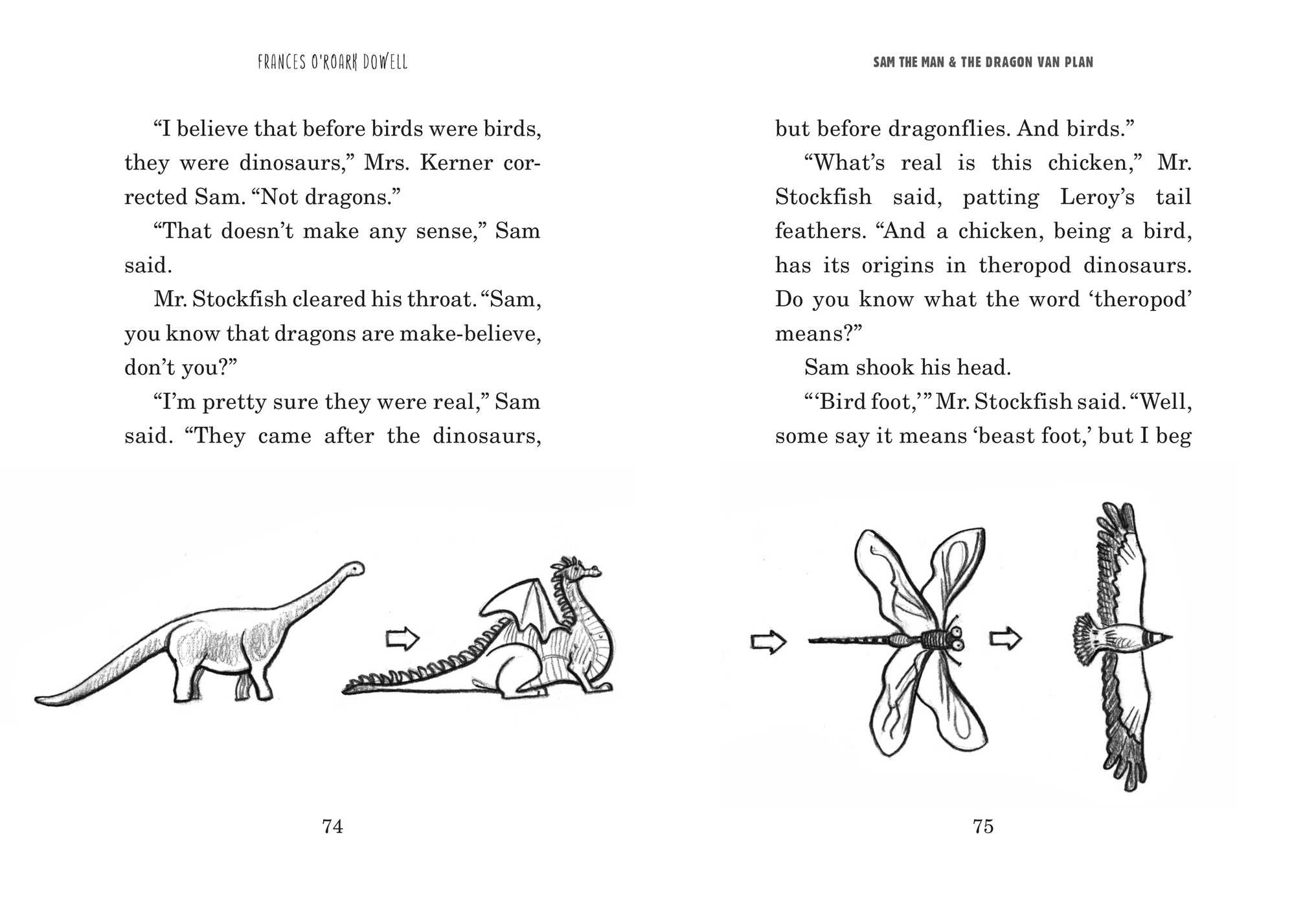 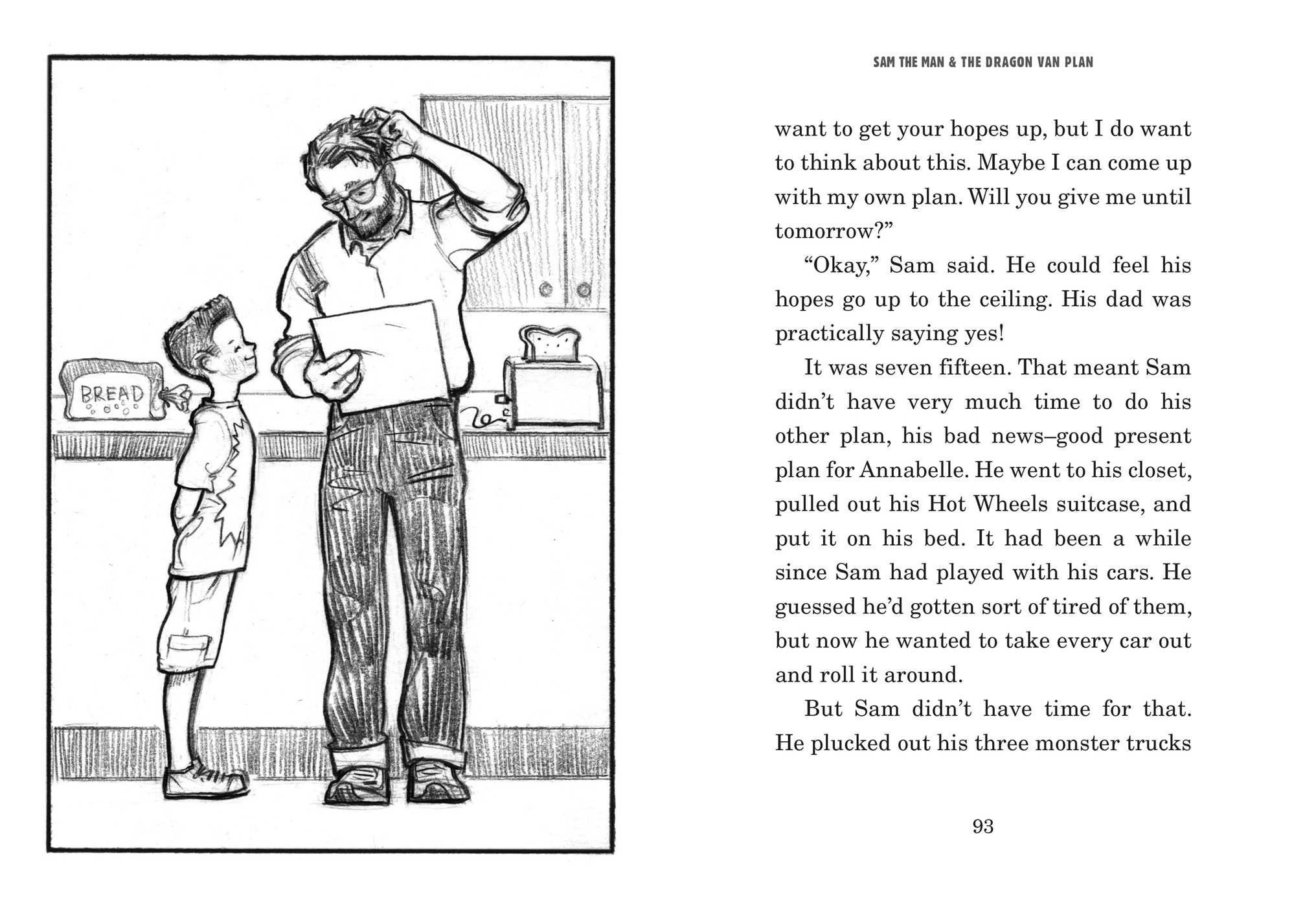 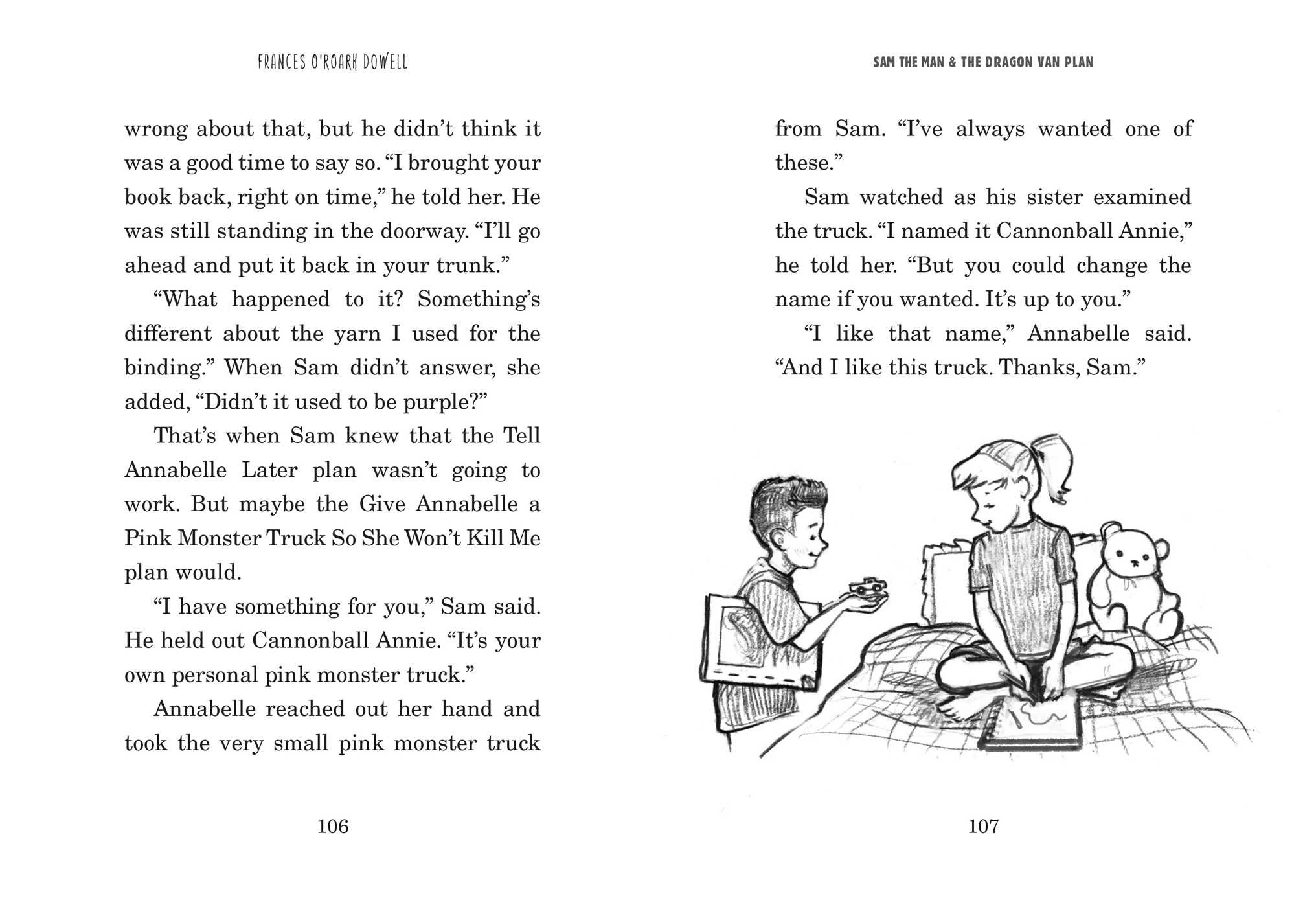 Sam the Man is back with not one, but TWO plans in this third hilarious chapter book in the Sam the Man series from Frances O’Roark Dowell.

Sam Graham is a dragon fan and a big truck man. Monster trucks to be specific. And when the family minivan needs replacing, Sam has the perfect plan: get a family monster truck instead!

But convincing Mom that a monster truck is the way to go may prove to be a little too difficult, even for Sam. So he comes up with plan number two: Turn the minivan into a monster minivan with a super-cool dragon painted on it! First, though, Sam has to convince his family why a monster minivan is the best choice—oh, and learn how to paint a dragon…

Every year he and his dad went to the Monster Truck Jam downtown. They cheered for trucks with names like “Master of Disaster” and “Big Dawg.” Sam’s dad made him put squishy orange earplugs in his ears, but he could still hear the roaring engines as the trucks raced across the arena.

Every year Sam asked his dad if they could get a monster truck of their own, and every year his dad said, “Sorry, Sam the Man, we’re sticking with our minivan.”

Every year Sam pointed out that there was never a minivan jam at the downtown arena.

“A snowplow wouldn’t be any good in summer,” Sam replied. “But you could take a monster truck camping. You could roll out your sleeping bags underneath it. It’s like an automatic roof.”

“But where would you put your camping gear when you were driving?” Annabelle asked.

“In the truck bed, of course!” Sam said, wondering how someone as smart as Annabelle could be so dumb.

Sam rolled his eyes at his sister. “You get waterproof stuff for camping. Everybody knows that!”

Annabelle picked up the sports page. She looked like she was losing interest in the conversation. “What about the fact that it’s illegal to drive monster trucks on regular streets?” she asked. “Wouldn’t that be a problem?”

Sam stood up and carried his cereal bowl over to the kitchen sink. He was losing interest in this conversation too, especially because Annabelle didn’t know what she was talking about.

If anyone would know about trucks, Sam thought as he put on his coat and hat, it would be Miss Louise, the school bus driver. A school bus was even bigger than a monster truck, although it wasn’t as high up in the air, and it usually didn’t have a scary monster face drawn on the hood. In fact, buses never had anything good painted on them. Sam could think of a million things you could paint on a school bus—dragon scales would be cool, and so would big, creepy eyes around the headlights so that maybe the front of the bus looked like a really spooky jack-o’-lantern.

“Do you think Miss Louise has ever driven a monster truck?” Sam asked his friend Gavin as they waited at the bus stop. “I think she’d be good at it.”

“Miss Louise would be an awesome monster truck driver!” Gavin agreed. “But once, I heard her say that she spends her weekends making cat videos. Did you know she has five cats?”

“I wonder if her cats like chickens?” Sam had a chicken named Helga who lived in a coop at his neighbor’s house. Mrs. Kerner had five chickens, and Sam’s friend Mr. Stockfish had one chicken, so there were seven chickens in all. Maybe Sam should start making chicken videos. He’d probably get famous and make lots of money, and then he could buy his own monster truck. He’d call it the Sammer Hammer Jammer, and he’d drive it all over town as soon as he got his driver’s license.

“Monster trucks are legal to drive anywhere, right?” he asked Miss Louise when he was climbing up the steps of the bus.

“I don’t know much about monster trucks,” Miss Louise told him, “but I do know you can’t drive them on streets or highways. They’re too high off the ground, for one thing, and too dangerous. They’re more likely to roll over than regular cars.”

So the two things Sam liked best about monster trucks were what made his dream to drive one impossible?

He was still in a grumpy mood that afternoon when he got off the bus. He was looking forward to stomping across the kitchen floor and eating frozen waffles without even bothering to put them on a plate when he got home. Then he would go take Mr. Stockfish on their daily walk to visit the chickens. Mr. Stockfish was always grumpy, so he and Sam would get along better than ever.

The front door was unlocked. “Mom?” Sam called out as he walked inside. “Are you home?”

“In the kitchen,” Sam’s mom said. Her voice sounded sort of strange. Maybe she was in a grumpy mood too.

Sam found his mom sitting at the table, drinking a cup of tea that smelled like apples and cinnamon. Sam’s mom only drank tea when she was trying to calm down or right after she talked to Aunt Karen on the phone.

“Did someone steal the minivan?” Sam asked. “Is that why you’re drinking tea?”

“A school bus?” Sam practically shouted. He thought his mom might go to jail for that.

“No, a city bus. I was changing lanes. . . .” Sam’s mom stopped and rubbed her forehead. She looked like she had a headache. “It’s a long story. Let’s just say I wasn’t paying close enough attention.”

“Were you talking on your phone?” Sam asked. “Because you always say it’s stupid to talk on the phone when you’re driving.”

“No! I never talk on my phone in the car!” Sam’s mom sounded like she couldn’t believe Sam would even suggest such a thing. “I was . . . singing. And . . . dancing. Well, not exactly dancing—it was more like bouncing.”

“Did that song about walking on sunshine come on the oldies station?” Sam asked.

His mom nodded. “It’s very hard not to bounce to that song. And really, it’s not like I ran into the bus. I just got very, very close to it. There was no damage done to the bus at all. The minivan, on the other hand . . .”

Sam’s eyes widened. Would they have to get a new car? His eyes opened even wider. Maybe they could get a really cool car this time, a car that didn’t make Sam practically fall asleep from boredom every time he got into it.

“No, Sam, it’s not,” his mom said, and then she took another sip of her apple-cinnamon tea. “It was pretty old to begin with, and then with the damage, well, it would cost more to repair it than the van is worth. We’re going to have to get a new one.”

Wait a minute! Maybe instead of another minivan, they could get a monster truck, a small one that you could drive without getting a ticket! Sam wasn’t sure if there was such a thing as a mini–monster truck, but there might be.

He knew he needed to be very careful. If Sam asked to get a monster truck—or even a mini–monster truck—while his mom was feeling sad and upset, she’d probably say no. He’d have to figure out the right way to make her see that a monster truck was the right choice for their family.

Sam would have to come up with the perfect monster-truck plan.

Frances O’Roark Dowell is the bestselling and critically acclaimed author of Dovey Coe, which won the Edgar Award and the William Allen White Award; Where I’d Like to Be; The Secret Language of Girls and its sequels The Kind of Friends We Used to Be and The Sound of Your Voice, Only Really Far Away; Chicken Boy; Shooting the Moon, which was awarded the Christopher Award; the Phineas L. MacGuire series; Falling In; The Second Life of Abigail Walker, which received three starred reviews; Anybody Shining; Ten Miles Past Normal; Trouble the Water; the Sam the Man series; The Class; How to Build a Story; and, most recently, Hazard. She lives with her family in Durham, North Carolina. Connect with Frances online at FrancesDowell.com. 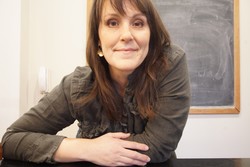 Amy June Bates has illustrated books including the Sam the Man series; Sweet Dreams and That’s What I’d Do, both by singer-songwriter Jewel; and Waiting for the Magic by Patricia MacLachlan. She is the author-illustrator of The Big Umbrella, which Booklist raved, “A boundlessly inclusive spirit...This open-ended picture book creates a natural springboard for discussion.” She lives in Carlisle, Pennsylvania, with her husband and three children.