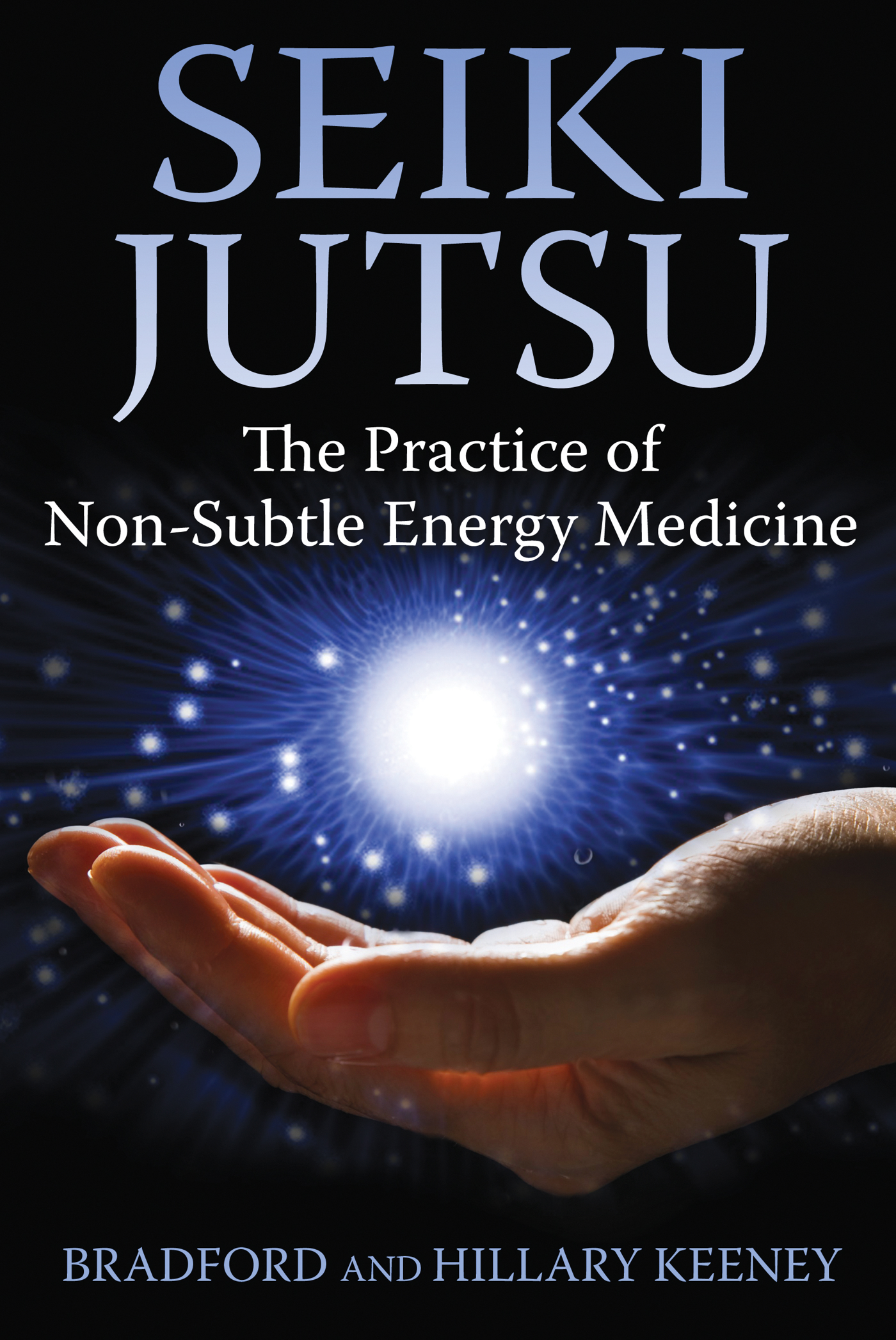 The Practice of Non-Subtle Energy Medicine

A guide to the ancient Japanese art of working with concentrated life-force energy, seiki, for self-healing, revitalization, and creativity

• Explains how to awaken seiki, guiding you through the stages of seiki development

• Includes many inspiring stories from the authors’ decades of healing work

Seiki jutsu is the ancient Japanese shamanic art of working with seiki, concentrated life-force energy, for self-healing, revitalization, creativity, and inspiration. Known in Tantra as kundalini and to the Kalahari Bushmen as n/om, seiki has been called “activated and strengthened chi” and is often described as a “non-subtle” energy because it is strongly felt when awakened. Centering on spontaneity of movement to gather and transmit seiki, the practice of seiki jutsu does not require years of training or endless memorization of forms. Once you have received seiki, your daily practice will teach you to activate the flow of this powerful energy to recharge your body, mind, and spirit and empower you to find your unique destiny.

Renowned seiki jutsu masters Bradford and Hillary Keeney detail the history and lineage of seiki jutsu beginning in 8th-century Japan and reveal how this ancient practice was used by the samurai. The authors show how seiki underlies the “flow experience” sought after by artists, musicians, athletes, and performers of all types. They explain how to recognize the awakening of seiki, guiding you through the stages of seiki development with stories of healings they have participated in or witnessed. They reveal how to develop your own daily practice for self-healing and renewal as well as provide active exercises to discover your life’s purpose, infuse your everyday activities with seiki, and motivate yourself to create a fulfilling life. They show that no method of performance, spiritual practice, or philosophy of life can fully awaken unless you are instilled with sufficient seiki. Regarded in Japan as “the fountain of youth,” seiki jutsu provides a way to bring maximum vitality into every aspect of life.

Immediately after receiving seiki, it is the traditional Japanese custom to teach the recipient the daily practice of seiki taisou, the basic seiki exercise. Once you are filled with seiki, you need to keep it moving and make it an active participant in your everyday life. Here is the miracle: the daily seiki exercise requires no willpower, discipline, or stamina. It is simply three steps that are easy and natural. Unlike aerobic exercise, yoga, diets, and innumerable other therapeutic programs, the daily seiki exercise is effortless. You could say that its purpose is to perform spontaneous effortlessness of both mind and body. Doing so awakens and amplifies the movement of seiki within you.

When you master this seiki exercise, endless benefits will enter your life. Seiki jutsu, as always, never asks you to force any movement, thought, attitude, or feeling. It only asks that you take a 10-20 minute recess each day to allow yourself to move as your body desires, doing so without purpose, without work, and without effort. In this break from the constant demands of everyday life, life’s vital energy will be delivered to you, ready to energetically charge your whole being.

In the traditional Japanese practice of seiki jutsu, you are asked to sit on a wooden stool and then allow your body to perform a spontaneous movement. Simply sit and wait for something to happen. You may sway from side to side, back and forth, bob up and down, or in circular or elliptical patterns. The movement may be localized more at the base of your spine, in your neck, or in your legs or arms. As you sit on the stool and allow movement, you may fall into any imaginable motion. The pattern may stay locked in one form or it may change frequently. In seiki jutsu, your body is allowed to play, tinker, and experiment with these motions, and in doing this you learn to fall into movements so natural that you feel as if you are being moved by an unseen force.

Seiki jutsu reminds you of your previous expertise with natural movement--when you were a child you allowed your body to move naturally. It happened unconsciously without any intentional choreography. Now as an adult you are invited to return to those freely expressed movements. Use this freedom of expression to take you into automatic motion, where movement takes place without your having to make it happen. This spontaneous motion can bring you inside the “seiki tuning zone,” a place of complete absorption and enhanced awareness. Here you must learn to ride out the motion and feel the ecstatic emotion it brings, allowing it to tune you in a natural and effortless way. This is when you have a sympathetic resonance with the vital life force and find that it energizes and revitalizes your whole being.

Seiki continues to dance all the parts of me and I no longer can track where the movements begin and end. They are happening everywhere. I am immediately and fully awake, completely aware of the present vitality that is surging through my body. My mind feels empty though it is full of seiki currents that bring forth a sense of inner expansiveness. And then there are the surges of tingling sensations, vibrations, and interspersed tremors. They take me inside an experience that is not anything like the trance facilitated by a hypnotist. Here I do not get sleepy. Instead I am more awake. It is difficult to describe, however, as this experience renders all categorical names absurd. Here we only find metaphors that are inspired to transform without concern for conceptual encapsulation. This is a close encounter with life’s vitality. Here there is nothing separate from the whole of me. No mind separate from body, no consciousness differentiated from that which holds it, no life that is distinct from whatever can be distinguished by trickster mind. This absorption is being plugged into the source. It’s an incredible buzz, a sound way of opening yourself up. Seiki opens us so much that we become the universe, the vast all inside the awe that dissolves everything into a river of pulsing energy.

The seiki exercise is both a way to prepare you to receive seiki and a way of nurturing seiki after you have received a transmission. It is not necessary for you to be filled or overflowing with seiki as a prerequisite for initiating the seiki exercise and movements. Anyone at any time can start moving into these effortless rhythms. The spontaneous movements of the seiki exercise help prepare you for receiving seiki, just as the reception of seiki brings forth more enhanced spontaneous movement. When you realize that both preparation and reception are not two, but also not one, then you become readied for a life-changing journey with seiki.

We have identified the essence of the seiki practice, paring it down to its basic principles so that it may be easily learned and practiced by anyone. The seiki exercise basically involves three easy steps that are outlined for you as follows:

Step One: Initiate a body movement that has rhythm. Sit and start a simple motion of your body, like rocking, that turns into a vibrant rhythmic pulse.

Step Three: Enter the seiki tuning zone. Allow the free and spontaneous expression of your body to carry you into an ecstatic awareness that is free of mind-body dualisms and disassociated experience. We playfully refer to this as the “seiki tuning zone.”

Seiki arrives without notice. It’s here in an instant, showing up the moment you forget about trying to receive it, as you feel absorbed in the movements. There is no longer mind nor body. The more they disappear, the more you become seiki.
Bradford Keeney

Bradford Keeney, Ph.D., is an internationally renowned scholar, therapist, and shaman who has led expeditions throughout the world to study cultural healing practices. He is an Honorary Senior Research Fellow at the Rock Art Research Institute, University of Witwatersrand, Johannesburg, South Africa, and is the author of Bushman Shaman: Awakening the Spirit through Ecstatic Dance, Shamanic Christianity: The Direct Experience of Mystical Communion, Shaking Medicine: The Healing Power of Ecstatic Movement, and the editor of the Profiles of Healing series.

Hillary Keeney, Ph.D., is a traditional healer, senior research fellow at the University of Louisiana, and distinguished visiting professor at Benemérita Universidad Autónoma de Puebla in Mexico. She cofounded with her husband Bradford Keeney the Keeney Institute for Healing in New Orleans.

“Brad and Hillary Keeney are authentic healers who transmit the energetic life force. Their work reveals a remarkable, rejuvenating, and healing spiritual practice from Japan that promises to open new ways of experiencing your every day. The Keeneys and their teaching of seiki jutsu will change your world!”

– Carl A. Hammerschlag, M.D., chief of community mental health at Gesundheit! Institute and author of

“This text is in the tradition of great memoirs of spiritual discovery like those of Lama Govinda, Carl Jung, and Gurdjieff. . . . The teaching of seiki jutsu itself is yet again one of those radically simple openings to the real--the reminder we always need to return again and again to our origins.”

“We thank the Keeneys for their introduction of seiki jutsu to the healing arts. Their way of tapping in to the Dreaming brings creativity to spirituality and healing. We love the direction of this teaching!”

“Bradford and Hillary Keeney are bold explorers investigating the world’s rich tradition of healing arts. With deep respect and awe for the cultures they visit, the two of them bring back wisdom and practical methods of boosting our health, happiness, and sense of meaning. Their latest subject is seiki jutsu, a powerful form of movement therapy and energy work that looks promising as a way to alleviate some of the problems of our increasingly fragmented and sedentary lives.”

– Jay Walljasper, former editorial director and editor of Utne Reader, and author of All That We Share

“Seiki Jutsu ends with a conversation on "Juggling Zen, Jazz, and Seiki" where the Keeneys put on an awesome display of their wit, playfulness, insight, spirituality, and polyphonic thinking. And because they are filled with energy, it all comes across as perfectly effortless and totally natural!”

“With a focus on energy, good, bad or unusual, this book is the perfect introduction to Seiki. The authors provide a unique history and examples of how the practice used by the Samurai warriors in the 8th century still works for contemporary artists, athletes, musicians and “performers” in all areas.”

The Practice of Non-Subtle Energy Medicine