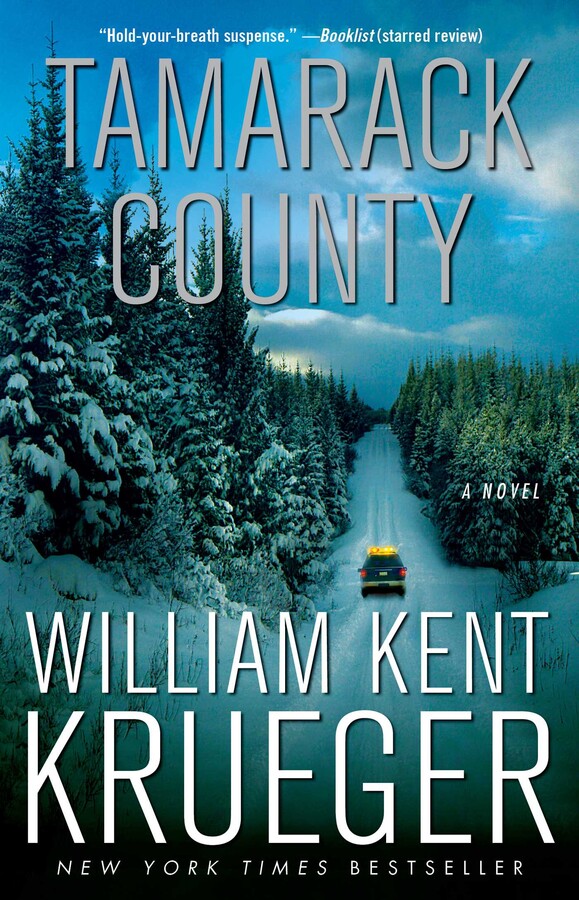 During a blizzard one bitter winter night, just days before Christmas, the car belonging to the wife of a retired local judge is discovered abandoned on a rural county road in Tamarack County. After days of fruitless searching, there is little hope that she’ll be found alive, if she’s found at all.

Cork O’Connor, the ex-sheriff of Tamarack County, notices small things about the woman’s disappearance that disturb him. When the beloved pet dog of a friend is brutally killed and beheaded, he begins to see a startling pattern in these and other recent dark occurrences in the area. And after his own son is brutally attacked and nearly killed, Cork understands that someone is spinning a deadly web in Tamarack County. At its center is a murder more than twenty years old, for which an innocent man may have been convicted. Cork remembers the case only too well. He was the deputy in charge of the investigation that sent the man to prison.

With the darkest days of the year at hand, the storms of winter continue to isolate Tamarack County. Somewhere behind the blind of all that darkness and drifting snow, a vengeful force is at work. And Cork has only hours to stop it before his family and friends pay the ultimate price for the sins of others.

Tamarack County CHAPTER 1
Like many men and women who’ve worn a badge for a good part of their lives, Corcoran Liam O’Connor was cursed. Twice cursed, in reality. Cursed with memory and cursed with imagination.

In his early years, Cork had worked for the Chicago PD, the South Side. Then he’d spent a couple of decades in the khaki uniform of the Tamarack County Sheriff’s Department, first as a deputy and finally as sheriff. He’d seen the aftermath of head-on collisions, of carelessness or drunkenness around farm or lumbering equipment, of bar fights with broken bottles and long-bladed knives, of suicide and murder in every manner. And so the first curse: he remembered much, and much of his memory was colored in blood.

The second curse came mostly from the first. Whenever he heard about a violent incident, he inevitably imagined the details.

And so, when he finally understood the truth of what happened to Evelyn Carter, he couldn’t keep himself from envisioning how her final moments must have gone. This is what, in his mind’s eye, he saw:

It was seven o’clock in the evening, ten days before Christmas. The streets of Aurora, Minnesota, were little valleys between walls of plowed snow. It was snowing again, lightly at that moment, a soft covering that promised to give a clean face to everything. The shops were lit with holiday lights and Christmas trees and Santa figures and angels. There were people on the sidewalks, carrying bags and bundles, gifts for under the trees. They knew one another, most of them, and their greetings were sincere good wishes for the season.

Evelyn Carter was among them. She was small, not quite seventy. All her life she’d been a good-looking woman and had taken good care of herself, so she was attractive still. She wore an expensive coat trimmed with fox fur, purchased when she’d visited her daughter in New York City in October. On her head was a warm gray bucket hat made of rabbit’s fur. In her left hand, she gripped a shopping bag filled with little gifts, stocking stuffers. A cell phone was cradled in the gloved palm of her right hand, and she stood on the sidewalk, looking at a photo of her grandson dressed as a shepherd for the church pageant this coming Sunday. When the door of Lilah Buell’s Sweet Shoppe opened at her back, the smell of cinnamon and cider ghosted around her, and she smiled in the wash of the good spirits that seemed to her a beacon of hope in an otherwise dark winter season.

Her big black Buick was parked on Oak Street, and by the time she reached it and set her shopping bag in the passenger seat, she was tired. Evelyn had a good but troubled heart. She carried nitroglycerin pills in a tiny bottle in her purse. She was feeling some uncomfortable pressure in her chest, and when she’d finally seated herself behind the wheel, she sat for a moment, letting a nitro pill dissolve under her tongue. She hadn’t yet started the engine, and as she sat, the windows gradually fogged from her slow, heavy breathing.

She didn’t see the figure approaching her door.

She was thinking, maybe, about her grandson in Albuquerque, or her daughter in New York City, saddened that all her family had fled Tamarack County and moved so far away. She knew the reason. He was at home, probably staring at the clock, complaining aloud to the empty room that she’d been gone too long and had spent too much. And if it was, in fact, her husband she was thinking of, she probably wasn’t smiling and perhaps her chest hurt a little more. The windows were heavy with condensation, and maybe she felt suddenly isolated and alone, parked a block from the bustle of Center Street and the welcoming lights of the shops. So she finally reached out and turned on the engine. She was undoubtedly startled when the shadow loomed against the window glass near the left side of her face. And that damaged thumper of hers probably started hammering a little harder.

Then she heard the familiar voice. “Hey, Evelyn, you okay in there?”

She pressed the button, and the window glided down.

It was the priest from St. Agnes, Father Ted Green, bending toward the window and blowing foggy puffs from where he stood on the curb.

“I saw you get in and then nothing,” he explained with a smile that conveyed both reassurance and concern. “I was afraid maybe you were having some difficulty.”

He was young and wore a black leather jacket, which looked good on him. To Evelyn Carter, there’d always been something a little James Dean about him (she was fond of saying so over coffee with her friends), and although that unsettled her a bit during Mass, she didn’t find it at all unpleasant.

His gaze slid to the shopping bag in the passenger seat. “Busy afternoon, looks like. I hope you’re planning on going straight home and getting a little rest.”

“A little rest would be good,” she agreed.

“All right, then. See you Sunday. And please give my best to the Judge.” He straightened and stood erect, smiling a kind of benediction, and he watched as she pulled carefully into the street and drove slowly away. Later, when he reported this conversation, he would say how wan she looked, and that he continued to worry.

She headed past the high school and the gravel pit and took County 6 into the low, wooded hills west of town. The snow was coming down more heavily then, and maybe she was concerned that if it began to fall in earnest, the way it had so often that December, she’d be trapped, alone with her husband until the plows cleared the rural roads. If this was what she was thinking, there was a good chance she was frowning.

Two miles out of Aurora, she approached what everyone in Tamarack County called the Orly cutoff. It was washboard dirt and gravel, but it was the quickest way to get to the tiny crossroads known as Orly, if you were in a hurry. Evelyn Carter and her husband, Ralph, whom everyone except Evelyn called the Judge, lived on the cutoff, whose official name was 127th Street. Through a thick stand of birch and aspen long ago blown bare of leaves, Evelyn could see the lights of her home, which had been built a good hundred yards back from the road at the end of a narrow tongue of asphalt. Their nearest neighbor was a full quarter of a mile farther north, and to Evelyn, the lights of her home looked cold and isolated and uninviting. When the Judge finally passed away, she was planning to sell the house and move to New York City, to live where she had family and where there were people all around her instead of trees and emptiness.

As she approached her driveway, she slowed. It was a difficult angle, and the Buick was enormous and felt awkward in its maneuvering. She always took the turn with great care. When the Judge was with her, he usually complained that she drove like an old woman.

Once she’d negotiated the turn, she stopped abruptly. Someone was kneeling in the middle of the drive. In the headlights, the snow was like a gauzy curtain, and what lay behind it was vague and uncertain. She couldn’t quite make out who it was on his knees on the snow-packed asphalt, head bowed as if in prayer. But then she recognized the red wool cap she’d knitted for her husband the Christmas before, and although she couldn’t make sense of the whole scene, she relaxed and rolled down her window and called out, “What are you doing there, Ralph?”

The figure didn’t move or speak.

“For heaven’s sake, are you all right?” Evelyn was suddenly afraid. Not for her own safety, but for the well-being of her husband. The truth was that, as his faculties had declined and his reliance on her had increased, she’d often imagined his passing, imagined it as if it were the pardon of a long prison sentence. But faced with the actuality of some crisis, her natural response was concern. She unsnapped her seat belt, opened the door, and slid from the car, leaving the engine running as she hurried toward the kneeling figure.

Too late, she saw, in the glare of the headlights, the flash of the knife arcing upward to meet her. The blade, large and sharp and made for gutting deer, sliced easily through her fox-fur-trimmed coat and lodged deep in her belly, where the ice-cold steel quickly warmed. And although she was probably too stunned to speak, maybe with a final bewilderment in a life that she’d never really understood anyway, she looked into the face she knew well and asked herself the unanswerable question: Why?

William Kent Krueger is the New York Times bestselling author of This Tender Land, Ordinary Grace (winner of the Edgar Award for best novel), as well as eighteen acclaimed books in the Cork O’Connor mystery series, including Desolation Mountain and Sulfur Springs. He lives in the Twin Cities with his family. Learn more at WilliamKentKrueger.com.

“...a winter’s tale that will both break and warm the reader’s heart.... Krueger’s evident empathy for the Ojibwe and their traditions and values blends seamlessly with horrific violence played out against O’Connor’s struggles to heal his family’s wounds—and his own.”

“...hold-your-breath suspense, heightened by the isolating blizzards of a Minnesota winter and the eerie presence of a stalker.... Because Krueger works in the history of his characters’ relationships in a clear and elegant way, this exceptionally scary suspense story will prove riveting for both newcomers to the series and readers who have followed Cork as he and his family have aged and grown.”

“Krueger is in fine form in this superb, highly atmospheric tale, deftly capturing a wide range of emotions and conflicts between assorted characters. . .you’re in for a real treat.”