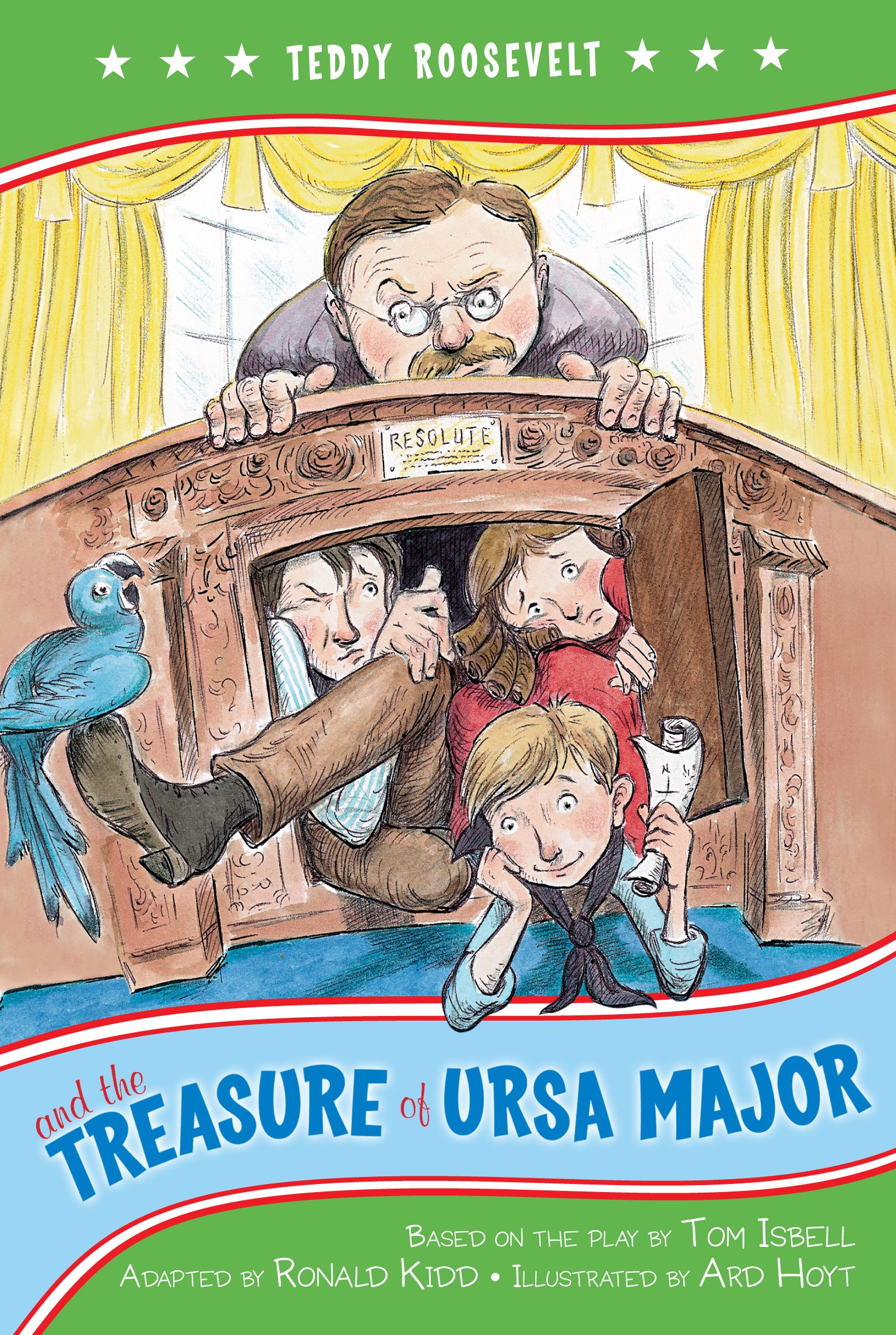 Teddy Roosevelt and the Treasure of Ursa Major

Imagine if you lived in the White House! The first book centers around three of Theodore Roosevelt's children, Kermit, Ethel and Archie. Their mother is away and they are left in the charge of a comical nanny named Mrs. Duffit and their President father, who is very preoccupied with the visit from a quirky Russian Ambassador, Count Cassini. Eager to keep the children out of trouble, President Roosevelt sends his children on a treasure hunt--just like Treasure Island, only in the White House. There are mysteries popping out of Dolley Madison paintings and strange goings-on in the attic--and the result is a rollicking good time and a crash course in American history too. Ron Kidd has masterfully adapted the script from the original play into a novel for us, and Ard Hoyt's playful illustrations are interspersed throughout.

It appeared out of nowhere, a dim shape with gleaming eyes and a voice like sandpaper.

The voice faded out, and the shape melted away.

My name is Archie Roosevelt. I’m eleven years old. I live with my father, mother, five brothers and sisters, a rabbit, a pony, a macaw, and a ghost.

I never knew my house was haunted. But then, there were a lot of things I didn’t know about it. Once, soldiers set it on fire and burned it to the ground. It has a desk made from an abandoned sailing ship. And according to legend, it’s filled with secret passageways.

Oh, there’s one other thing I learned about it. They say that somewhere, among the rooms or inside the walls, there’s a hidden treasure.

You’ve probably heard of my house. You may have even been there. It’s the White House. My father is Theodore Roosevelt, president of the United States.

I found out about the treasure, the ghost, and all the rest one dark, stormy night. The night started normally enough—well, normally for my family.

I came running into the library, holding a cage containing my latest pet. “Hey, Pop, look what I caught. It’s a badger!”

My father was putting on his tie. Leaning down, he squinted at the cage. “That’s not a badger. It’s a mouth with a leg at each corner.”

My fifteen-year-old brother, Kermit, clomped by on stilts. “He didn’t catch that badger. We both did.”

Ethel twirled around, dancing to music that only she heard. “I don’t care who caught it. I think it’s disgusting.” Ethel was thirteen and believed she was smarter than anyone in the room. She was, if you only counted her and the badger.

My father glanced in the mirror and straightened his tie. He has a proud chin, a bristling mustache, and little glasses that he balances on his nose. Some people say he’s short and stocky, but to me he’s ten feet tall.

He turned to his valet, James Amos, who was standing by as usual, perfectly dressed and in control. “James, did you see Mrs. Roosevelt off to her carriage?”

I guess my mother needed a rest. She had all the duties of the First Lady, and in her spare time she raised six children. The two oldest, Alice and Teddy Junior, had already moved out. Earlier that day she had taken the youngest, Quentin, to visit my aunt. That left Kermit, Ethel, and me.

“Did the Russian ambassador arrive yet?” my father asked.

“Due any minute,” said James.

“Pop,” said Kermit, wobbling on his stilts, “are the Russians and Japanese still fighting?”

“Yes, but only until I get them in a room together. Then we’ll iron this thing out.”

I decided it was time to talk about important things.

Ethel twirled past me. “You’ve already got a rabbit.”

“Very well, we’ll get another rabbit,” said my father. “James, make a note. And I need a shave.”

He went to his desk and picked up a sheaf of documents in one hand and a half dozen newspapers in the other. My father likes to do several things at once. He says it’s his way of giving the American people their money’s worth.

Settling into a chair, he opened one of the newspapers and began to read. As James lathered him up, a woman entered the room carrying a bag. Her gray hair was tied up in a bun, and she seemed nervous.

My father looked up from the paper. “Ah, you must be the new governess. Mrs. Gruffit, is it?”

He motioned to James. “This is my friend, James Amos. They say I’m in charge, but he runs the place.”

James nodded. “As smoothly as possible, all things considered. Welcome.”

I thought Mrs. Duffit might like to meet my badger, so I picked up the cage and showed it to her. For some reason, she screamed.

“Don’t worry,” I said. “He bites legs and ankles, but never faces.”

I smiled. “His name is Josiah. I think he’s wonderific.”

“Don’t mind Archie,” said Ethel. “He likes to make up new words by combining old ones.”

I tried to explain. “So wonderific is a cross between—”

“Wonderful and terrific,” said Kermit. “We get it, Archie.”

“How come you don’t let me finish my sentences?” I asked.

He tweaked my nose. “Because I know what you’re going to say before you finish saying it.”

Meanwhile, my father had moved on to other things. “Mrs. Luffit, what do you know about national conservation?”

“Is there any law that prevents me from turning an island into a federal bird reservation?”

James looked up from the lather. “Sir, the Senate may have other ideas.”

“When don’t they have other ideas? There are so many crooks in there that when they call the roll, the senators don’t know whether to answer ‘Present’ or ‘Not guilty’!”

“I thought so,” said my father.

The two of them are always joking around. Sometimes it’s almost like they have their own private language.

“Sir,” James said, “where shall we put the Russian ambassador when he comes? The Red Room?”

“Too bright,” said my father.

My father nodded. “That’s a calming color. It should put him at ease.”

“Of course,” said my father, “as blind as he is, we could put him in the broom closet and he wouldn’t know the difference.”

I noticed Mrs. Duffit standing beside her bag, fidgeting. She said, “I’ve been meaning to ask. What happened to the last governess?”

My father looked up at James. “How’s she doing, by the way?”

“The hospital expects to release her any day now.”

Mrs. Duffit stared at them, then staggered back and sat down—right on the badger’s cage! She screamed again and shot up in the air. We burst out laughing. Mrs. Duffit was turning out to be all right.

When James finished the shave, my father wiped off his face and stood up. “Now listen up, troops. The Russian ambassador is a very important guest. With your mother away, I need you to be on your best behavior. That’s why I’ve brought in our new governess, Mrs. Gruffit.”

“Mrs. Muffit, meet three of my children—Kermit, Ethel, and Archie.”

She nodded briskly. “It’s a pleasure to meet you all.”

“Mrs. Ruffit is from England,” explained my father.

No wonder I didn’t understand her. She spoke English.

“Now, children,” my father said, “I want you all to mind Mrs. Buffit just as you mind your mother and me.”

Kermit said, “When have we ever misbehaved?”

“Let’s see,” said my father. “How about the day you slid down the grand staircase on silver trays? Or when you roller-skated on the East Room floor before the varnish had dried? Or the time a certain daughter pulled a garter snake from her dress? Or Archie threw spitballs on Andrew Jackson’s portrait?”

That last part wasn’t true. I didn’t throw the spitballs. I placed them. It made Andrew Jackson look like he had earrings.

“And no bringing the pony inside,” said my father. “A three-hundred-fifty-pound animal doesn’t belong in the White House elevator.” He turned to James. “By the way, did housekeeping clean that up?”

“That’d be bully. We wouldn’t want the Russian ambassador to step in a pile of you-know-what.”

Chuckling, my father nodded to James, who picked up Mrs. Duffit’s bag. “I’ll show you to your room,” said James, and the two of them left.

Ethel looked at Kermit. “I told you it was a bad idea to bring that pony inside.”

“It would have worked if the horse hadn’t made so much noise,” Kermit replied.

“Would not have worked,” said Ethel.

He looked back and forth between Kermit and Ethel. He glanced over at me, then rolled his eyes and threw his hands in the air. Watching him, I realized just how hard his job was. Almost as hard as being president. 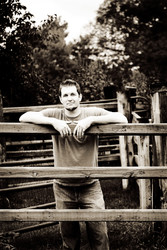 Ard Hoyt has illustrated a number of books, including the New York Times bestsellers I’m a Manatee by John Lithgow and The Hair of Zoe Fleefenbacher Goes to School by Laurie Halse Anderson. Ard lives with his wife and five daughters in Bentonville, Arkansas.

Teddy Roosevelt and the Treasure of Ursa Major

More books from this author: Kennedy Center, The