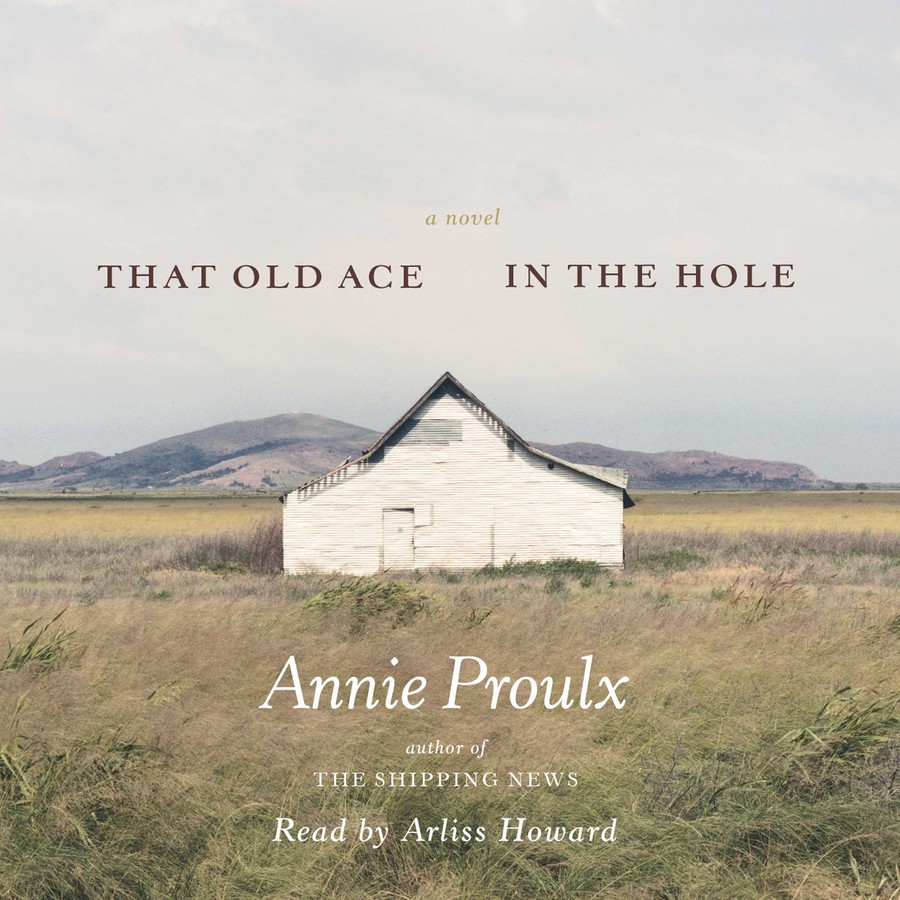 Bob Dollar is a young man from Denver trying to make good in a bad world. Out of college and aimless, Dollar takes a job with Global Pork Rind, scouting out big spreads of land that can be converted to hog farms. Soon he's holed up in a two-bit Texas town called Woolybucket, where he settles into LaVon Fronk's old bunkhouse for fifty dollars a month, helps out at Cy Frease's Old Dog Café, and learns the hard way how vigorously the old Texas ranch owners will hold on to their land, even when their children want no part of it.

Robust, often bawdy, strikingly original, That Old Ace in the Hole traces the waves of change that have shaped the American West over the past century -- and in Bob Dollar, Proulx has created one of the most irrepressible characters in contemporary fiction.

Reading Group Guide for That Old Ace in the Hole
1) What techniques does the author use in the first sentence of this novel to bring the rich world of the Panhandle alive? Similarly, how do the vivid, meticulous descriptions that characterize the first chapter acquaint us not only with Bob Dollar, but with the complex and often contradictory images that dot the Texas landscape?
2) Bob Dollar describes the Panhandle by saying, "it seemed he was not so much in a place as confronting the raw material of human use." How does this quote, which comes early on in the story, set the stage for the struggle that happens between the people of Woolybucket, and the Hog industry? How does the Panhandle give Bob the impression that it is not a place, or a home, but a landscape made for human consumption?
3) Martin Merton Fronk, Cy Frease, Rope Butt, Tater Crouch. These are just a few examples of the sometimes humorous and always original names Proulx gives to the characters who inhabit That Old Ace in the Hole. How much importance should we, as the reader, give to these names? In what ways does the author use names, not only to highlight specific aspects of characters' personalities, but to show where people are coming from and where the plot might be going?
4) Is this a story about small town history and interpersonal dynamics between country folk? Is it a fictionalized account of the dangers of industrializing farmland? Or is it about the constant and inevitable struggle between tradition and modernity? What do you consider to be the central theme of this novel? What theme resonates most strongly for you? Why?
5) There is clearly tension between the ways different characters view animals in this story. While Global Pork Rind considers hogs to be nothing more than "pork units," native Panhandlers like Ace argue that pigs are "intelligent...gregarious animals." Which do you agree with? Is this a moral issue? Does it matter how humans treat animals when they are destined for slaughter anyway? Did this novel make you re-consider any of your personal choices or your view of meat production and consumption in this country?
6) On page 86, LaVon tells Bob about the time period when barbed wire was becoming widely used on the Panhandle, but neglects to say that "in fencing the land a certain balance shifted. Now Harshberger felt that the land was servant to him and owed him a living, owed him everything he could get from it." How does dividing up the land change the way residents relate to it? Although some characters, like Harshberger, make their living from the land they own, what have they lost in their attempts to control it?
7) After the cockfight, Bob comes to understand that "the cocks represent their owners, that the grossest lout, the skinniest Asian, mingled his psychological identification with that of the sleek, beautiful and dangerous birds." In what other ways do the characters in That Old Ace in the Hole project personal desires and insecurities on both animals and inanimate objects?
8) Why do Uncle Tam's plastic trinkets mean so much to him? Discuss value. Why are some things valuable to one person and useless to another?
9) At one point, LaVon says to Bob, "Forget that Pioneer and first-settler stuff...Who do you think settled the west? No, not pioneers. Business! First the traders...then the army posts...then the rayroads. It's all about business in this country. Has been from day one." In what way does this view challenge the traditional, romanticized image of the Wild West? Do you agree that it was industry and not pioneers that settled places like the Texas Panhandle? Using this quote discuss Global Pork Rind's enterprises in the Panhandle.
10) Given the great demand for large amounts of cheap, quickly produced meat in this country, do you think there is a way to resolve the conflict of interests between the farmers and the meat industry? Does the book suggest a way to solve this intricate problem? Do you think there is a solution?
11) Try to imagine these characters in ten years. Where does Bob Dollar end up? What changes come to Woolybucket?

Annie Proulx is the author of eight books, including the novel The Shipping News and the story collection Close Range. Her many honors include a Pulitzer Prize, a National Book Award, the Irish Times International Fiction Prize, and a PEN/Faulkner award. Her story “Brokeback Mountain,” which originally appeared in The New Yorker, was made into an Academy Award-winning film. Her most recent novel is Barkskins. She lives in Seattle.