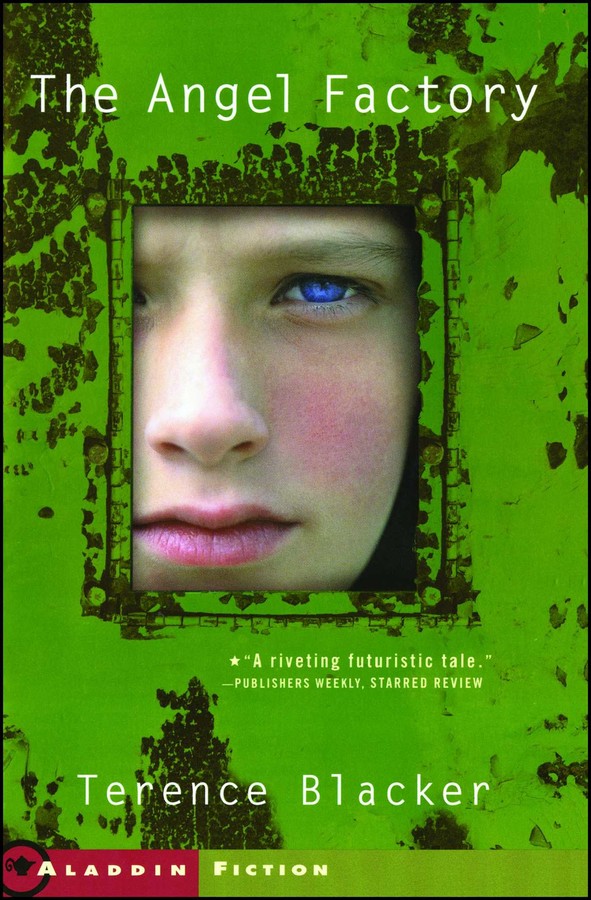 Have you ever imagined that you might be living in a dream reality? That your parents, your sister, your best friend, even your dog isn't who you think they are? Ever felt that while your friends gripe about their dysfunctional families and their grades, you can't really complain? Have you ever thought your life is just a little too good to be true?
If your answer is yes, than you can imagine how Thomas Wisdom feels. Once he starts digging for clues about his family's history and identity, he begins to uncover a truth and a responsibility that are almost too fantastic and tragic for one boy to bear....

The Angel Factory
By Terence Blacker

What would you do if you discovered that your whole life had been based on a lie . . . that your parents had adopted you, and that you were surrounded by angels intent on saving humanity from itself? Thomas Wisdom has just discovered these things about himself, and he doesn’t know what to think. At first he’s honored to be part of the angels’ plan, but then he starts to think about what his compliance would mean to his fellow humans. He doesn’t know what to do—or who he can trust—now that his world has been turned upside down, in this book that Publishers Weekly calls “a riveting, futuristic tale.”

2. How does Thomas react to the news that he is adopted? Why do you think he reacts this way? Is his reaction justified? What changes his attitude about the adoption?

3. How do the members of Thomas’s family relate to each other? How do they feel about the angels’ plan? Where does Thomas fit into all of this?

4. Why were Thomas and Gip friends? Whose side is Gip on? Did either Thomas or Gip end up being true to their friendship?

5. Why is it important for Thomas to meet Karen Garnham, his birth mother? What feelings does this meeting bring out in him? Do you think this is what the Presence had intended with this meeting?

6. Why is Thomas so disturbed by the magic show on Cromer Pier? When and why do his feelings change?

7. Throughout the story, it becomes clear that Thomas is surrounded by angels. Do you think this is because of his role in the Project, or are we led to believe that the angels are widespread? How and to whom do the angels spread their message? What is this message?

9. Did Thomas make the right choice? What did he give up by saying no? What did he gain? What events, people, and things helped him to reach his decision?

2. Try to imagine what would have happened if Thomas had chosen to help the angels with the Project. Write an alternate ending for the book based on this proposition.

3. Mr. Rendle cracks a code to uncover the truth about Thomas’s adoption. Create your own code for encrypting secret information. There are books available at the library to help you get started.

4. Thomas decides not to help the angels in part because he has too many examples of humanity’s goodness—a hug from his birth mother, Manny’s laugh during the magic show, Rendle and his mother—to make him think society would be better off without free will. What things in this world can convince you of humanity’s goodness? Once you have a list, you could hold a debate, with one team arguing on behalf of humanity and free will, and the other team arguing the benefits of the Project.

5. Rendle’s kindness toward his elderly mother makes him seem more human to Thomas. Do you know any older people in your family or neighborhood who might appreciate a visit from you? Perhaps you can offer to visit them on a regular basis.

6. The idea of angels infiltrating all aspects of our lives can seem a little far-fetched, but history is full of examples of outsiders entering countries and trying to change their government, culture, and way of life. Choose one of these examples and write a report on it. What were the motives behind the takeover? Did the process go smoothly or did people—like Thomas—rebel? Were the foreigners able to maintain control?

Terence Blacker has written many novels, including Kill Your Darlings for adults, and Homebird, a teen novel. When he is not writing, he likes to play the guitar, write songs, and play football. He lives and works in an old farmhouse in the countryside of Suffolk, England.

This guide has been provided by Simon & Schuster for classroom, library, and reading group use. It may be reproduced in its entirety or excerpted for these purposes.
Terence Blacker

Terence Blacker has written many novels, including Kill Your Darlings, for adults, and Homebird, a teen novel. When he is not writing, he likes to play the guitar, write songs, and play football. He lives and works in an old farmhouse in the countryside of Suffolk, England.

The Bulletin of the Center Children's Books A thriller that moves at the speed of a runaway train.