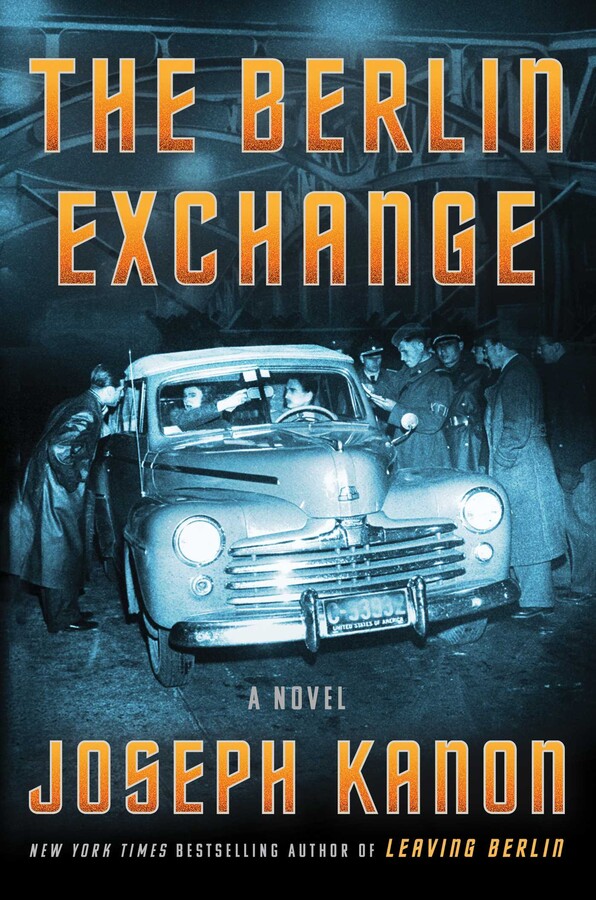 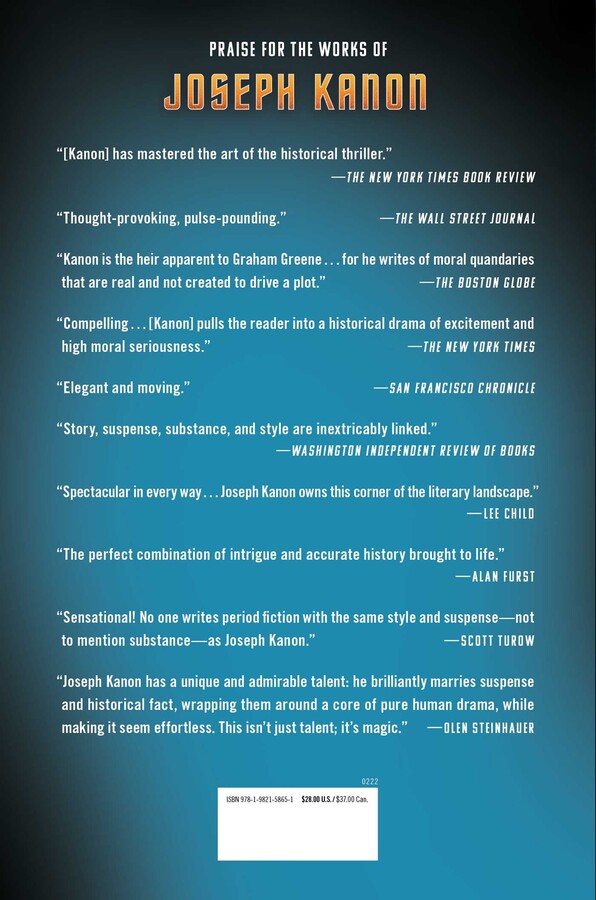 From “master of the genre” (The Washington Post) Joseph Kanon, an espionage thriller set at the height of the Cold War, when a captured American who has spied for the KGB is swapped by the British and returns to East Berlin needing to know who arranged his release and what they want from him.

Berlin. 1963. The height of the Cold War. An early morning spy swap, not at the familiar setting for such exchanges, or at Checkpoint Charlie, where international visitors cross into the East, but at a more discreet border crossing, usually reserved for East German VIPs. The Communists are trading two American students caught helping people to escape over the wall and an aging MI6 operative. On the other side of the trade: Martin Keller, a physicist who once made headlines, but who then disappeared into the English prison system. Keller’s most critical possession: his American passport. Keller’s most ardent desire: to see his ex-wife Sabine and their young son.

The exchange is made with the formality characteristic of these swaps. But Martin has other questions: who asked for him? Who negotiated the deal? The KGB? He has worked for the service long enough to know that nothing happens by chance. They want him for something. Not physics—his expertise is out of date. Something else, which he cannot learn until he arrives in East Berlin, when suddenly the game is afoot.

Filled with intriguing characters, atmospheric detail, and plenty of action Kanon’s latest espionage thriller is one you won’t soon forget.

By clicking 'Sign me up' I acknowledge that I have read and agree to the privacy policy and terms of use.
This reading group guide for The Berlin Exchange includes an introduction, discussion questions, and ideas for enhancing your book club. The suggested questions are intended to help your reading group find new and interesting angles and topics for your discussion. We hope that these ideas will enrich your conversation and increase your enjoyment of the book.

Berlin, 1963. American physicist Martin Keller, jailed for ten years in an English prison for being a Soviet spy, is suddenly offered his freedom and a new life in East Germany. The price is reasonable: a Cold War prisoner exchange—Martin for two American students who tried to help a friend escape over the Berlin Wall and an old MI6 operative. An irresistible offer. But has he merely traded one prison for another? His freedom has been arranged by his ex-wife’s new husband, Kurt, a man who works all sides of every conflict, and his old spymasters still see him as a valuable chess piece. But to what end?

Steeped in atmospheric tension and dizzying layers of secrecy, The Berlin Exchange follows Martin as he finds himself more and more deeply involved in Kurt’s morally ambiguous dealings and political entanglements until finally he has to navigate a treacherous path that could put not just his own life at risk but also that of his ex-wife, Sabine, and their young son, Peter, all the while trying to find answers. Did he do the right thing during the war? How do you live day to day in a surveillance state? And, most urgently, what did all the sets of eyes watching his every move want from him?

1. In chapter 3, Martin meets up with his old handler in Russian intelligence, Andrei, who asks him to begin spying for them again; we learn Martin passed atomic secrets from the United States to Russia. How did this affect your view of Martin? How has his position changed since going to prison?

2. The eyes of the Stasi are always watching. Discuss scenes where you noticed characters being careful about what they said, even when the Stasi weren’t mentioned. What did they seem most nervous about discussing and what did that say about the values of East Germany?

3. In chapter 3, Martin is shocked to learn that political prisoners are ransomed for money to fuel the Eastern economy. When he asks Kurt if that’s legal, Kurt responds, “Legal is what the state says is legal.” How is the line between legality and morality blurred?

4. Kurt frequently brings Martin along with him when he works, allowing Martin to see the illicit dealings that make his new life in East Berlin possible. Why does Kurt want Martin to see what he does, especially given the recurring mantra, “There is no crime in the DDR”? What does it reveal about Kurt’s character?

5. A journalist, Hans Reiger, constantly dogs Martin about a violent incident that occurred during his exchange, in an effort to answer the same questions Martin has about it. In chapter 4, Kurt insists again that “nobody wants such a story,” yet goes out of his way to throw Hans off the trail. What does this signal about the importance of Hans’s story? Who do you think could be interested after all?

6. In chapter 4, Martin is at a meet-and-greet with other physicists working on nuclear energy for East Berlin when he begins talking with Klaus Fuchs, an eminent German physicist and former atomic spy, who feels safe in East Berlin. When Martin questions him, he answers, “No FBI, no more army intelligence, with their questions, trying to trap you. All those years, not knowing if— But now it’s safe. You can breathe.” How is his perspective different from Martin’s?

7. In chapter 5, Martin is with Peter for a photoshoot for an East German television show, Die Familie Schmidt, and Peter mentions that Kurt only allows photographs of the new plazas, free of damage from the war, otherwise “everybody thinks East Berlin is all like that.” How does Kurt’s vision of East Berlin compare with the one you had at the beginning of the novel?

8. In Chapter 5, Andrei asks Martin to find out his old colleague Stefan’s intentions for the atomic peace conference in Geneva. What is he concerned Stefan will do or say? Why would Stefan leaving East Berlin be bad not only for East Berlin but also for Russia?

9. In Chapter 5, Stefan reveals that he will call for an end to the arms race at the conference in Geneva. Then he asks Martin, “What do you say to [your son], when he asks someday? Why you do this work? How do you answer him? . . . How would I explain myself? For making these bombs. What explanation could there be? . . . All of us have to answer for it.” How does this affect Martin going forward? Do you think he would have made different decisions if Stefan had nott made it so personal?

10. Martin’s actions during the war landed him in English prison and would have gotten him executed in America; he feels incredible guilt for helping create weapons that would kill hundreds of thousands of people. Stefan’s decision to call for peace go against the Cold War objectives of East Germany and Russia. Discuss the role that individuals can play in global events and the idea of personal accountability. How are these themes important today?

11. The moment Martin decides not to betray Stefan changes everything. What would you have done? Could you put your life and the safety of your family at risk to make sure the truth was spoken? If Martin knew at the time how it would turn out, do you think he would have made the same decision?

12. On page 220, as Martin convinces Stefan to make a run for the border, Stefan reminds him “You know, they’re no better, the other side,” referring to the United States. Both Martin and Stefan have felt the sting of Western justice, both disagreed with its values, yet they both ultimately decided to return and leave East Germany and its tarnished dream of a Communist state behind. What makes them believe in a better life on the other side of the wall? What do you make of their quest for a better future?

13. In chapter 8, Stefan accuses Martin of “having a taste for” espionage, something Sabine and Andrei also echo as Martin’s plan unfurls. Martin denies it each time. Do you believe him? Would his enjoyment of solving the puzzle to save his family invalidate the morality of his actions? Discuss the complexity of mixed motivations in high-stakes circumstances.

1. Reread the author’s note and, as a group, follow up on one of the real-life figures that inspired the characters in The Berlin Exchange. How are their lives different from those of the book’s characters?

2. An omnipresent concern of East Germany are the optics of its citizens leaving for the West. Research firsthand accounts of life in East Germany. What aligns with the story and what is different? What is the role of propaganda in building a nation? What are some examples of modern propaganda? 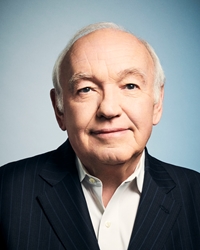 Joseph Kanon is the Edgar Award–winning author of The Accomplice, Defectors, Leaving Berlin, Istanbul Passage, Los Alamos, The Prodigal Spy, Alibi, Stardust, and The Good German, which was made into a major motion picture starring George Clooney and Cate Blanchett. He lives in New York City.

PRAISE FOR THE BERLIN EXCHANGE

"[A] riveting tale of a spy forced to go back into the cold as a way of reclaiming his life. . . . Genuine suspense, including an exciting variation on the border-crossing theme, combine beautifully with moving psychological drama." —Booklist (starred review)

"A novel that gives paranoia a new name, Kanon's latest in a brilliant collection—including Leaving Berlin (2014) and Istanbul Passage (2012)—may be his most tightly rendered. The suspense builds quietly, almost stealthily, before tightening its grip. Another supersophisticated spy thriller from a ranking master." —Kirkus (starred review)