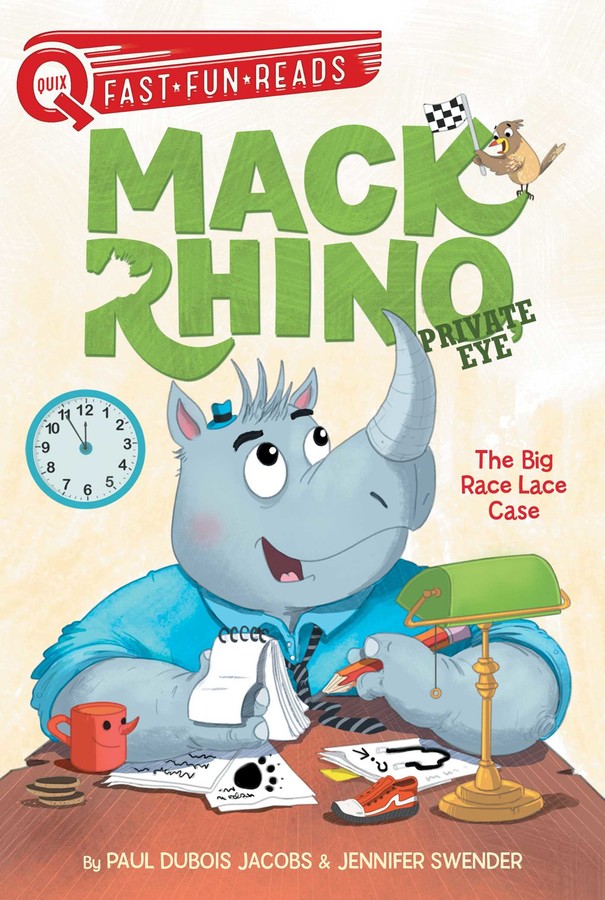 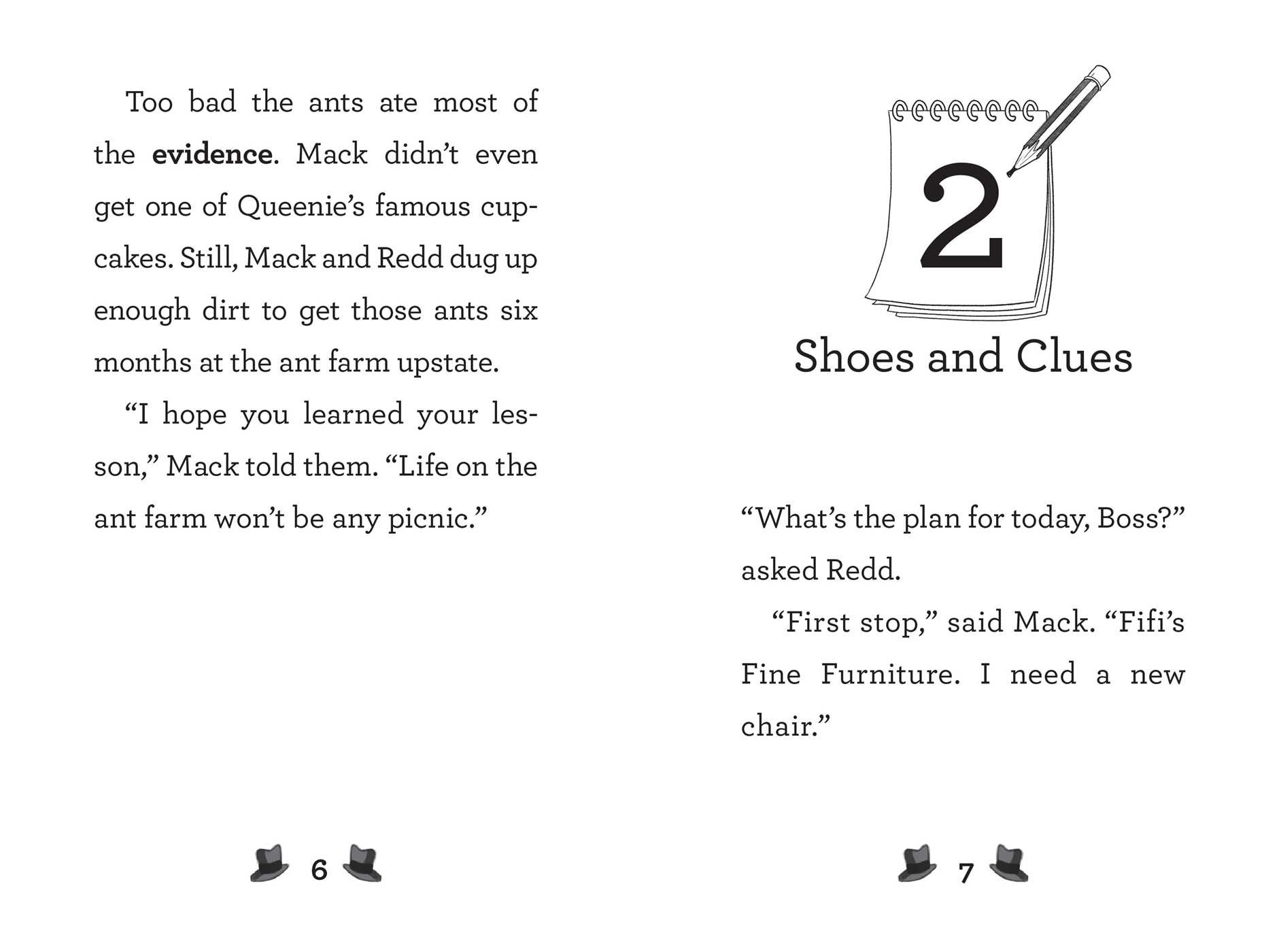 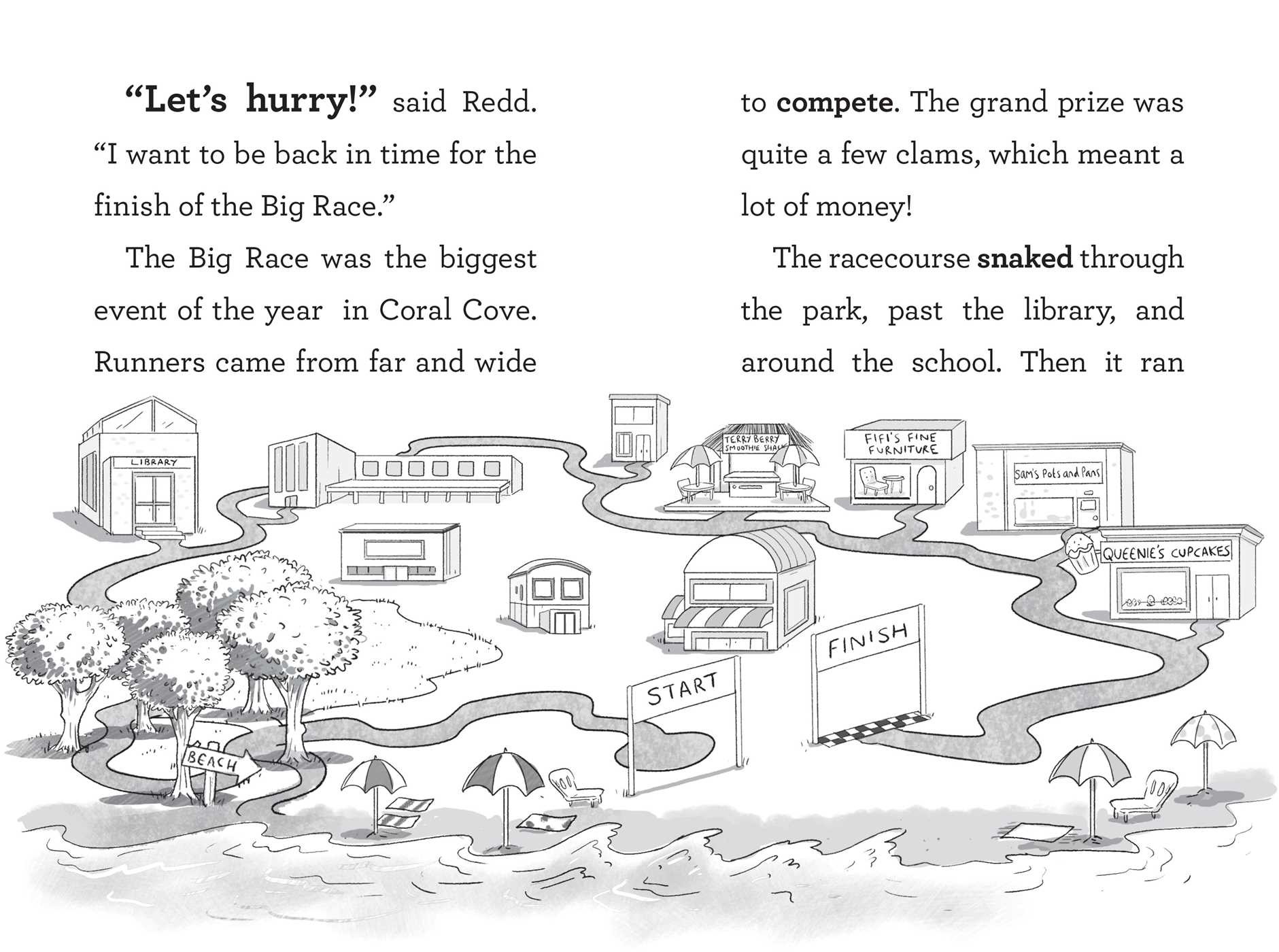 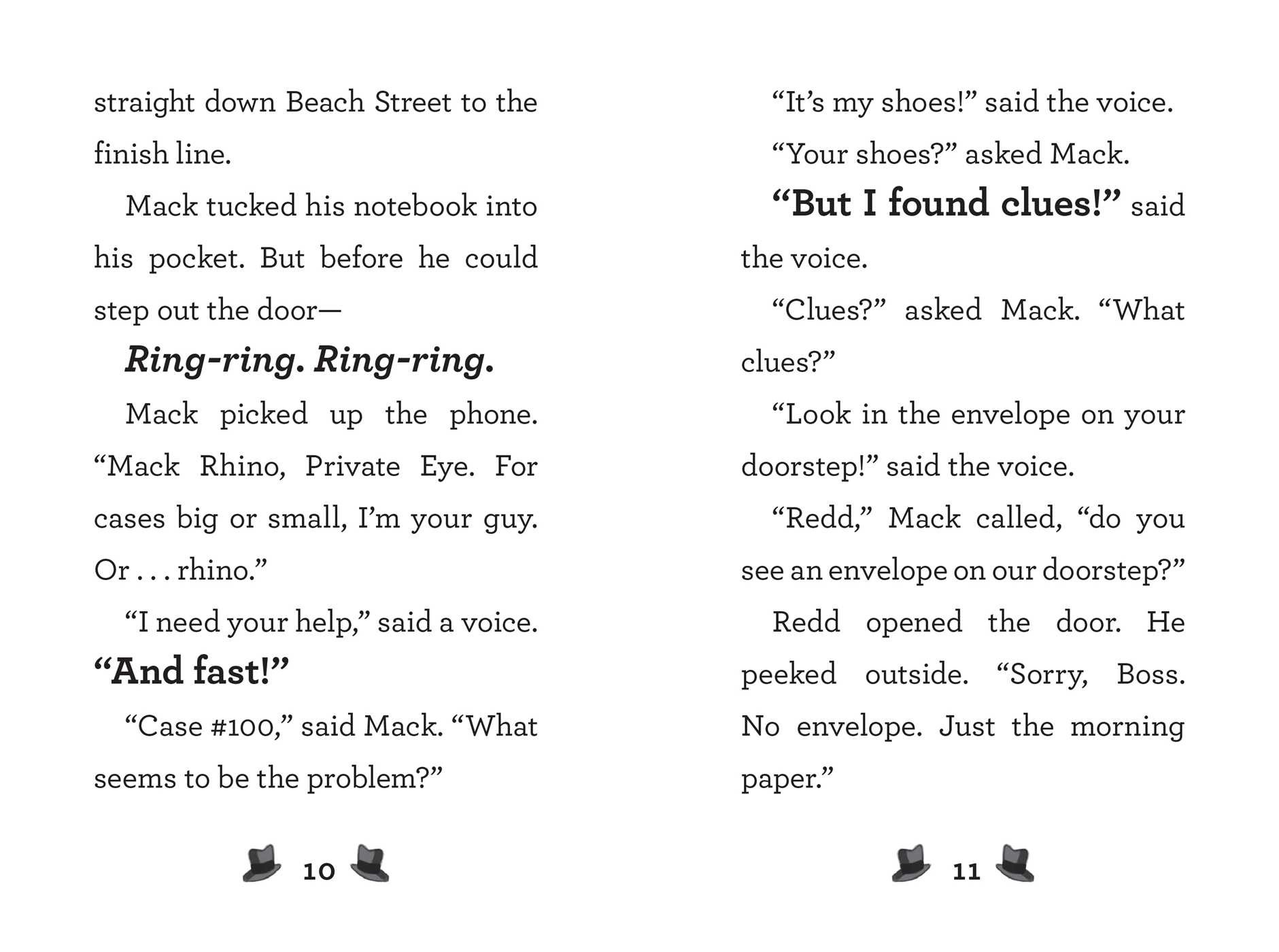 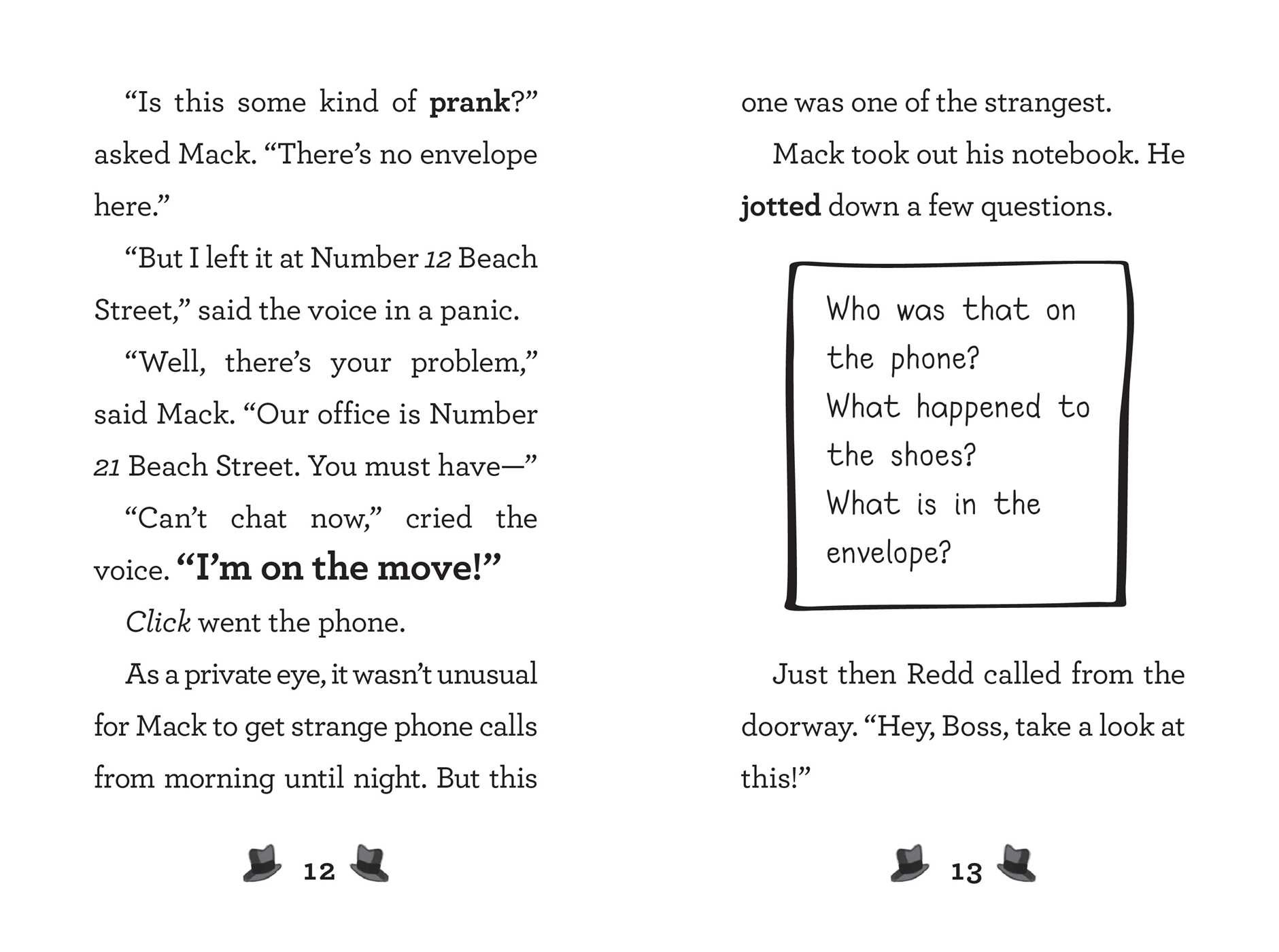 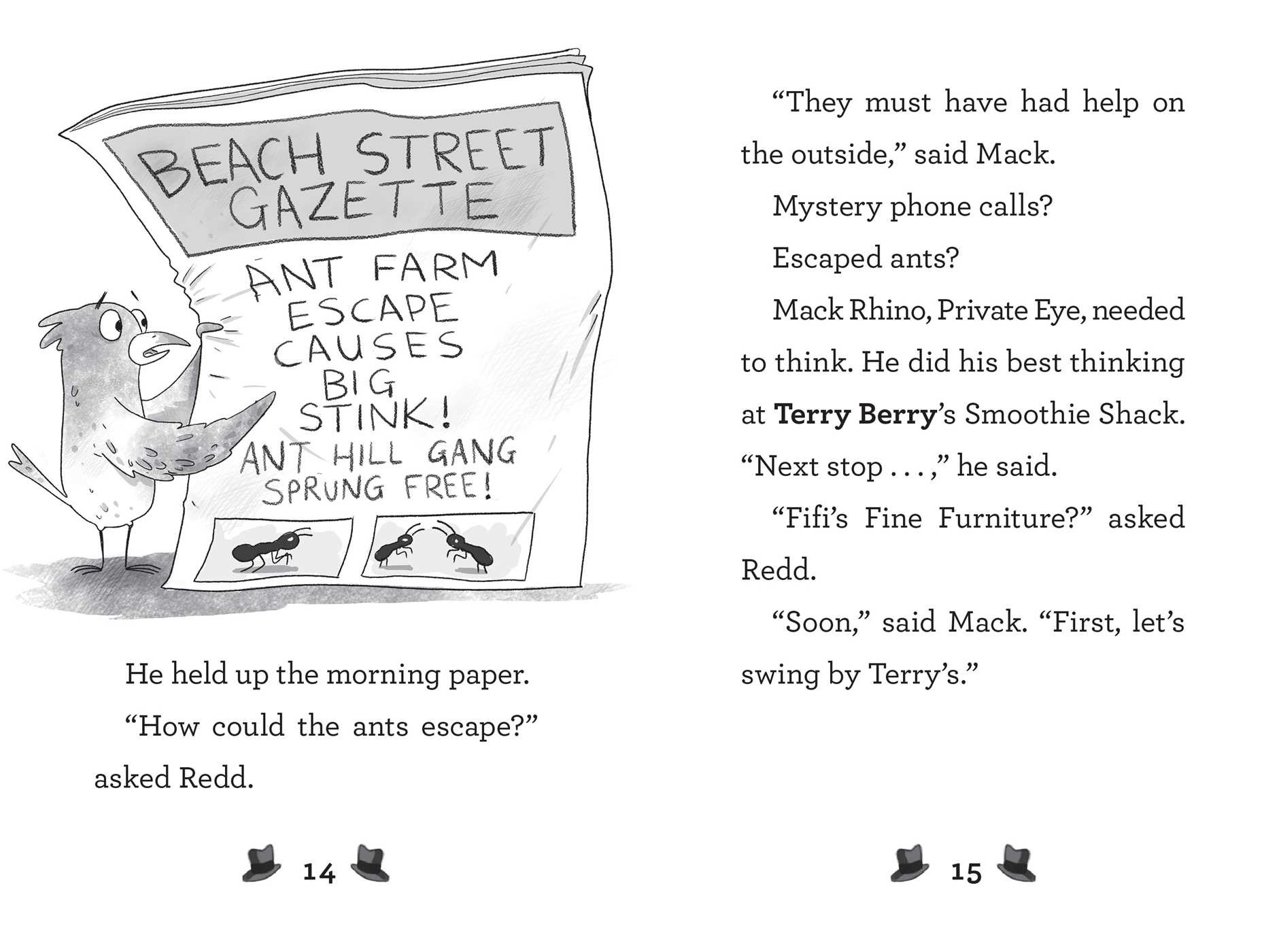 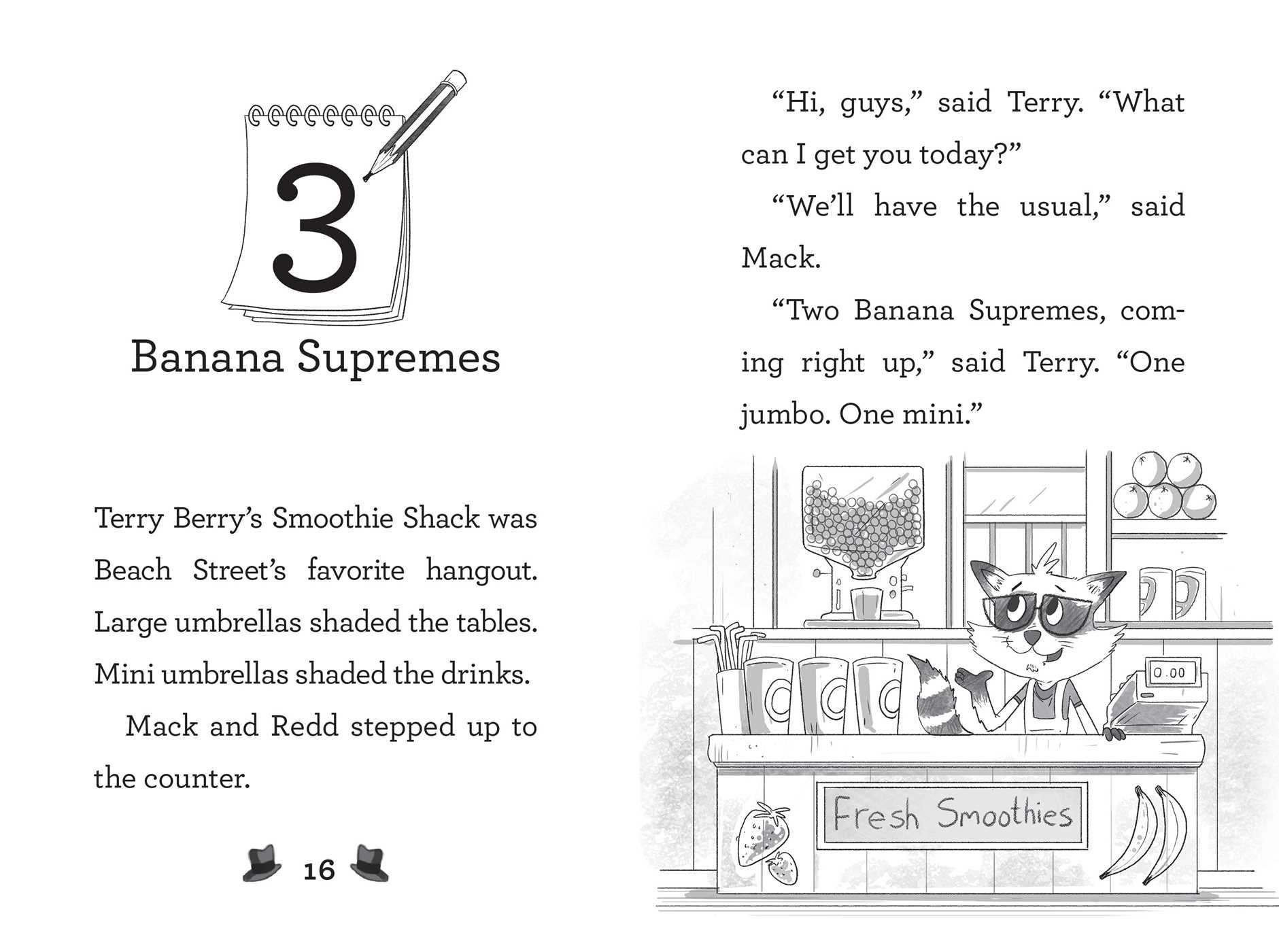 Mack Rhino is a private detective—who just so happens to be a rhinoceros—in this silly, fun-to-read Aladdin QUIX chapter book that’s perfect for emerging readers!

Mack Rhino is a private eye who has just finished solving his 99th case. With his trusty sidekick, Redd Oxpeck by his side (or on his back) he’s about to embark on his 100th. There’s a big race in town, but all the runners are missing the laces to their sneakers! Who’s run off with the goods, and why?

Chapter 1: Crash! Crash!
Snug in his office at Number 21 Beach Street, Mack Rhino, Private Eye, rolled up the blinds and rolled up his sleeves.

For cases big or small, Mack Rhino, Private Eye, was your guy.

Mack poured himself a mug of chocolate milk. He took out his notebook. He reviewed his list.

He sat down to start his day.

For the third time that month, Mack Rhino had squashed his desk chair.

Mack picked up his notebook. He added this to his list:

In spite of the broken chair, Mack was in a good mood. He and Redd had just solved their ninety-ninth case.

Case #99—A Picnic Fit for a Queenie—was a real humdinger.

A fancy picnic had been stolen from Queenie Zee, owner of Queenie’s Cupcakes.

Mack and Redd only had a few crumbs to go by, but they didn’t have to look far. This case had the Ant Hill Gang written all over it.

Too bad the ants ate most of the evidence. Mack didn’t even get one of Queenie’s famous cupcakes. Still, Mack and Redd dug up enough dirt to get those ants six months at the ant farm upstate.

“I hope you learned your lesson,” Mack told them. “Life on the ant farm won’t be any picnic.”

Paul DuBois Jacobs and Jennifer Swender are a husband and wife writing team, authors of many books for children, including the Animal Inn series, Count on the Subway, My Subway Ride, and My Taxi Ride. Paul has also cowritten four books with legendary folk musician, Pete Seeger, including Abiyoyo Returns and The Deaf Musicians. Paul and Jennifer have appeared at Lincoln Center, the Children’s Museum of Manhattan, Brooklyn Botanic Garden, the Virginia Festival of the Book, as well as countless schools, libraries, and museums. They live in Massachusetts. 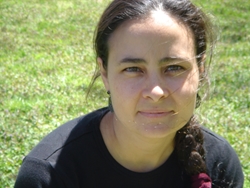 Karl West is a freelance illustrator, doodler, and full-time coffee drinker. He produces both traditional and digital work from his studio in Dorset, England.