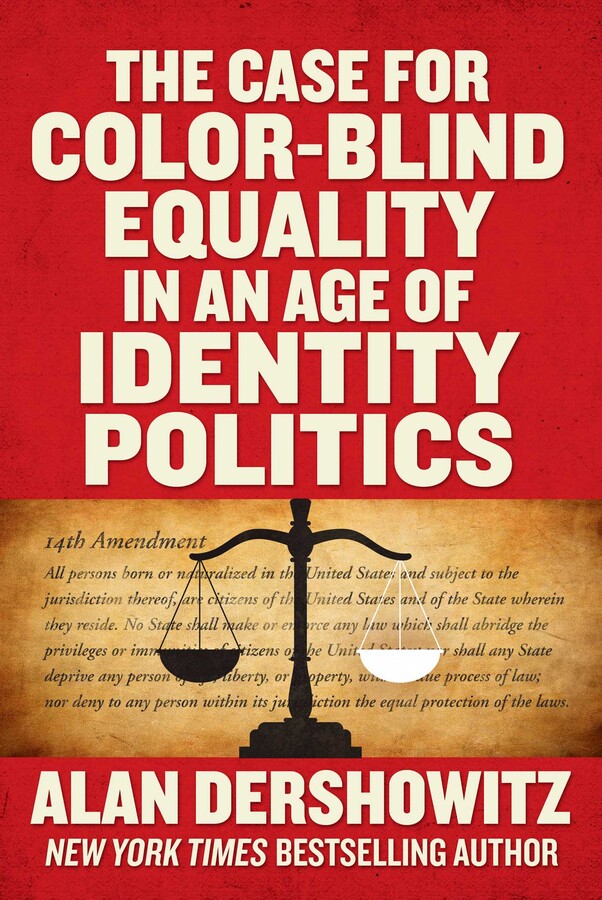 In The Case for Color-Blind Equality in an Age of Identity Politics​, Alan Dershowitz—New York Times bestselling author and one of America’s most respected legal scholars—analyzes the current battles over issues of diversity and our rapidly changing ideas about what true diversity is.

Alan Dershowitz has been called “one of the most prominent and consistent defenders of civil liberties in America” by Politico and “the nation’s most peripatetic civil liberties lawyer and one of its most distinguished defenders of individual rights” by Newsweek. He is also a fair-minded and even-handed expert on civil liberties and constitutional rights, and in this book offers his knowledge and insight to help readers understand the war being waged against meritocracy and equal protection of the law by so-called progressive advocates.

The Case for Color-Blind Equality in an Age of Identity Politics is an analysis of every aspect of the current fight against true diversity—diversity of philosophy, background, and opinion, rather than the more surface-level diversity of race, religion, and location. It examines the United States’s history of systemic racism, debates about affirmative action, and ongoing reckoning with issues of bigotry against groups such as Asians, Blacks, and Jews, with an eye toward fairly balancing the concerns of a diverse populace.

In the end, The Case for Color-Blind Equality in an Age of Identity Politics represents an icon in American law and politics exploring the current rapidly changing attitudes toward meritocracy, personal identity, and the preservation of civil liberties for all citizens, regardless of background, race, class, or creed. It is essential reading for anyone interested in or concerned about identity politics, racial issues, and true diversity and fairness in America.

“Alan Dershowitz is a living profile in courage.” —Steve Forbes

“The truth has no greater defender than Alan Dershowitz.”—Benjamin Netanyahu

“There are great legal minds; there are those who can also communicate well on television; then there is Dershowitz. The professor is uniquely capable of arguing a position, while putting a premium on legal and ethical legitimacy, not its popularity. Bravo, Dershowitz!”—Chris Cuomo, Anchor and Reporter, Cnn

“Anyone interested in the true merits of criminal law and very fine writing must read Alan Dershowitz’s book.”—Truman Capote

“Love him or hate him, Dershowitz has lived a life that matters, hugely and enduringly. He is a man in full at a time when most of us aspire to be little more than a presence on Twitter.”—New York Times Book Review

“Courage and principle are rare today. Professor Dershowitz has them both.”—Senator Ted Cruz

"Alan Dershowitz's commitment to free speech, fundamental fairness, and an open culture of freedom of expression has made him the scourge of both censors and double standards. He understands deeply that those who seek to silence others, either through governmental acts or a revival of McCarthy-era blacklists, are removing the protections of liberty on which all of us depend for our future freedom."—Alan Charles Kors, Henry Charles Lea Professor Emeritus of History, University of Pennsylvania
"Alan Dershowitz has been the most prominent First Amendment absolutist since the death of Justice Hugo Black in 1971. Defending speech that he disagrees with, and speakers whose views he abhors, is for Dershowitz not just a theoretical construct; it is a life passion. He understands, as few do today, that ceding to the government the power to censor "bad" speech will quickly devolve into censorship of all speech those in power disagree with, destroying democracy as we know it. This book is a timely warning from the last great defender of Free Speech in America that we are well on the way to that unhappy result. We ignore it at our peril."—Alex Kozinski, Chief Judge of the Ninth Circuit Emeritus (Retired)

SEE ALL
See more by Alan Dershowitz
Thank you for signing up, fellow book lover!