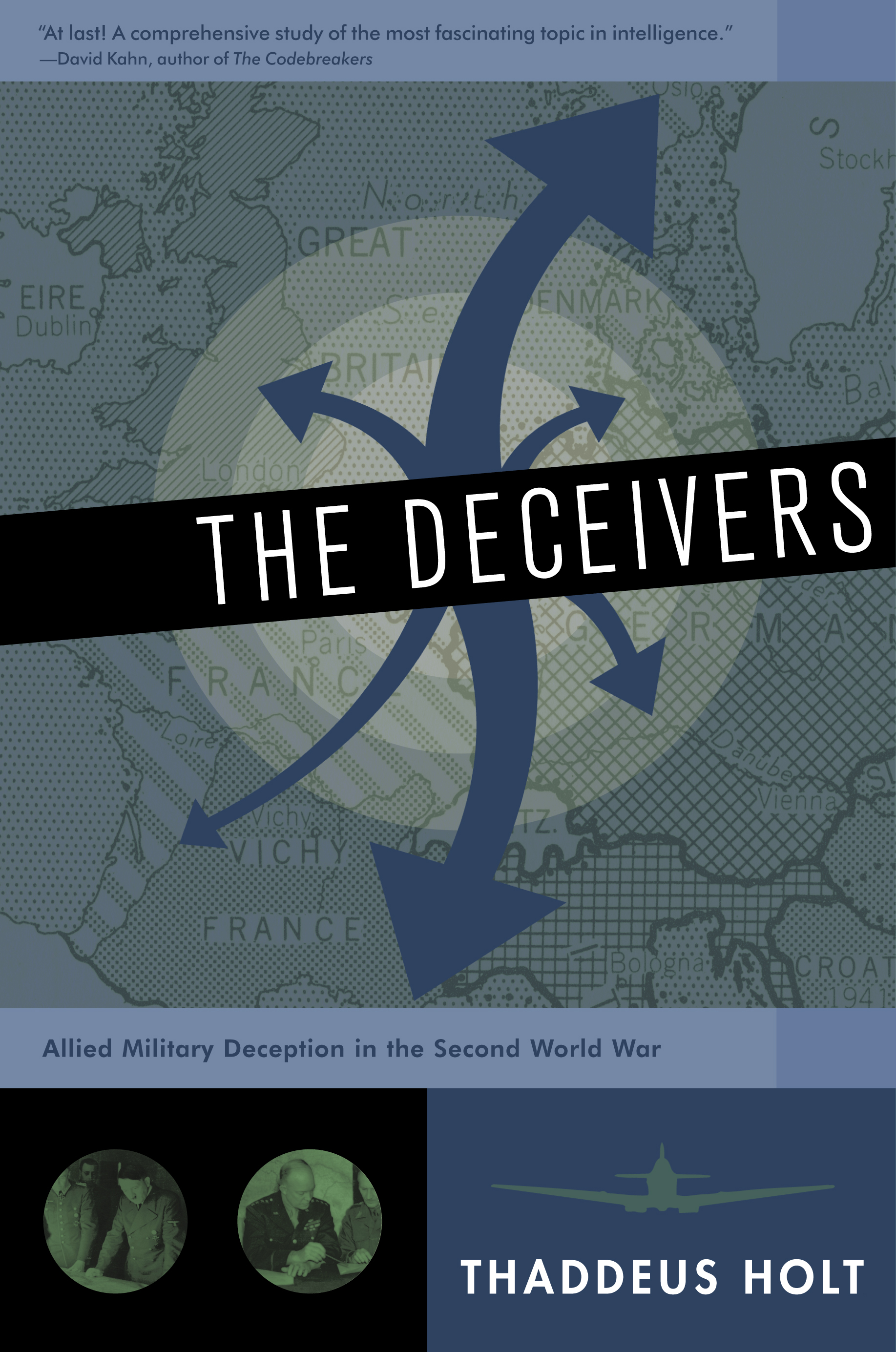 In World War II, the Allies employed unprecedented methods and practiced the most successful military deception ever seen, meticulously feeding misinformation to Axis intelligence to lead Axis commanders into erroneous action. Thaddeus Holt's elegantly written and comprehensive book is the first to tell the full story behind these operations. Exactly how the Allies engaged in strategic deception has remained secret for decades. Now, with the help of newly declassified material, Holt reveals this secret to the world in a riveting work of historical scholarship.

Once the Americans joined the war in 1941, they had much to learn from their British counterparts, who had been honing their deception skills for years. As the war progressed, the British took charge of misinformation efforts in the European theater, while the Americans focused on the Pacific. The Deceivers takes readers from the early British achievements in the Middle East and Europe at the beginning of the war to the massive Allied success of D-Day, American victory in the Pacific theater, and the war's culmination on the brink of an invasion of Japan.

Colonel John Bevan, who managed British deception operations from London, described the three essentials to strategic deception as good plans, double agents, and codebreaking, and The Deceivers covers each of these aspects in minute detail. Holt brings to life the little-known men, British and American, who ran Allied deception, such as Bevan, Dudley Clarke, Peter Fleming, Douglas Fairbanks, Jr., and Newman Smith. He tracks the development of deception techniques and tells the hitherto unknown story of double agent management and other deception through the American FBI and Joint Security Control.

Full of fascinating sources and astounding revelations, The Deceivers is an indispensable volume and an unparalleled contribution to World War II literature.

Thaddeus Holt is a lawyer, focusing primarily on litigation and administrative law. He served as Deputy Under Secretary of the Army from 1965 to 1967. His articles and book reviews have appeared in MHQ, The New York Times, The Journal of Military History, Virginia Quarterly Review, and various anthologies. He lives in Alabama.

Joseph S. Nye, Jr. Dean of the Kennedy School of Government, Harvard University Thad Holt has written a brilliant account of Allied military deceptions in World War II. It will become a standard work on military intelligence tactics. And best of all, it reads like a novel!

Professor Sir Michael Howard former Regius Professor of Modern History, Oxford University, Robert A. Lovett Professor of Military and Naval History, Yale University, and author of British Intelligence in the Second World War: Volume 5, Strategic Deception Mr. Holt's history of Allied deception in World War II is definitive. He has trawled through all the documentation, interviewed all the survivors, and put together a history as comprehensive as it is readable and entertaining. It is an astonishing achievement, and no library of the war can afford to be without it.

R. James Woolsey Director of Central Intelligence, 1993-95 Thaddeus Holt has given us a riveting history of the Allied deception operations in World War II. The British were especially masterful -- the sphinxlike and sardonic Dudley Clarke and his colleagues had a huge hand in the victory. Far more dramatic than any fiction.

Robert Cowley founding editor of MHQ: The Quarterly Journal of Military History Just when you have convinced yourself that you have long ago imbibed the last word on the secret side of World War II, along comes Thaddeus Holt and his remarkable study. Superbly researched and full of fresh revelations, The Deceivers is not only immaculately written but wonderfully readable.

Nigel West author of MI5, MI6, and Seven Spies Who Changed the World A highly professional yet entertaining analysis of the dirty tricks ingeniously dreamed up by unscrupulous Allied intelligence personnel in World War II to defeat the enemy. Easily the best book yet written, or ever likely to be, on the subject, drawing on the most recent documents declassified on both sides of the Atlantic.

Ernest May Charles Warren Professor of History, Harvard University A truly wonderful book! Deeply researched and written with authority and verve, it tells the full story of Allied deception during World War II. The Deceivers not only recounts every major operation, it describes in detail how each operation affected the enemy. It will be essential for the bookshelf of every serious student of World War II.

The Sewanee Review, Winter 2004 Thaddeus Holt's The Deceivers is an important contribution...the least that can be said about the book is that for the next several decades it should serve intelligence and defense communities as a bible about how to deceive an enemy in wartime....The finished product is as close to definitive as we are likely to see....Holt's narrative line will hold the reader's attention, carrying him through the occasional dense patches to leave him astounded by the end result. Invariably that result is a much more thorough knowledge for any reader about what was actually taking place at any particular moment during World War II.

The Washington Post [A] monumental history. Holt fully reveals Allied attempts to "mystify, mislead, and surprise" the enemy, while identifying the intelligence failures, the successes and the many operations whose decisiveness remains unclear even today. The level of detail is staggering. Holt has provided us with a historical record. And this he does this definitively.