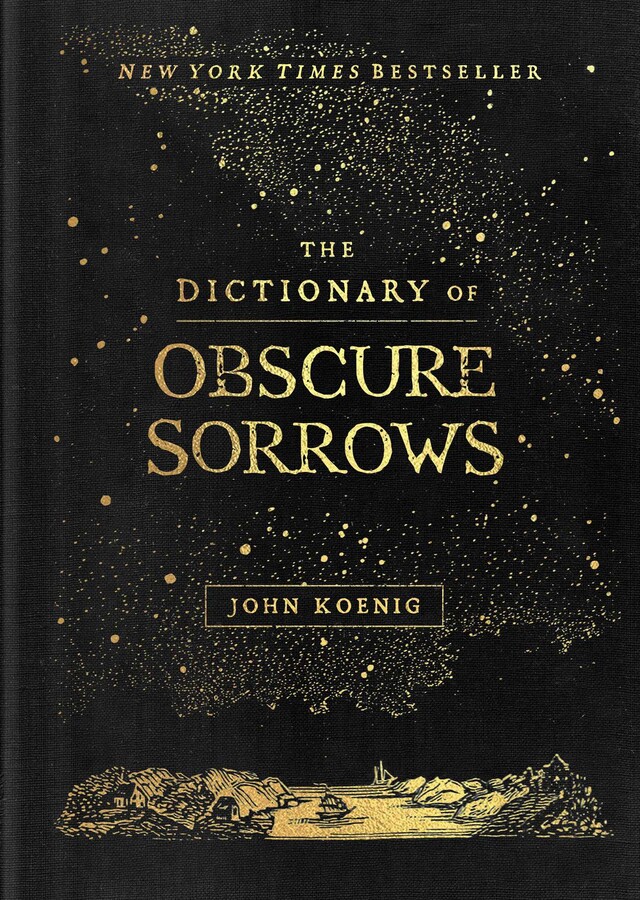 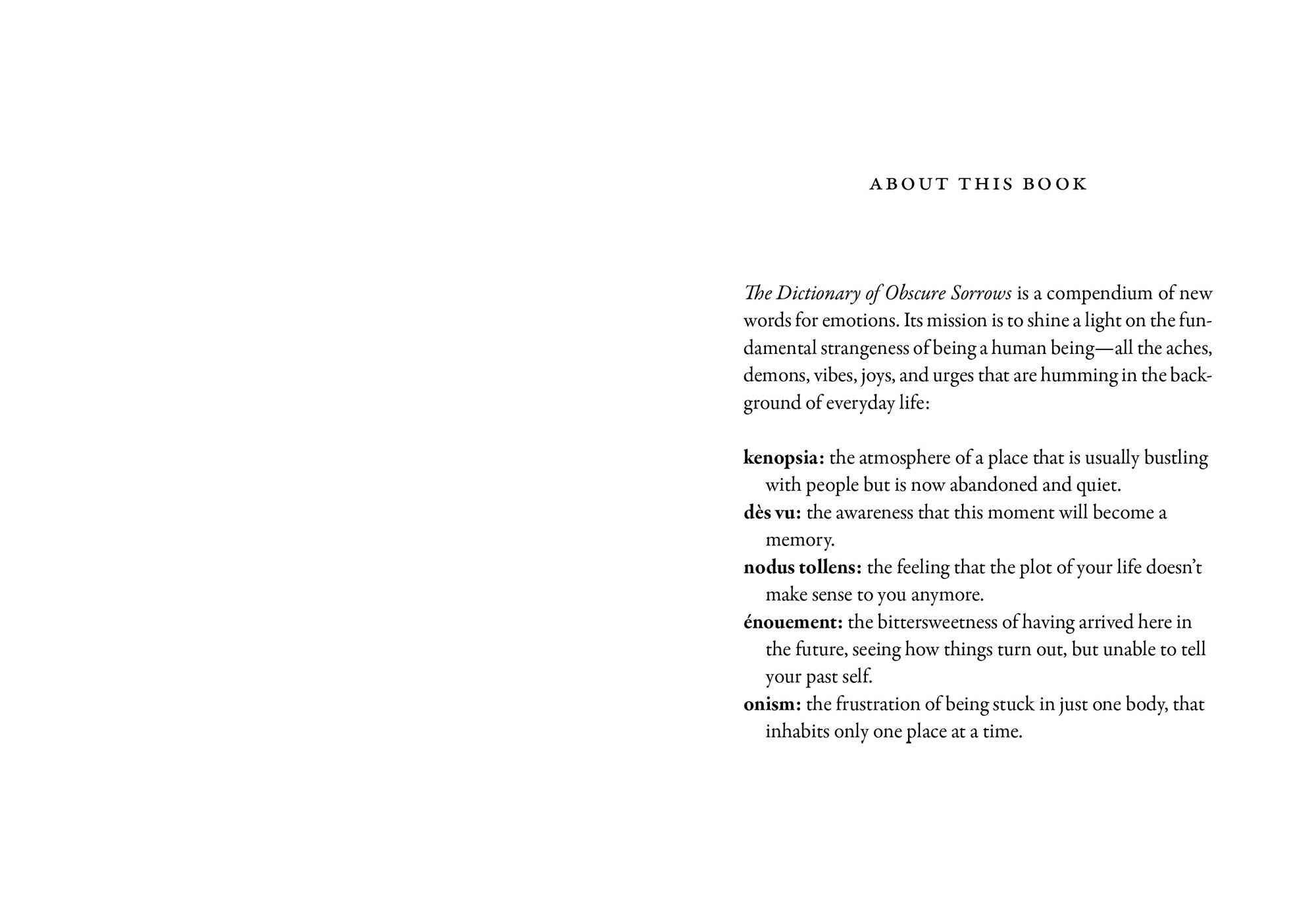 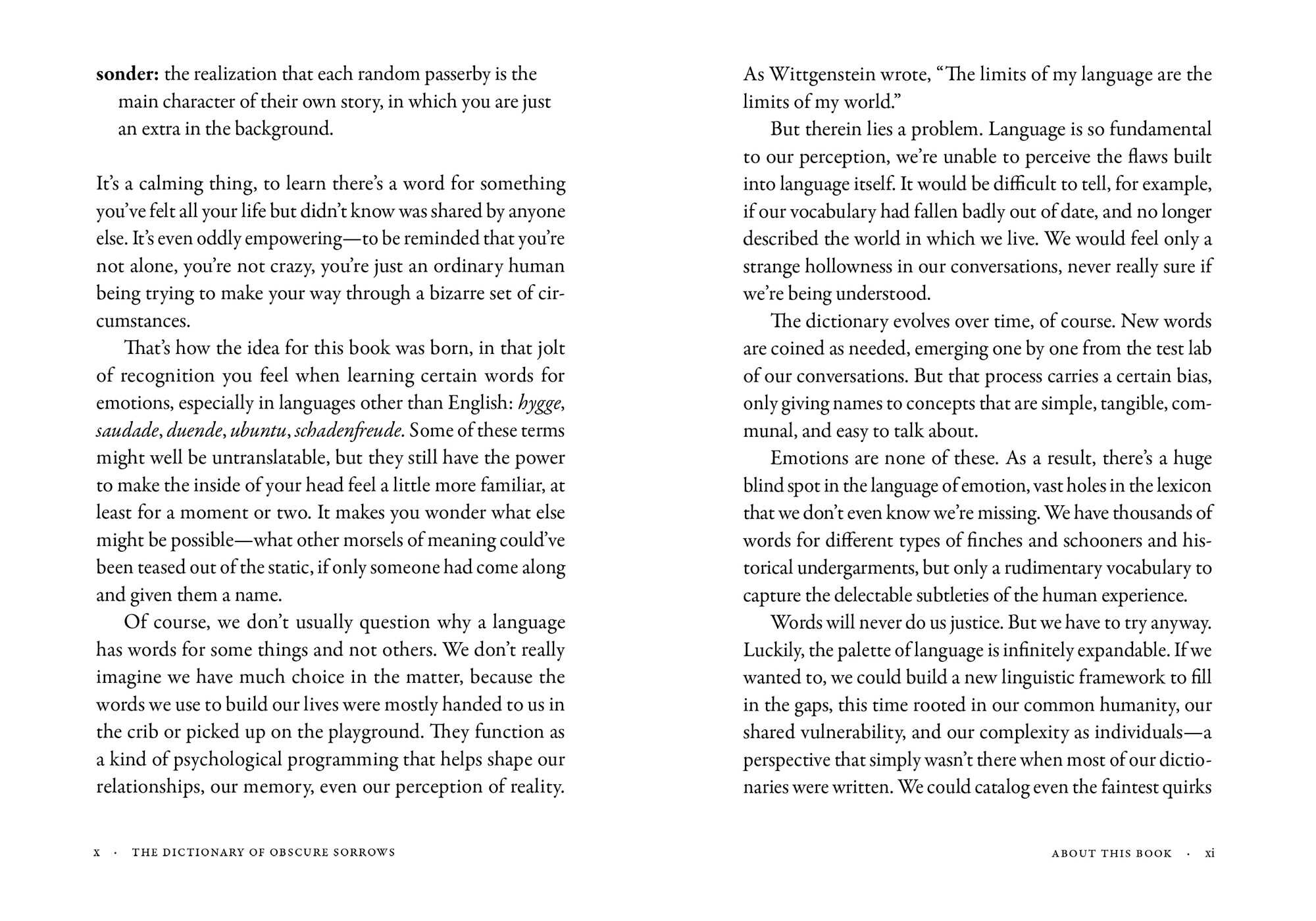 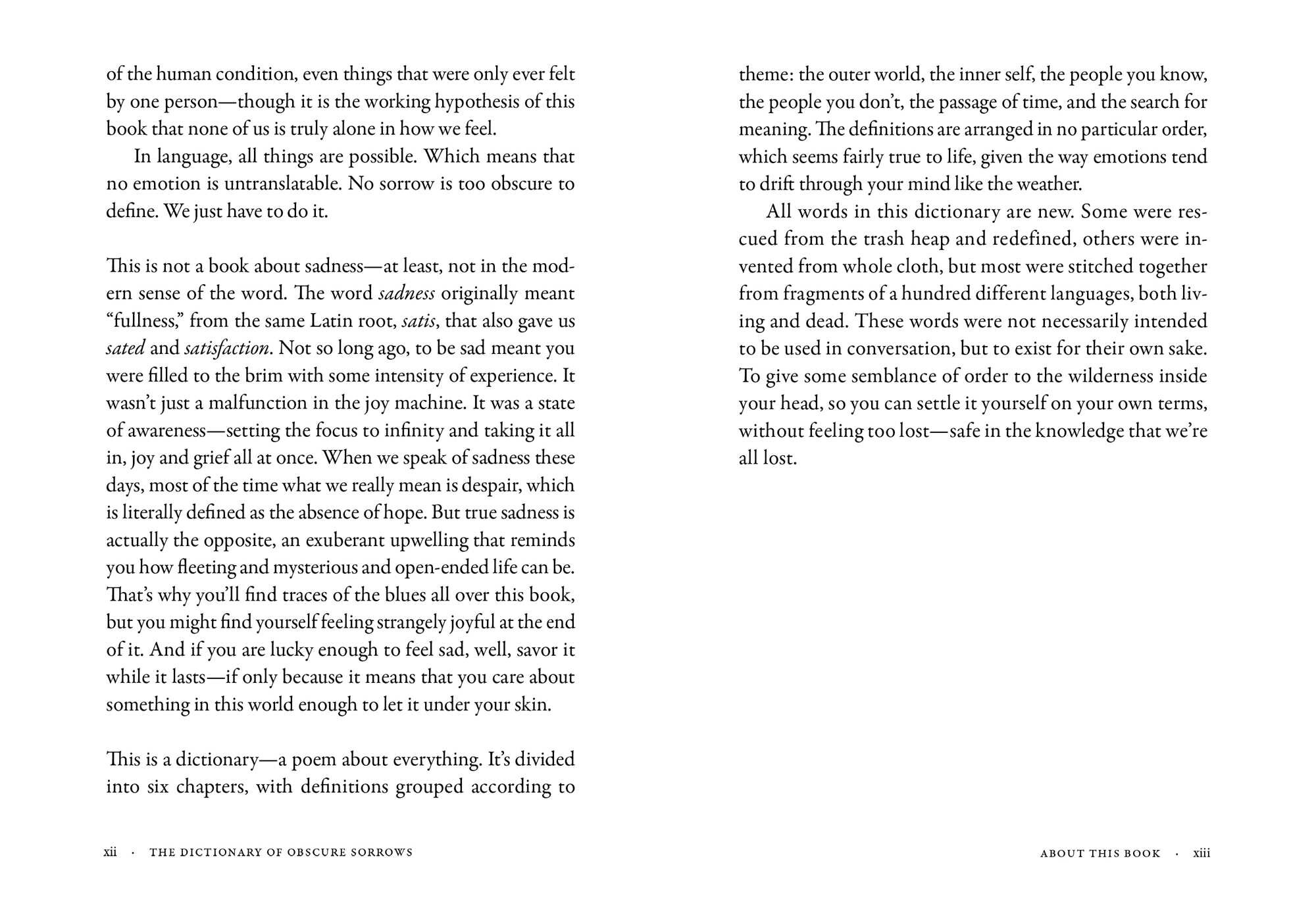 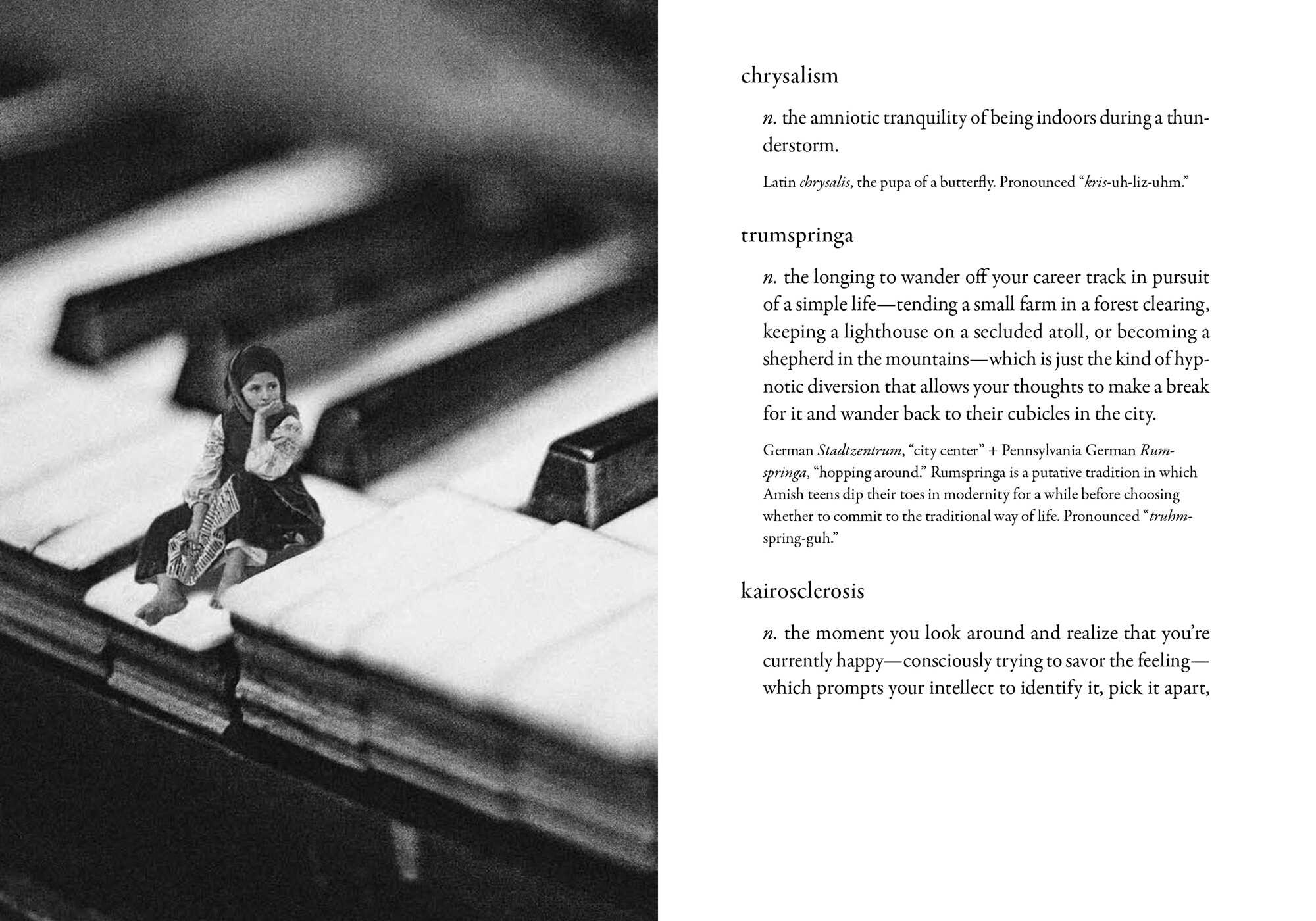 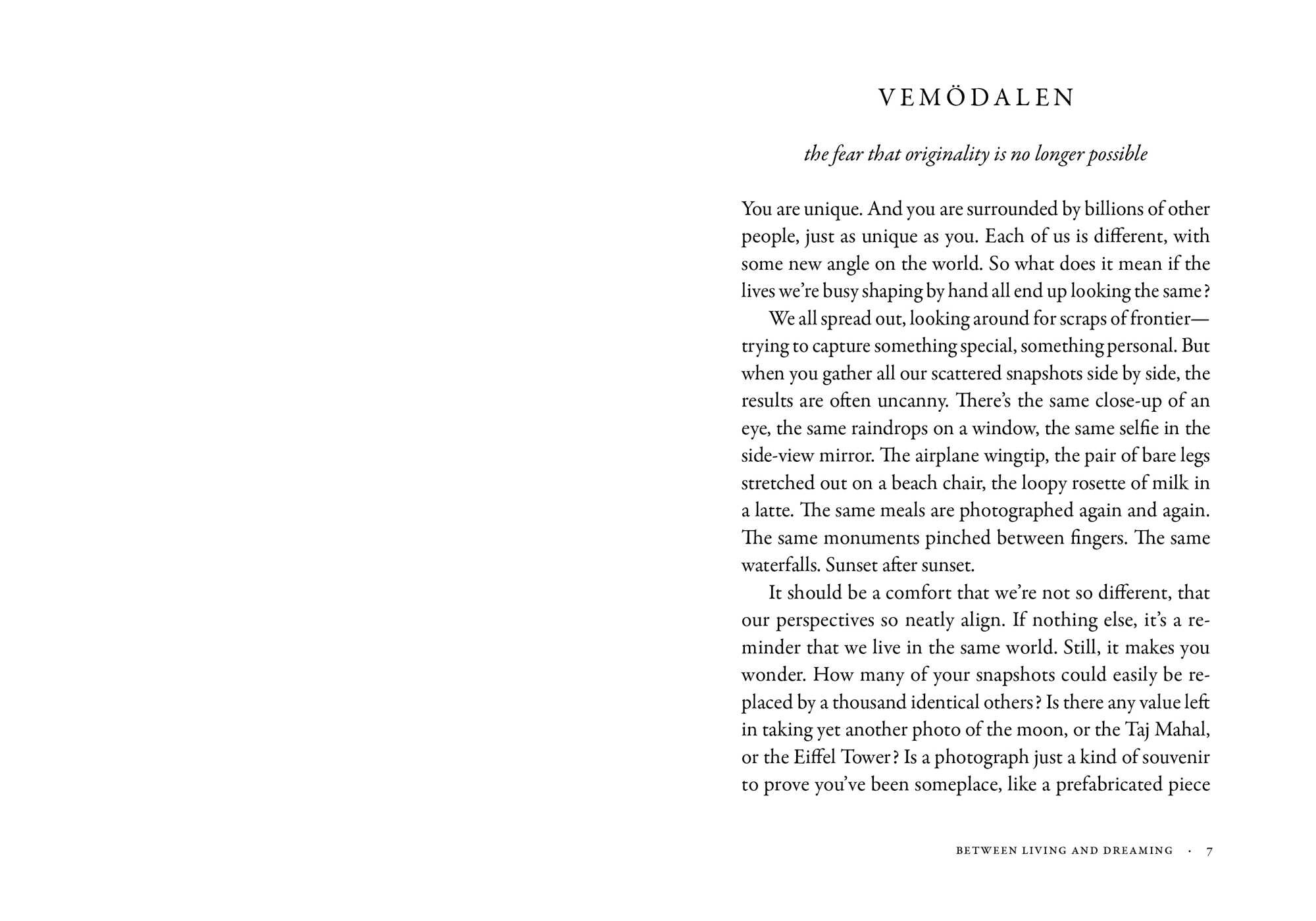 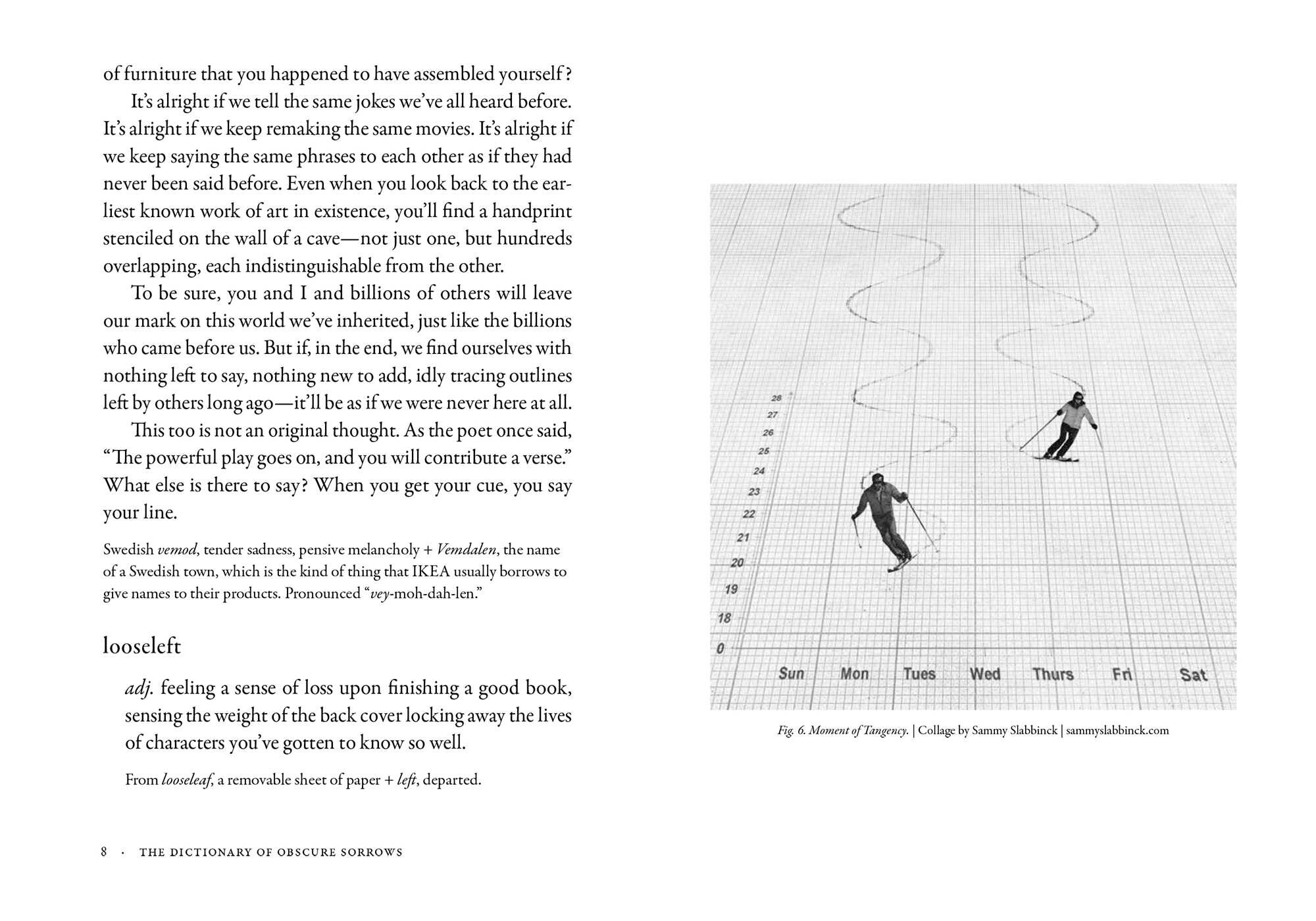 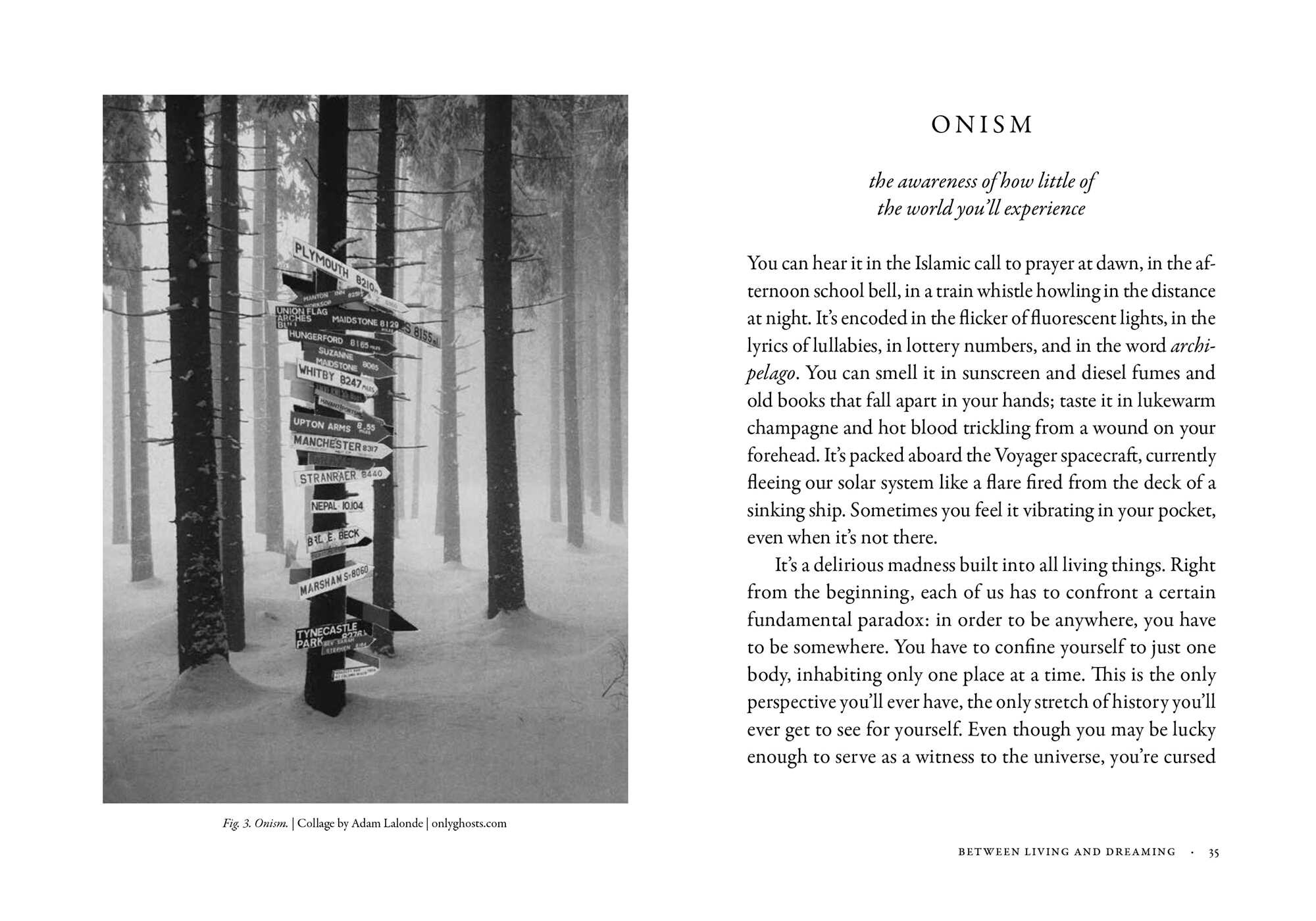 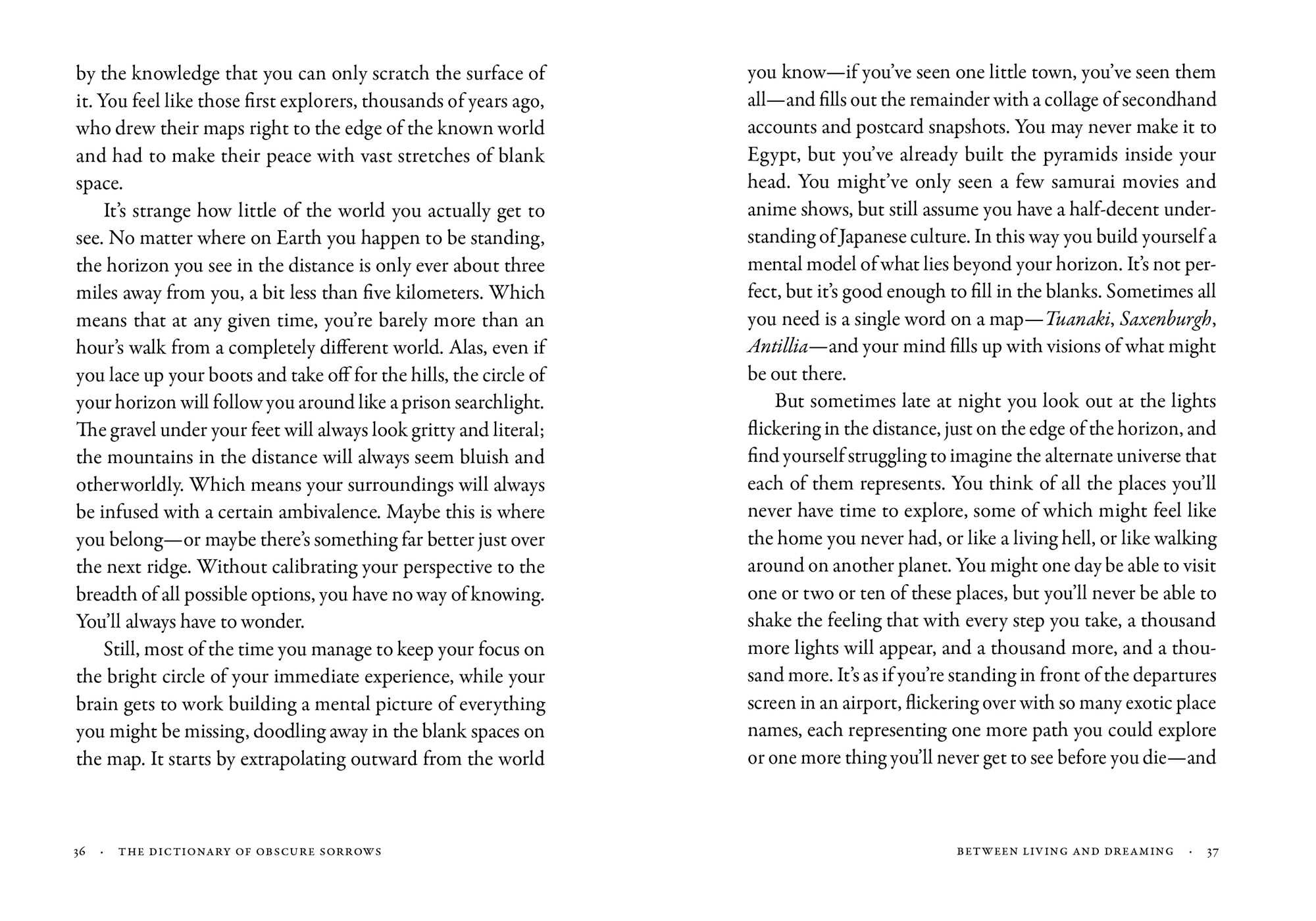 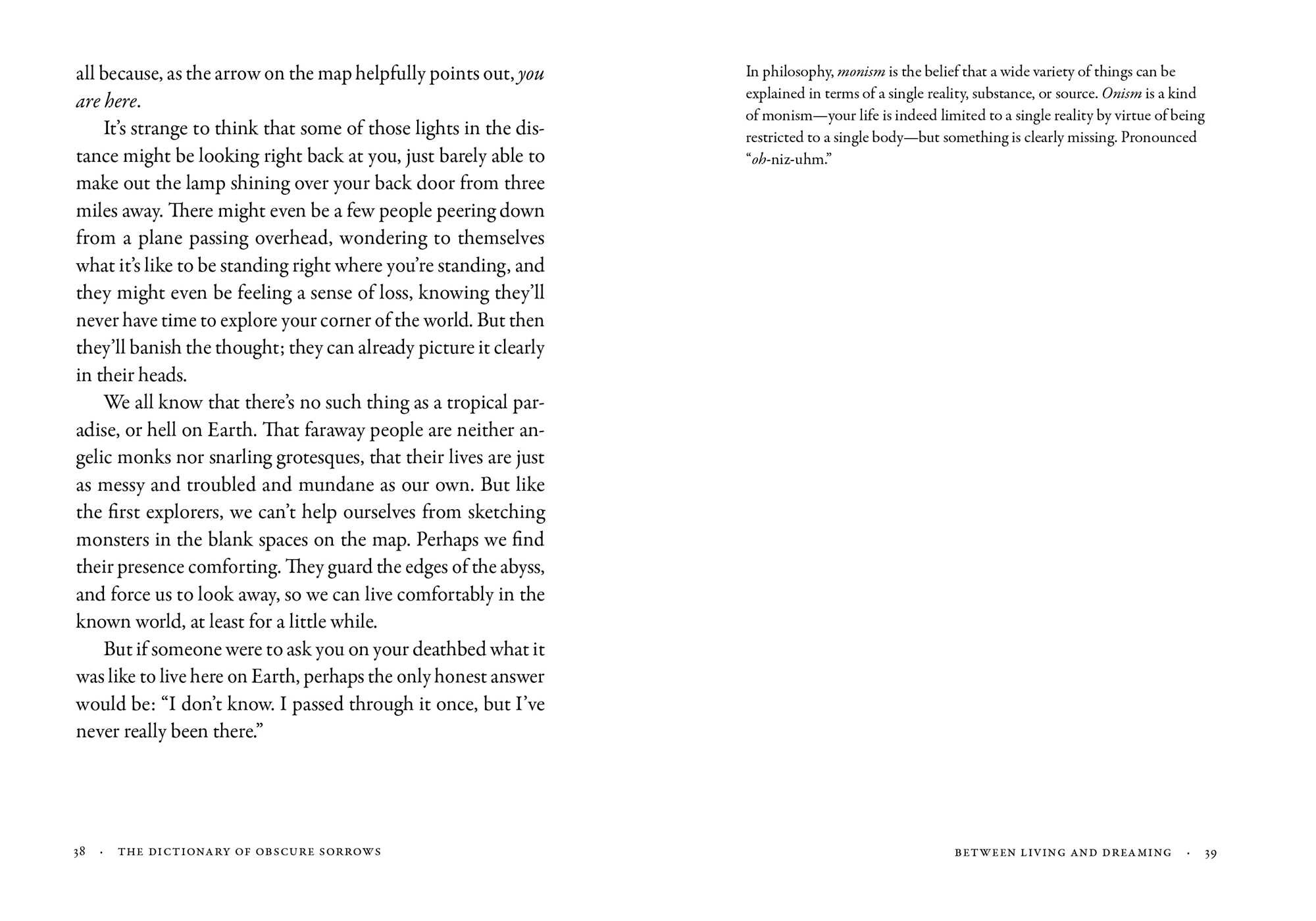 The Dictionary of Obscure Sorrows

A truly original book in every sense of the word, The Dictionary of Obscure Sorrows poetically defines emotions that we all feel but don’t have the words to express, until now—from the creator of the popular online project of the same name.

Have you ever wondered about the lives of each person you pass on the street, realizing that everyone is the main character in their own story, each living a life as vivid and complex as your own? That feeling has a name: “sonder.” Or maybe you’ve watched a thunderstorm roll in and felt a primal hunger for disaster, hoping it would shake up your life. That’s called “lachesism.” Or you were looking through old photos and felt a pang of nostalgia for a time you’ve never actually experienced. That’s “anemoia.”

If you’ve never heard of these terms before, that’s because they didn’t exist until John Koenig began his epic quest to fill the gaps in the language of emotion. Born as a website in 2009, The Dictionary of Obscure Sorrows has garnered widespread critical acclaim, inspired TED talks, album titles, cocktails, and even tattoos. The Dictionary of Obscure Sorrows “creates beautiful new words that we need but do not yet have,” says John Green, bestselling author of The Fault in Our Stars.

By turns poignant, funny, and mind-bending, the definitions include whimsical etymologies drawn from languages around the world, interspersed with otherworldly collages and lyrical essays that explore forgotten corners of the human condition—from “astrophe,” the longing to explore beyond the planet Earth, to “zenosyne,” the sense that time keeps getting faster.

The Dictionary of Obscure Sorrows is for anyone who enjoys a shift in perspective, pondering the ineffable feelings that make up our lives, which have far more in common than we think. With a gorgeous package and beautifully illustrated throughout, this is the perfect gift for creatives, word nerds, and people everywhere.

John Koenig is a video maker, voice actor, graphic designer, and writer. Born in Idaho and raised in Geneva, Switzerland, he created The Dictionary of Obscure Sorrows in 2009, first as a blog at DictionaryofObscureSorrows.com before expanding the project to YouTube. He lives in Minneapolis with his wife and daughter.

PRAISE FOR THE DICTIONARY OF OBSCURE SORROWS AND JOHN KOENIG

"Creates beautiful new words that we need but do not yet have."—John Green, New York Times bestselling author of The Fault in Our Stars

“These aren’t real words, but if crysalism and ellipsism don’t perfectly sound like their meanings, I don’t know what other words would.”—George Takei

“Its existence feels almost otherworldly, like spells from the mind of J.K. Rowling.”—Upworthy

“If you’ve been waiting for your daily dose of beautiful, The Dictionary of Obscure Sorrows is going to do the trick for you. The site is a collection of madeup words that perfectly describe some of the most profound feelings human beings are capable of experiencing; words that for whatever reason have not yet been defined by any one term. You may find yourself nodding your head in a meditative state of quiet relation and subtle reverence the longer you scroll down the page. In short, this man’s mind is beautiful.” —Bustle

“Words have the power to transform and make us see the world through a different lens. YouTube host Koenig connects the seemingly unconnectable feelings we as humans experience on a daily basis and puts words to them. Koenig brilliantly finds a way to show, in his new words and their definitions, how we connect to ourselves and one another through feelings and emotions.” —BoDean Warnock, Booklist

"A beautiful little book…Whatever the half-baked, unfinished, yet-to-be-articulated emotion tumbling around in your brain, this book will find a way to name it. Koenig has a cunning ability to parse out emotions in a very specific way and pin them down into actual articulation, both in the word he creates itself and its poetic definition and etymology. There is joy to be found in every nook and cranny of this book.”
—Michigan Daily Review

The Dictionary of Obscure Sorrows