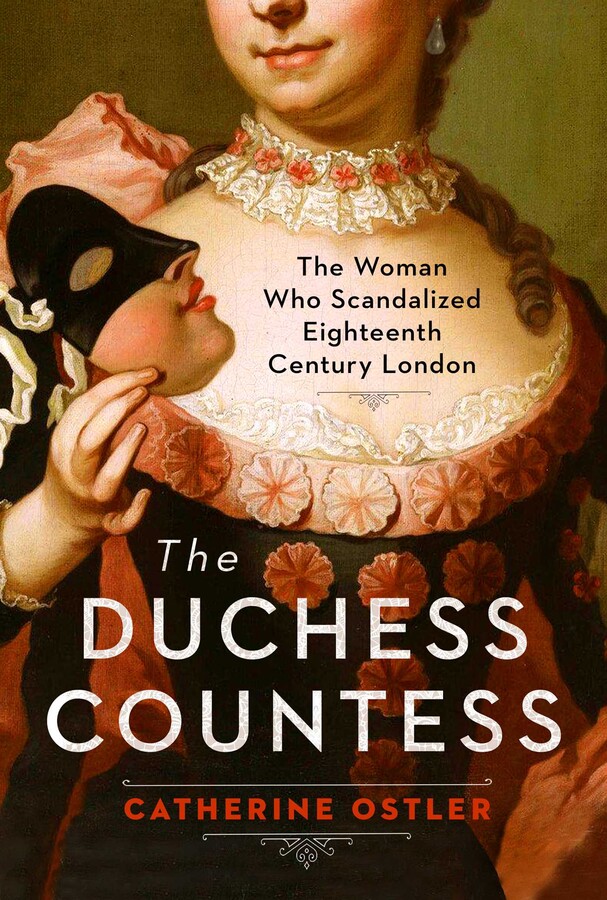 This “funny, intelligent, witty, profound” (Andrew Roberts, New York Times bestselling author) look at the stylish and scandalous Elizabeth Chudleigh, Duchess of Kingston—a woman whose adventurous life led to an infamous bigamy trial that was bigger news in British society than the American War of Independence—provides a clear-eyed and fascinating look into the sumptuous Georgian Era.

As maid of honor to the Princess of Wales, Elizabeth Chudleigh enjoyed a luxurious life in the inner circle of the Hanoverian court. With her extraordinary style and engaging wit, she both delighted and scandalized the press and public. She would later even inspire William Thackeray when he was writing his classic Vanity Fair, providing the inspiration for the alluring social climber Becky Sharp. But Elizabeth’s real story is more complex and surprising than anything out of fiction.

A clandestine, candlelit wedding to the young heir to an earldom, a second marriage to a duke, a lust for diamonds, and an electrifying appearance at a masquerade ball in a gossamer dress—it’s no wonder that Elizabeth’s eventual trial was a sensation. Charged with bigamy, an accusation she vehemently fought against, Elizabeth refused to submit to public humiliation and retire quietly.

Perfect for fans of The Duchess and Women of Means, this long overdue and evocative biography reappraises Elizabeth’s remarkable story, and out of the past comes an incredibly modern woman who defied society’s expectations of her.

Catherine Ostler is an author and journalist who has been editor-in-chief of Tatler, the Evening Standard magazine, and Editor of The Times Weekend. She has also written for a wide range of publications, including Vogue, Daily Mail (London), and Newsweek. She read English at Oxford University, specialising in eighteenth-century literature.

“What a superb, gripping, decadent, colorful biography that brings an extraordinary woman and a whole world blazingly to life. Filled new research, written so elegantly with empathy, passion and cool analysis, Duchess, Countess is an unforgettable, unputdownable read that seems both modern and historical, utterly relevant today - featuring a cast of characters from Marie Antoinette to Catherine the Great, but also the life of a woman who is both adventuress and victim, who achieved vast wealth and great notoriety, becoming one of Europe's most famous women and the star of the most scandalous court case of the century." —Simon Sebag Montefiore, author of New York Times bestseller The Romanovs

“Before there was Becky Sharp, there was Elizabeth Chudleigh, Duchess of Kingston and the greatest social grifter of them all. She lives once again, thanks to Catherine Ostler's captivating biography. Definitely dangerous to know, pretty bad and quite possibly mad, there's no better fun to be had than a ringside seat at the tragi-comic circus that was her life.” —Amanda Foreman, author of Georgiana, Duchess of Devonshire

“Although this book is a beautifully written and deeply researched life of one of the most remarkable women of the eighteenth century, it is also a scintillating portrait of an age. Since Elizabeth Chudleigh knew so many of Europe’s most talented, fascinating and important people – as well as its most dissipated rakes – the book is populated by as wide a galere of personalities as one is ever likely to meet in a biography. The author has ransacked every archive and visited every place connected with her subject from London to St Petersburg, and the result is the first ever fair-minded estimation of one of the great adventuresses of history. Funny, intelligent, witty, profound and on occasion moving, this book sets a new standard for eighteenth-century biography writing.” —Andrew Roberts, author of Churchill: Walking with Destiny

“Fascinating. Magnificent. Sensitively told. Complex, capricious, beautiful and boldly ambitious, Elizabeth Chudleigh was also one of the most reviled women in Georgian England. In resurrecting her tale, Catherine Ostler allows the Duchess of Kingston to emerge from the prejudices of the past like a resplendent phoenix.” —Hallie Rubenhold, author of The Scandalous Lady W and Mistress of My Fate

“This is a scintillating story superbly told … [Ostler] has a remarkable ability to demonstrate her deep knowledge of the period without being boring or a show-off. She packs every paragraph with eye-opening detail, making you feel as though you’re living in the 18th century, but never veers from the central story of a woman trying to hold herself together in that vicious society while the men did as they pleased” —The Times (London)

“In this sparkling galivant through the 18th century…Ostler has her finger firmly on the pulse of the Georgian aristocracy, and has bracingly revived its extravagance and absurdity….The book also does an excellent job of shining a light on issues with thought-provoking modern relevance, highlighting the troubling power of the press and the glaring double standards that ground women to a halt while barely slowing down their brothers.”—BBC History Magazine

“The book’s spritely, wry tone is a pleasure to read throughout. In the early chapters, it felt cinematic almost to a fault: a quantity of costume and other visual detail that would make a historical adviser redundant on any screen adaptation.” —TLS